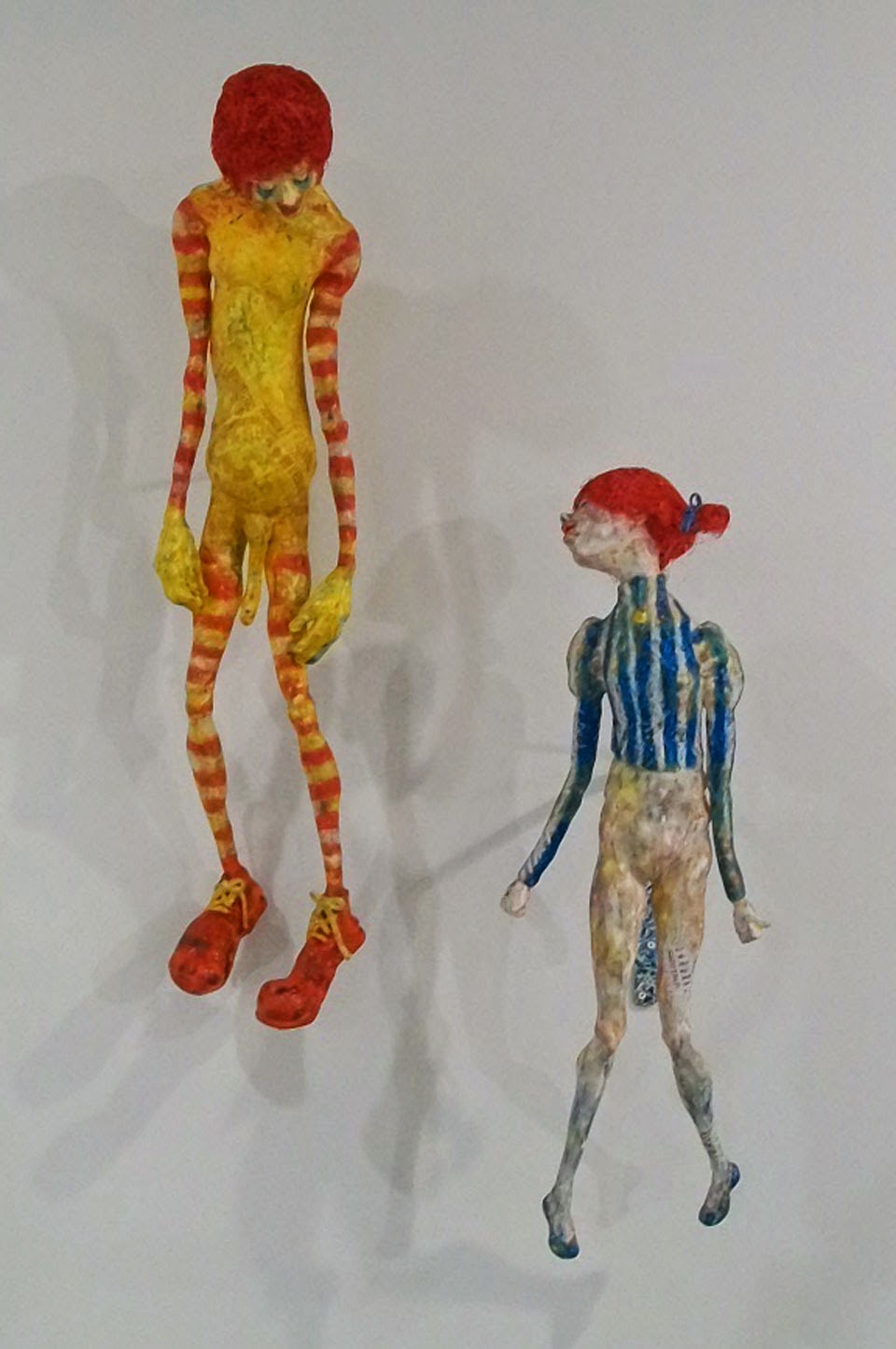 Spiritual fulfilment has often been represented by the union of the masculine and feminine.  The wandering, tormented male (Odysseus, Dante, Faust) symbolizes the desire for a higher-level life that overcomes the base and animalistic, while the perfect, pure or eternal feminine (Helen, Beatrice, Gretchen) represents the fulfilment to be obtained by that desire.  Mayu Shiomi seems to parody this hilariously at the current ISE Cultural Foundation group show.  To represent the male who desires perfection, she chooses Ronald McDonald. The eternal feminine becomes Wendy from the Wendy’s food chain. Ronald seems enervated and spent, his long dangling schlong having done its duty. Wendy seems to be in an ecstatic trance like the famous Maenad (follower of Dionysus) by the ancient Greek sculptor Skopas. Our heroes are not warriors, poets or scholars – they are fast food icons. 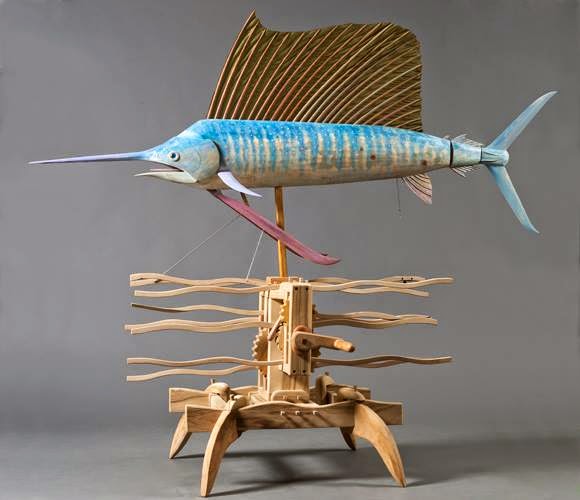 Yutaka Kamiyama has made amazing wooden sculptures of various types of ocean fish for this show.  What is absolutely mind-boggling is that he has cranks and levers and you can turn one of these levers to make the fish move in an uncannily close approximation to its natural movement in the sea.  How did he do this!!!!? I stood there for 30 minutes cranking all of his fish in total wonderment.  Anthony Burgess used the term “A Clockwork Orange” to represent the capacity to turn the natural into something mechanical and we see that process here. The cranks and levers and cogs and wheels represent the immense effort needed to even approximate a natural process. We see an intense appreciation and longing for the natural as well as a Herculean but futile attempt to capture and control these processes ourselves. 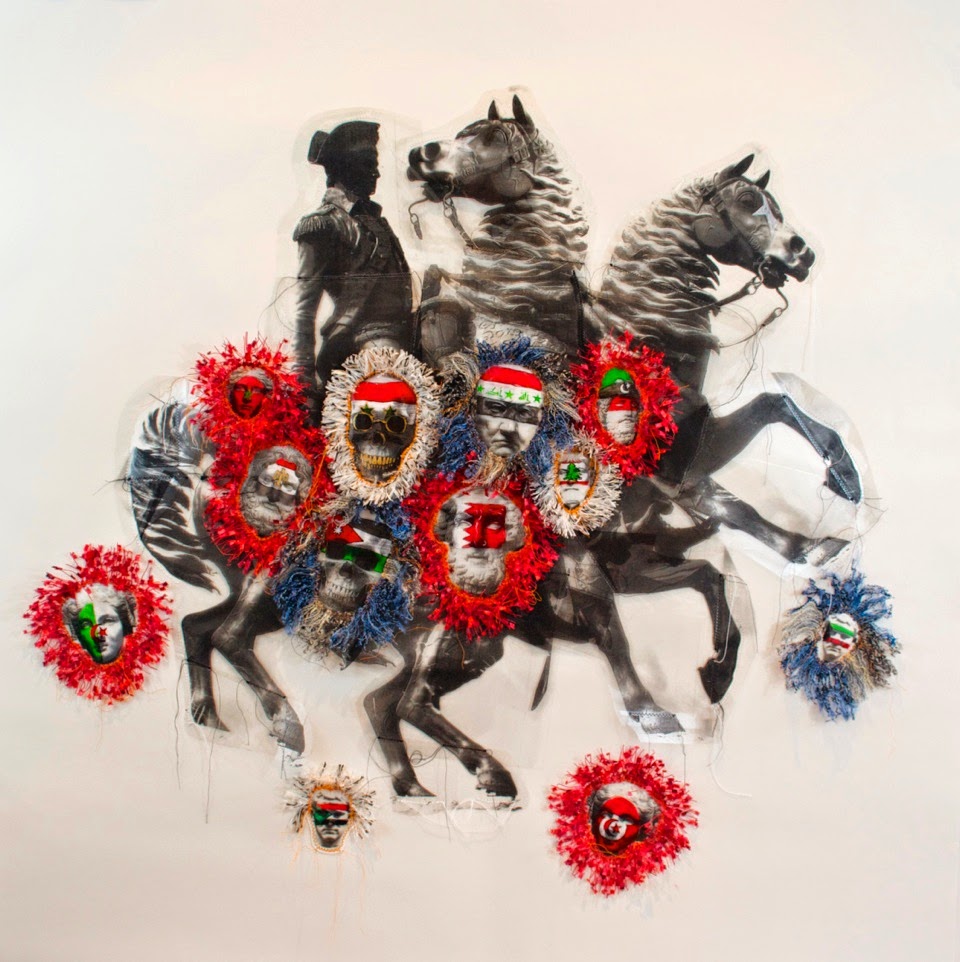 Manju Shandler seems to be parodying the concept of nationalistic pride and especially a nationalistic pride based on the concept of a democratic form of government that might be used to justify anything.  You see various ancient Greek busts covered with national flags and even icons of democracy, like George Washington, covered with diverse national flags.  This ancient concept of Greek democracy is often used to justify the corrupt operations of various governments, including, perhaps, our own. 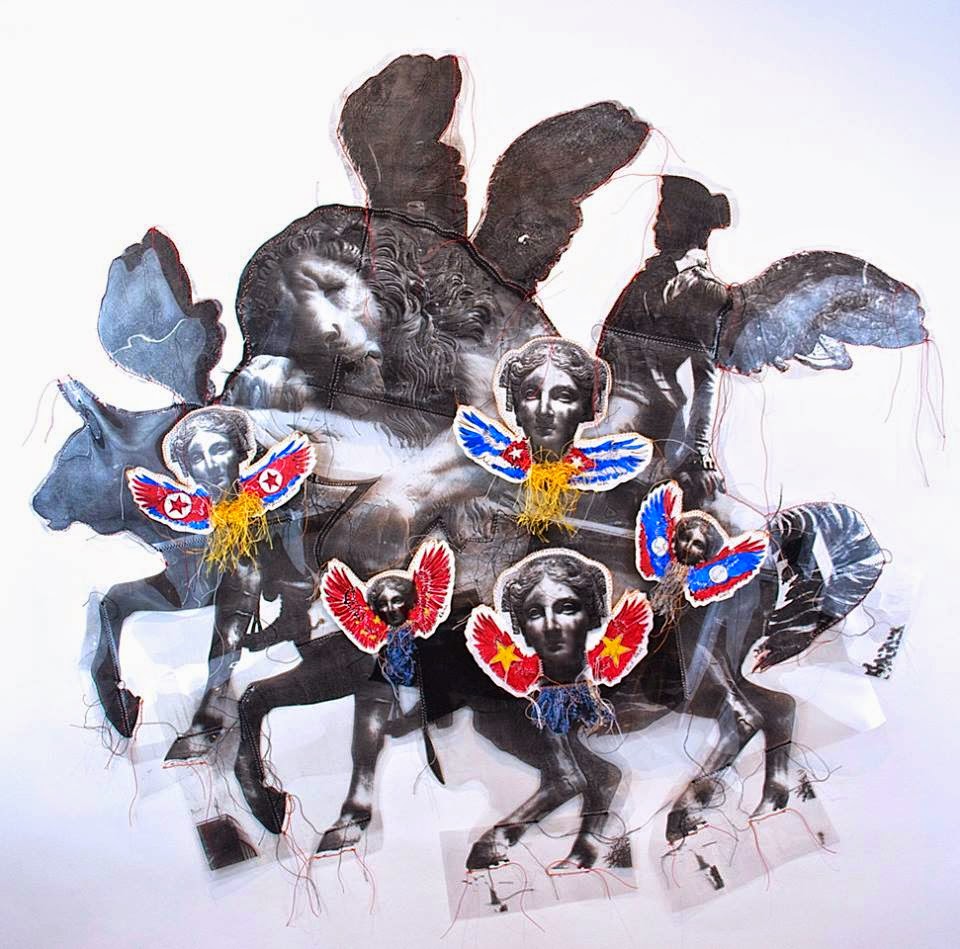 Truth be told, if you look at history outside of the context of your World Civ 101 class, the “tyranny” of Cyrus the Great and his Persian offspring seems to have been a golden age for most of the world, while Athenian ‘democracy’ was in fact demagoguery which lead to horrors, such as the execution of Socrates and greedy and brutal imperialistic conquest (until the Spartans put an end to all that). 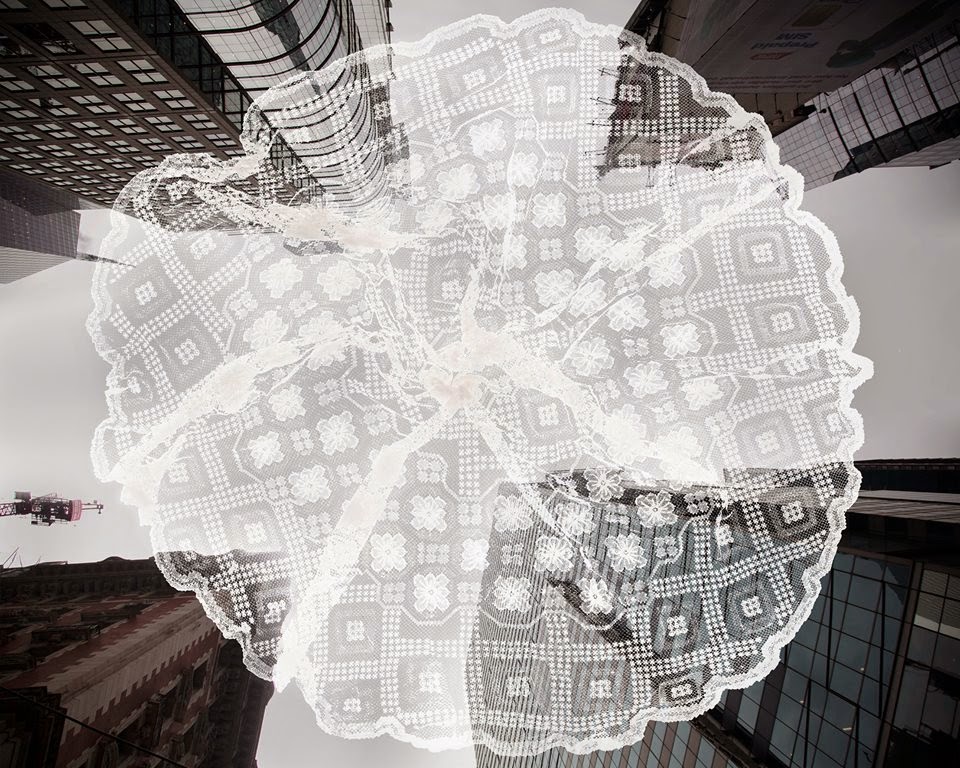 Isa Ho takes photos in which she holds the camera facing upwards so that we often see buildings soaring toward the sky. Yet she also includes some type of visual element as if it is on a horizontal plane through which we are looking at the sky – she might have a fish or cupcakes or other stuff.  The buildings frame the sky in a manner which implies the need or desire for ascendancy while the (often) goofy item or items on the horizontal plane might imply what’s keeping us from that ascendancy.  The cupcakes could be a type of sugary self-satisfaction while the fish is clearly not in any visible water – as if we, like the fish, are submerged and not even aware of the ocean around us. Yet, even though the camera is pointed up in the air, the photo is presented so that we are looking directly at the sky in front of us – the buildings seem to stretch forward and this has a type of tunnel effect. 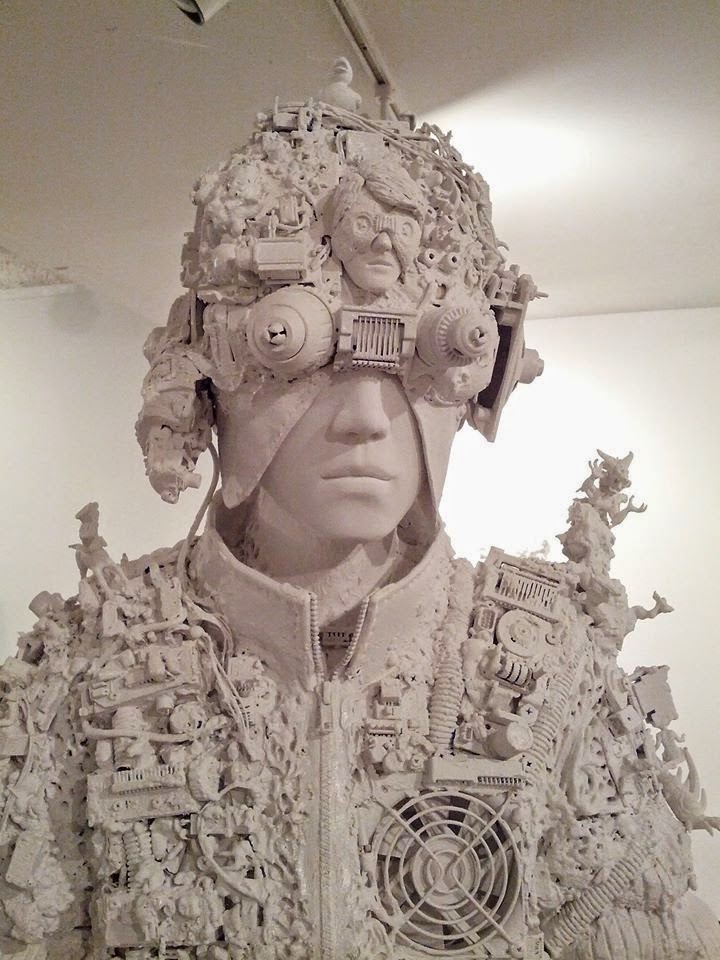 Shu Ohno uses the accretions of various small objects to create hyper-complex ornamental pieces. The original object is like a center of gravitational pull or one could take a different perspective and draw the conclusion that all the extra stuff has grown from the original item, often rendering it useless – but not in the case of a musical instrument on display or the new type of body armor worn by a male figure.  To me these objects are absurd in the way Meret Oppenheim’s fuzzy bowl is absurd.  Each object seems to be growing a fungus or leprosy of minutiae.  A handgun, for instance, is covered by, among other things, little figures that could be at war.  So each object could be covered by items comprising a narrative of the object so we get what we might call a type of narrative leprosy – the object has lost its meaning and purpose through some entirely theoretical process which has caused these leprous growths. 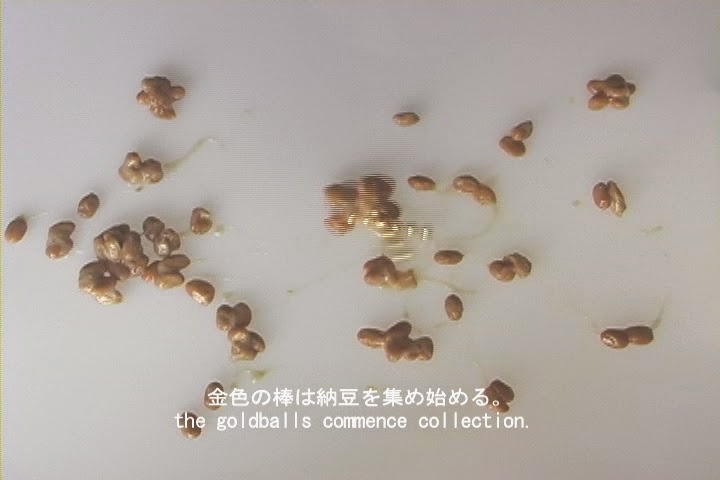 Finally there’s a very funny and thought-provoking series of videos by Tomoo Nitta in which a string of little golden balls interacts with natto – a bean-like Japanese breakfast food. The golden balls possess a frenetic inherent energy which makes them do all kinds of things to the natto. The natto is, for instance, categorized in various ways by the balls: there is the natto which is “here” and the natto which is “there”. However, despite the wishes of the golden balls, the “here” natto is conquered by the “there” natto and the “here” becomes the “there”.  Nitta even attempts to explain the origin of consciousness through the interaction of the golden balls and these beans.  All in all it’s a pretty funny piece in an amazing show.

I did not learn of this show until recently and you may only have a day or two to go, but if you get a chance to go, you should.  Crank the wooden fish and witness the birth of consciousness among a Japanese breakfast food.
Posted by Daniel Gauss at 3:38 PM