David Rathman at Morgan Lehman Gallery (The Twilight of Testosterone in the USA?) 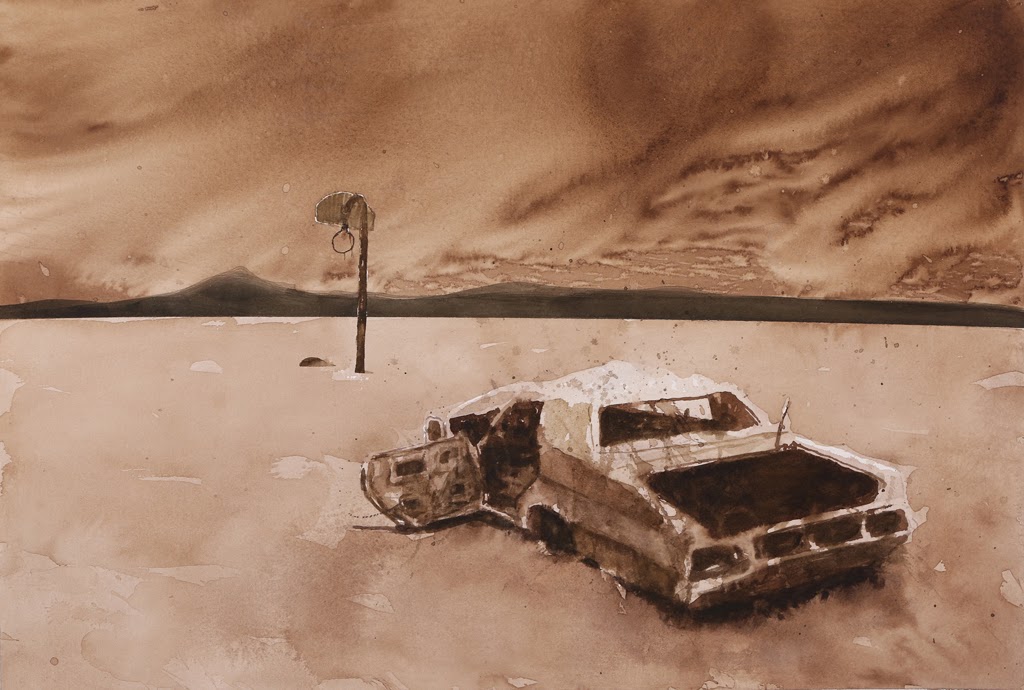 The big questions for me, looking at the recent show at Morgan Lehman Gallery, were: Is David Rathman making a social statement about the loss of working-class America and the effect this has had on America’s conception of masculinity, or is he making a more general statement about changing conceptions about ‘manhood’ in America (as we lose our working class)? Or, am I misreading symbols and is there some deeper allegory afoot? 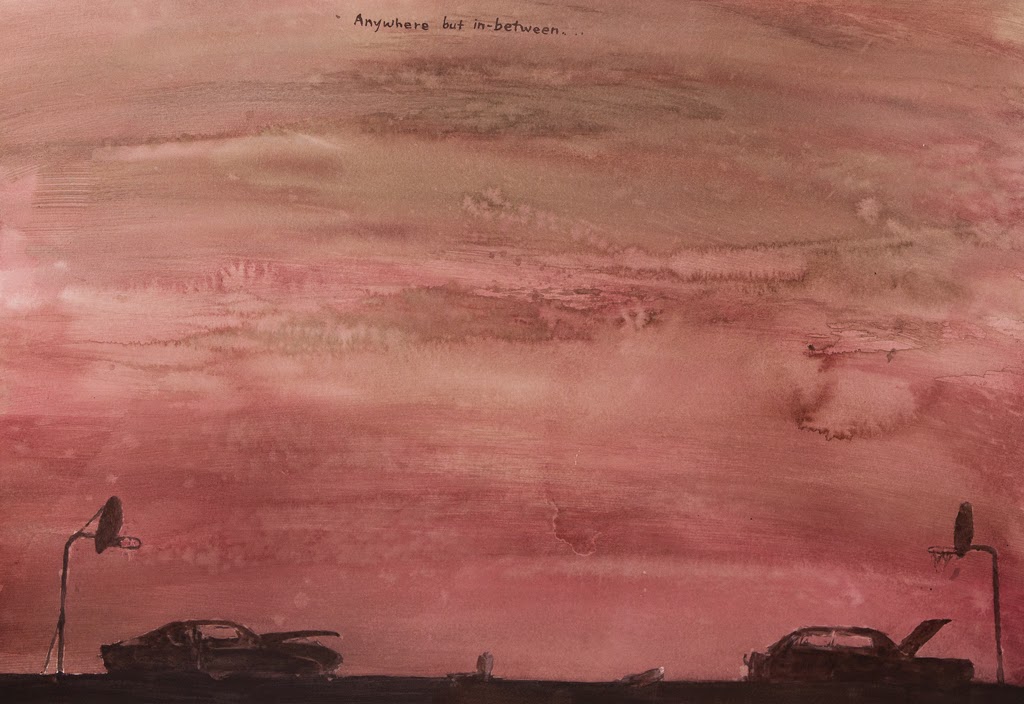 A couple of these questions stem from my own experience in regard to the types of outdoor basketball hoops he presents in many of his paintings. I grew up in one of the few racially integrated neighborhoods in Chicago (back in the day), Chicago still being one of the most racially segregated cities in America. It was a neighborhood founded originally by German immigrants who had built Holstein Park - a large park that ultimately would contain two giant baseball diamonds and an area containing several basketball hoops on a large cement court.  We working-class kids of various races and ethnicities used the park religiously and this helped me look beyond race and later allowed me to move more comfortably through different jobs and neighborhoods interacting with different types of folks freely and respectfully. 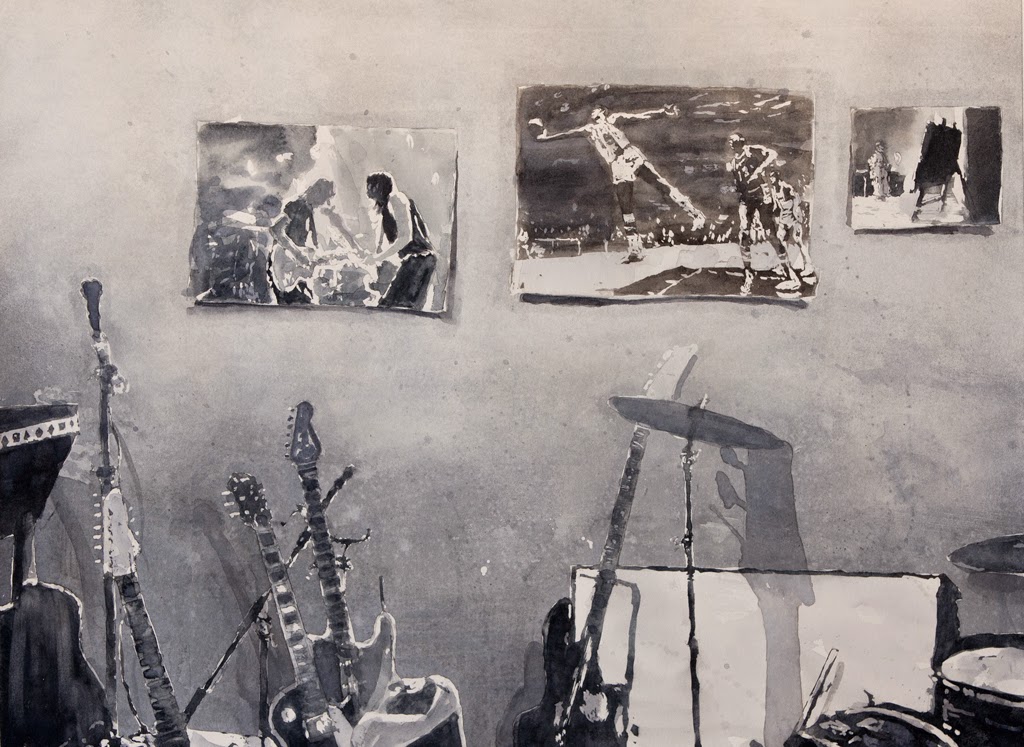 So imagine my shock coming back home a few years ago and seeing that the park looked the same, except that the basketball hoops had all been taken down.  There was just a cement court with nothing on it now. It seemed that now that the neighborhood had become gentrified, the young, affluent white folks had decided that the racial mixture of kids still lurking in the environs, who wanted to use the hoops, would be an eye-sore and potential threat to their well-being.  Word on the street (what street was left) was that the hoops were literally taken down to stop black kids from coming in to play basketball. The park seems now to be primarily used by Golden Retrievers and other yuppy dogs as a huge dog run, and I’ve seen some pathetically bad ‘soccer’ games there of all white kids with first names like Asher, Barnaby, Dashiell, Hayden etc. 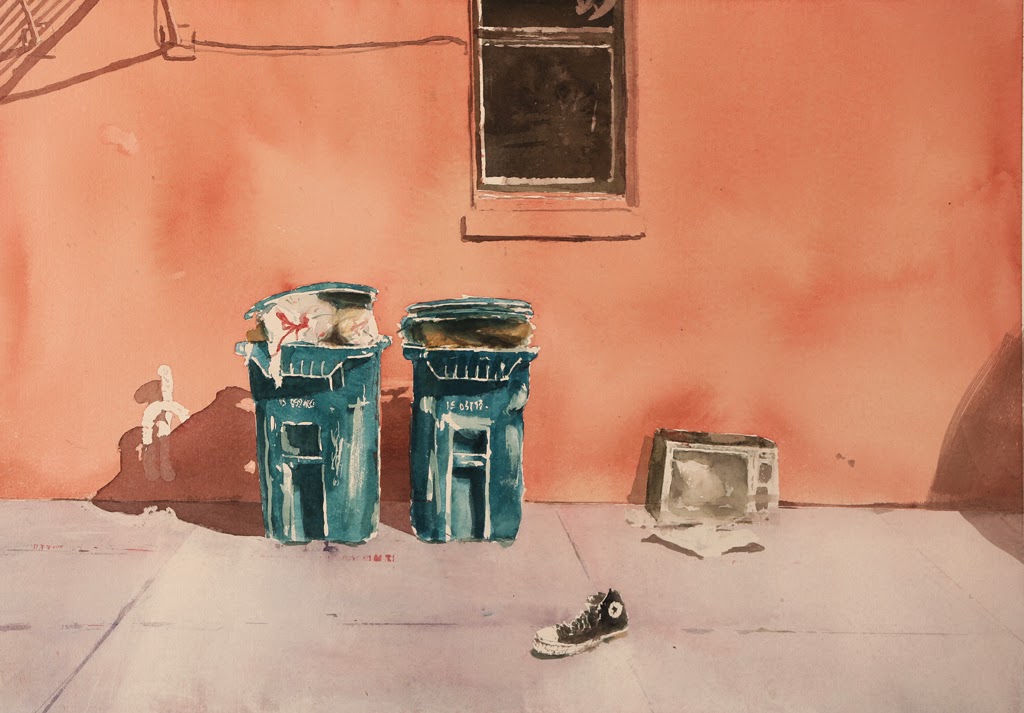 So hoops mean something. Indeed, here’s an experiment you can try. Take a basketball and go to an outdoor court somewhere at 6am (when it’s totally empty) and somehow the sound of the dribbled ball will reach the finely tuned eardrums of every guy within a radius of 2 miles, will activate and boost testosterone levels, and you will have a multi-cultural pick-up game of 20 guys going within 30 minutes.   Hoops are huge to the American male psyche and, frankly, an absence of hoops in a neighborhood represents both a type of ‘ethnic cleansing’ and a type of emasculation for that neighborhood.  It was the use of old, beaten up, messed up, twisted and corroded hoops that resonated with me in this show and drew me into it more deeply as if I were looking for one last pick-up game myself. Yet, along with the rusted out hoops we also see beaten up old cars that have been abandoned and which have also become corroded. Looking closely, these are cars, I’m guessing, from the 70s and 80s, when America still had a working class and cities were predominantly blue-collar places with hoops all over the place. 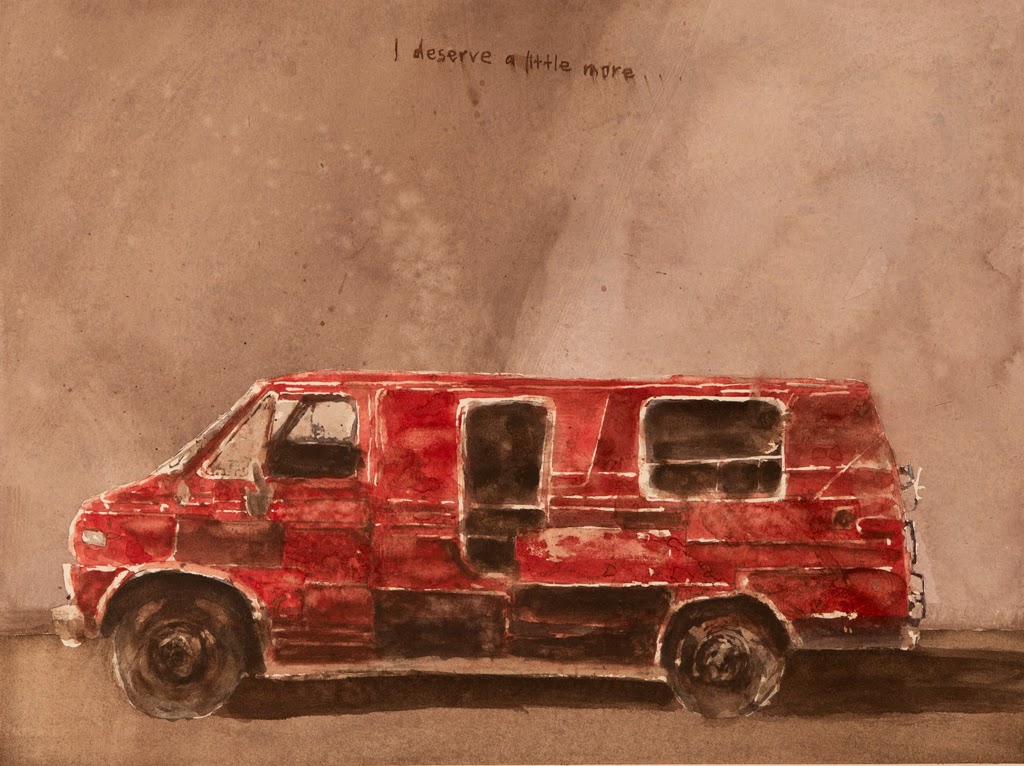 So part of me thinks this show of amazing watercolor paintings is homage to the last generation of blue-collar, working class American guys and the type of ethic and strength they brought to our society. These cars were used until they literally started falling apart – they were taken as far as they could go before being abandoned (and replaced by what?).   In these paintings the terminus of the life of these cars corresponds to the terminus of the outdoor basketball court.

Yet there are other objects that factor into some of these paintings.  There’s the big old 1970s/80s Chevy (?) van. Above it is scribbled “I deserve a little more…” The owner of the van deserves a little more in life? The van deserves a little more time to operate? We all deserve a little more than material stuff?  The driver deserves better mileage? Hmmmm. There are also the tributes to heavy metal rock music performances and in one watercolor we see rock guitars under posters showing a metal band, a basketball rebound and an artist standing before an easel. One of my favorite paintings is of a lone Converse All Star lying on the sidewalk outside of a couple garbage cans. So part of me thinks this might be a personal statement of how the passage to ‘manhood’ in America has changed. I mean, let’s be honest, the Converse All Stars that were worn by inner city kids back in the day are not the Converse All Stars that some folks are wearing today.  What All Stars represented in the 70s and 80s is not what they represent today.  It could be that the artist is pointing out that the male experience in the USA, and the development of the male, used to be dominated by working class values which are being replaced by, dare I say, more effete values?

The paintings could also be a type of allegory employing the morbidity of testosterone driven activities. Masculinity has often been used in symbolic or allegorical literature to represent a type of aggressive and wandering spirit that seeks fulfilment in the ‘eternal feminine.’ Yet, we see no or few traces of femininity in these paintings. So perhaps the paintings are just a magnified view of a type of male development which has been or is being rendered obsolete – for better or for worse.