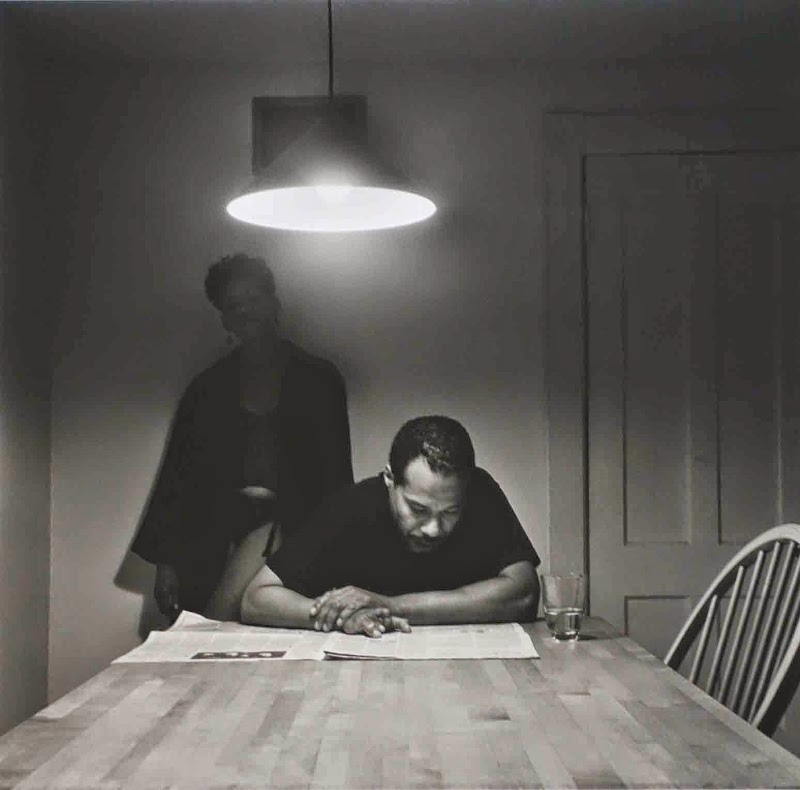 To me the current group show at Bill Hodges Gallery asks such questions as: Historically, how have African American artists had to navigate through an art world dominated by white artists, gallery owners and critics? How have things changed since the time of Norman Lewis and Jacob Lawrence? To what extent do black artists owe the black community something in their work and to what extent should they ignore race? Can a black artist truly ignore race in his/her work? Has art reflecting the black experience been finally ‘integrated’ into the dominant culture ‘white’ gallery scene or are ‘black’ artists still marginalized and considered ‘black artists’ instead of just plain ‘artists’? How might we change things so that all meaningful experience is validated? 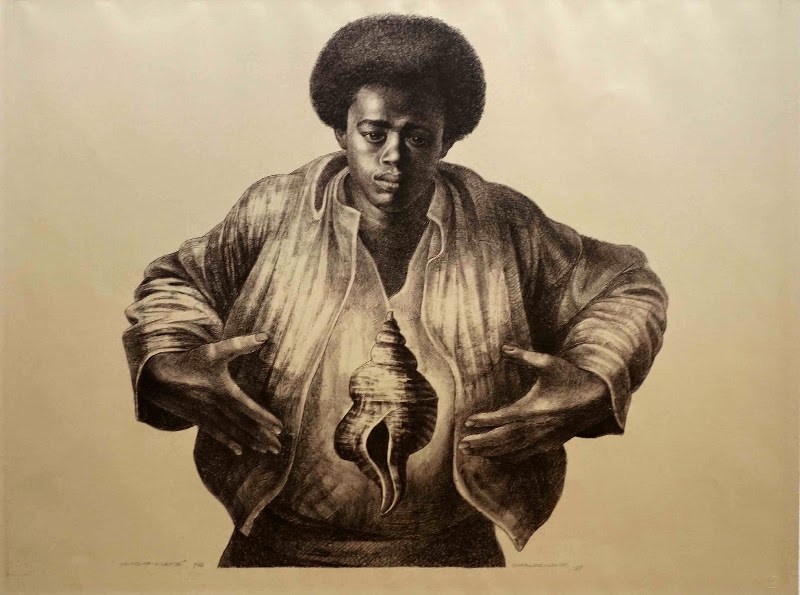 Due to racial segregation and discrimination in the USA, African American visual artists often learned of the latest trends and movements in the contemporary art world, but could not necessarily expect to become active contributors. At the Bill Hodges Gallery, one of the artists in the “History” show is Norman Lewis, often called ‘the first African American abstract expressionist’. Indeed, he seems to have known and worked with Pollock and Rothko and although he got gallery shows and some attention, he certainly did not get the attention or acclaim he deserved for his contributions to Abstract Expressionism. 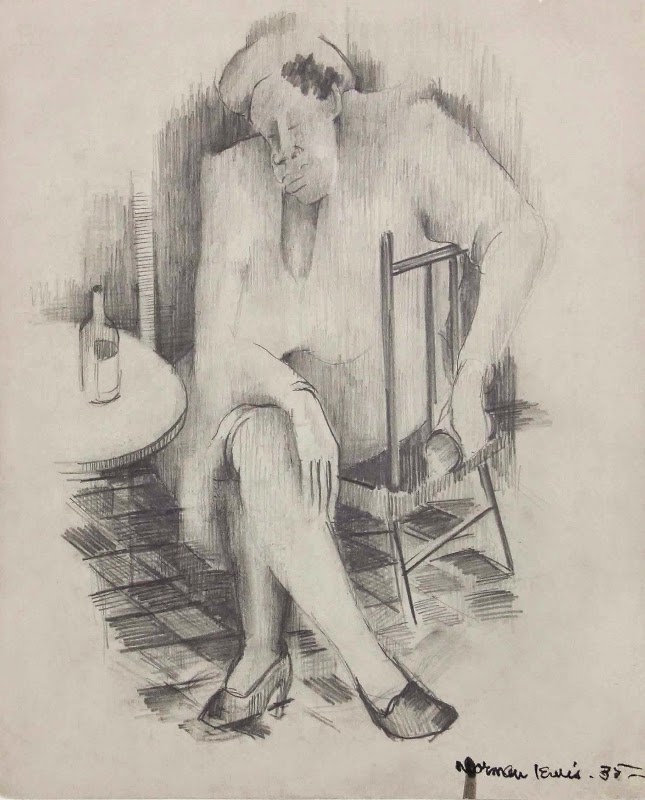 This was definitely due to the racism among art buyers and art critics of the time and also due to the fact that Lewis, even when engaging in Abstract Expressionism, never seemed to wholly abandon some representational features, which made his work seem less personal and more politically oriented toward statements about the black experience in America. So if you were black and drew upon your experience within an oppressive dominant culture, to make an existential statement to enrich the lives of others of any race, your experience was not valued and you were marginalized as an “African American” artist, the same way women were marginalized. Unfortunately, Lewis is still sometimes known for the novelty of being the black guy who was doing what the famous white guys were doing, although, in my humble estimation, his work seems deeper, more meaningful and more experimental than the work of most Abstract Expressionists.

In the show we see a priceless earlier work by Lewis, when he seemed to still be in his Social Realism stage, just before painting his most famous representational work: The Yellow Hat.  There is an aging, bulky African American lady, dressed up for an occasion and clutching something with her right hand (flowers?). She is at a table with a bottle beside her. The delicacy of her right hand, draped over her knee, is in contrast to the left hand clenched around the stems. The tilt of her head and closed eyes indicate some type of (romantic?) reverie. It could be that Lewis was poking fun at someone in his community, a bit past her prime, dreaming of love, but the artist also allows us to witness a person experiencing an inner event and in trying to understand her inner state we can see the possibilities and limitations for shared experiences –  what do we do, exactly, when we want to understand how another is feeling? Why are we drawn to do this? To what extent can we replicate another’s experience in ourselves just by observing it? Paradoxically the drawing puts us into a position of trying to understand a real inner experience in a fictitious person, which is often the central endeavor we engage in looking at art and reading literature. 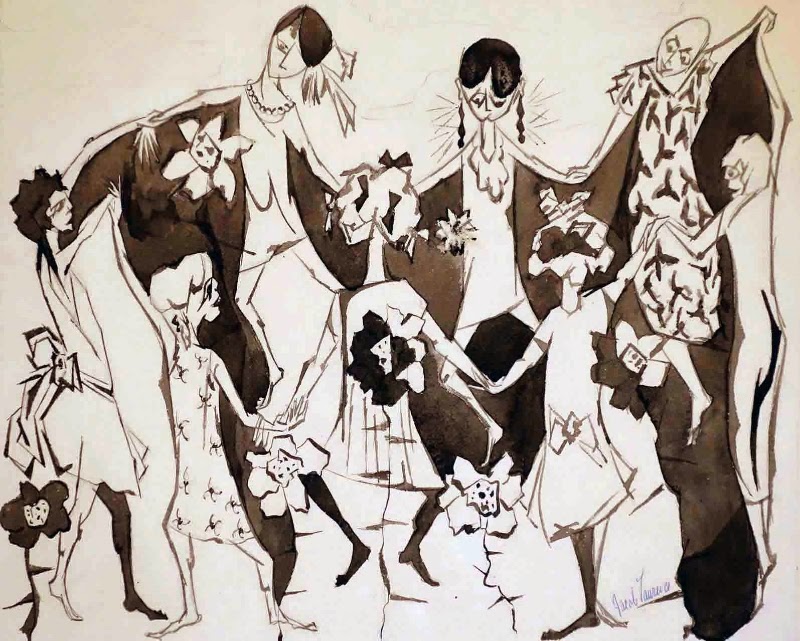 Jacob Lawrence (the first African American artist to have work displayed at MoMA) once said, “If I have achieved a degree of success as a creative artist, it is mainly due to the black experience which is our heritage – an experience which gives inspiration, motivation, and stimulation.” Lawrence, as evidenced by the quote above, embraced his identity and used it to break into the mainstream of the art world. He enjoyed painting various series of paintings and is most famous for the 60 piece series titled The Migration of the Negro, which represented the movement of black folks from the South to the North after the end of slavery. African American history was of the utmost importance to Lawrence. In his piece Children at Play we see the sense of community and celebration he found in his racially segregated community, in lieu of despair or apathy. 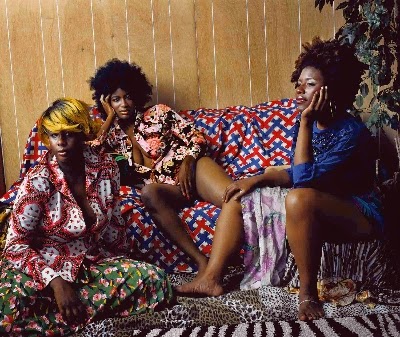 A number of amazing artists are represented in this show, but one of the highlights for me, and the eye-catcher that brought me into the gallery one Saturday afternoon, was a photo by Mickalene Thomas called Les Trois Femmes Noires. Thomas is an amazing artist who examines issues of black feminine beauty within an over-arching culture where the ideals of beauty may not reinforce a sense of acceptance or joy for black women and she is known for her paintings covered with rhinestones, acrylic and enamel. So how would you characterize the postures and facial expressions of the women to the left of the photo? Thomas is interested in the history of art from a feminist perspective and in previous pieces (like one recently shown at MoMA) focuses on the exploitation of women by male artists as sexual objects of desire. So perhaps this is why the viewer’s gaze is met with a sense of contempt and even confrontation. Their comfort with their bodies and sexuality and their direct gaze at the viewers of the photo create a strong, arresting presence. They seem to enjoy their bodies and their sexuality but they also seem to resent the intrusion.