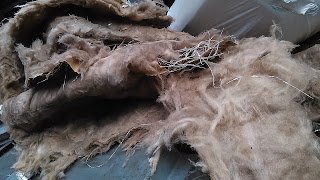 In Walden Thoreau recognized the central importance of “heat” as one of the necessities of human life: “…for while food may be regarded as the fuel which keeps up the fire within us…shelter and clothing also serve only to retain the heat thus generated and absorbed. The grand necessity, then, for our bodies, is to keep warm, to keep the vital heat in us.” 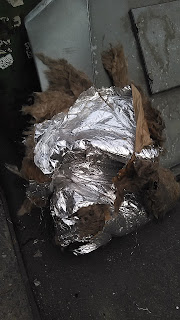 I saw some amazing discarded insulation material on 25th street while at the openings tonight (6/25), and it was the best ‘ready-made’ art of the evening. I took 4 quick snapshots with my smart phone.

So what is the symbolism or significance of discarded insulation material?  Well, first of all, just look at this beautiful stuff! It looks like a mixture of thick, wild animal fur and synthetic NASA-like material to cover a planetary rover from excessive solar radiation. It potentially embodies the attempt involved in recognizing a natural survival mechanism or function that evolved over zillions of years and deliberately reinventing it better than ever. This capacity to recognize what was usefully but blindly created by nature, in order to harness it more effectively toward our own (greedy and self-serving) ends is one aspect that separates us from animals, and forces us to live greatly alienated from nature. 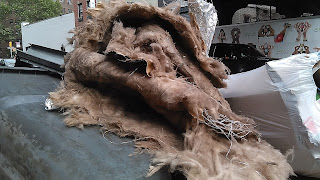 Or, you can look at the faux animal fur (I wonder what kind of synthetic material that is?) and the silver coating and threads as being in conflict with each other. When a mosquito sticks its needle into our skin, it injects a substance to stop our blood from clotting (so it can drink our blood more easily – damn the freaking pest!). But that anti-coagulant is immediately attacked by histamine within the body – producing puss and an itchy little lump.  So this insulation material looks like a beautiful type of symbolic puss to me – animal fur and silver space stuff duking it out. 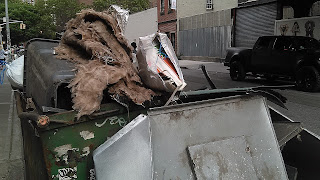 Also, there’s symbolism in the fact that the insulation material is being discarded. Although Thoreau points out the necessity of heat, we can think of this type of material as a First World luxury. It’s as if someone is saying, like Thoreau, “OK, I don’t need all this extra crap in my life. I’m going to try to get closer and closer to the natural world, where no silver space stuff has to be mixed in with fake animal fur to keep people warm.” Or did you ever see the old film “My Dinner with Andre”? Andre deliberately refuses to use a blanket because he wants to feel the cold – this brings him closer, he feels, to those who might not have the resources to warm themselves adequately, and adds another dimension to his life through his refusal to take means to add extra comfort to his being.

This stuff could also be part of the allegory which is Chelsea. I don’t know which gallery or building was being gutted so that this insulation material was discarded. But perhaps we can think of this stuff as what the heart and soul of Chelsea, or, yes, the guts and viscera of Chelsea, used to look like before the Highline Park came along to help raise rent prices and property tax prices, thus pushing many of the galleries out.
Posted by Daniel Gauss at 8:27 PM