Pardon the Interruption, Please : Will Kurtz at Kim Foster Gallery 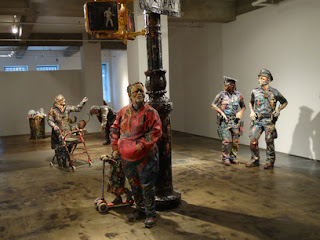 The first Thursday after Labor Day, in the USA, is the traditional beginning of the art gallery season in the Chelsea district of Manhattan. One of the highlights of the Chelsea opening night on September 10th was the sculptures of Will Kurtz at the Kim Foster Gallery, which engaged and dazzled the hordes of folks who came out for the night of art-viewing, people-watching and free wine. 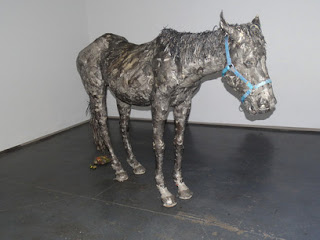 Kurtz makes life-sized figures of humans and animals out of New York City newspapers (often the New York Times) using an internal wood and wire structure. He usually chooses to depict the types of folks we see around us in public spaces as we are moving about the city and in the past he has often focused on marginalized people with their pet dogs. In his online artist statement he states that he wants to reveal both the ‘resilience and vulnerability’ of these folks to create a feeling of empathy in the viewer. He likes using a person’s dog in many of his works because of the ‘innocence’ the animals bring to the situation. The innocence and raw energy of the dogs is often in stark contrast to the beaten-up, obese, enervated, abject person nearby. Indeed, the dogs might even represent symbolic proxy figures for the people depicted, representing a pure, guileless core of the person which we should be able to better recognize in order to make this person more worthy of our concern and feelings of fellowship. 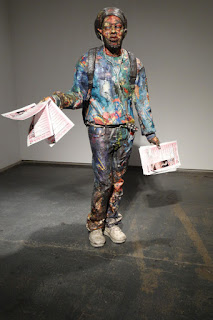 On each figure we see little glimpses from the newspapers of stories, headlines or images. On the big butt of one woman we see the phrase, for instance, “…half the sky…”. Like the ever-present news, photos from the news, ads, headlines, we cannot escape the effects of these folks who seem to be permanent markers of our journeys through the city each day. Indeed, like the buildings and streets they occupy they seem to also be permanent fixtures that we have seen a zillion times, can anticipate constantly seeing and therefore tend to ignore or disregard. It’s as if we are subjected to an endless and unbreakable cycle of the same emotional responses from the news and these people through each day. 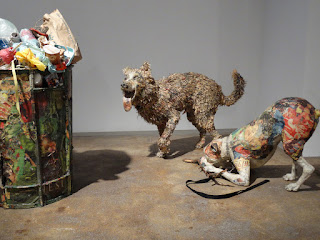 As we experience them, they are mixed into the advertisements and the news we almost unconsciously absorb just as readily as the news and ads are mixed into them in these sculptures and this reflects our relationship to these people. If one of them does catch our attention again long enough, it’s the same compassion, disgust, admiration, the same limited range of emotions engaged in us by the papers. Like lurid headlines, they can engender interest, sympathy and disgust all at once.  These folks are as ubiquitous as the news and run us through the same untiring pace of responses as the news. It’s as if Kurtz wants us to realize that there is so much more to be felt and understood in regard to these people than we have felt before or tend to feel. Likewise, there is so much that we are missing by merely reading the news and not taking steps to more deeply engage our personal worlds on deep and meaningful levels. 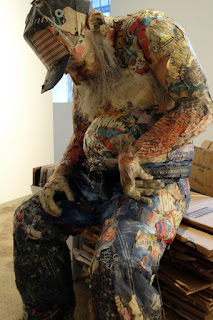 Newspapers are, of course, partially in the business of soliciting empathy from us and often we read about suffering around the world that we are helpless to address on an individual basis. Therefore, newspapers might be the perfect medium for the depiction of these folks. Newspapers help to convey an aging process to these pieces as well. The dates of the stories, ads and headlines do not change just as our birthdays do not change; the newspaper grows older in a discernible way just as we and these folks do. The folks in these sculptures represent a type of urban permanence and transience at the same time. 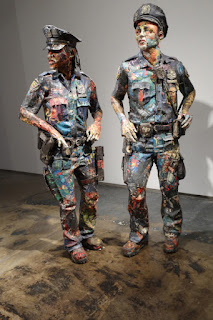 Interestingly, Kurtz also includes a couple New York City police officers among the folks we commonly see on the streets and this is of real, timely significance in New York City. There is constant chatter in the press as to how the homeless in New York are proliferating and destroying the ‘quality of life’ that more conservative mayors had allegedly created in the past. The police are now being used, according to what we can see in the papers, to break up little communities of homeless people so that they do not create such an eyesore to ‘the rest of us’. So we have police in this gallery, watching over the street folks. 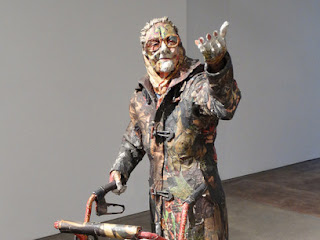 Furthermore, the police, in New York City and the USA in general, have come under deep scrutiny. In New York City, about a year ago, a black man was needlessly and cruelly killed by police officers making an arrest – sparking massive protests.  Just a few days ago an African American, Harvard educated, ex-tennis star was attacked by a police officer for absolutely no good reason. People around the world are currently watching the video and wondering why this kind of thing keeps happening here.  So the presence of these officers in the show is just brilliant given the changing perceptions of the police in the USA and especially New York City. The NY police chief, himself, has said that he has not witnessed such an anti-police attitude since the early 1970s. So the police are standing vigil in this gallery – are they our protectors? Are they benign? Are they evil? Each viewer has to deal with his/her own feelings about seeing these cops in a gallery in light of all the recent news. Each person also has to ask him/herself what can be done about the apparent abuses that seem to happen regularly in this city in regard to the police. New York City has more police officers than Los Angeles, Chicago and Houston combined – they are everywhere in this city, including, now, an art gallery.

To many of us the people depicted in this show are of as much value as old, discarded newspaper. Kurtz helps to show that there is something separating all of us from each other on very basic levels in our society – it’s up to each of us to ask why and how and to try to break down any barriers on a personal basis. The show runs until October 10th 2015 at Kim Foster Gallery at 529 W. 20th Street in New York City’s Chelsea district.