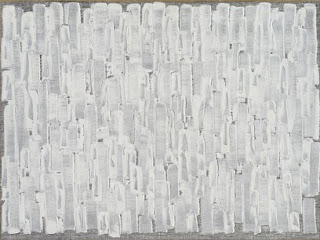 Burlap, for Ha Chong-Hyun, seemed to represent both a force of resistance and a platform from which to express. When his “Conjunction” series was begun in the 1970s, burlap was a common material from US military bases and aid organizations, readily found in South Korea during that country’s darkest days of early economic development and dictatorship, and it became Ha’s choice for his paintings over traditional canvas. Indeed, Ha exploited the dual nature of burlap - a strong material that allowed a transfer of air – when he forced his paint through the ‘back’ of the woven material before using his own hands or worker’s tools to create the image presented to the viewer on the ‘front’ of the material. There are areas in many of his paintings where you still can see evidence of the paint having been forced through the burlap before being worked into mostly linear abstract patterns. 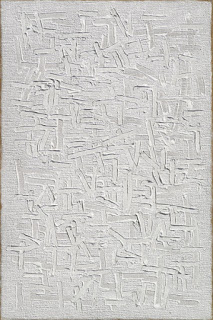 Tina Kim Gallery in Chelsea, New York, recently presented an overview of this artist’s work in the wake of the success Ha and his fellow Dansaekhwa (School of White or Monochrome) artists have had with collectors. Interest in Ha and those of this Korean movement (stretching forward from the 70s) seems to have finally captured the attention of collectors and museums, after long years of relative neglect, due to a book by an art historian named Joan Kee and shows at ‘influential’ galleries in Seoul and LA. This seems further evidence of a burgeoning trend and niche which may be opening in the dominant art market for meaningful and overlooked art from previously ‘marginalized’ countries – i.e. the show at the Tate Modern of Saloua Raouda Choucair, a Lebanese artist who worked for decades in obscurity, comes to mind. 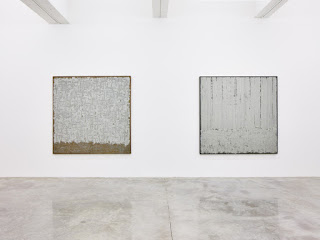 In reviews of Ha’s work, he is sometimes equated to abstract expressionists, but if there are similarities, they are probably coincidental since Ha and the others in his group eschewed any western influence. The colors Ha used are muted earth tones worked primarily, it seems, in angles or straight lines. In a country under martial law, living under a sequence of dictators, the expression of a grim, regulated, limited expression became, possibly, the most potent form of political protest. To me, Ha’s work bridges the divide between an artist’s concern for the state of his society and his own humane development within a state that denied civil rights and liberties and which was riddled with corruption. In an oppressive society, for an artist to just look inward might amount to complicity. Ha’s methodology and images potently convey the struggle to strive for greater humanity within yourself and your society simultaneously, but under great duress. 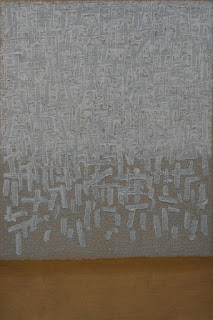 The closest western analogy to what Ha was doing might actually be the Arte Povera movement (although, again, this seems coincidental).  Arte Povera artists in Italy sought to eliminate the division between art and life and did so by using common materials and tools.  The materials and tools they used were a form of protest against industrialism in that their materials were more common before the development of industry in Europe.  Arte Povera was a rejection of the current economic system due to the waste, environmental harm and corruption stemming from it (interestingly, while the US celebrated Pop, Italy celebrated Arte Povera). 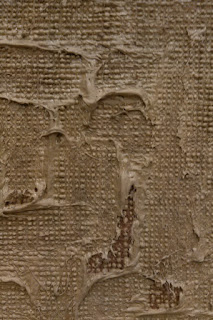 {{{Here's a close-up of how the paint is pushed through the burlap weave. The burlap, itself, could represent government censorship through which an artist has to force his art, or any obstacle requiring a use of force to overcome it.}}}

So Ha uses burlap, representative of both oppression and aid. Burlap is also a commercial commodity, as visual art is, so Ha forgoes the pretense of a canvas and uses something common to commerce. The dual nature of burlap can, moreover, evoke many contradictions. In the 70s Korea, for instance, was ruled by a dictator who is still highly esteemed among many of the older generation, and whose daughter is now the president of Korea.  Park Chung-Hee is considered both a dictator and an economic savior. The US military and US government, as a further contradiction, provided both an oppressive military presence and a reassuring presence of staving off invasion from the North. 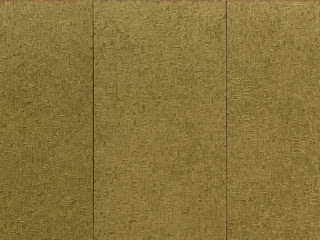 Ha does not seem to be saying these contradictions were necessary – Kim Dae-Jung did a fine job with the Korean economy and he was no dictator – he seems to frankly acknowledge, however, the existence of these contradictions through his work. That he continues using his method to this day may imply that even in what seems to be improved conditions in his homeland, sinister contradictions may still prevail on subtle or barely perceptible levels. The recent Sewol disaster, and the massive disenchantment among many Koreans generated by the government response, comes to mind. And if Ha’s method resonates with those of us outside of Korea, it could well be due to our own concerns about sinister contradictions in our own society. 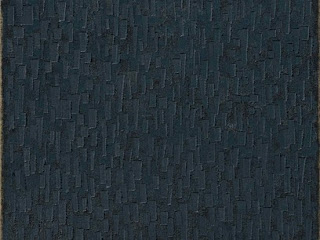 The process Ha uses seems to be one of creative force (to overcome the resistance of the burlap) and workmanship (to create an image that will arrest and engage the attention of the viewer). From the facticity of his experience in his own homeland, his process and images can stimulate the imagination of a contemporary viewer anywhere to comprehend and validate the struggle he and his countrymen endured and to elicit compassion, humanity and self-recognition as a response.

The show closed on December 12, 2015. Please refer to the gallery’s web site for further information: tinakimgallery.com
Posted by Daniel Gauss at 8:31 AM