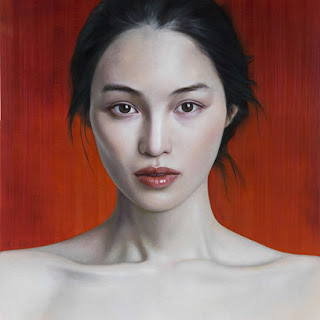 As one enters Klein Sun Gallery, one of the first images in the new show of works by Ling Jian is of a strikingly beautiful young Chinese woman dressed, apparently, in some type of government outfit. Contrasting the effect of perfect makeup with a starched, white, official shirt collar, Ling seems to be addressing the erosion of Communist Party values dealing with the equality of women and highlighting the increasing encroachment of ‘the beauty myth’ into Chinese culture as a result of the post-Maoist open-door policy.

By extension, perhaps, he would also seem to be implying that the objectification of women is just one of those unfortunate concomitant factors that goes along with welcoming western progress – like the Chinese workers jumping from the roof of an Apple factory because they can’t bear the poor wages and slave-labor hours.  The irony is that by embracing the ‘western’ concept of beauty, the woman in the uniform puts one more nail in the coffin of one of the best ideals of the Chinese Revolution – the dignity and full human potential of women. 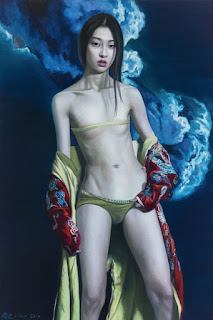 So a big part of what I liked about the show – and this may not be exactly what the artist’s actual statement is – highlights the fact that western-inspired globalization is not a pure, Hegelian process of inevitable, spiritual and moral improvement. It seems to have brought whitening creams to South-East Asia as well as plastic surgery and mind-numbingly exploitative K-pop to Korea. 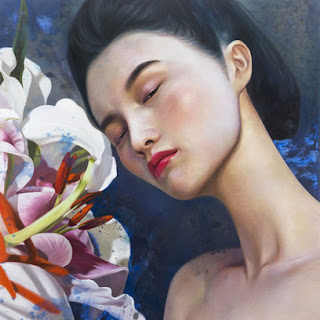 So the one thing Mao got right becomes the first thing to die, now that Deng opened the door. Or Ling could be saying that the Revolution never really changed underlying conditions that had developed in China – for a brief time sexism was held down through a massive state apparatus. Now it’s blossoming from out of starched, white collars. About 25% of contemporary Chinese women experience domestic abuse, including marital rape. There’s a Chinese saying going back generations: “If you don’t beat your wife every three days, she’ll begin destroying your home.” 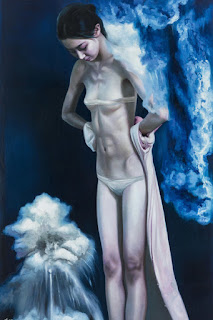 So, to me, being confronted by these huge, beautifully executed canvasses morally challenges the viewer to examine his/her role in this whole process. On lingjian.org the artist is quoted as saying, “I attempt to multiply the power of temptation by displaying it on my canvases.”  Men who view these paintings are not challenged, as male painters used to challenge men in the past, to indulge in fantasies and derive prurient visual gratification. This is a male painter throwing a corporate-inspired sexual exploitation in our faces and asking us how stupid we could be to buy into this garbage. To women, he seems to be asking how stupid they could be to cave in to the pressures of demeaning and objectifying themselves. Sure it looks glamorous, but think! 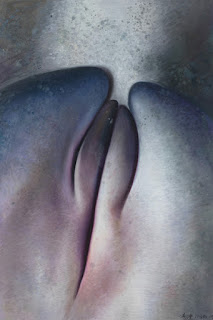 To bring this point home as forcefully as possible, I am assuming, he also includes realistic paintings of sharks copulating in the show. There is a wry, pessimistic humor in this as well.  The show is called “Nature Chain” and I would guess it is because the folks who profit from causing women psychological torture through bizarre conceptions of female ‘beauty’ tend to argue that these forms of exploitation and abuse are ‘empowering’ to a woman and natural. So you turn a corner in the show and go from ultra-thin, sexually charged Chinese ladies to sharks fucking each other. 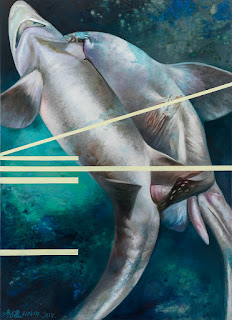 In the past, western artists could get away with portraying women as objects of sexual desire because the female figure was often used allegorically at the same time. In much epic literature a spiritual quest is often defined in terms of a wandering man (representing spiritual desire) seeks to return home to a loyal woman (representing the fulfilment of spiritual desire – the union of ‘active’ and ‘passive’). Ling deliberately drops the allegory and just presents the sexualized woman. He seems to be pointing toward a need to recognize the need to abandon the female subject as something overtly sexualized while demonstrating how potent the attraction is to buy into this. 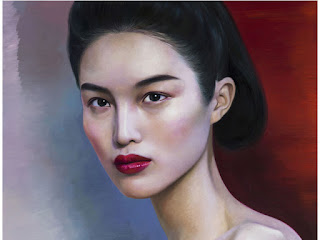 Some feminist artists – like Joan Semmel - have experimented with non-sexist visual imagery of sexual relationships and sexual union. Ling’s work also seems to point to this hopeful possibility that with the disintegration of an ideology, there still may be hope for greater humane development.
Posted by Daniel Gauss at 6:05 PM