Li Hongbo at Klein Sun Gallery - Overreliance on the Word 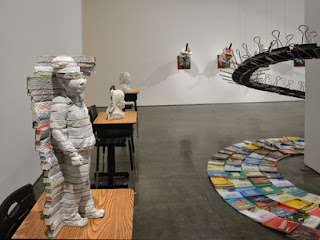 In his current show at Klein Sun Gallery, Li Hongbo calls our attention to the overwhelmingly textual basis of the world-wide globalized educational system, along with the numerous problems that come along with education systems so dependent on the written word and so lacking in meaningfully experiential components. 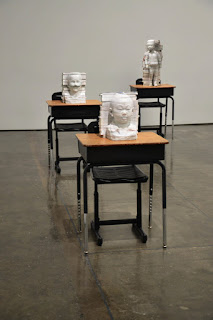 Li has several sculptures of placid, expressionless students carved out of stacks of cheap textbooks and workbooks. This seems to lead directly into the question of how the continual engagement with the written word, through education, translates into the behavior and self-development of each person. The best answer to this question would seem to come from Phillip W. Jackson’s concept of ‘the hidden curriculum’. In his book “Life in Classrooms” (1968) Jackson pointed out that when you take active, young bodies and restrict them behind desks for 6 or 7 hours a day, presenting them with written texts about history, science, math etc. , for which they will be rewarded for correct answers and punished for wrong answers, the students may pick up the history, science and math, but the most enduring concept they learn is ‘passivity works’ - obedience to authority figures is the way to go. Along with the knowledge that we pick up in school, in the very process of acquiring this knowledge we are also subjected to hidden values that breed passivity. 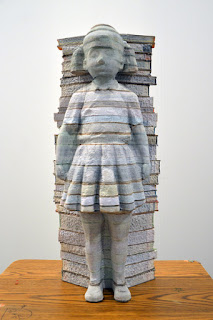 Of course, the contents of our text books are often problematic as well. Jean Anyon did a landmark study of US History textbooks in the classrooms of working class American students. She discovered that in regard to the history of labor unions, only those unions which had collaborated subserviently with management were included in the texts.  The unions which took defiant stances and actively fought for the rights of workers were simply not mentioned. Anyon concluded that working class students were being sent the message – Do not protest! Collaborate! Work with your superiors! Working with your betters is always the right way to go! 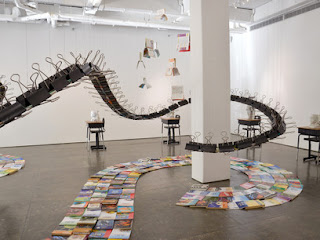 We see nonsense all throughout our text books and especially our history textbooks.  The first European settlers to North America, at Roanoke, probably joined a Native American tribe but this is not reported because ‘integration’ is supposed to go the other way – people of color integrate into white, industrialized societies; white people do not ’regress’ into ‘savage’ cultures. And, of course, the biggest lie your US history book ever told was about the great president Abraham Lincoln who actively sought war with the South, thus causing the deaths of over 600,000 men, instead of seeking creative and peaceful solutions to the problem of slavery.  That the Civil War was fought to end slavery is a lie as well since there was no plan to help the freed black folks after slavery and they became powerless and dirt poor share croppers, while northern carpet-baggers flooded the South afterwards to turn insane profits (the real reason for the war). 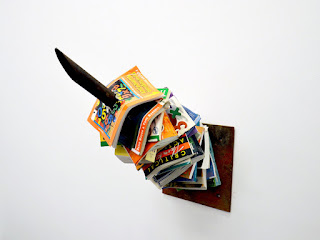 The huge binders crisscrossing the show, to me, represent the crippling and oppressive effects of the grading system, which is the Charybdis to the Scylla of the textbook. To grade students is to degrade students. The only justification ever given for grading is that it supposedly helps to ensure motivation, which, obviously, points to the fact that force has to be used to get children to learn what others want them to learn. A system without grading would be a system of freedom and self-discovery and the realization of full human potential. We do not have a humane system of education where students are free to pursue the most meaningful and existential threads through self-discovery, we have state approved text books and a grading system to weed out who cooperates and who does not. 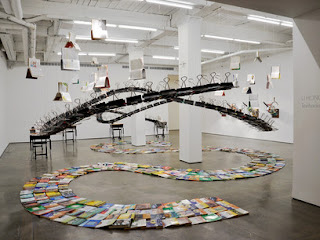