Bourbon is a type of whiskey originating from the American South (made from corn), deriving its name from the Bourbon dynasty in Europe. Steve Moseley has been taking empty Bourbon bottles and creating little religious and socio-political dioramas inside of them. 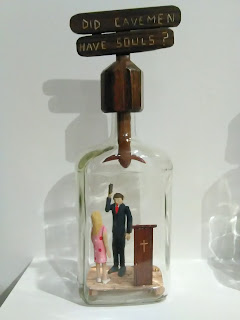 Here we see a child confronting an evangelical minister with the question of whether cavemen had souls or not. Moseley seems interested in presenting the drama of a child asking a type of question she is not supposed to ask, since either a "yes" or"no" from the minister would undermine the entire belief system he has been promoting (If cavemen did have souls, why send Jesus to earth? If they didn't, why would God sacrifice zillions of pre-Christian people to oblivion?).

Actually (exercising my pedanticism here), as a guy who has studied the evolution of religious thought, the religion of hunter-gatherers was 'shamanism', which was not a religion of 'self-development'. It was a religion involving specialized holy men/women who could connect to the spirit realm to gain very practical help for hunting and gathering societies (the curing of illnesses, success in hunting, pain-free birth for the women of the group etc.). The concept of the soul and spiritual development only happens when cities begin to arise and ethics gets tied up with religion. Hunter-gatherers believed/believe their spirits survive death, but they do not believe in souls that will be judged. But, pedanticism aside, Moseley's little drama works fine as a little peek into the religious life of the deep South. 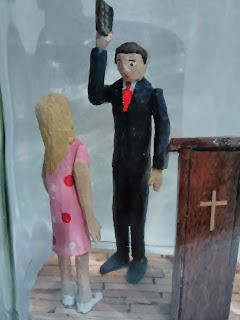 Here is Jesus playing basketball against some demons. 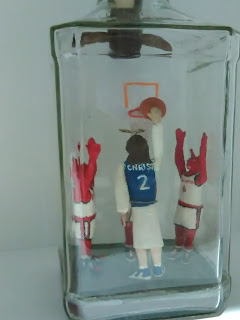 Moseley can be satirizing the extent to which our concept of spiritual development is tied up with notions of competition. If we want to gain salvation we must literally "beat" the devil. 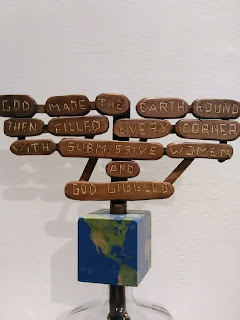 Here Moseley pokes fun at the out-dated values concerning women found in the Bible as Adam tries to hand Eve some dish-washing powder. 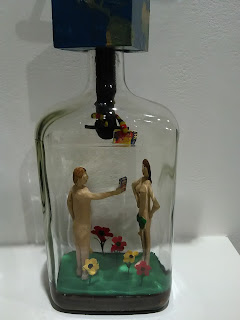 This bottle is labeled: If you vote for Trump you will receive no absolution (forgiveness). 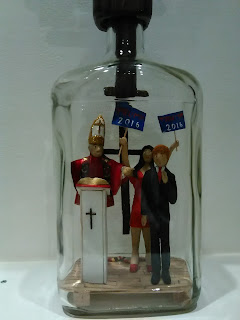 Here the Pope is asking Jesus to wear nicer clothes. 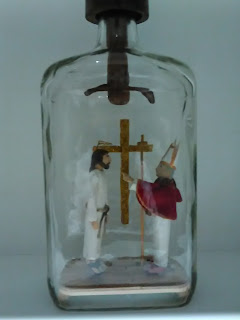 So why create these scenes in Bourbon bottles? Well, Moseley is from the South and he could be equating the absurdity in the bottles to the potency of this very Southern liquor. This is part of the culture of the deep, white South and it is absorbed as easily as Bourbon. The scenes definitely are surrogates for the Bourbon.

What is interesting to me is that wine is very symbolic in the Christian religious tradition. When one drinks wine, one becomes elevated...one becomes more tolerant, loving, social, forgiving; wine was the blood of God that changed us for the better. Jesus was the true vine and one drank wine to remember Him. Bourbon, on the other hand, with its ties to Southern culture and history, seems to be a corrupter of God's true word. It seems to indicate that man cannot live on an alcoholic beverage alone - along with the intoxication one must have a sound intellectual and moral basis in place, or one might be drunk enough to vote for an utter buffoon like Trump, and rightly lose all possibilities for forgiveness. 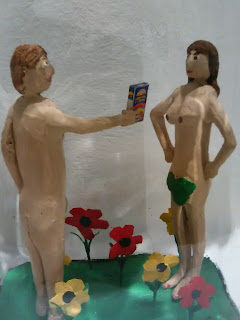 Adam and Eve after eating from the apple: 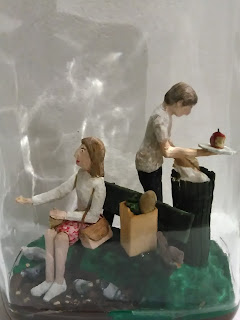 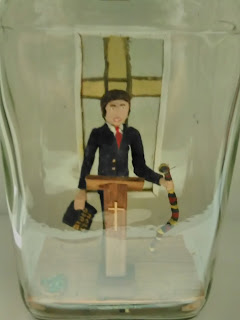