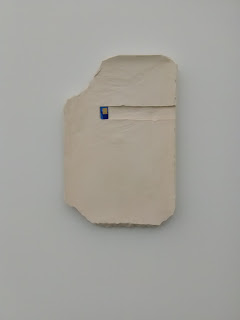 When Tania Pérez Córdova borrows something, it becomes art. She borrowed a sim card from a friend and set it in a porcelain block, borrowed a debit card and imprinted it into a block of clay, borrowed two black piano keys and inserted them into foam. The artist’s compulsive desire to create the meaningfully useless forces the lender to pause and take steps, if desired, to return to normal. An important token of one’s social capital disappears and one invariably races to replace it. The mere inconvenience shows how embedded one is in a particular economic class.

Of course, there are people in the world who live without sim and debit cards – the poor and marginalized. Perhaps Pérez Córdova asks her lenders whether they are willing to live like ‘them’? Is it truly possible to see to the needs of the economically deprived while our priority is pursuing our own excellence and ease? What would it take for a person to excel without neglecting responsibility to others?

Brecht wanted his plays to betray theatrical artificiality to indicate responsibilities outside the artistic venue and the MCA follows suit with overtly artificial backdrops displaying real stuff belonging to real people outside the gallery. For example, Pérez Córdova has painted the patterns of a dress and shirt of two Chicagoans who periodically drop by in the clothing from which the patterns were taken. Do I distance myself from these others or become more humane and empathic by looking at and reflecting on what they chose to wear?

A ceiling fan spins exceedingly slowly, like in cinematic slow-motion. A green marker is in a cup of water which slowly becomes greener. Incense slowly burns. Styrofoam slowly turns yellow. From this we might feel the rhythm of our lives is not of the deeper rhythm of incubation and maturation and is certainly of greater tempo than the glacial pace of humane global development.

There is a cigarette stub from a man who wants to stop smoking. Foam shows an indentation of a man’s flexed bicep. In this evidence of processes, like the evidence of ‘smoke’, we recognize both the lack of agency and the demonstration of agency, while seeking more than the ex post facto. 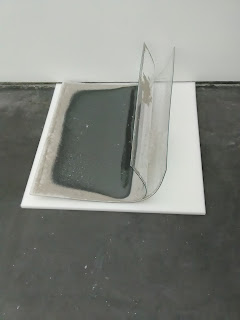 Prescription contact lenses have been abandoned. Is this person suffering? Has this person completed a satisfactory view of the outer-world, allowing the appropriation of objects as symbols to now investigate inner reality? Curved glass surrounds a purple bag of miracles – glass allows one to safely look at but not engage something. Bronze window frames aggrandize the looking-outward process.


One enters a film set in which plot is replaced by a confrontation with our complacency, the extent to which we may or may not freely make social decisions, and where the compelling forces in our lives come from. In his first curatorial offering for the MCA, José Esparza Chong Cuy successfully brings in a risky and provocative show requiring active imaginative engagement and concerted self-reflection from the participant-viewer.
Posted by Daniel Gauss at 12:51 PM