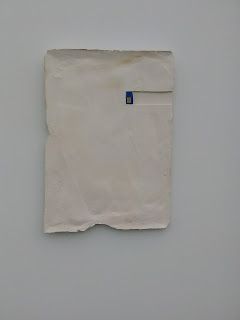 When Tania Pérez Córdova borrows something, it becomes art. She borrowed a SIM card from a friend and placed it in a porcelain block. She borrowed two black piano keys and put them into a chunk of orange foam. A guitar string is attached to a marble structure and one stylish Swarovski earring is dangling on display. This leads to a ‘pausing’ process on the part of the lender of the object, and thus, through this process, the artist becomes a type of disrupter. She made it more difficult, temporarily, for the pianist or guitarist to ply his trade. The musicians were forced to pause, assess the significance of the loss of the objects borrowed and take deliberate measures to return to normal, if they so chose. In regard to the loss of a SIM card or a nice earring, one loses a bit of his/her social capital and pauses to reflect on whether to take deliberate action to replace that. 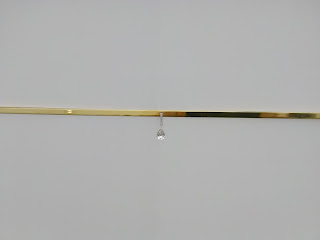 There are, after all, people who live without SIM cards and Swarovski earrings – the marginalized poor of the world. To me, the artist could be asking those she borrows from whether they are willing to live like ‘them’. After all, Pérez Córdova comes from Mexico City, a city filled with thousands of homeless ‘street’ children in a country with the 13th strongest economy in the world. An important token of one’s social capital disappears and, I would guess, one invariably races to replace it. The mere inconvenience shows how embedded one is in an economic class and how one’s priority might be to maintain status more than see to the needs of economically deprived others. Is it truly possible to be of any service while our priority is pursuing our own excellence and ease? What type of society would it take for a person to excel without neglecting responsibility to others? 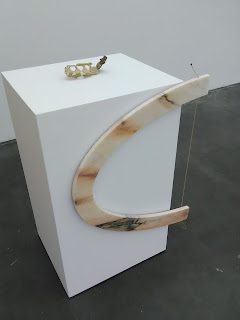 Like Duchamp, Pérez Córdova renders objects useless but she is unlike Duchamp in that his ready-made pieces could conceivably be reclaimed by those in the real world – as was the case when a custodian inadvertently took one of Duchamp’s shovels from a museum exhibit to remove snow from the sidewalk outside. The mere placing of an object in a gallery does not, then, entail a change of interpretive meaning for Pérez Cordova’s pieces (as it does for Duchamp’s); the act of disruption itself and our being able to put ourselves in the places of the disrupted becomes key. 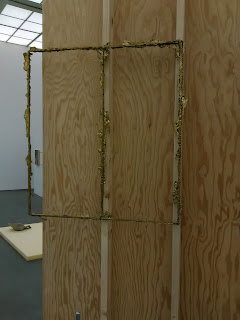 Compulsively rendering significant, personal things useless, thus complicating a person’s life and nudging one toward contemplation of that life, its value and the economic, technological, social and psychological forces that have created one’s life, imputes meaning to the work as does the realization that the person whose borrowed object we look at exists outside of the gallery. We witness relics of personal disruption and imagine how the other was affected, thus establishing a fellow feeling and awareness that we are, basically, these folks. The artist derives her aesthetic value and the economic value of the art from her capacity to disturb the smooth flow of life and compel a person to question, even for a short time, the practical reality and status of his/her life. 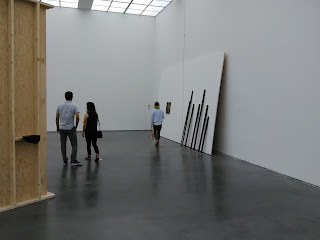 The gallery for these pieces at the Museum of Contemporary Art in Chicago has been made to look like a movie set with scenery scattered around. Brecht wanted his theater productions to betray the artificiality of the artistic process to keep people awake to their responsibilities outside the theater and that is what we get here – a deliberately artificial backdrop with real stuff belonging to real people who are still alive somewhere out there, outside the gallery. The artistic subject thus disappears and we are drawn closer to the other. The wall between viewer and viewed which is often the case in a gallery or museum is dissolved and by examining the other in a gallery I no longer reinforce my egocentric supremacy, I become more humane and connected. 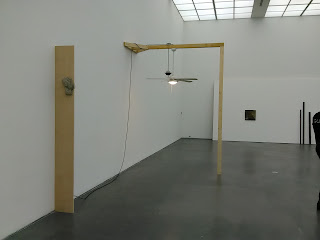 In another part of the show a ceiling fan spins in an agonizingly slow manner, utilizing the motor of a disco ball, like a slow-motion scene in a film. Pérez Córdova places a lime green marker in a cup of water and the water slowly becomes more and more green. Incense slowly burns. Styrofoam slowly turns yellow. A disrupter is perhaps needed because the rhythm of our lives is often geared away from a deeper rhythm of incubation and self-development. Why do slow processes look so absurd to us? How badly have we been corrupted? 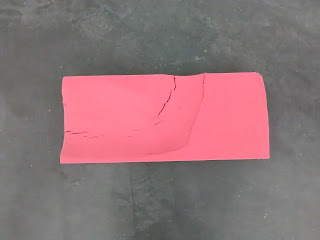 Pérez Córdova has also painted two patterns taken from a dress and a shirt of Chicagoans who will periodically drop by the show in the actual clothing from which the patterns were taken. We are invited to imagine the thought-processes of these folks as they made their choices and we become aware of the vulnerabilities and desires involved in our own choices as to how we are going to present ourselves. 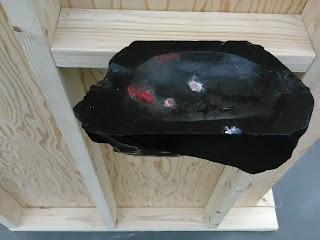 We see ashes from a cigarette from a man who wants to stop smoking mixed among bird droppings in a beautiful marble container - a remnant of his failed struggle for him and us to consider. Pink foam with a muscle indentation of a man’s bicep becomes another remnant of the actual, real and physical. In this evidence of processes, like the evidence of ‘smoke’, we recognize both the lack of agency and the demonstration of agency, while seeking more than the ex post facto, hoping to reach beyond remnants of experience to get to possibilities for personal transformation in the ex ante. 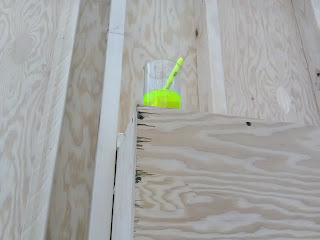 Twelve necklaces hang from the ceiling attached to each other end-to-end - apparently eleven cheap ones and one gold one – bunching up inside a rough container on the ground. Marx’s trickle-down theory of ideology? The rich create, the poor emulate? Everything we do is a part of a competitive process to emulate members of a specific social class? Is the Swarovski earring an object of our desire or an object of our contempt? What should it be? The artist places makeup in black marble bars - two forms of the purely decorative – makeup is used to disguise possible skin flaws, to leave one beyond reproach, to make one look like everyone else, to make oneself an object of desire. 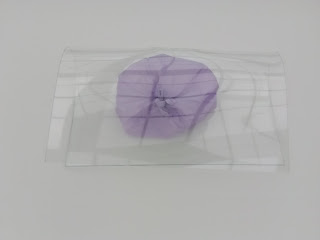 Prescription contact lenses have been abandoned. Is this person suffering or is this person now looking inside instead at what has been truly motivating him/her? Has this person completed a satisfactory view of the outer-world allowing the appropriation of objects as symbols to now investigate inner reality? There is curved glass surrounding a purple bag of miracles – glass allows one to safely look at but not engage something. We safely look at but do not meaningfully engage the world? Windows are bringers of light but keepers of distance - the essence of art: look, don’t touch. Bronze window frames are there to aggrandize or commemorate the looking outward process? 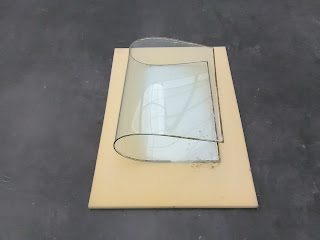 This was a risky and provocative show requiring active imaginative engagement and concerted self-reflection from the participant-viewer. The show would have been better had the MCA provided a little more in the way of background material for people to read while looking at the pieces. This was really a show where you needed some background info in order to appreciate the pieces, in my humble opinion. So, to this extent, I feel the MCA failed in making the show as accessible as it could have been to folks. I was fortunate enough to have been given the show’s catalogue and did a great deal of research on the artist and previous shows – most folks were not able to do this and may not have been fully engaged by the work. 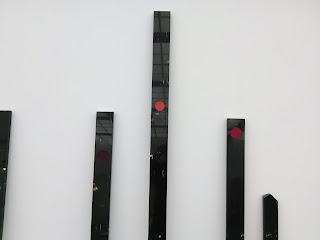