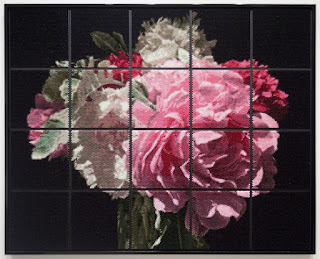 Christian Faur seems to be seeking a type of language which reveals its limits as it imparts, through its limits, even greater meaning or intensity to what it expresses. Frank Lloyd Wright said that every material possesses its own message and Faur seems to seek materials that have, despite or because of severe restrictive limits, a potential for expressing more than an ordinary expressive tool like math, logic or a sound/text-based language. The unsayable is best unsaid through a flawed or highly restrictive language which points to the unsayable through its very material limitations. The language we often use is a very real thing, like something material, and other things can be used in unconventional ways to possess and convey what language cannot convey easily or at all. This is, to me, the core meaning of Faur’s amazing show at the Kim Foster Gallery in Chelsea. 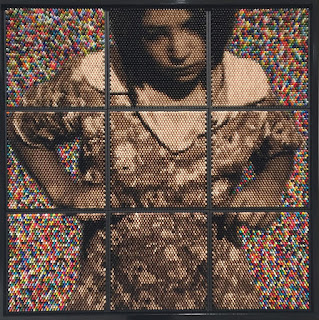 Faur also seems to ask what it is about sound and/or text that allows it to hide itself so effectively and point you toward something else, some meaning which seems to be a part of, and not a construction based on, some phenomenon. Meaning exists independently of an object or process, yet the medium of spoken/written language camouflages itself so well that it becomes virtually invisible and creates a surrogate world of meanings within our minds often confused with the real world. Faur seems to imply in his show that the most expressive material possesses something that tricks you into accepting meaning but also advertises its trickster nature. He seems to imply that a language which camouflages itself so you do not notice it when you use it, does not really get to the pith of things. A ‘flawed’ or burdensome, noticeably restrictive language opens meanings to even deeper penetration than a language which remains relatively invisible. 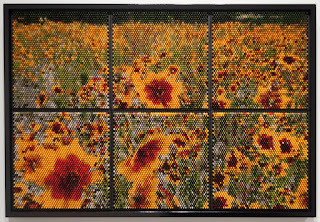 So, Faur is shooting to make the invisible visible and, in science, this is often done through mathematics. Math provides identity, elicits relationships, charts growth and decline, predicts motion relative to other objects, but what if you want to understand the real essence of a tree or an ecosystem or injustice or the weird beauty of the life of a Mud Dauber (a wasp which constructs mud structures in which to deposit spiders it has placed in suspended animation as food for baby Daubers once they hatch) or the full moon or the constellation Orion or why you respond to evil the way you do or a zillion other things? Math and the scientific method fall way short – simple description falls short. There is something more called meaning and it is bigger than description. To me Faur is saying, “If you want this bigger stuff, you have to jerry rig new communication tools. Poetry, surrealism, symbolism, zen koans, Gauguin’s use of color etc.” 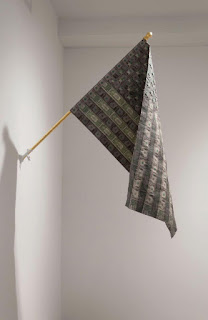 So we might see one of Faur’s pieces from a distance and shrug saying, “Oh, these are sunflowers.” But then as we approach we realize, “Oh, wow, these are a load of differently colored crayons perfectly ordered as pixels.” Are they sunflowers or are they crayons? This whole process of recognizing crayons underlying sunflowers approximates the realization that everything we see is, in reality, wavelengths of light. Just as we really see the tips of crayons making up the sunflowers, we really see photons making up sunflowers in reality. My immediate response to and experience of sunflowers can be affected by this knowledge and heighted by the realization of how complex the process of perception is. It is not a knowledge of sunflowers that heightens this experience of sunflowers but an awareness of the complex processes of light and the human eye and mind and how this may have evolved that adds to the wonder of this experience of sunflowers. The crayons reveal the sunflowers but declare themselves to be tricksters in the process, the childlike joy possessed in the crayon itself becomes manifest in the process of visual revelation and so the material becomes the message. 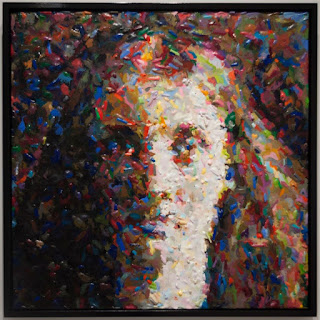 Seeing crayons as sunflowers, therefore, approximates an insight we could possibly have, but never really seem to have, which would constantly reveal to us that whatever we see is never what we call it since it is light of differing types of wavelengths and not objects themselves. But this insight never really registers with us, we have to remind ourselves, because light, like language, camouflages itself as a messenger and makes us believe we are seeing ‘things’. Why do we never realize we are seeing light? How does light deceive us so easily? Even when we tell ourselves we are seeing light, this usually has no impact or meaning. So Faur is approximating an insight we feel we should be able to get but never really do. The way we experience the world is based on a huge deception that Faur quixotically and playfully attempts to fix with crayons. 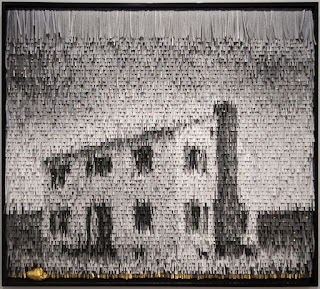 In another piece, Faur takes zillions of little strips of text from the Quran, ‘Old’ Testament and ‘New’ Testament and uses them to construct an image of one of those buildings we have all seen in documentaries of the nuclear explosions in the desert near Las Vegas. We see a building as it stands just before it is to be obliterated by a nuclear blast. We can also see that some of the tips of the strips of text are gilded and under the image is a golden heart, apparently representing the idol of the Golden Calf. To me, we see religious text as a messenger that has not advertised its trickster nature enough so that, unfortunately, most folks wind up taking it 100% literally. A message meant to point to peaceful, individual, humane development thus becomes a battle cry to reduce other cultures, peoples and religions to smithereens. 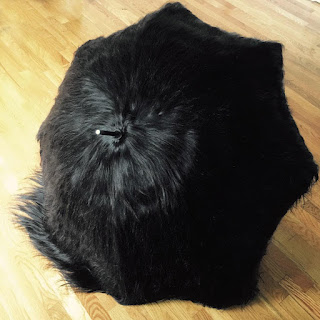 We also see an American flag comprised of dollar bills sewn together. Yes, we have a democratic government because this is the best system to generate wealth for some. Faur also uses his crayons as pixels to represent an old photo by Dorothea Lange. When Lange was working, color photos were too expensive to make. Crayons now become the ‘arte povera’ way, perhaps, to add color to this documentary material. 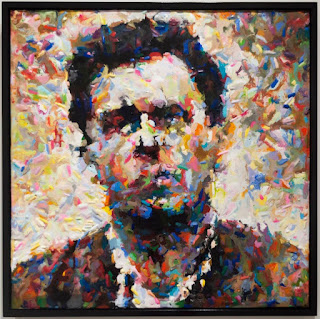 Faur also experiments by laying crayons flat on a birch plywood backing and melting them together using a blowtorch. The shape of the crayons causes the appearance of brush strokes while the melting of the crayons together creates a semi-abstract piece which Faur pointed out to me he cannot control perfectly and which often yields unpredictably amazing results. Faur depicts the famous photo of Wittgenstein and a photo of a woman Faur thought to be a typical working-class woman of Wittgenstein’s time, but which now turns out to be Virginia Woolf’s mother. Wittgenstein’s famous phrase is also encoded in another piece, using colors for sounds: “What we cannot speak about we must pass over in silence.” Faur possibly asks what cultural elements must be inherited or learned, and by whom from whom, to ‘decode’ such encrypted insights. 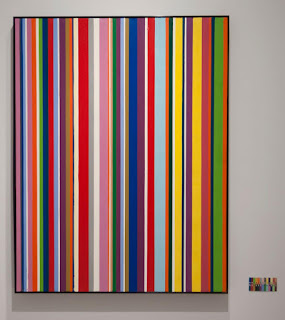 Finally, you cannot miss the umbrella made of real human hair, which seems partly inspired by Meret Oppenheim’s ‘Fur Breakfast’ at MoMA. These days human hair has become a valued and expensive commodity. A temple in India, for instance, where pilgrims have their hair shaved as a sign of humility, makes millions a year from that largesse. What better way to demonstrate your social standing through conspicuous consumption than to use the hair of poor women from developing countries to provide you with protection from a storm?

This show ended in September 2017. Re-posted from wsimag.com