“Whether born from experience or inherent physiological or cultural differences our gender and national origins may and will make a difference in our judging.” U.S. Supreme Court Justice Sonia Sotomayor 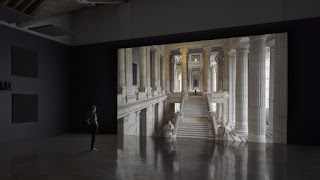 {{{click on images to enlarge them}}}
In 1982 Carol Gilligan published In a Different Voice, a book that purported to demonstrate that women and men had different views concerning the concept of justice. Gilligan argued that, in general, men believed in a universal ‘right and wrong’ and that punishment should naturally follow wrong actions. Women, on the other hand, seemed to evidence an ‘ethic of care’ which looked at why people did things and which left a door open to greater degrees of mercy for harmful actions. Gilligan stressed that the ‘ethic of care’ was not tied exclusively to women, yet, it seemed much more prevalent among the women participants in her study.
Of course, some early feminists believed that the greater inclusion of women into society could initiate a moral transformation. Elizabeth Cady Stanton identified the prevailing values of a corrupt America with the gender of the men who ran it. Through either biology or social conditioning (who really cared?) women were clearly more humane and the world needed a strong infusion of them in positions of power. It may not be uncommon among folks who are oppressed to believe that they hold the key to social transformation. Martin Luther King Jr. exhorted African Americans to become a moral ‘thermostat’ and not a moral ‘thermometer’ in US society – integration was essential but, based on insights and humanity gained through generations of injustice, black folks should integrate as moral reformers. Integration into what existed (merely being a thermometer) was not a viable option, integrating as reformers (becoming a thermostat) was a possible destiny for black folks in the U.S.
So a big question becomes whether the morally unacceptable structure of the world (with classism, corruption, institutionalized racism, greed, sexism, injustice, intolerance, war etc.) is based on male values and aggression or is the world as we find it the inevitable result of societies meeting survival needs badly? Could gender have saved the world? 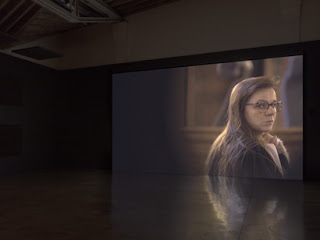 All of these issues were brought to light for me through Carey Young’s video Palais de Justice at the Paula Cooper Gallery. In this video Young secretly has recorded the proceedings of various female judges at the Palais de Justice in Brussels. These women appear to be thermometers as they function among the grand, classically-inspired pillars of the Palais. Observing these female judges would seem to indicate that the structure of traditional justice tolerates no moral innovation merely based on the inclusion of gender. Does this mean the female judges are embracing male values or was the structure of justice gender-neutral from the start and just dominated by men? Are women abandoning their predisposition toward mercy (no longer trying to understand and heal the underlying causes of crime) and walking into and taking places in a world of punishment and deterrence created by men? Or, were men merely temporarily taking up all the good justice system jobs which were created, somehow, without the influence of some type of gender predisposition?
The video is visually dynamic and remarkable to watch on the large screen in Paula Cooper’s Gallery at 534 W. 21st, and you should really drop by, if you can, to see this approximately 18 minute piece. The only sounds are a vague, ominous hum interrupted by opening and closing doors. Toward the beginning, in a possibly self-reflexive gesture, we see a young woman sketching some of the huge pillars of the Palais, a grandiose building from the mid-19th century brought into the world by Leopold II, shortly before he began his reign of butchery in the Congo. Perhaps as a tip of the hat to ‘The Beauty Myth’ we see a pair of sexy legs dangling into view from an otherwise obscured window sill. That we are in man’s country is shown by a cloak room filled with photos of eminent male judges of the past and the judicial robes of current judges. There is a portrait of a jurist jutting his finger in the air to make an impassioned point. The Palais is shown as an imposing structure representing the supposition that the law is universal, fair, impartial and eternal – people are dwarfed by the interior architecture. We see them strolling through huge corridors and hallways conveying the feeling that 100 years from now they will all be dead but the Palais will still be there, serving the same function. One gets the feeling that the Palais swallows the identity and will of each person who works there. 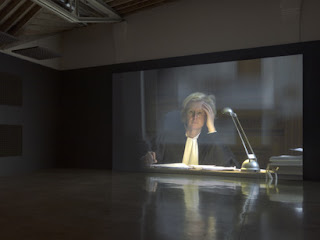 Young is somehow able to get video shots through little porthole-like windows in the doors of the courtrooms. These allow a sometimes blurred and sometimes quite clear image of a judge’s face encircled by the outline of the window. We see female judges engrossed in arguments, speaking heatedly, some seem to be day-dreaming, one seems to be smiling in reverie at her email, some seem to be in a stupor of boredom. At times Young focuses on the judges as they play with their hair and she sometimes seems to focus on the differing hairstyles, as the judges seem eager to retain such touches of femininity in this male-dominated world. In one scene, the comic highpoint of the video, we see a judge’s face obscured by the back of the head of another woman. One sits there dying to see the expression on the judge’s face, just because it is obscured for so long. When the woman blocking her face finally moves, we see a look of pure, abject, slack-jawed stupefaction.
It could be that Gilligan’s assertion that women possess differing concepts of justice applied while women, in the US, were part of an overtly oppressed group of people. Now that gender equality has been significantly achieved, would women still so strongly manifest an ‘ethic of care’? Were folks just buying in to gender stereotypes by believing in gender-differences concerning moral judgments and attitudes toward justice? Perhaps studies should have been done throughout America and an ‘ethic of care’ might have been demonstrated among all oppressed or victimized groups at that time. Maybe this is a class thing and not a woman thing. With greater social integration, do these groups lose their moral or critical edge? Does such an edge even exist? If a female judge now acts as a male judge has always acted, showing a disdain for mercy and social reform to eliminate the engines of crime in society, has she become more ‘male’ or has she just embraced what the male judge had to embrace before her? 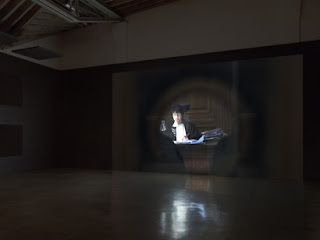 This review begins with a quote from Sonia Sotomayor which seems to echo the belief in what Gilligan wrote. Yet, the United States justice system clearly reflects what Gilligan would have considered the male orientation toward justice. Juries, for example, are not allowed to consider why a person committed a crime – this is left for the judge during sentencing if the person is found guilty. Every person is considered ‘responsible’ for his/her actions. Either the person did something or he/she did not do something and it is as simple as that. The system is said to be objective and fair and the judge and jury are said to be impartial. If you cannot afford an attorney, they provide one (free attorneys are often severely over-worked and 90% of their clients usually just plead guilty).
Rising from a poor neighborhood in the Bronx, successfully making it through Yale Law School, Sotomayor winds up taking a job at the DA’s office in Manhattan, often prosecuting men of color from impoverished and violent neighborhoods. The US prison system has a disproportionate percentage of men of color and there have been few social reform movements to fix that. Given that she makes a statement that seems clearly derived from the work of Gilligan and other feminists, would it not be fair to ask whether she considers that neighborhoods of extreme poverty, drugs, violence and racism might be engines of crime? Do they mention this possibility at Ivy-League law schools or is the focus purely on the ‘male’ approach to justice? Given Sotomayor’s quote above, should we not be compelled to ask whether Sotomayor ever considered alternatives to prosecuting poor folks similar to the poor folks she grew up with, perhaps using her immense gifts to attempt to bring change and humanity to the inner city?
Unfortunately, Young’s video seems to assert that it is going to take more than gender to change things.
Posted by Daniel Gauss at 6:18 AM