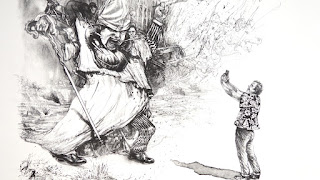 After years of addressing political corruption and the tenacity of various social evils in her native South Africa, Diane Victor arrived in the USA for a residency project just after the Trump inauguration. In the lithograph Little Dystopia (2017), one of two lithographs she made at the Center for Contemporary Printmaking in Connecticut, we see an older, paunchy, white man, in a business suit, seated in front of a diorama-like community, with a dreamy look of gratification on his face. He seems to have created such havoc that sharks circle the area around which he has dominion. He has added entropy to a system requiring humane vision and guidance. He wears a dunce cap, while the scarred woman next to him holds a laurel wreath behind his head as she takes a selfie with the powerful man. To his right are the huddled masses, passively waiting on the sidelines, unnoticed by this guy absorbed in his own scheming. They are the overlooked, powerless consequences of his base desires. But, is that really a dunce cap, or might it be, à la Goya’s The Inquisition Tribunal, an auto-da-fé hat for a heretic about to be burned at the stake? 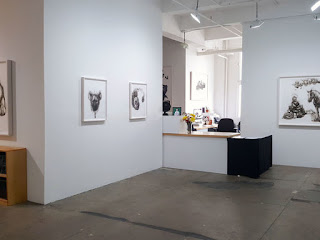 Indeed, is the woman taking the selfie in order to document a corrosive influence in her life or does she want some of the absurd prestige of this man to rub off on her once she posts the image on social media? We see much of this type of ambiguity in Victor’s show at David Krut Projects, New York. In the other lithograph she made in Connecticut, Showing Truth to Power (2017), a man in a Hawaiian shirt is photographing a type of raging colossus. Is the man smiling because he has finally visually captured the quintessence of greed and corruption in such a compelling manner that change has to result? Or is he merely pleased to be in the presence of the self-righteous and self-absorbed celebrity that currently makes the world go ‘round? 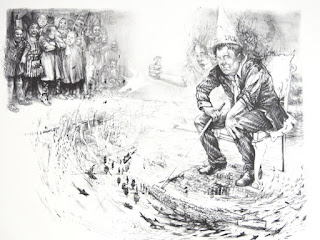 The question of whether a knowledge of evil reflected back to evil is sufficient to change evil seems implied here. Are we spending too much time capturing images of and documenting evil instead of taking more effective action against it? Do we, paradoxically, derive so much gratification from knowing we can perceive and document evil that we stop short of the much more difficult work of changing it? Are we thinking, perhaps, that there is a division of labor in the output of social progress and we all get the easy part of photographing evil, while the harder part of actually bringing about justice and peace is supposed to be picked up by someone else? That particular help-wanted ad stays unanswered? And what is so difficult about changing evil – perhaps we do not want to commit to the unromantic principles of pacifism and non-violent resistance that are really required? To me this might be the message Victor has more strongly added to her body of work since coming to the USA and witnessing our current political carnage. 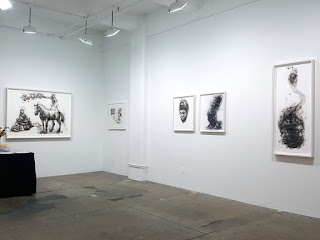 Also in the show are some recent “smoke-drawings” by Victor done at a residency in Brooklyn arranged by the gallery. These are drawings accomplished using the technique of “fumage” – capturing the carbon soot from candle smoke onto paper (which has to be, obviously, suspended face-down in the air with the burning candle under it). The process of drawing or painting requires a use of a deliberate and active force on paper. Fumage becomes a type of action-art in which the artist refrains from the traditional use of force to create. The process becomes more about reception than expression. Indeed, the process is so delicate compared to drawing or painting that the carbon soot can easily be smudged or removed from the surface of the paper and the piece must be framed immediately after completion. In the process of fumage you are also subverting the second law of thermodynamics in that you are harnessing chaos to a creative end. What should lead to a waste of energy is channeled into a recycling of what might have been lost. So the artist’s choice of using this less aggressive form of creation perhaps mirrors a choice social progressives in the past often made to renounce the use of force as being an ineffective means to bring real change. These works also possess a more ghostly and unearthly quality due to the effects of this process. 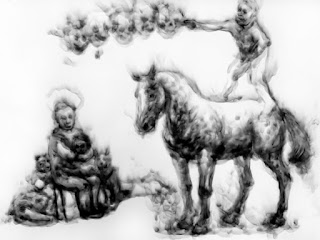 The smoke drawings can be very enigmatic. In A little matter ignored (2017) we find a relatively straight-forward political parable in which a man in a suit seems to have engaged a group in such an intensely distractive dialogue that they simply do not notice the elephant in the room. In a work, however, as mysterious as Giorgione’s Tempest, Circus lives, spinning truths (2017), we see a figure on horseback from whose finger 5 skulls emanate while a mother and child surrounded by hyenas and an alligator look on. Perhaps the skulls represent the unwelcome truth that things are just not getting better, despite previous promises, and that there is no indication that things will. A horse is often used as a symbol of transition in art, and this horse is just not moving. It is more of a platform than a horse. The woman and her child are surrounded by threatening creatures (in-between hunger spells) and the performer does not ride in with optimistic omens. 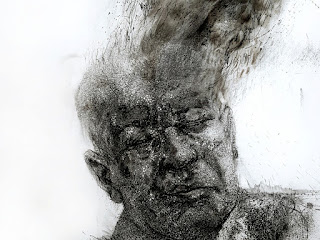 In The man who lost his head we see smoke rising from the left side of a man’s head as if he has been shot by a high impact bullet, blood and gore being propelled outward. Yet the man has such a serene expression on his face that we should probably not take this image so literally. The smoke rising from him may represent his overcoming or releasing of aggression or hatred or some other painful but compelling inner response which had been preventing his humane development. Or, since Victor seems to invite multiple interpretations in many pieces, this smoke rising out of him could be his basic life force – the serene look due to his escape from having to be complicit in a world of corruption in desperate need of a type of deliverance we may no longer find ourselves so easily able to believe in or effectively work for. 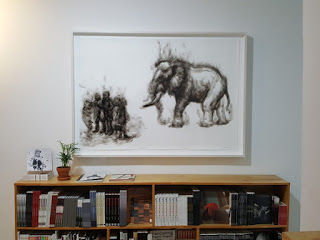 This current show at David Krut Projects, New York, runs until March 10th at the Chelsea location: 526 W. 26th Street, Suite 816. In conjunction with this show The Brooklyn College Library is also hosting some pieces by Victor spanning the years 2009 – 2017. That show will close on March 2nd.