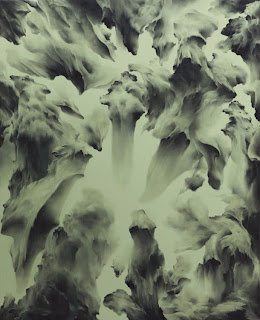 Everyone is familiar with Jack the Dripper - Jackson Pollock.  Pollock literally walked around and over his canvases as he dripped paint on them with a stick.


In the video above Pollock states that he wants to "...express..." his "...feelings and not illustrate them."  This is the essence of what has become called 'process art.'  A process artist does not have a particular image in mind when he begins a painting. He feels a psychological need to 'act' or convey.  The result of the painting is due to a spiritually or psychologically initiated process within the painter.  In fact, Pollock compares his style to that of Native American sand-painters.  The painting reflects the process, yet the image is often amazingly complex and engrossing and it challenges the viewer to a deeper than normal level of interpretation.

Moon Beom is within this process artist tradition. He doesn't use a stick like Pollock, however - he uses his bare hands.  First he covers a canvas with one color of acrylic paint - indeed, he seems to like using either very 'cool' or very 'hot' colors.  He then takes an oil stick - basically a crayon of solid oil paint - and smudges the canvas with it.  He then begins rubbing into this smudge and spreading it around the canvas.  By doing this over and over - like massage! - he creates very bizarre looking images.  It's hard to find an exact parallel but the Kim Foster Gallery refers to the images as being 'lettuce-like.'  They seem like strange tissue-like images suspended in artificial relationships to each other.

Believe it or not, there is actually a type of study called "the psychology of color" and researchers have found that light green is the most soothing color to us (the color of nature) while red is the color that excites us the most.  People in red rooms have experienced increases in blood pressure just due to that color.  Above we see Moon's Secret Garden #320 and the overall effect is calming. In Secret Garden #540, we see a more fiery image dominated by two phallic looking structures. 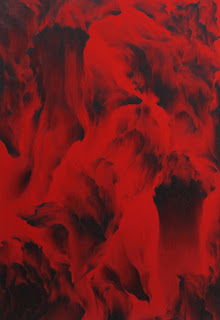 .
Did you know that in ancient Chinese culture, color was sometimes used as a form of 'chromotherapy' to heal physical ailments? The color red was used to increase blood circulation, for instance, while some of the cooler colors were felt to help end or decrease physical pain.
Moon's tissue-structures are, basically, the remains or residue of his physical motion. And they look like residue, although you'd have to call them quite elegant forms of residue. These look neither organic nor inorganic. They are like lovely waste by-products. The force and velocity of his movements in relation to the canvas become the elements of the language of the work, as do the color choices. Moon works in agitating or pacifying hues, in forceful or subtle movements. His movements are long or short, quick or lengthy. It's almost as if he is suggesting, through his new and unique approach to process art, that the 'real' language of our inner lives consists of such binary and opposing combinations.

Someone made a short video of the opening.  So if you are in a far-away place, here's a little bit of what a NY art gallery opening looks like: