Marepe and his 'necessities' at Anton Kern Gallery 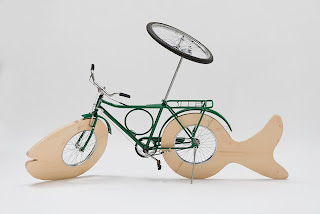 When Marcel Duchamp turned over a bathroom urinal, signed it and displayed it in a gallery, he was making a wry comment on the most obvious difference between ‘art’ and ‘non-art’ objects: art is, basically, useless. He literally took something ‘useful’ made it ‘useless’ and then was able to call it art. If art has no practical function then, obviously, the next questions become: what really is art (beyond the fact that something is useless) and what gives art its value (non-monetary and monetary)? 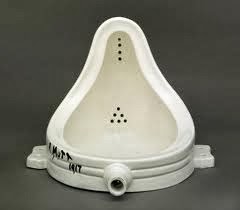 Duchamp, and a later artist like John Cage, would seem to have been deeply interested in what makes something 'art', how and why people approach art and what people hope to get from it. Can we, basically, call anything 'art' or what is it about an object or relationship between objects that confers the status of art on some things and not others? Even 'Pop' artists like Warhol and Oldenburg seemed to delve into these issues. 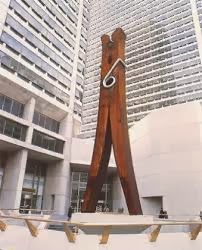 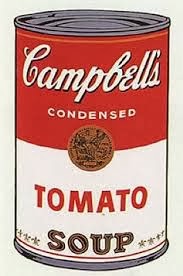 Duchamp's answer to the above question would seem to be that if a person is really thoughtful, he/she can probably even find meaning in an over-turned urinal. Basically art is not about objects but about meaningful engagement with the world. If seeking meaning is an important part of our lives, we can find meaning in a snow shovel (another of Duchamp's 'ready-made' art pieces). 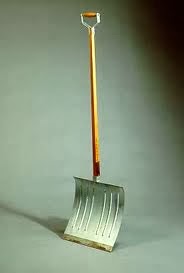 John Cage created art using deliberately random elements and many people found meaningful interpretations to his pieces. The implication is that we are surrounded by deeper meaning but often only seem to dig deeper when specifically challenged to do so when someone ‘officially’ declares himself an artist and a thing is blatantly classified as art. So Duchamp was not really interested, in his art, in just conveying a message - he was asking people to think about how they think about art and its interface with the world. When you look at a piece, what are the cognitive and emotional processes involved? Why do you look at art? What do you want to get from this process? How do you hope to change by looking at art? What do you expect art and artists to do for you? 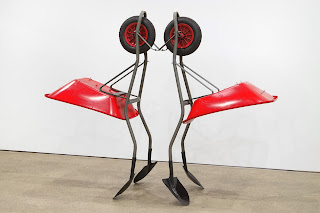 Marepe continues in this tradition with some significant tweaks. Whereas Duchamp called his pieces 'ready-mades,' Marepe calls his pieces 'necessities.' Marepe regularly presents objects of dire necessity in his economically under-developed area of Brasil. In each case we see that he renders one or more of these objects 'useless' as did Duchamp. He is basically taking Duchamp's urbanite approach and applying it to a rural and economically deprived setting - deriving a more political meaning from the alteration of objects in his immediate surroundings. We see wheel-barrows rendered useless along with ironing boards and cheap plastic chairs. Indeed, we see from Marepe's art that in the process of rendering necessities useless, we necessarily gain an extra political meaning. The wheel-barrows SHOULD be working. Wealth should be created to the betterment of the lives of the people of this area. Marepe's art seems to point at political or economic forces that are rendering these vitally necessary items useless. It's as if Marepe is saying that the people of his community want these things to work, want these things to be useful, but social and economic factors are such that these necessary objects are now purely aesthetic. Marepe takes Duchamp and politicizes him.

In the very first photo above we see one of Marepe's more whimsical and creative pieces. Marepe has rendered the bicycle incapable of being ridden by adding a wheel where one would not seem to be needed and by adding the wooden head and tail of a fish to the bike. Fish tend to symbolize, in the Christian tradition, abundance and nourishment (both spiritual and physical). Marepe creates a hybrid of movement and sustenance highlighting the dire need in his community for the type of abundance necessary to pursue greater meaning in life. St. Vincent de Paul (1581 - 1660) once said, "I cannot help save the souls of the poor in my village until we have the economic means to help people first develop souls." This merging of the physical, practical bicycle and the symbolism of the fish seems to incorporate that same sentiment. 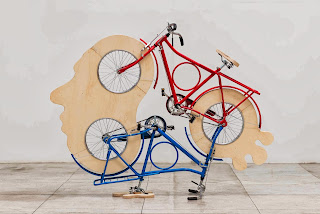 
By the way, do you like foreign, older films?  I have begun a new blog showcasing these types of films:  http://worldfilmfree.blogspot.com/
Posted by Daniel Gauss at 2:51 PM