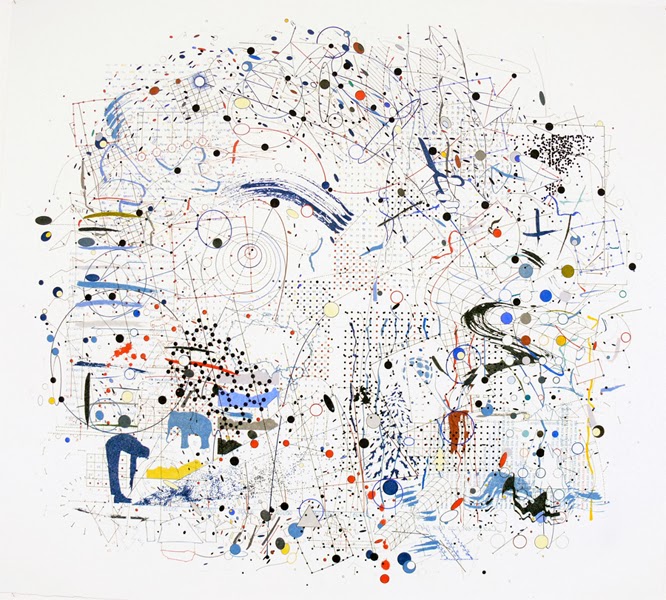 Paul Glabicki’s hyper-intellectual drawings derive from his experimental films.  At Kim Foster Gallery (which just seems to put up one amazing show after another) Glabicki has now created various drawings around the scientific theme of ‘relativity.’  So the basic idea seems to be to provide parallel images, both showing a relationship to each other, but yet also betraying some significant difference due to differences in the frame of reference of perception and experience.  Relativity, of course, indicates that to the person perceiving or experiencing a situation, what he/she sees or experiences may seem real, but it may conflict with the experiences and accounts of others.

Although Paul Glabicki’s amazing experimental films (he began making them 35 years ago) are in the process of being preserved, there are few of them I have been able to find online.  From what I can remember of his films, (seen mostly, in the past, at Experimental Film Coalition screenings at the Randolph Street Gallery in Chicago) Glabicki seems to present, in rapid succession, various scientific equations, meaningful scientific images (Muybridge photos of walking men come to mind) and various attempts at measurement. 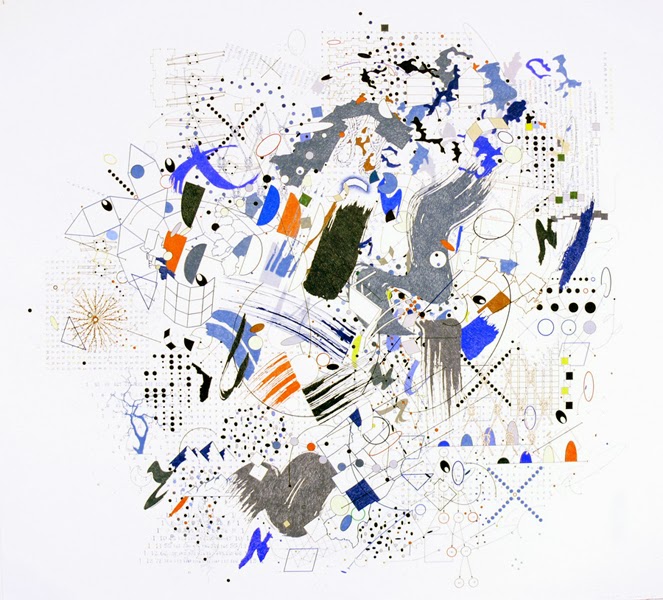 For the most part the images and equations and measurements go by so quickly that you cannot focus on any particular one of these for any length of time.  The point seems to be that Glabicki is inviting you not to focus on individual equations or images but to contemplate an underlying nature behind these symbols of science. He seems to be validating and rejecting these symbols at the same time. The symbols have worth, in a limited application, but the method is not applicable, say, to introspection or examination of our inner motives, emotions and thought processes. Glabicki’s work, to me, always invited a greater scrutiny of the process of science while also inviting a look at what science might not be capturing but which needs to be experienced and grasped through some deeper process on an individual basis.

The equations, symbols and measurements become, basically, dead but functional statements for the understanding and manipulation of the outer world. They are formulas as much as Nordic runes were.  Sir James Frazer, after all, pointed out that science was, basically, magical formulae that always ‘worked’ in the world and that magic and science both contained the same basic logical structure. These attempts to document events in the outer world become insufficient, however, to fully examine the inner world. 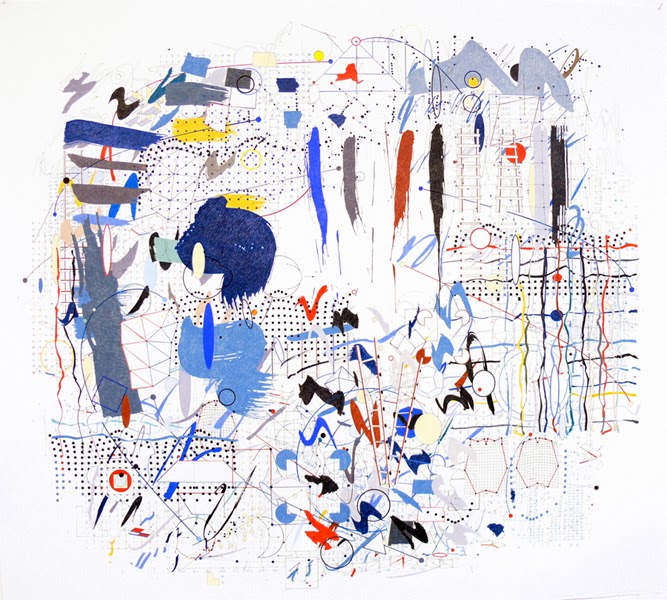 In the films of Glabicki, and, I believe, in his drawings, scientific formulae, geometric shapes, grids, patterns of dots etc. themselves become symbols of a type of cognition that can draw us farther away from meaningful introspection and leave us lost outside of ourselves.  He shows how semiotics can become a type of trap.  He seems to point out that all of our symbols derive from the outer world and are insufficient for us to perceive the inner world.  Ultimately, after a painstaking commitment to semiotics, we are invited to leave it for something better. The pattern we are left with in his drawings is almost like a work of process art in which Glablicki drips shapes and grids the way Pollock dripped paint.  Occasionally, in his new set of drawings, we will even see a dash of color obscuring a grid-like pattern of dots, or some shapes, as if the artist is overtly saying – ignore the grid, ignore measurement, look inside! 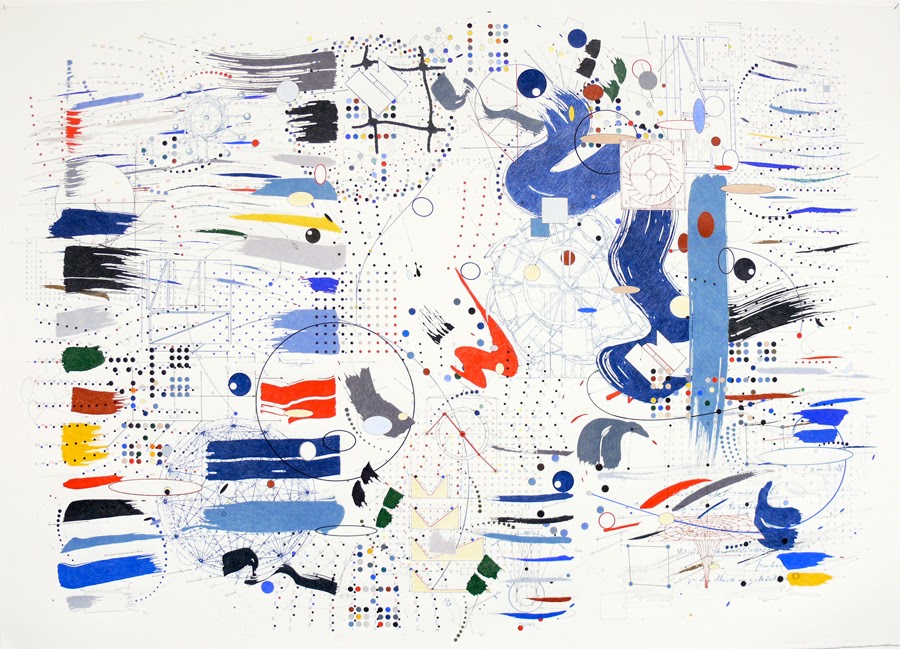 Of course, like in his films, it is simply impossible to focus on all of the detailed shapes, colors, angles, grids etc.  You have to take the whole image in the way you might take in a painting by Pollock. Pollock, of course, was more interested in expressing than representing, so we can also ask to what extent is  Glabicki attempting to represent something and to what extent is he expressing, instead.   An attempt to treat a Glabicki work as if it were purely representational and to really analyze particular aspects of the piece will, literally, lead you in circles in, for instance, Glabicki’s Relativity #1.

Again, Glabicki does not seem to be asking the viewer to read the individual symbols, he is inviting a comprehensive look at the nature of measurement and the recording of information, but - as it is experienced subjectively.  By using the concept of relativity, he seems to make this more apparent, because you know that you can and cannot ‘trust’ the images any more.  We are compelled to ask “Whose images are these?” more than “Are these images exact representations of reality?”  The grids are, in fact, now crooked, some shapes seem to go through a type of repetition in which they ultimately disappear.  We also have to ask: Just what kind of experience is being represented here by two differing sources?

In the drawings you see dual attempts to experience and represent the same ‘something’.  So the artist also questions whether there is an underlying reality behind these dual attempts to grasp something. We assume there is, but inherent in the concept of relativity there is a loss of objective reality or a loss of the concept of the ‘thing in itself.’  Indeed, Glabicki might be asking whether this question is even legitimate given the fact that regardless of the relativity of experience, we are compelled to engage in the process of sifting through and making sense of experience.  Perhaps these drawings point to the fact that the true reality is in having the same motive to experience and the same desire to represent as everyone – the subjective process becomes more important than the outcome and Glabicki reflects this inner need to experience, comprehend and transcend perfectly in his current pieces. 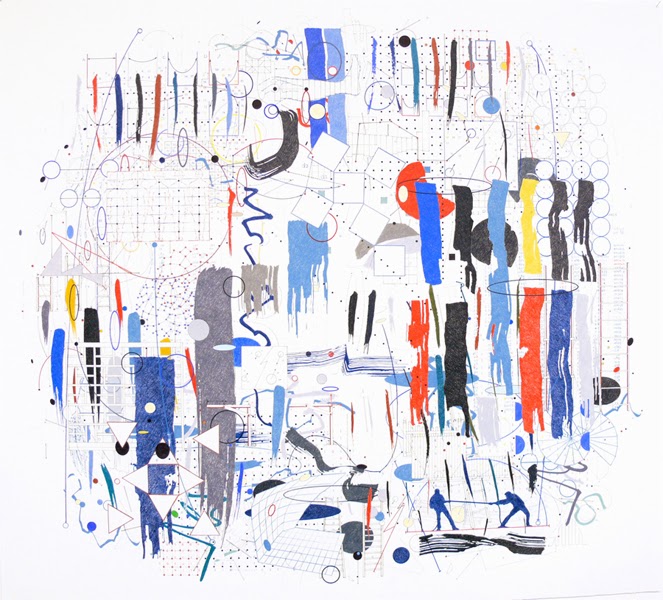 An experimental film by Glabicki: