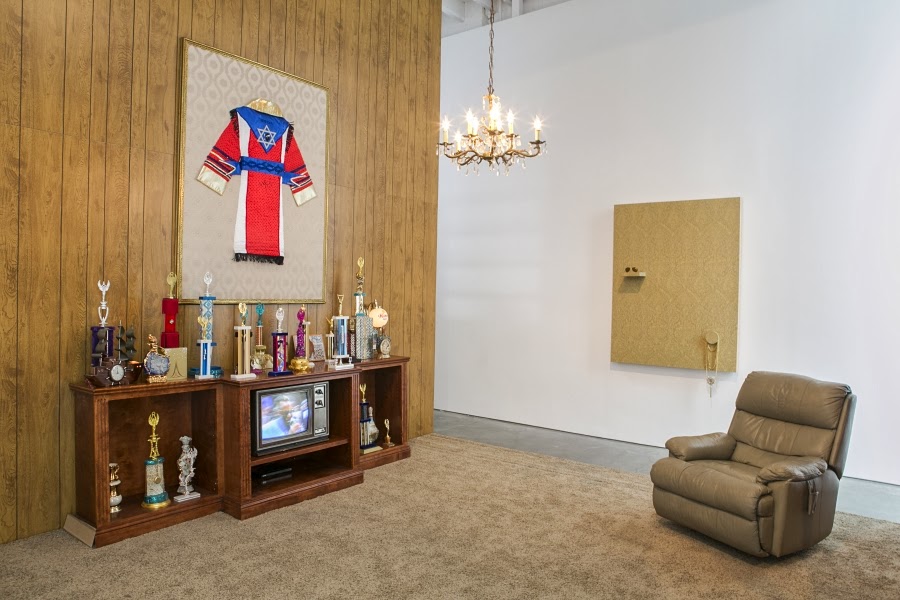 Walking among the elaborately decorated and sparkling pieces at the Paul Kasmin Gallery on 27th street, I suddenly heard the voice of sportscasting legend Howard Cosell – “What!? Roberto Duran has quit! Roberto Duran has quit!” Stepping around a partition I saw a replica of a working-class Chicago basement rec room (which made me feel a bit at home), resplendent with myriad trophies, an old TV showing the Duran/Leonard boxing rematch, a huge comfy rocking chair (based on an original bought, potentially, on Milwaukee Avenue – Chicago’s erstwhile mecca for comfy furniture for the chic proletarian) and sundry other artifacts. This was, in fact, a replica of the artist’s dad’s rec room in Chicago, where the artist spent many meaningful hours, as a boy, sharing his dad’s love for boxing. 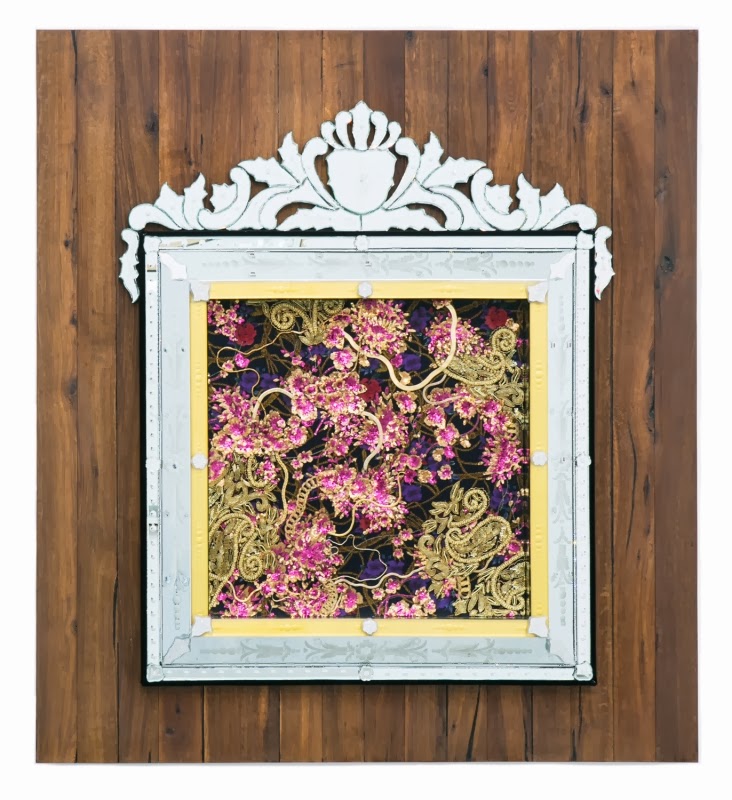 I wanted to sit down, open one of the cans of Budweiser lying next to the chair (I’m a Cubs' fan and a Bud man!) and relive the match that captivated, unified and horrified the working class of America, black, white and Latino. Yes, Duran had quit by muttering "No mas!" ("No more!") to the referee. Blue collar guys with their cans of Budweiser could be heard saying: “’No mas!’ What the hell does he mean ‘No mas!’ I had five bucks on this guy! ‘No mas!?’”

Before the era of production outsourcing, when blue-collar was king in cities that used to have big shoulders, this boxing match was supposed to be Achilles versus Hector, Alexander versus Darius, Grant vs. Lee, but it was, instead, as if the Spartans had wimped out at Thermopylae. It was a cause of perplexity and concern for every blue collar guy, and it seemed to herald a change in America when Duran just plain stopped fighting for inexplicable reasons – it heralded a change from carrying a big stick, to carrying a smart phone. The age of the reliable and hard-working factory guy was coming to an end – the old was dying and the yuppies were being born. When Duran said, “No mas!” he might as well have been saying, “No more working class in this city. Time to stop this, time to move on.” 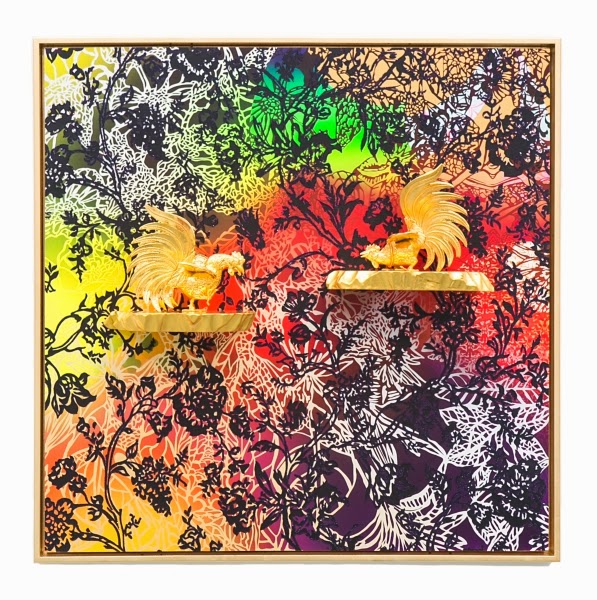 A lot of reviews have focused on Rolon’s Puerto Rican heritage, but as a white guy with working-class roots, who probably grew up close to (if not in) Rolon’s boyhood neighborhood, I tend to think of his work as more ‘working class opulence’ than ‘immigrant opulence’. His work points to the creation of archetypes from the experience of working class life that defy ethnicity, although I can see the Latino influence. He helps the viewer intuit the ethics of that time and place in that social class in a major American city which has changed drastically in just one generation. He captures the sensibility and the ethic – the code of conduct, the social and personal expectations – from that milieu. Basically he captures a golden age experience of the working-class immigrant in the American city. 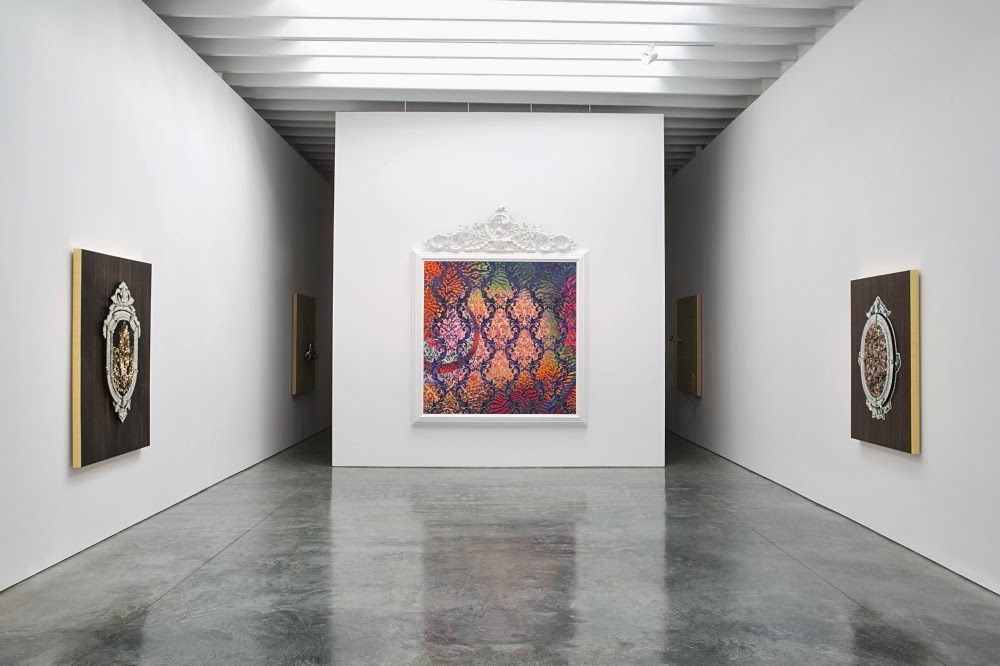 For instance, some reviewers have stated that Rolon’s designs in many of his pieces are ‘baroque.’ Well, actually, to me they are more like the fancy designs inner city mothers liked to see on their wall paper. The fancier the better. They were paying good money for that wall paper! Our fathers worked damn hard and wanted to see fancy wall paper too. It was a sign of working-class success, a sign that you were living comfortably and had stability in a neighborhood where you also had drunks and domestic abusers and trash of every race, color and creed. In working class neighborhoods you had the ‘good’ families and the ‘trashy’ families and the good families often had fancy wall paper. It had better be fancy! You don’t want your mom’s lady friends coming over and saying, “Why’d you buy such plain wall paper!”

My favorite piece of the show, outside of the rec room, is Cockfight or Club Gallistico. The backdrop shows an overlay of various floral patterns and dazzling bright colors. This could be inspired by our moms’ finest, baroque wall paper (perhaps purchased at Goldblatt’s Department Store), and we have two golden cocks readying for battle. One looks like kind of a runt, but in true working-class style, he is not going to back down an inch. If he loses, well, at least he fought back, and he’ll have the respect of his peers. This cockfight literally becomes the ‘golden’ rule of the lower-middle-class portion of the city. It is elevated to the status of pseudo-religious iconography. 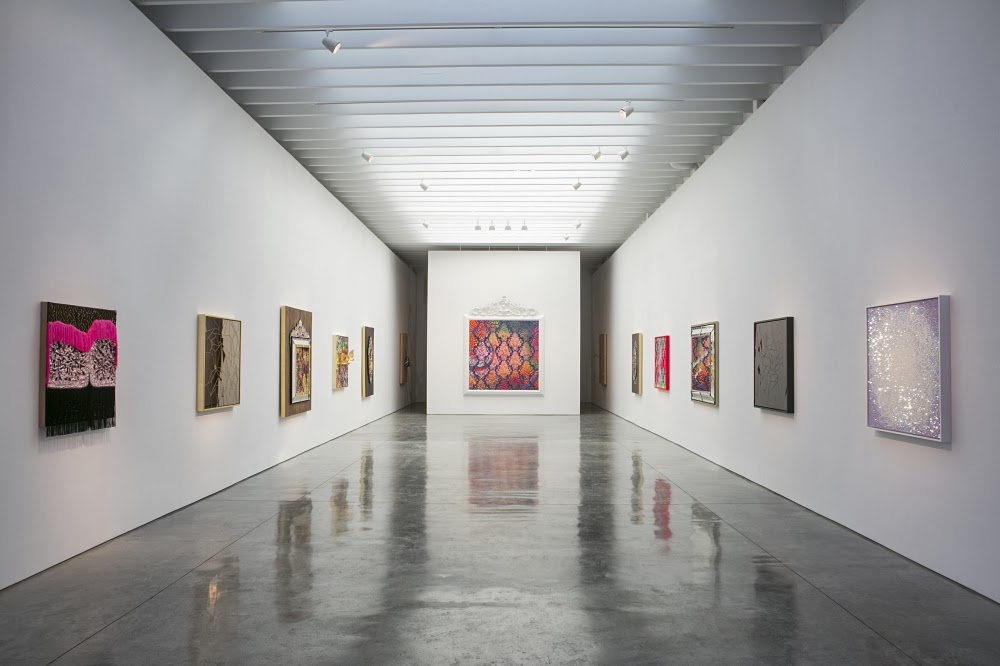 To me, Rolon’s work also highlights the change, the pacifying gentrification, that major American cities have gone through since his childhood. When I was growing up in Chicago, there was definitely a macho, ‘Are you looking at me?’ attitude throughout the Windy City. A working class ethic pervaded the city. This was the city of Mike Ditka more than it was the city of Georg Solti. In my neighborhood, which had to be like Rolon’s, you ‘made it’ when you landed a steady job at the Schwinn Bicycle factory or the Ludwig Drum Company.

Yet, going back to my old neighborhood I now see delicate white guys pushing baby strollers, carrying cups of Starbucks and holding Paul Auster novels. One summer I watched a Little League game at the park where I once played. My team (a mixture of white, black and Latino working class kids) had been sponsored by the Tasa Liquor Store, but now the teams didn’t even have sponsors! And the team was as white as a Wisconsin ski slope. A ball rolled right between the legs of one of the second basemen and I cringed. I once played second base with a broken nose and, even injured, if I had ever let a ball get by me, I would have been berated by my manager, my teammates and the parents who were watching. Now, the manager merely clapped his hands and said, “Nice try Scott!”

So Rolon’s work, to my eyes, shows the ethos of working class life exulted and idealized. I think Rolon is pointing back to a kind of golden age in American life. I think he is expressing a certain remorse that these times and sensibilities are lost forever. We were once a production center and guys could get warehouse and factory jobs and a type of ethic developed from this (the so-called ‘blue-collar work ethic’) Now what do we have to replace the blue-collar work ethic? The tech start-up guy work ethic? I don’t think Rolon is ironically or cynically mocking the artifacts of working class (Latino) life – I think he misses that whole scene. Our dads, our uncles, our older brothers were cool. They were tough. They were stoic and strong models. His art is almost an in-your-face taunt: “These are boxing gloves. You wear them and hit other guys with them. Why? Because it shows you have guts, that’s why.” More broadly Rolan might be asking, “America…will you still have your guts without guys like my father?”