Grace Noh has done a wonderful job of curating a show of enigmatic pieces by three women artists from Brooklyn for Gallery Ho on 27th street in Chelsea.

In Fay Ku’s piece “Are We Having Fun Yet?” we see 6 identically dressed young Asian women sitting in a roller coaster, arms upraised, but each with a deadpan expression of apathy, and/or perhaps stoicism, in lieu of the type of gleeful anticipation we might expect. Indeed, in both of Ku’s pieces for this show we feel we should be seeing one thing – some expression of pleasure from a recreational activity – but instead we see a type of grim determination, excessive concern or even outright anxiety. 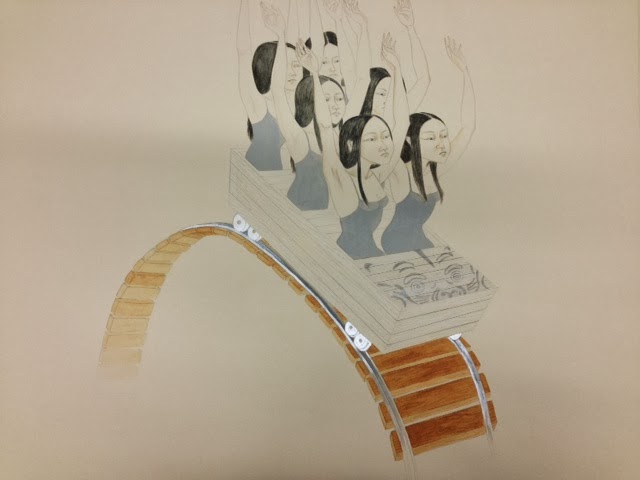 In the 1960s scientists did a (cruel) experiment with dogs, in which they placed individual dogs in metal cages, attached electrodes to the bottom of the cages and then turned on the electricity for a sustained period of time.  The dogs did everything they could to escape the jolts, but then, in each case, there came a point where each dog literally gave up and lay helplessly on the bottom of the cage merely absorbing the jolts.  This response came to be called 'learned helplessness' and is the response that is felt, and the attitude that is shown, when one feels one no longer has control of a situation, or can no longer change something that is wrong. (Many people do not bother voting in elections, for instance, because they feel a type of learned helplessness: “Even if I vote, nothing will change!”).  As well as Buster Keaton, these ladies seem to be channeling or expressing a type of learned helplessness, but in situations that should be naturally eliciting joyful participation.

Another possible interpretation of “Are we having fun yet?” could be that the piece is about the extent to which competition pervades and steals from our lives.  Each of these young women feels she has to be identical – same clothing, same body type, same expression - and each is engaging in the same activity, but happiness seems to be lost in this need to conform and compete.  They have reached their goal of being beyond reproach to their peers (through conformity) and cannot let their guard down to even enjoy themselves. 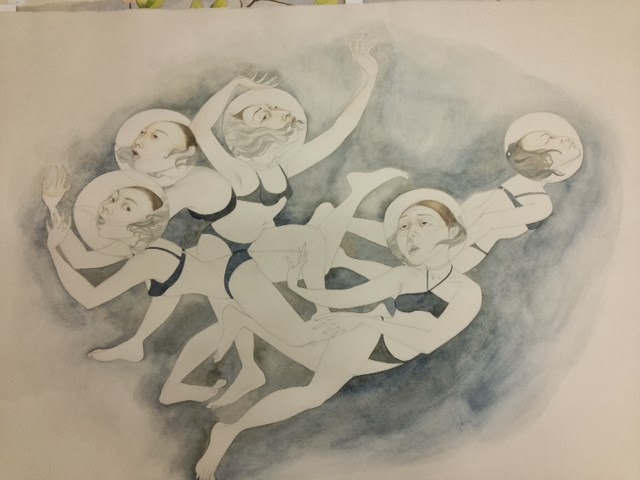 In “Water Bubbles” we see 5 young Asian women of similar appearance, identically dressed, swimming underwater with circular water bubbles formed around their heads.  My friend Yunhee felt that this piece looked a bit like Matisse’s Dance of Life, but, as she put it, “… with people under extreme pressure.”  One young woman seems to be swimming away in fierce earnestness while another looks toward the viewer to, perhaps, gauge whether what she is doing is acceptable.  Another seems distracted and preoccupied while two seem to be feeling some type of distress. There are obviously disconcerting external pressures that are not present in these two scenes of recreational activities, but which rob the recreational activities of any possible joy.

In Hiba Schahbaz’ “My Selves” she experiments nicely with multiple images of herself to invite a reflection on the contrast between the transient and the permanent in our lives and to what extent anything can even be considered permanent.


In this triptych we see a flow of fish from the right side of the three pieces to the left, implying the passage of time and movement, along with what appears to be some type of mythical bird that is sailing through the air in each piece.  In the three separate settings of this triptych we also see numerous images of Schahbaz, almost as if she is the subject of an old Muybridge series of photos – she is only painted in profile, frozen, apparently, in the process of moving from left to right or right to left.  However, unlike Muybridge photos each image is possibly divorced from the other images through a significant passage of time (but not so significant that there would be a radical change to her appearance).  These seem to be images of Schahbaz passing through a setting, repeatedly, through a brief period of time.


Schahbaz is primarily nude but is also seen in various stages of being dressed. Her skin tone also differs in different images.  The multiple images in different stages of dress with the differing skin tones seem to reflect the type of transience and permanence of our very beings. This is also reflected in the settings through which Schahbaz walks.  An important aspect of nature is, of course, the fact that it exhibits traits of transience and permanence at the same time.  The trees will be there in that park long after we are all dead, but they change with the seasons.  We also see that Schahbaz seems to deliberately create images that refer to the ancient belief that all physical change is an illusion and that underlying everything are merely the four elements of earth, air, fire and water.  All of these elemental forms are clearly represented. 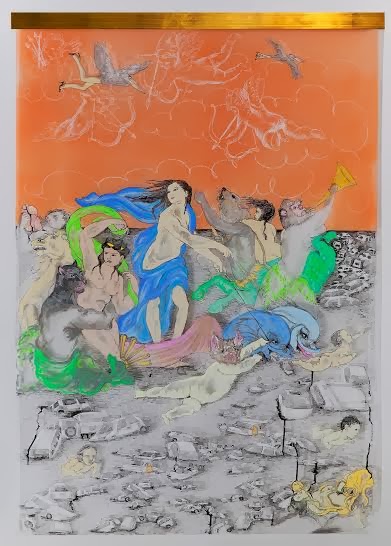 In Manju Shandler’s “Tsunami 1” we see a wry revisiting of one of the most heralded works of Renaissance art – Raphael’s The Triumph of Galatea.  According to the story by Ovid, Galatea was a Nereid (sea nymph) who was married to the cyclops Polyphemos.  ‘Twas, alas, a loveless marriage that led to an affair between Galatea and Acis.  When Polyphemos learned of the situation, he trailed the lovers to their rendezvous and crushed Acis with a pillar. To redeem the situation as well as a sea nymph could, she turned the blood of crushed body of Acis into an eternal river.  Yes, I read the story twice to make sure I got it right.  Another allegorical death and resurrection story my friend – mythology is full of them.


Apparently Raphael wanted to use this fresco as an opportunity to depict what he felt would be physical ‘perfection’ in a woman.  He, apparently, referred back to his own imagination (fantasy life?) to depict a flawlessly beautiful woman triumphantly being lead to her apotheosis.


Galatea does not even look around at any of this – her sights are set higher as she travels through the muck and mire of an icy sludge filled with abandoned cars and other destroyed appliances reminiscent of the images we all saw after the horrible 2011 tsunami that hit Japan.


In the notes to the show it is stated that the inclusion of masterworks in Shandler’s pieces is meant to highlight the fact that we are compelled to interpret the present through “constructed ideas of the past.”  I like this statement a great deal.  How do we comprehend or absorb gratuitous and brutal acts of “god” or nature or other people?  How should we respond? How can we respond so that we can continue to whittle away at evil in the world and replace it with greater and greater humanity?  Have we ever been adequately prepared for the adversities or horrors of the world through the masterworks of the great (male) artists?


Art critics and professors act as if the great masters handed us an amazing legacy, but, maybe, just maybe, Raphael was kind of a sexist, horny guy (funded in part by a belligerent and corrupt Pope?) who liked painting women who rode on sea shells pulled by dolphins.  This stuff gets taught to children? How the hell does this help me come to grips with thousands of innocent people killed in one week, out of the blue, in an economically developed society that had taken every precaution to protect its citizens?  When I look at Shandler’s paintings (and I’m not sure whether she is saying this or not – this is just what I came away with) I think, “Yeah, there’s a lot of useless crap in our great art museums.”


All in all Grace Noh did an amazing job by bringing these three artists together.  Not one of the pieces in this show is an ‘easy’ piece.  They all require you to step back and put on your thinking cap awhile – and that’s the great thing about wondering into some of the Chelsea galleries.  This is the type of show that I really love – it presents challenging, engaging, well-conceived and even humorous art work. 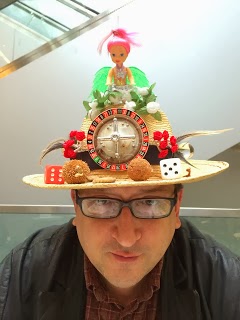