The Harmfully Active and The Helplessly Receptive: Paperweight by Lin Yan at Gallery Fou (review co-written by Jackie Zhu) 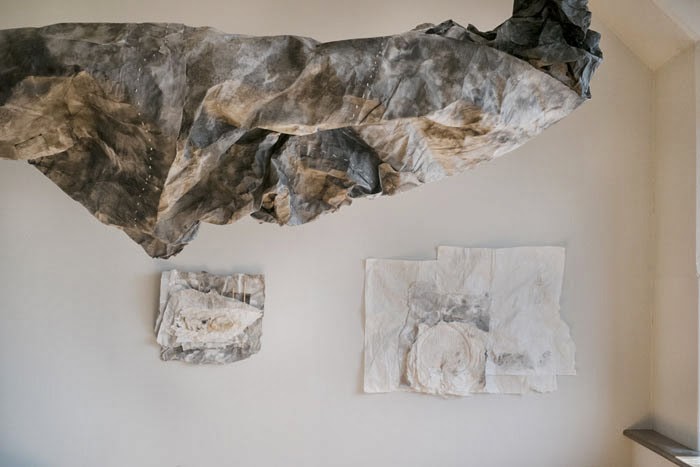 {{{click on images to enlarge}}}
“Fou” is the Chinese term for “denial.”  In their press literature Echo He and Jessie Yang mention that they created Gallery Fou, and chose the name of the gallery, as a ‘denial’ of the mainstream gallery format or formula.  Both are NYU Arts Administration grads who have taken a Brooklyn apartment and converted part of it to a gallery space where they have been exhibiting small but meaningful and engaging one-person shows since last year. Last weekend we (Dan Gauss and Jackie Zhu) attended a tea party at the gallery, where we met the artist and various supporters of this venture.
So what is the greater meaning behind using an apartment as a gallery?  It’s like a Quaker approach – you don’t need a church to experience God.  You don’t need a traditional space or to be in Chelsea or Williamsburg to experience great art.  Furthermore, the folks who curate the shows are not forced to focus on attractive, glitzy or ‘saleable’ work, obviously.  There is no real pressure to attempt to sell pieces and the work can be as experimental as possible. 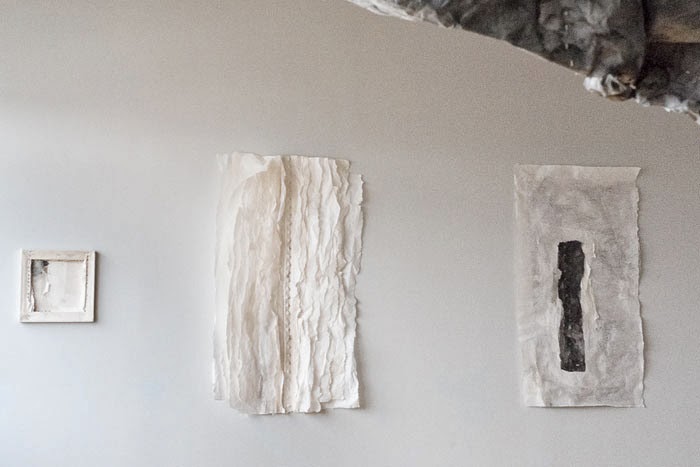 There is, consequently, a real shift away from the gallery geared to the art buyer toward the gallery for the art creator and lover. It’s like having a non-profit gallery without the hassle of grant proposals.  Going to a ‘home’ instead of a gallery is also a completely different feeling and creates a greater sense of community and familiarity among those who experience the art. At a traditional gallery I don’t shake people’s hands and introduce myself – at Fou we all got to know each other, sometimes pretty well.  Obviously folks who create this type of gallery need to really know the art community, to be discerning about art and they need to create amazing shows to draw people.  Creating such a non-traditional gallery probably requires more effort and discernment than running an ‘established ’ gallery and it probably requires greater people skills as well in that you don’t just have folks drifting in and out of your gallery space – you become a host and not an owner.  Gallery Fou has been meeting these challenges nicely and putting up some excellent work.
In the show we recently saw (Paperweight), Lin Yan created many pieces made of Xuan paper. This is a type of paper made from the paper mulberry plant (a tall plant used for a number of purposes in Asia) and stretching back to about 100AD. This paper is softer and more translucent compared to other types of paper. It is made from the mixture of tree bark, grass stems and other natural plant fibers, so the paper surface retains traces of these materials, and thus gives an organic character to the finished product. 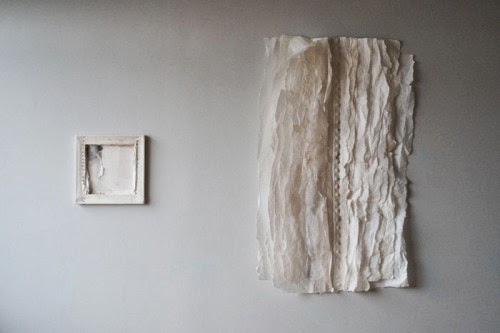 According to traditional Chinese philosophy the world is the result of the energy of Yin (negative) and Yang (positive).  Thus Chinese painting on paper often is only done in black to deliver this idea in the most simple and pure way. You see white space and black strokes. Sometimes the strokes are clearly delineated and sometimes they are blurred into the paper, showing interactions of the Yin energy and Yang energy as meaningful aspects of the art. Painting on this type of paper, therefore, has a process art aspect – you are not just representing something but expressing inner states as well through the manner in which the strokes are made.
Yan, however, uses this type of paper and ink in an even more unique way.  As mentioned before, black ink often represents something active while the paper represents something receptive.  But in her pieces the ‘positive’ energy does not interact harmoniously with the paper – it vitiates or pollutes the paper. As Yan explained at the gallery, the Xuan paper is the result of an achievement during the time when China was an agricultural country. The paper – to a great extent – represents the natural environment.  The ink, which clouds and darkens and stains the paper, seems to represent the current industrial phase of China’s history.  “Yin” is, effectively, the long history of the civilization of China existing within the natural realm while “Yang” becomes the recent history of modernization, industrialization and massive pollution of the air and rivers.  We do not see a harmony of black and white but a transgression of black ink on and into white paper.  The paper is not being used, it is being damaged. This is most clearly seen in an installation piece which looks like a dark grey cloud hanging from a pipe toward the ceiling of the apartment.   Yan has made a large rolling mass of paper which has been deeply tainted by black ink. 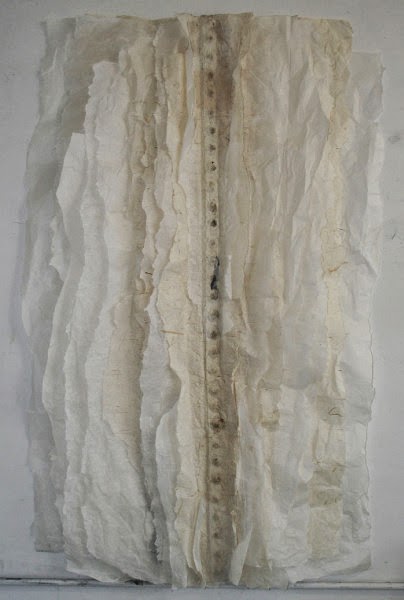 Yan adds another dimension to her art by layering pieces of the paper in black, grey and white. Indeed, there is one piece where you see the outward impressions of steel rivets down the middle of one piece while you see layers of paper on each side as if they are waves created by the construction process.
“Breath” actually looks like the inner structure of a lung. It has absorbed or filtered more than its capacity, like an air conditioner’s filter after a long summer of scorching days in a crowded city.  The blackness represents the harsh chemical interaction between industry and the human organism.  A little white space on the left corner and a white spot on the right reminds us how the lung should be before being subjected to the aftereffects of industrial production. The title “Breath” suggests a sense of the passive or helpless. The lungs are forced to breathe even under horrible circumstances because life depends on breathing. We just keep our fingers crossed hoping that although severely and noticeably impacted, some effective functioning of the respiratory system can still occur – so that we can continue producing and consuming industrial products. 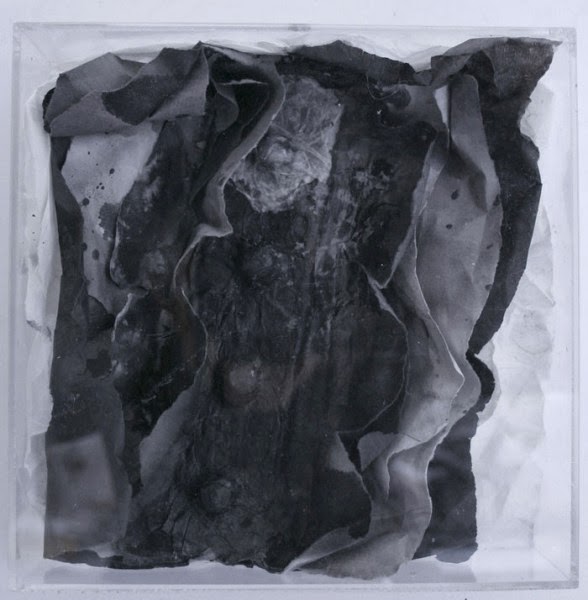 On the other hand, “Breeze” seems a more relaxed piece.  Surrounded by open white space, an engraved fan is in the middle. It is reminiscent of a summer afternoon in the far past, sitting in the backyard breathing in the soft and cool wind. However the fan relief is glued within a painted grey paper, as if the fan merely represents the memory of better times and is now an unreachable dream. Taken together, “Breath” and “Breeze” also form the Yin and Yang contrast – although in the Yin/Yang symbol we are supposed to have a unity of active and receptive, not a contrast of the harmfully active and the helplessly receptive. 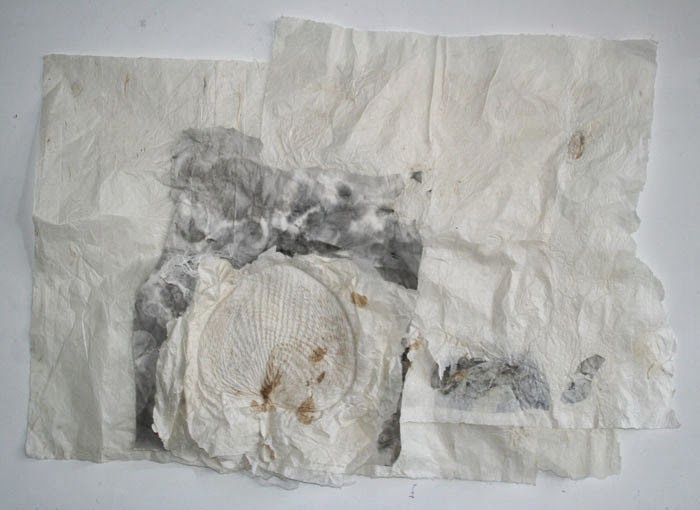