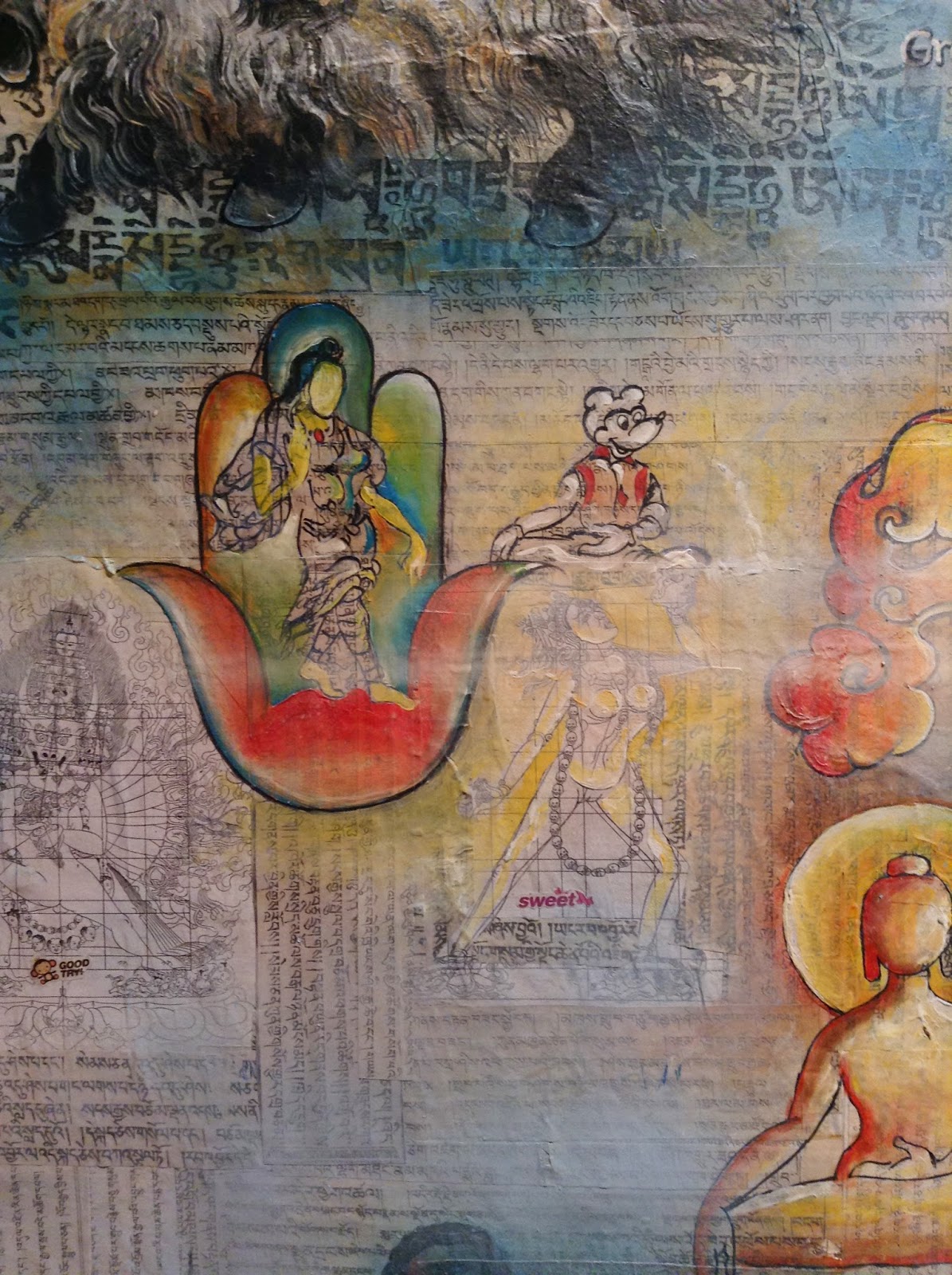 The goal of Tashi Norbu, as an artist, mirrors the goal many Tibetans have, especially those who live in exile or those living as a kind of ‘occupied’ people in China.  How do you preserve the meaning and beauty of Tibetan culture, not only in occupied territory, but in a ‘globalized’ economy where cheap and tacky American pop culture is often equated to freedom and progress?

Well, how about painting meditating Mickey Mouses?  Or showing a Superman figure gazing at a mandala?  According to Norbu the Superman represents science’s attempts to understand reality, but I would offer that it represents science’s failed attempts to glean the real truths of the inner world that Tibetan Buddhism tries to reach.  The MRI devices that are mapping out the brain look so impressive and cost so much money, but the neuroscientists often just produce roadmaps of the trivial (“This is where you process music in the brain!”), instead of closing their eyes and diving deep into experience and memory to find out what photos of neurons can’t tell us. Tibetan Buddhism creates more detailed inner maps and helps predict which humane changes really might be possible inside of us. 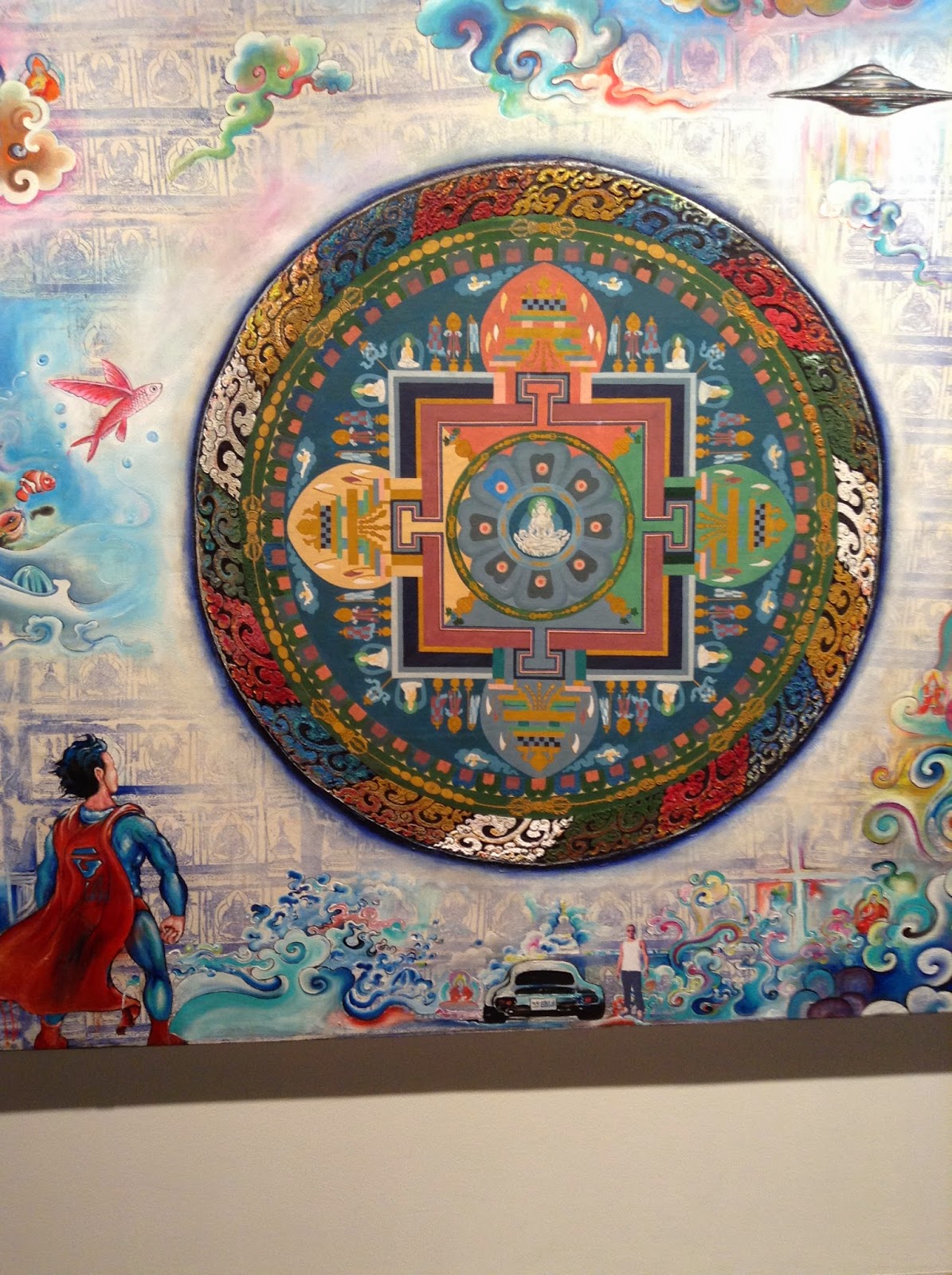 This is part of the experiment Norbu engages in at Tibet House – to merge contemporary art trends with the traditional Tibetan “Tangka” techniques he learned as a student. And, basically, Tibetan Buddhists are so open-minded, they relish this type of experimentation.

The central or predominating image of the show is an image of a couple copulating – the man sits cross-legged and the woman straddles him on his lap.  Norbu explained that this image can represent the parents of all Buddhas.  Norbu explained that he wanted to create a type of triptych showing a Buddhist interpretation of the evolution of the universe.  He told me that the Jewish and Christian religions begin with a creation story but such a story does not seem to exist in Buddhism. So he visually represents this in his painting.  The implication of the triptych is that the spiritual development for creation itself implied in Buddhism was one of the creative factors of the universe.  What made me laugh was that right under the image of the copulating parents of all Buddhas, we see two fish from “Saving Nemo” looking at each other in a flirtatious/lecherous manner.  Was this a wry allusion to sacred and profane love? Was this another form of scared love? I guess profound ideas do not have to be conveyed through pretentious symbols. 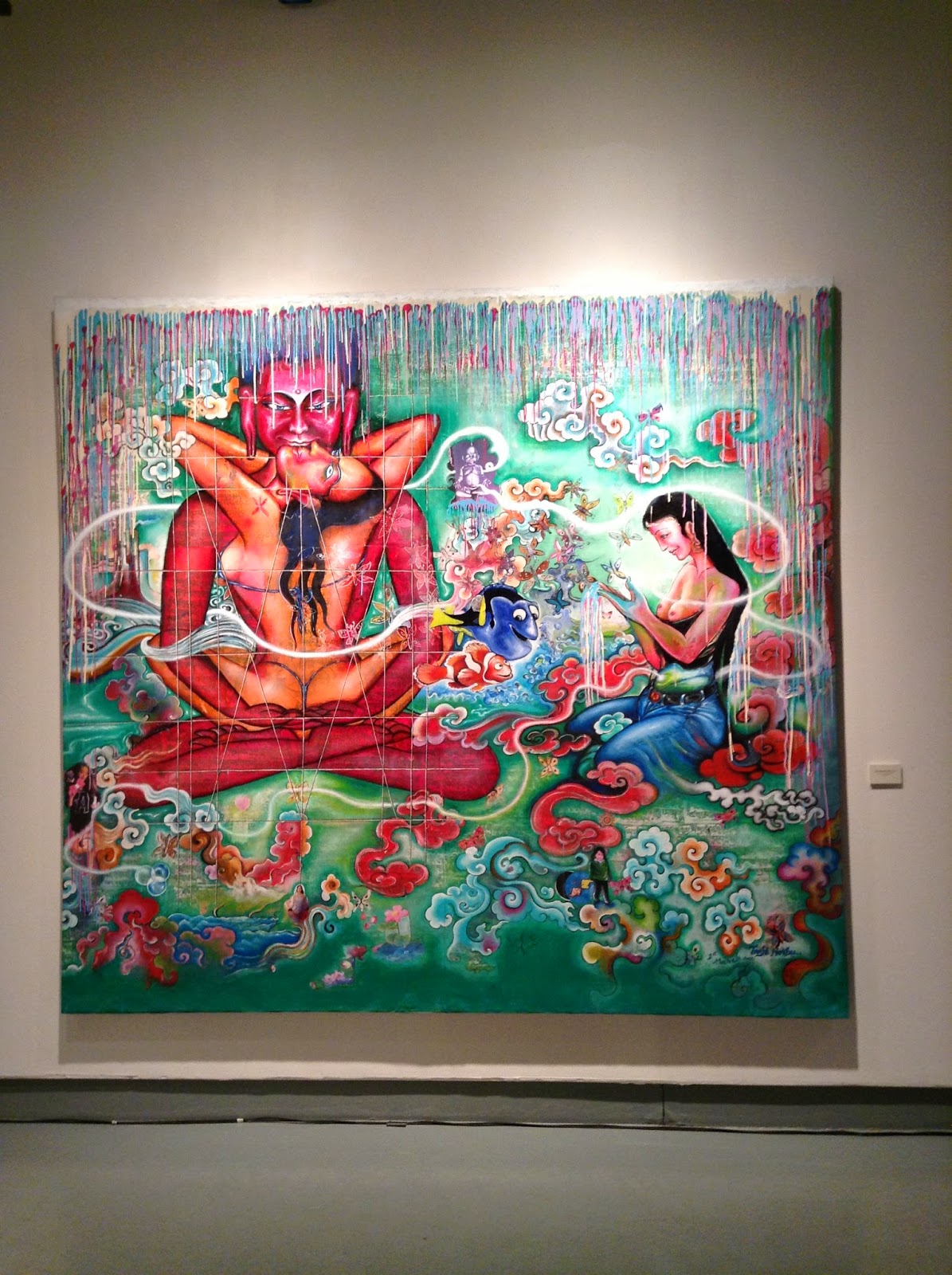 Indeed, the artist scatters quite humorous symbols throughout his paintings, sometimes even as ‘inside jokes.’  For instance, when I asked him why he had so many images of cans of Heineken beer in his work, he merely informed me that he lives in Holland, is happy to be there and Heineken is a Dutch company.  I thought the beer might have meant spiritual elevation – when you drink beer you become more open-minded, tolerant, sociable…unlike the blood of the vine it’s the blood of the brew…but it’s really there because it’s Dutch (apparently).

The copulating couple – as well as representing a birth to a universe that does not just provide the second law of thermodynamics, but also a sense of compassion and a critical capacity to assess the workings of nature, represents the traditional union between male and female, active and passive.  Throughout older religious and allegorical literature – from The Odyssey to the Ramayana to Faust etc. - you often have a wandering, aggressive, searching, problem-solving male who, ultimately, fixes everything and returns home to join his female companion.  There is an ‘active’ searching principle that has to unite with a ‘passive’ and stable principle for spiritual union to take place.  This is even seen in the yin/yang symbol. 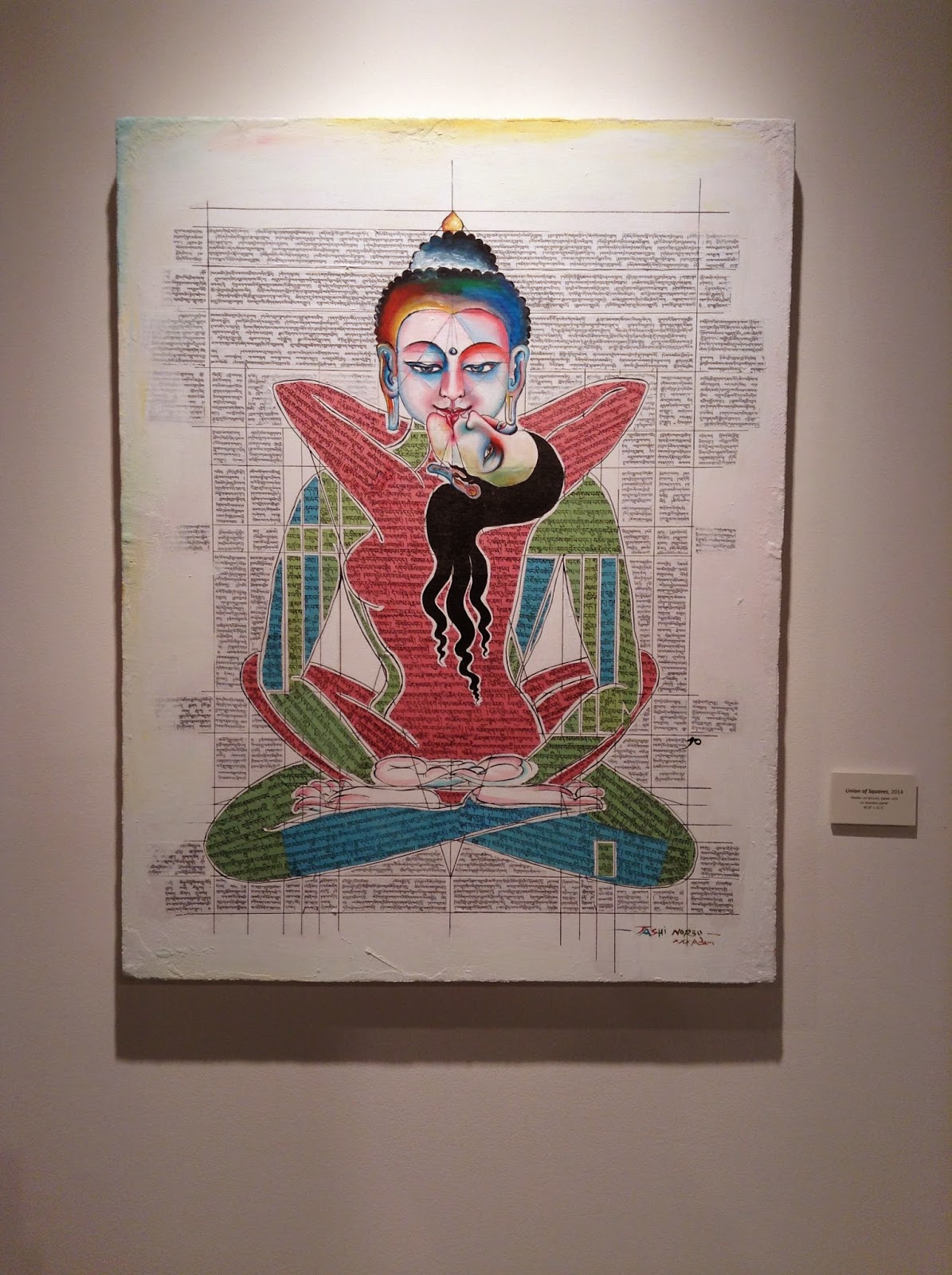 That this image of the couple pervades the 3 history of the universe paintings seems to imply that in the very design of the universe compassion and spiritual fulfillment were important components to counter-balance and overcome the more problematic and violent emotions and motives.

You know, you can’t get Heineken unless you corrupt the barley through the malting and fermentation process (before adding the hops) – so maybe the Buddhist universe is a lot like Heineken.

To those who might be a bit perplexed or even offended by a sexual image representing a religious concept, this seemed to happen a lot in pre-industrial religious imagery.  One interpretation could even be that the spiritual is literally born from the sexual (after you are born spiritual pursuits give your life a meaning) and that the spiritual, in turn, can give meaning to the sexual and the reproductive process (it becomes the justification for continuing life).

The central image is often painted more abstractly and is often painted directly over scared texts of Tibetan Buddhism.  In one painting it looks as if this couple is literally sitting on a Rubik’s Cube which is dissolving under them.  Ah, the problem-solving skills used to resolve the cube are of no use to the act of attaining a higher-spiritual being. 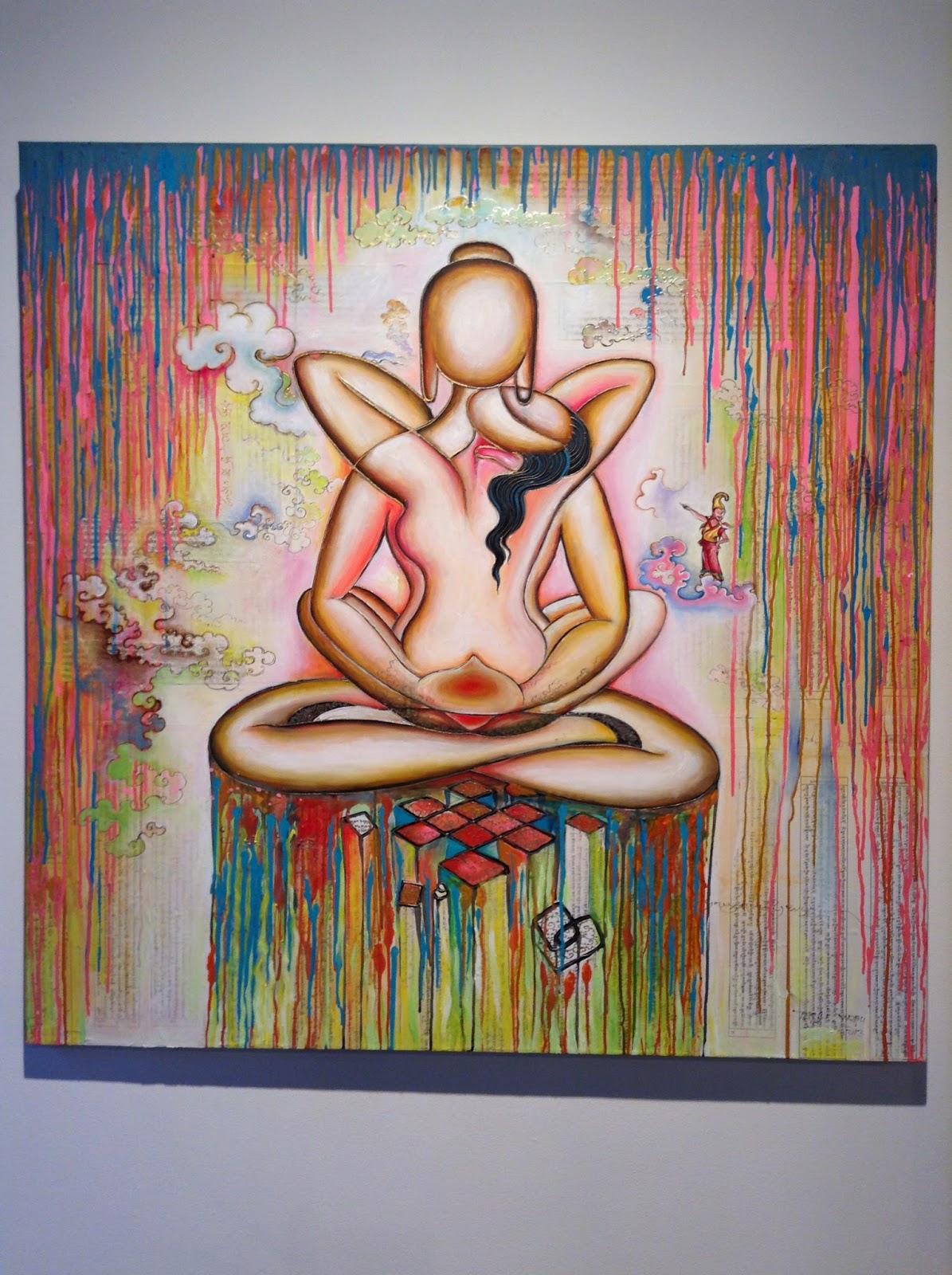 In the final piece of the history-of-the-universe triptych, we literally see a robotic Buddha, implying in a humorous way that the goals of Buddhism will survive in the world under any circumstances and far into the future. Again, the open-minded attitude I found at Tibet House was amazing.  As a baptized Christian let me say: try painting a robotic Jesus hanging on a cross and see what happens! The toleration and humor, even toward their own religion, by the folks at Tibet House, was so refreshing to me. 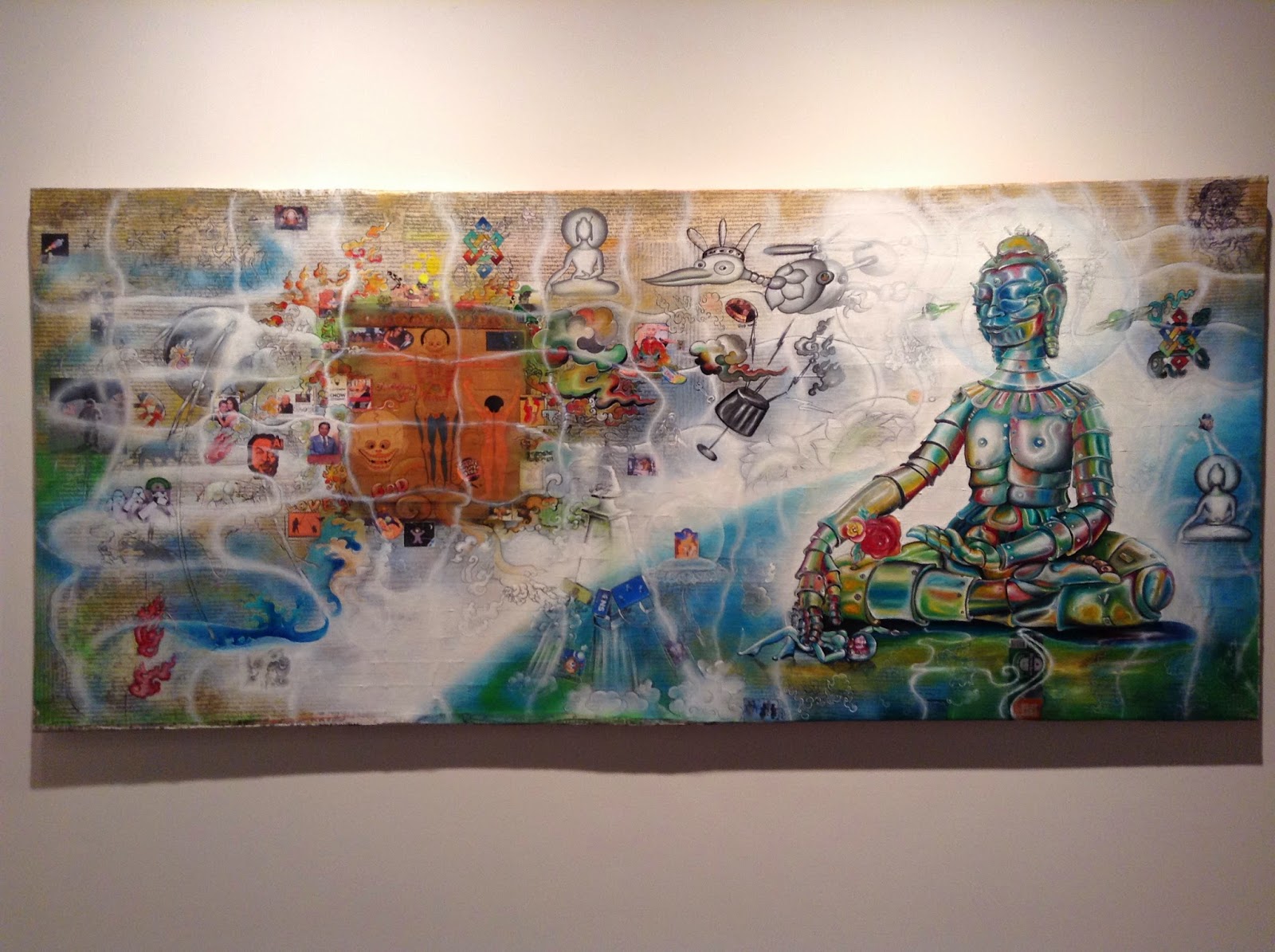 Norbu does a great job of showing that Tangka can easily embrace modern and humorous forms while still presenting the basic message of the religious beliefs this technique serves. If you haven’t been to Tibet House, please drop by.  Right now they have a wonderful mixture of classical works of Tibetan Buddhist art and Norbu’s very clever, funny and thought-provoking show.  The folks at Tibet House are very warm and welcoming and they have free gallery openings quite often.