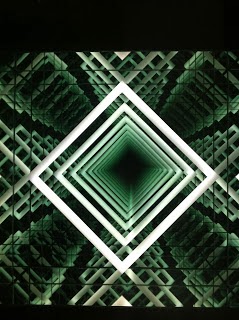 Paul Kolker has one of the coolest gallery spaces in all of Chelsea.  It’s literally an underground space that one gets to by descending  a zigzag staircase.  In a review of his work I did last year, I described the space as a type of “art bunker,” but the space has benefits and detriments – the average gallery hopper might overlook it because of its unique location, and, during Superstorm Sandy, this gallery was literally inundated and much art work was ruined. 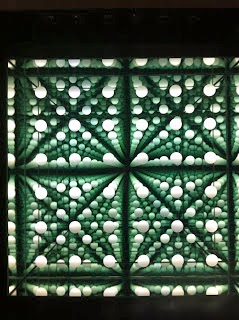 If you’ve been to Kolker’s place, you’ve probably seen what I call his ‘infinity boxes’.  Starting in the 1980s Kolker began making light sculptures using one way mirrors and LED message screens.  These are thin boxes that you look into and through which you see infinitely regressive patterns.  Kolker is a kind of electric Malevich.  He uses simple geometric patterns with his mirrors to create concrete images of infinity.  You might have been in the big Kusama infinity rooms – I think Kolker’s smaller boxes are even better. The endless repetition of the basic image creates a three dimensional structure that perpetuates itself endlessly until the repetition is lost to our vision. Infinity then becomes something lacking light and structure. Sometimes the boxes are lying flat so you have to look down and his work then gives you a sense of beauty and a type of vertigo at the same time.

Currently Kolker is drawing upon his medical background to draw attention to the recent developments in President Obama’s controversial Affordable Care Act.  As well as being a visual artist, Kolker is also a cardiac surgeon, lawyer and ex-president of an insurance company. 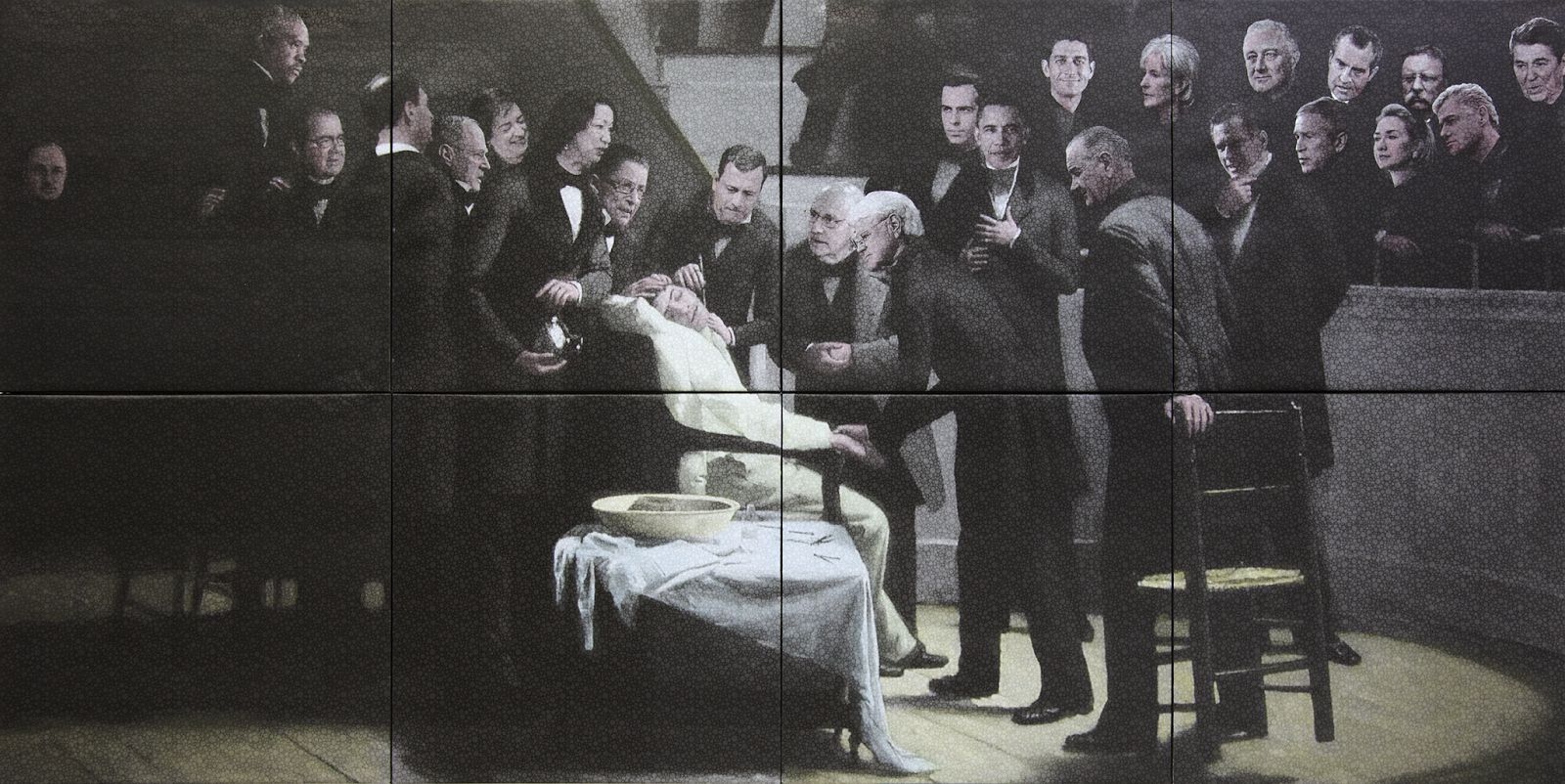 The centerpiece of the show could be called a type of allegory of the history of the affordable care concept in the USA.  Kolker begins with a painting which he saw often at the Boston Medical Library while doing work at Harvard Medical School: “First Operation Under Ether” by Robert Hinkley, painted from 1882 - 1894 (no, I’m not sure why it took him so long).   It’s an obscure work in the history of American painting, but thousands of aspiring doctors have seen it and it’s a fitting painting to use as a template for what Kolker does.  Basically Hinkley was attacked by critics who pointed out that the painting was done in a realistic style but that many characters in the painting were not in attendance at the actual first operation using ether as an anathesia.  Hinkley, however, parried that he did not want to capture a precise moment, but, instead, he wanted to document the various people who had contributed to this ground-breaking moment in medical science.  He had literally cut faces out of newspapers and books to paint them onto bodies in this work.


So inspired by the methodology of Hinkley, Kolker replaces the faces of the original characters in the “Ether” painting with the various historical and political characters who were participants in the struggle to finally get some type of system up and running that would help to cover as many Americans as possible with affordable health insurance.  You see figures ranging from Teddy Roosevelt to Obama, himself, in the painting.  In fact, I think Obama should buy this piece and use it to explain to others just how difficult it was to finally get something like this off the drawing board and into practice. Obama had to, as it were, stand on the shoulders of giants to finally get this thing going. 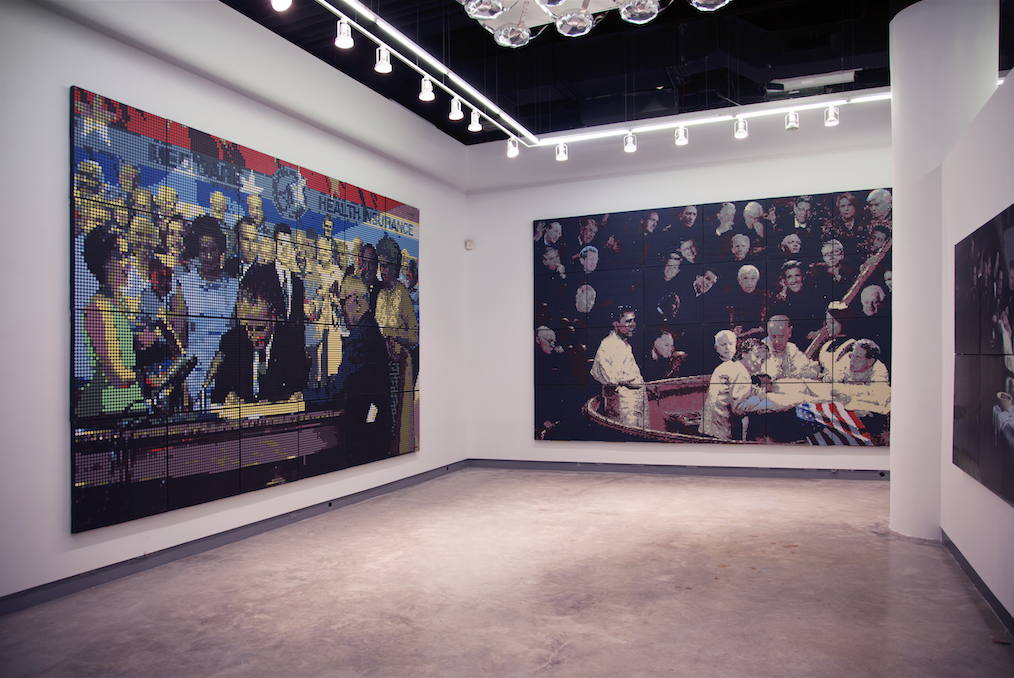 You might ask, for instance, “Why is TR in the painting?” Well, that’s how long politicians have been mulling over this idea.  From what Paul Kolker explained to me, Canada established what was called ‘socialized’ medicine around the time that TR was president (in the early part of the last century).  Roosevelt loved the idea, but had to find a way to reframe the concept outside of the concept of ‘socialism’ which was a no-no back then (even more so than now).  He was never able to do this, and the idea languished through the generations.  The next big step forward, however, was in the Lyndon Johnson administration, when Medicare was established in 1965.  Indeed, LBJ looms large in a couple of the works at this show.  Despite his horrific mistakes (the escalation of the Vietnam War) Kolker memorializes him as a politician who could bring both sides of the aisle together and get meaningful social programs up and running. 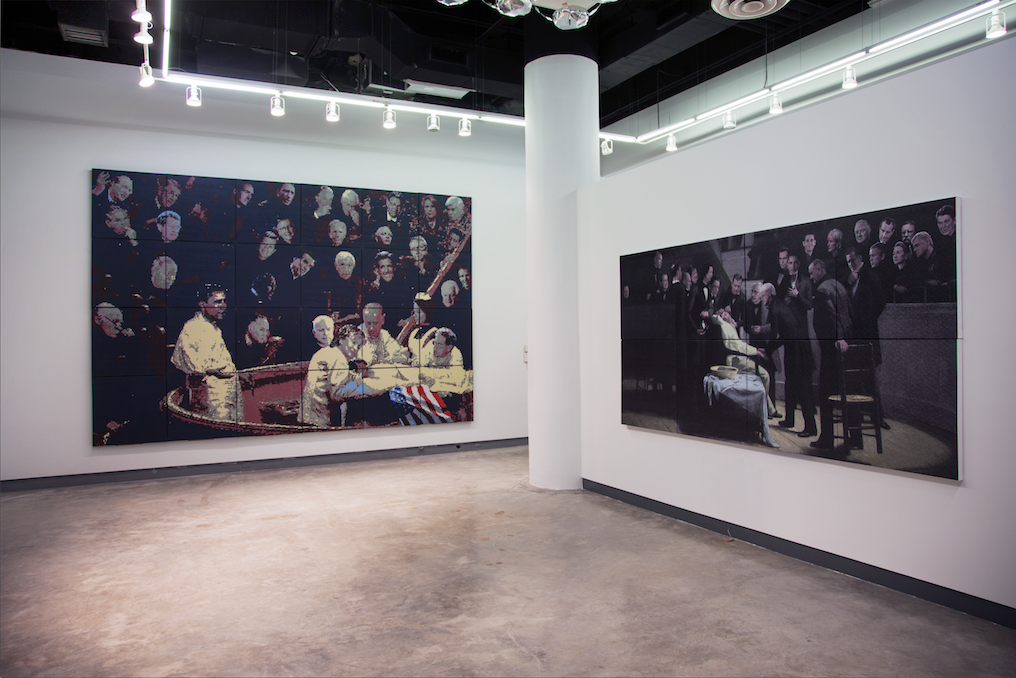 I liked how Kolker took this obscure painting and transformed it into a serious reflection on the factors involved in making a significant social change.  I also like the various facts and stories he presents about the ACA.  For instance, he points out that the “Individual Mandate” (the law that each person must obtain coverage) was initially a Republican idea.  Yet, for some reason, suddenly the Republicans used the concept of the “Individual Mandate” to try to stop the ACA in the Supreme Court.   Indeed, doing a bit of research I discovered that the Heritage Foundation (a conservative think-tank) first proposed the individual mandate idea in 1989.

Kolker is a strong proponent of the ACA and believes that with time all the kinks will be worked out and society, as a whole, will benefit.  If everyone is covered with something, even Medicaid, hospitals will, for instance, no longer feel compelled to pad bills for previous non-payments.  Yet, Kolker also points out that about 3 million people in NY City, out of about 8 million people, possess Medicaid.  This seems to point to the issue of the widening income gap in the USA and the inability of the business sector and government to collaborate on effective anti-poverty programs. The huge number of people using Medicaid seems to indicate that the ACA alone, will not be effective. Coming away from this show which was meant to challenge us to think about health care issues, it seemed to me that the ACA needs to be a part of a coherent program meant to ensure that more Americans can gain the financial means to live more meaningful lives.


So let’s say that Kolker’s homage to the history of affordable and universal healthcare is an unfinished masterpiece.   Indeed, there seems to be space left in the primary painting for emerging figures.  Hopefully he’ll be able to paint them into the picture sooner rather than later.