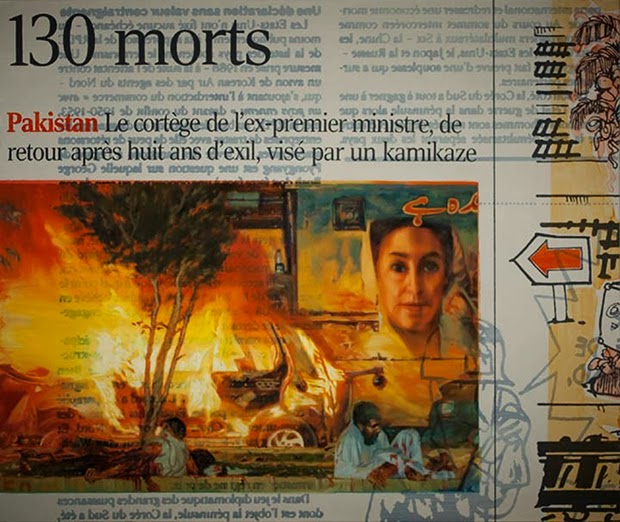 In his “Both Sides Now” series, Xie Xiaoze paints newspaper front pages in which you can see the ink from the reverse side of the page literally seeping through into the images and text of the page facing you.  This is a type of super-realism and language-art combination where the readable text is simply meant to elucidate the central, lurid, image, while the seeping ink serves a more symbolic purpose.  The seeping ink could be serving as a type of graffiti, that not just calls into question the quality of the paper stock, but also impugns the purposes and content of the text presented.   There is a divorce between any act or event itself and the articulation or representation of the act, and this divorce and the consequences of this divorce can be represented by the ink seeping through the page. 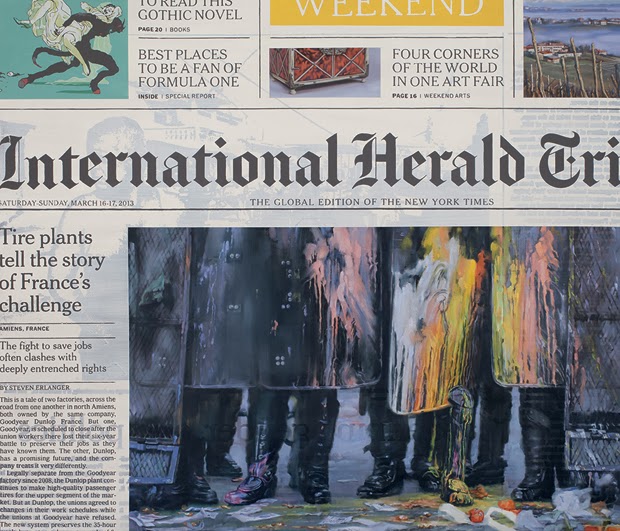 The reverse text which has bled through the paper definitely becomes a type of abstraction of language representing a characteristic of language.  Another interpretation could be that the text which has bled through, as an abstraction of language, can represent our subjective responses to the types of narratives and factual information presented in newspapers or other factual sources.   In the process of reading about events, especially terrible events, there is a conjunction of the outer and inner worlds.  The story itself is absorbed as factual information, categorized somehow but it also elicits responses, judgments, motivations, fears, and/or various other possible emotions.  The ink which has bled through the paper represents, perhaps, our inner dialogue and the inner change we go through when we are engaged by text or by any type of narrative (instead of a direct experience). 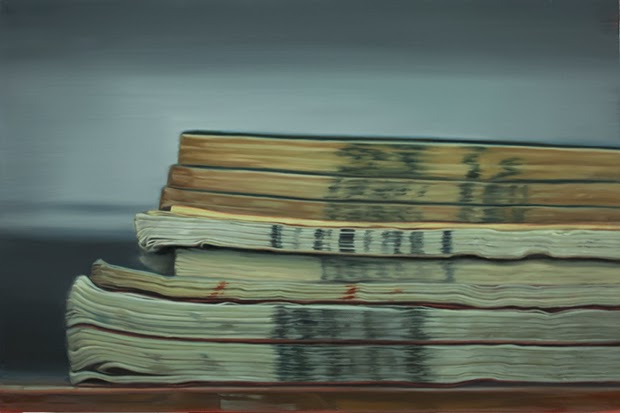 But Xie Xiaoze also enjoys painting library and archive materials themselves.  You have no idea what might be contained in these materials, but you can see that they are well worn repositories of information felt to be important at that time and waiting to reveal their secrets to anyone motivated to find them again.  As a complete and total book worm, I love looking at paintings of old books and old manuscript materials and I relished Xie’s paintings of these objects. 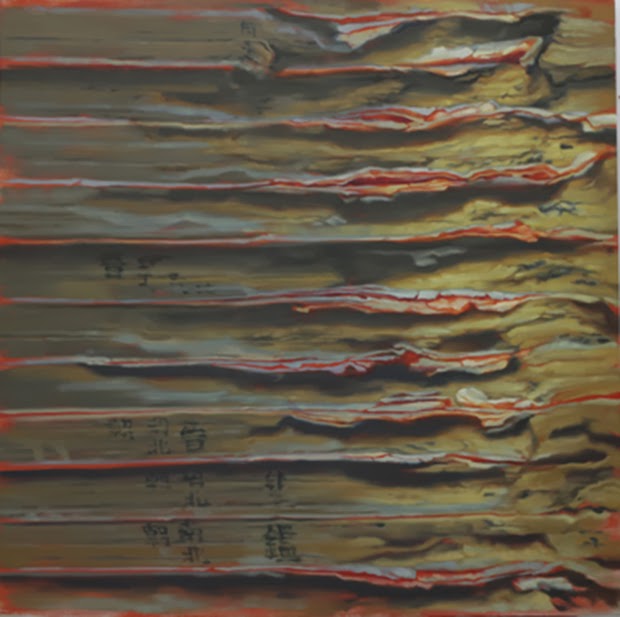 “Chinese Library 51” seems to contain ledgers of some sort – so you can only imagine the conclusions which could be gleaned by pouring through these.  “Chinese Library 55” shows a stack of printed materials which, as the notes for the show point out, borders on abstraction.  Yet, I love how Xie uses the color red in this painting to tinge the borders between manuscript covers.  My friend Wang Jing said it looks as if the books are “screaming” in this painting. Indeed, the reddish tinges kind of look like open wounds.  To me, the reddish color almost looks like the color in paintings of butchered animal carcasses hanging from meat hooks.  He really conveys the idea, through this use of color, that there was a living source, a living experience that left these materials behind and the materials remain ready to engage a living being again. These are the results of experience but also the beginnings of engaging, living experiences for others. 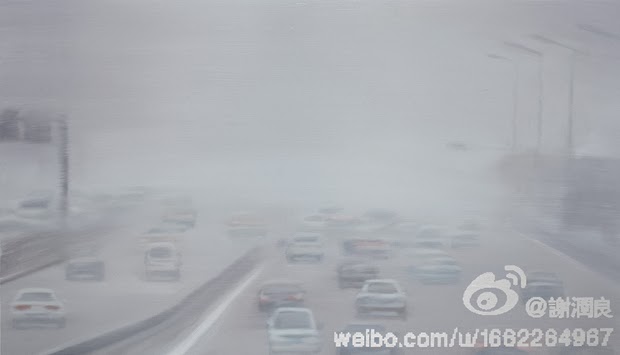 Finally, Xie Xiaoze did something I thought was very clever.  The super-realist tradition stems from artists who painted directly from photographs.  This was felt to be a type of heresy by some artists, but the super-realists wished to be provocative by painting directly from an indirect source.  They took a representation of ‘reality’ and tried to create something that looked super-real from it.  In many super-realist paintings, a sense of reality often oozes from the canvas more spectacularly than in real life.  Instead of using photos, however, Xie uses Weibo – which is a Chinese social networking tool similar to Twitter.  In the show are images from Weibo postings.  We see, for instance, a typically hazy day in Beijing and, in another piece, some type of house which is labeled as a “nail house” (sorry, I don’t know the back story to that one).  In the super-realist tradition, the paintings are not realistic at all. There is an extra sheen and clarity lacking in reality itself.  Yet, Xie plays with this by not just copying an image from Weibo, but by actually providing the Weibo ‘signature’ on the image as well.  So he uses a type of super-realist technique, but instead of hiding the source for his painting, he openly displays it. The “Weibo” signature forces us to view this image differently – Xie tempts us to be attracted to and to engage the image directly (the image is so vibrant) but at the same time he also forces us to acknowledge that we are divorced from the reality of the image due to its origin from the
internet. 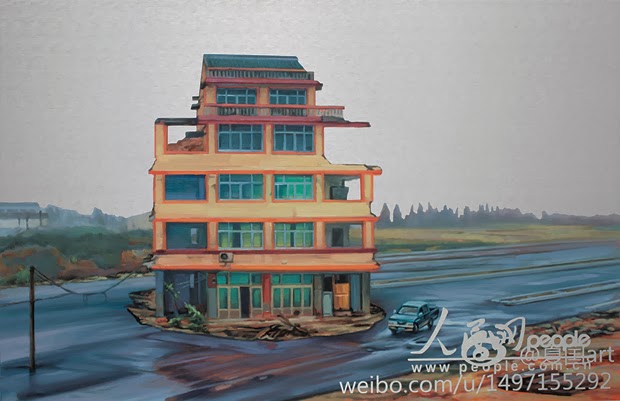 Chambers has been doing an amazing job of bringing the work of Chinese artists to Chelsea.  This show is open well into April – I would encourage you to drop by to take in these amazing paintings directly.