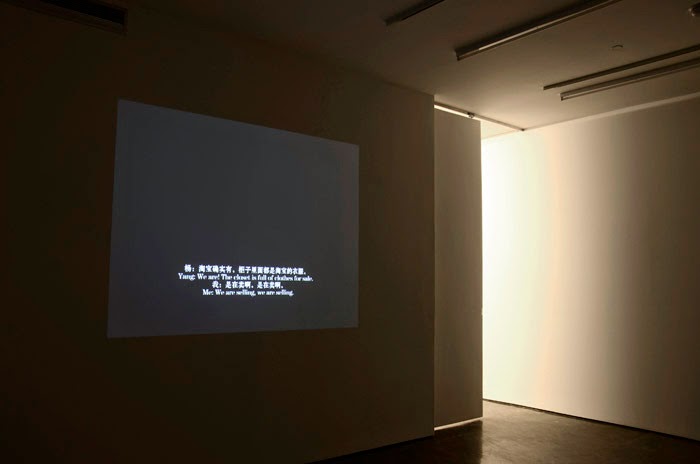 
By calling the show she curated “Simple Life Is Interesting!” Janet Fong hints at the thread running through the work of all 6 Chinese artists at this Klein Sun show.  Implicitly and explicitly each artist expresses reservations about traditional methods of representation and expression and often aims for a more direct engagement with the viewer based on personal experience. My intrepid art buddy, Jackie Zhu, and I saw that within the burgeoning and lucrative “Chinese art market” you’ve got truly reflective folks who are not buying into the commercialism, greed and exploitation, but who are legitimately pursuing means by which they can live and work meaningfully while interacting on a deeper level with others.

Li Liao, for instance, uses a smartphone in his two pieces here. So he’s not using any specialized art stuff/equipment and he only began with a vague plan for both of his pieces in the show – he’s letting stuff happen and hoping for the best. The implication seems to be that traditional methods and concepts have failed or are now boring or trite to us, and we have to stretch the field of art by being open to unexpected possibilities that life itself gives us.

In one piece he secretly records a heated conversation between his girlfriend’s father and himself.  We hear this conversation and see the dialogue projected onto a screen in a dark room.  The dad simply doesn’t want his daughter to marry an artist – not a real artist anyway. The dad is a publicist living the good life and openly rejects his potential son in law.  The artist could just as readily be attacking the dad for choosing a safe, comfortable life, but the dad uses his high status position to attack a guy who, apparently, refused to make commercial compromises and has suffered in practical terms for doing so.  The dad is in the position of power and reproach because he dominates his daughter’s life and consequently now has some element of control over the artist’s life.  The dad sits smugly beyond reproach and berates Li for not having any ‘real’ skills or even a studio.

When the artist points out he has been reviewed in a couple periodicals, the father denigrates the periodicals for their lack of respectability.  To make matters worse, the families are acquainted with each other and that dad openly despises the poor family that Li comes from, mocking them repeatedly.   The girlfriend has also been selling clothes on Taobao (the Chinese ebay) just to obtain funds for the both of them, which is also used as fodder against the artist.  My favorite line of the dialogue: Father: “You have no morality, no ability and no job!”  Artist: “What do morality and ability have to do with having a job?”

In another piece, Li travels from his apartment to the Windows of the World in Shenzhen – a popular tourist attraction that few locals bother going to.  The piece is called “Retreated to the Windows of the World” because Li points his iPhone 4 at his face as he walks, so as he walks forward he sees what’s ahead of him through his own eyes, but he also sees what he is leaving behind through the viewer of the iPhone at the same time (this is also what we see).  We see the stuff he passes, but we never see the stuff he’s heading toward.  The piece is over 2 hours long, and the chunks that I saw did not reveal anything overly dramatic, which was probably the point.  This was a safe pilgrimage to a safe place where all risk has been removed and you do not get any semblance of cultural authenticity.  He was journeying to a tourist trap – what kind of drama can you get from that? Does Windows of the World stand in for the current ‘safe’ and ‘respectable’ art market?  Possibly. 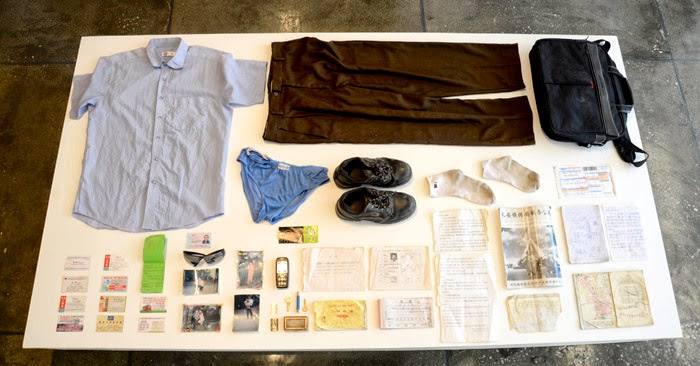 Liu Chuang, like Liao, refuses to use artistic stuff either.  He literally stops people on the street and tries to buy everything the person has on him/her at the time. He then takes everything from the person and displays it on a special platform on the floor.  So we look at the presentation and it’s kind of presented as if it’s art, and it’s in a gallery, but it’s not art, it’s real.  You get a real sense of the guy he bought these items from.  First of all, as Elizabeth Misitano from Klein Sun pointed out to us, you have to consider the type of person who would be willing to say yes to this proposal.   In this case, you see a cheap cotton/poly blend shirt and very cheap polyester pants (which do not even match the shirt).  You see the gentleman’s cell phone, which is a cheap, overly used probably 10 year old relic.  There is a letter the man has hand written about a need to obtain an ID card due to some type of problem he has had with the police.  His white socks are filthy from excessive walking in inexpensive gym shoes and he has very very old photos of himself with his children, from when they were all younger.  You feel a connection and a divorce from this person at the same time.  You feel his daily struggle in your guts and you are moved.  You compare your own daily struggle to his and wonder what your stuff would look like on this white board in this art gallery. 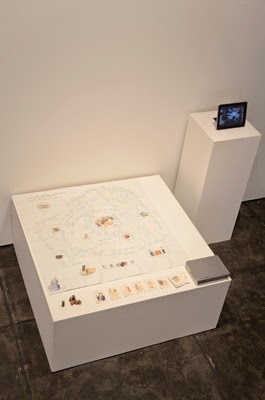 No Survivors is a duo of guys named Zong Ning and Wang Yang) and they seem a bit more openly cynical about the art world.  They provide a quite clever and amusing art board game.  You roll the dice and move forward.  You might land on a spot where your scooter gets stolen and now you have no inexpensive way to travel around the city on your limited budget (move back 3 spaces). 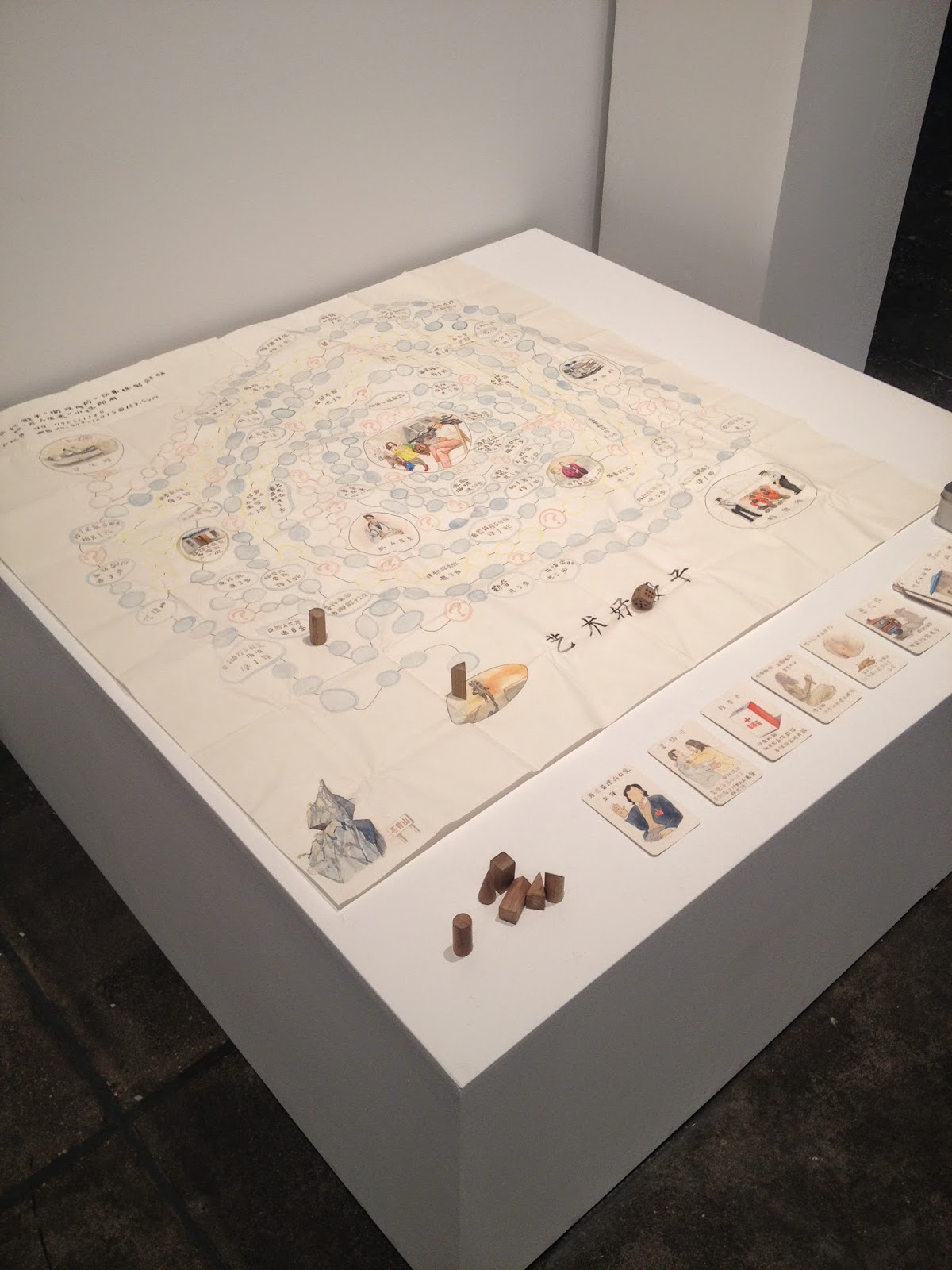 Or, you might land on a space that allows you to work for peanuts as an apprentice to an established artist who has been churning out the same product for 20 years (move forward 5 spaces).  As you get deeper and deeper into the game, questions of what you are expressing or shooting for as an artist become replaced by purely commercial concerns and if you are not careful you might land on a space where your entire studio gets dismantled by the police in the middle of the night (do you move forward or back from this? When it happened to Ai WeiWei he gained international stature). 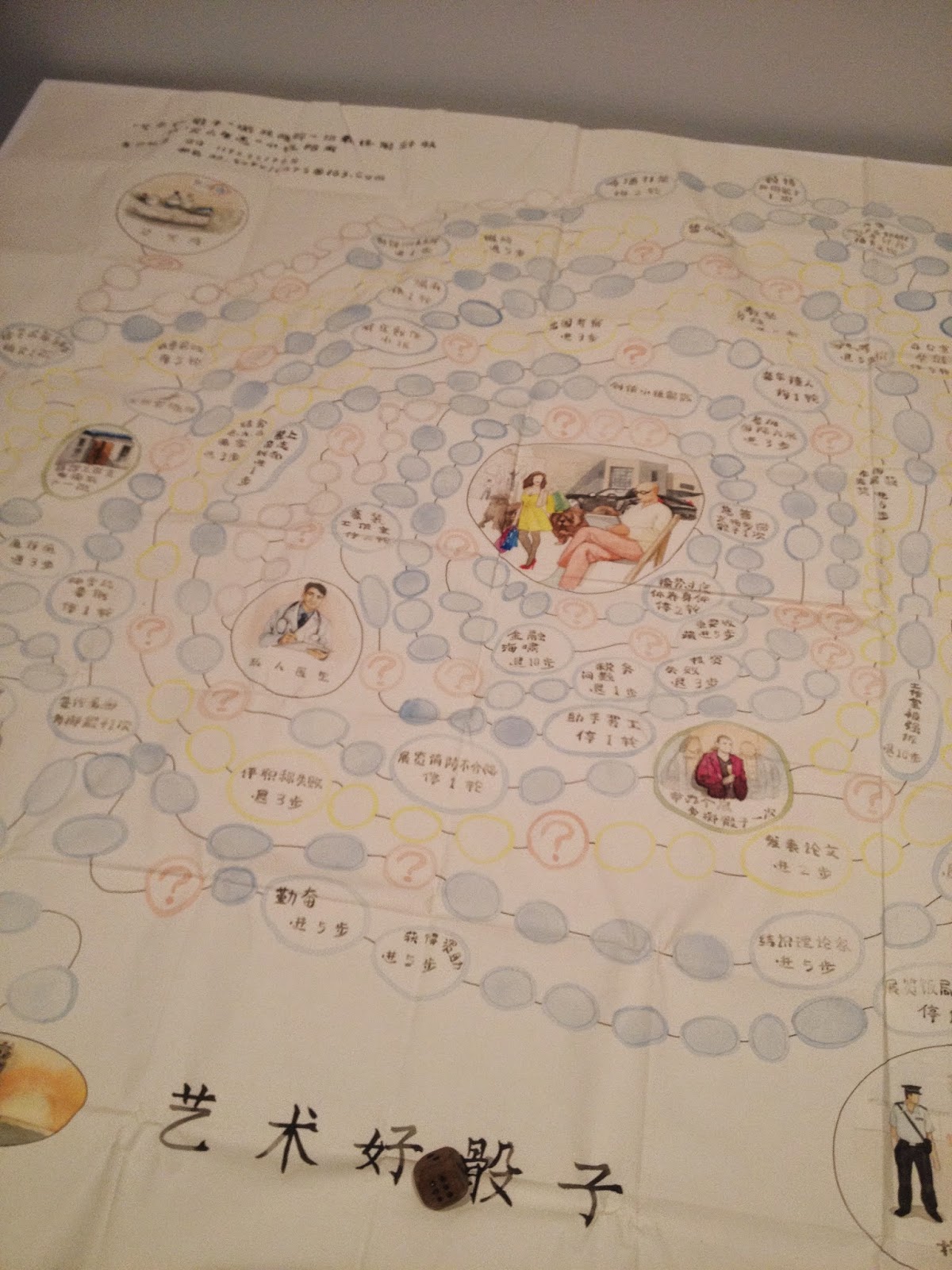 The implication is that stepping into the commercial art world can actively vitiate the process of self-discovery and engagement that should be the basis of art. It is replaced by concerns about fame and comfort. 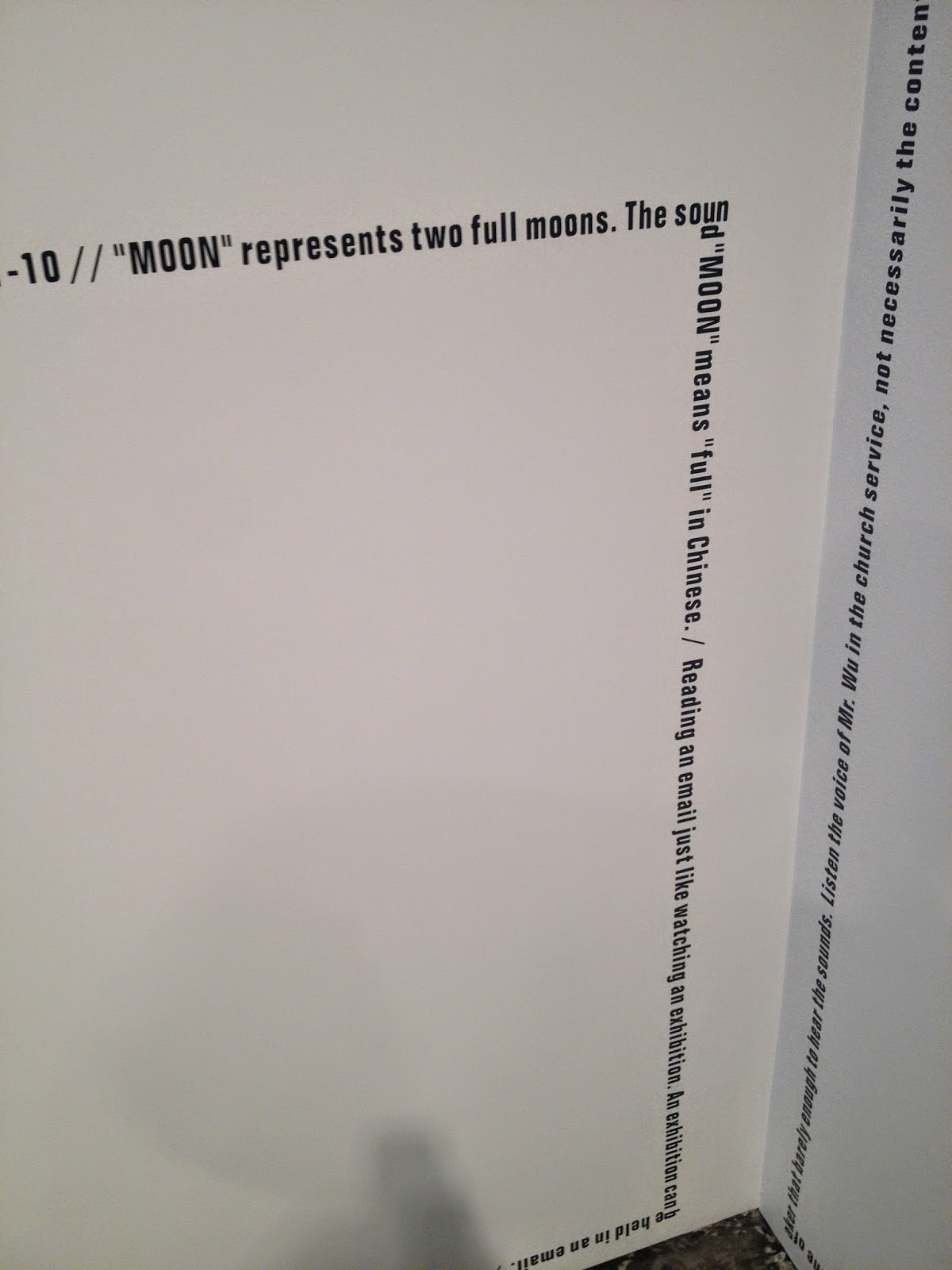 Pak Sheung Chuen carries around a notebook and jots down little observations or ideas for future works of art.  Statements he jotted down for a complete 7 days are recorded in English translation on some of the walls of Klein Sun. Some statements I randomly jotted down were: “Lyrics don’t make me cry, the voice does.” Top floors of buildings are temples, bottom floors are churches.” “The moon in the daytime is like the sun.” “Put yourself in someone’s eyes” “Turn a logo into a seal of Buddha.” 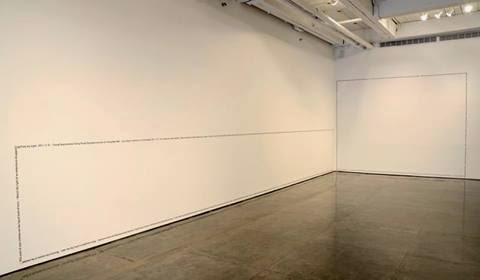 These statements are, interestingly, placed on the wall in a box format, as if the artist is literally ‘trying to think outside of the box’ but finds a limitation in his own thoughts. His thoughts ultimately form right angles and descend or ascend into a prescribed pattern.  They take this boxlike form showing empty space within and a huge outward expanse of space without, implying the limits of language and inviting movement into broader spaces provided by real transformative experience. 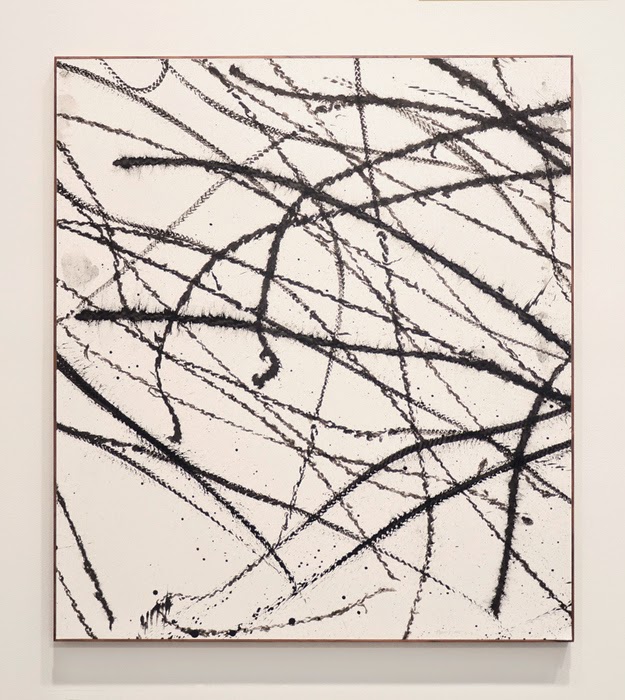 Finally, Yang Xinguang takes traditional Chinese rice paper, seems to coat a bull whip with black ink or paint and then he literally whips the paper.  You see the black imprints of the twined whip on the rice paper itself.  The obvious interpretation is that this is process art in which he is expressing scorn for this traditional means by which to represent something, but given the principle of yin and yang (active and receptive) that permeates Chinese culture, the white rice paper is the yang (receptive) element being subjected to a type of force and abuse by the not just active but violently active (yin) principle, represented by the ink applied through a whip. Art is no longer a harmonious combination of yin and yang but an abusive relationship between these principles. 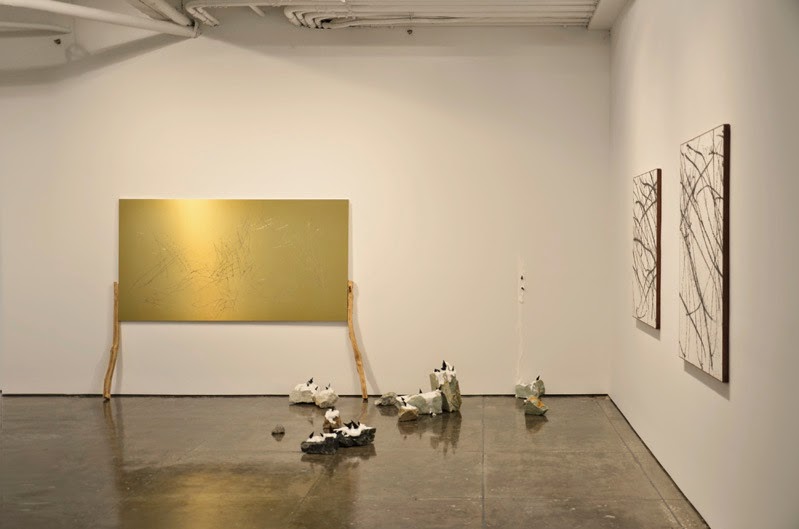 He also presents a large gold panel with scratches and indentations.  This is gold which is usually valued and hoarded, here it is violently attacked.  He presents his own little Wagnerian Ring Cycle in which he cautions against the pursuit of money and fame, indeed, he seems quite angered by the presence of the gold panel.  He also presents little dioramas of what might be called a broken forest.  He has big chunks of individual rocks on which evergreen trees have been bent through some type of force.  The implication seems to be somewhat like Heisenberg’s uncertainty principle - in the process of viewing nature and representing nature, we destroy nature.  The process of art, in this case, does not serve to represent and convey something meaningful, in the very process of trying to represent and convey meaning, we can garble and wreck that which is valuable and meaningful.
Posted by Daniel Gauss at 9:45 PM