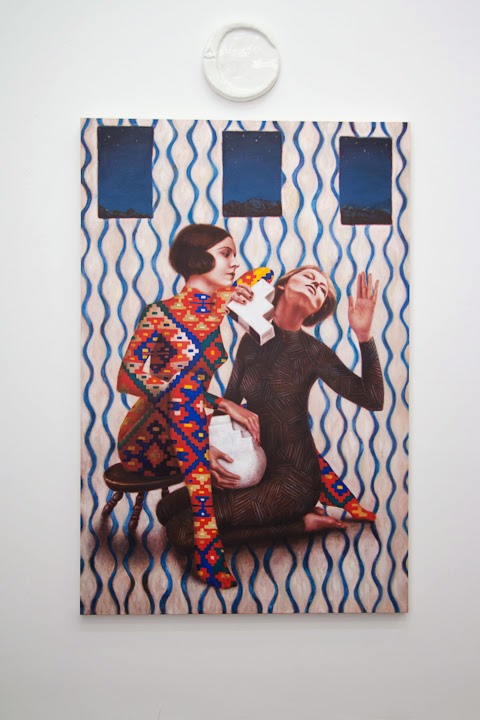 In James Frazer’s “The Golden Bough”, he makes the theory that all mythology stems from ancient magical rituals.  This is, in fact, the ‘other’ theory about the origin of mythology – most folks are familiar with the Jungian/Joseph Campbell theory that people share subconscious ‘archetypes’ around the world.  Frazer, however, did a yeoman’s job of empirically citing and cataloguing magical practices around the world, and throughout history, to support his theory.  Among other things, he shows that the concept of ‘birth-death-resurrection’ began as a magical ritual to ensure good crops during humankind’s agricultural phase.  This ritual morphed into a story (Osiris, for example, embodied the life force of vegetation which grows, is cut down and then resurrected) and when people flooded into cites, they abandoned magic but kept the stories based on magic, which became further developed as mythology. Stripped of magic and planted in the city, mythology became the language for a new type of inner spiritual journey. 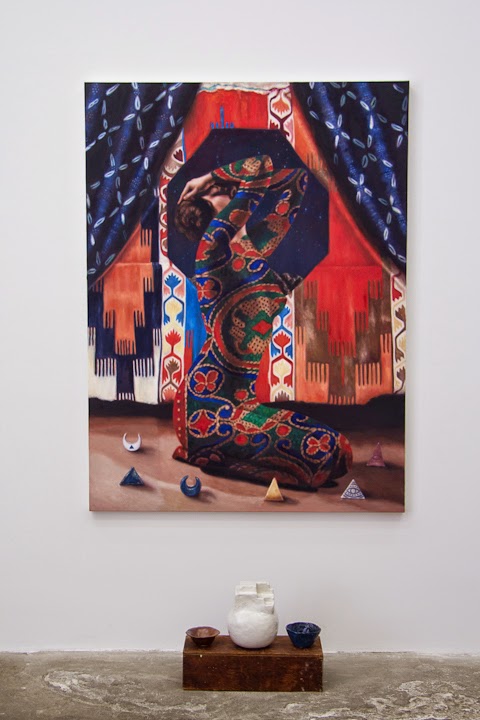 So what’s interesting about Alison Blickle’s pieces at Kravets Wehby Gallery is that she is taking the traditional concept (documented by Frazer so well) of magic and applying it to a type of inner process that seems to be the primary promise of most spiritual/religious systems. Magic is no longer the ritual to ensure good crops, better health or a smooth childbirth.  The midwife from the middle ages who brought with her various secret herbs and magical practices is, in fact, in these paintings, but seems to be there to help initiate and guide the inner journey, with the aid of stone sculptures and sundry symbols (kind of like the way folks stood by in the 60s to make sure an LSD trip would not go too far south). 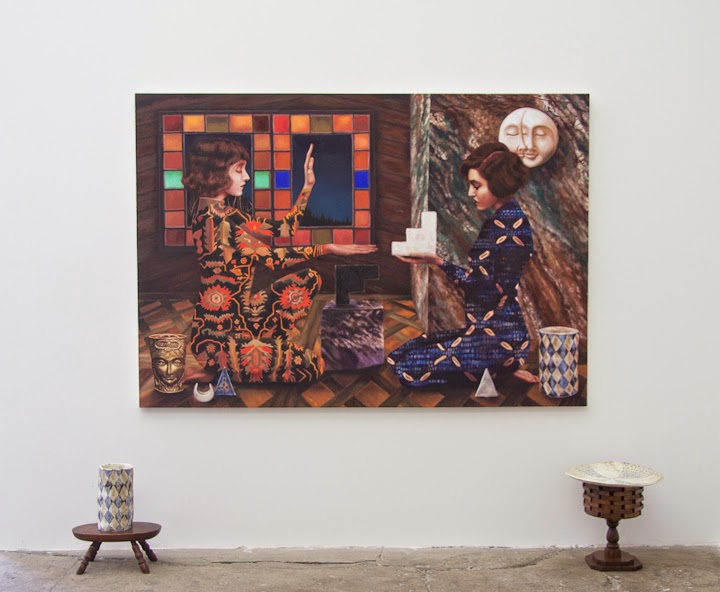 We see this most clearly in her “Fighting with the Shadow” (not shown) piece where one woman seems to be undergoing a St. Theresa type ecstasy, curled toes and all, while another gently holds her down.  The ecstatic woman caresses a stone sculpture which is part orb and part staircase. Indeed, the same types of symbolic objects that one sees in the paintings are scattered all over the gallery, as if the artist is inviting the public to also partake in the journey represented on canvas.  She seems to be saying, “This stuff is real!  This journey is possible!  This stuff on the walls and on the floor really means something goddarnit! This is important! This is not just art, in fact, art is never just art!” 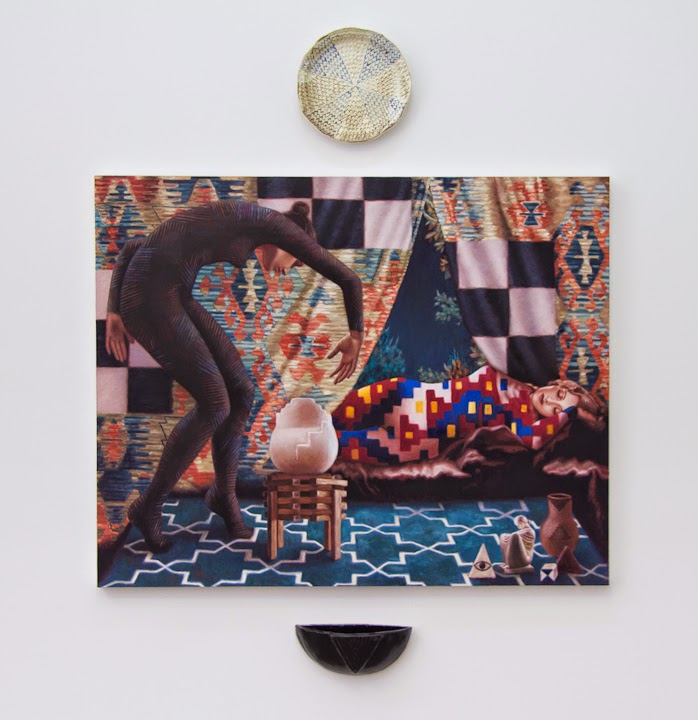 Many of her female figures are covered with body paint replicating art deco designs, which, it seems, were based on Navajo and ancient Egyptian patterns.  It’s as if the characters in the painting are reclaiming the arcane value of designs treated as purely decorative in our world and literally clothing themselves in this for their inner trek.  The outer-trappings represent the inner process the characters are shooting for.  They have understood the patterns and the symbols and simply need to take them from the realm of outside concepts and translate them into inner states of being. In many paintings there seems to be an expert and an initiate, thus the name of the show. 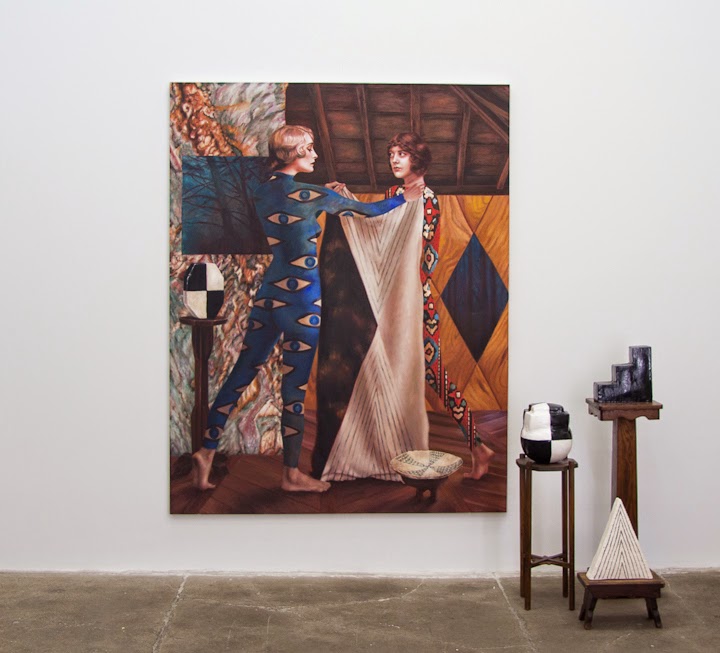 In fact, there’s a lot of interesting theory behind this show.  In the program notes it seems that Blickle has been inspired by “French occultist and writer Eliphas Levi’s 1860 book on the historical use of
sacred imagery in art” as well as by the Pre-Raphaelites, Post Impressionists and the symbolic sculptures made by James Lee Byers in the 1980s.  Indeed, in the program notes it is mentioned that, viewed broadly, the show can even be about the extent to which art can succeed or is doomed to fail as a means of capturing meaningful and transformative experiences and engaging others with them, or even ‘initiating’ others into the process being depicted. 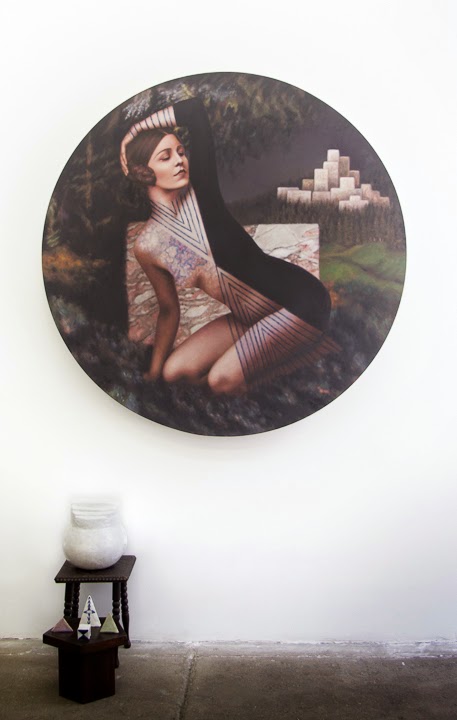