Letters from Home by Jason Bryant at Porter Contemporary in Chelsea 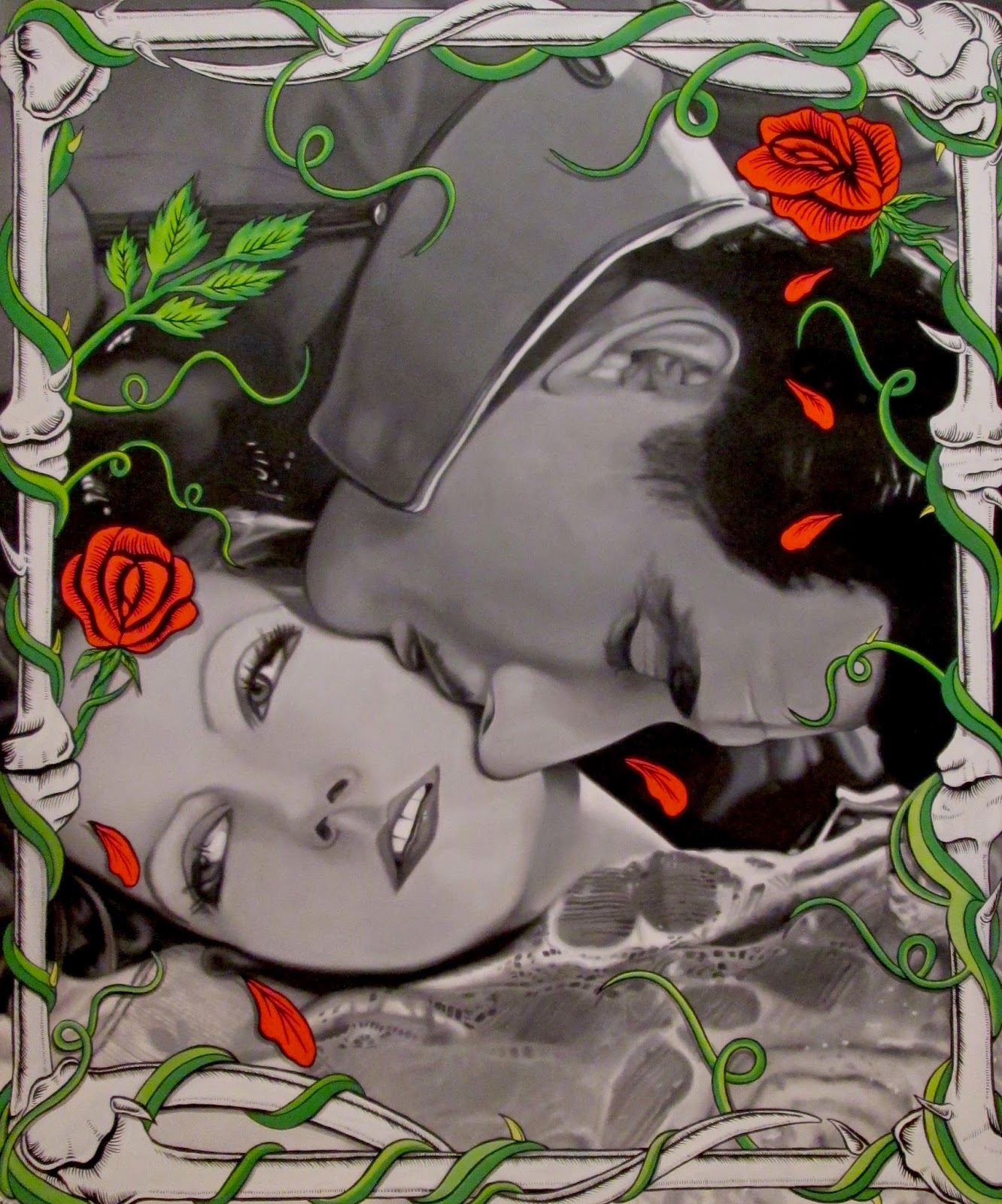 I have the feeling that most war movies are really religious epics in disguise.  You have the hero’s journey in virtually each one. The young man leaves home, faces adversity, risks death, kills the enemy, comes home and gets married.  In literature Odysseus was the first guy to really be represented as doing this, as far as I can tell, and he became the archetype of the reluctant warrior who is torn from home and now journeys back home.  The ‘masculine’ is separated from the ‘feminine’, wanders and kills, then rejoins the ‘feminine’ in domestic bliss.  In allegorical literature the ‘masculine’ represents a desire for fulfillment while the ‘feminine’ is the object of desire, or the fulfillment itself.  It’s the eternal allegory and Hollywood has cashed in on it royally. 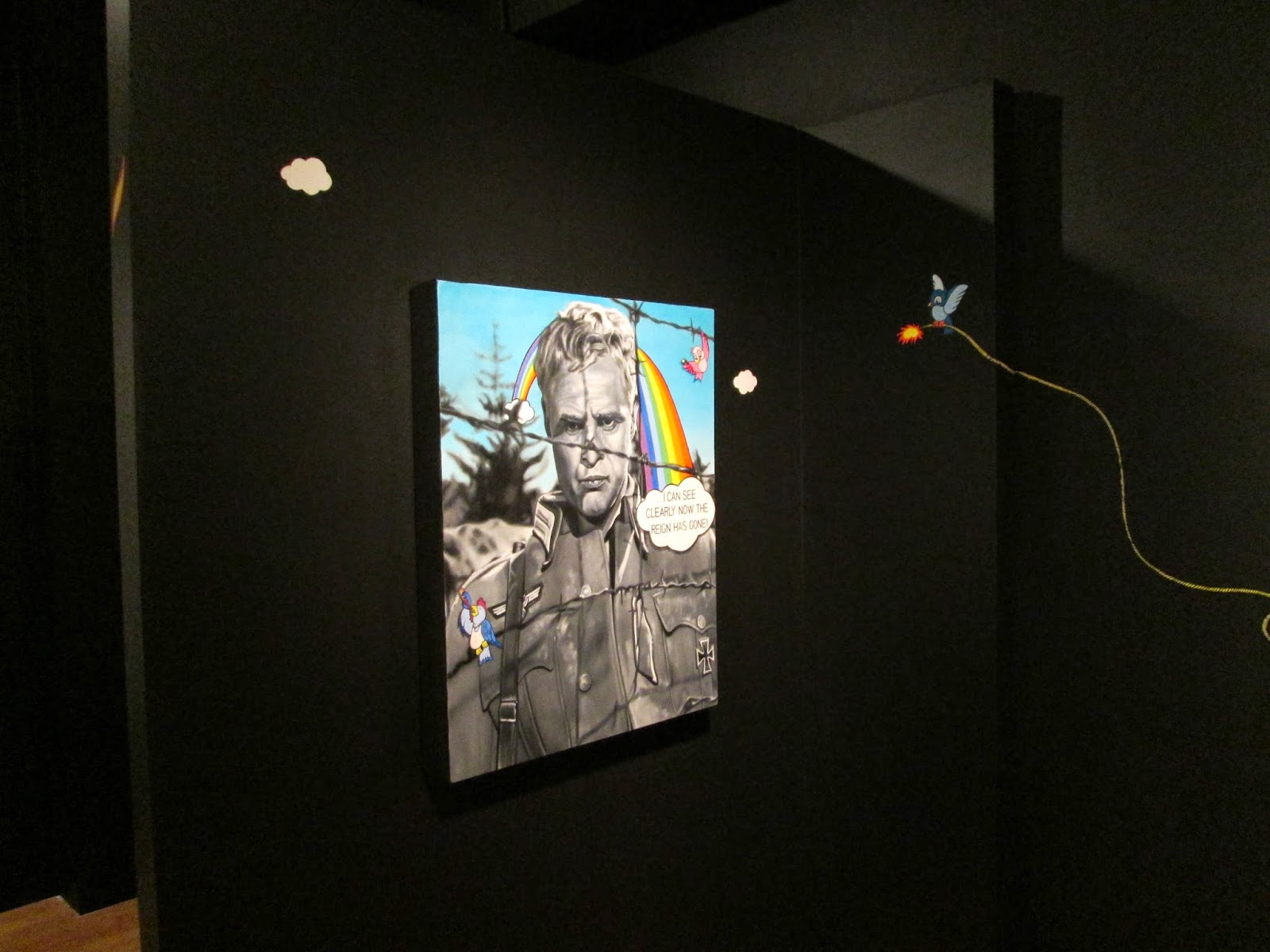 For his latest series at Porter Contemporary, Jason Bryant draws from a forgotten canon of Hollywood war-themed masterpieces and adds skateboard iconography to many of the classic images from these films. Although Bryant explains that he is merely combining two things he has loved (old films and skateboarding) the skateboarding iconography becomes kind of an additional language or narration to the pieces. The iconography can be considered an affirmation of the image, a contradiction of the image or a further elaboration on what is happening.  The skateboard iconography is like the ancient Greek you see scribbled on Byzantine icons – you have no idea what it means, but it looks cool and adds meaning to the image primarily because you can’t understand it.  You have to investigate all the options of what language can and cannot do in relation to the iconic image.

Also, what’s interesting is that the initial image in each of Bryant’s paintings is not emotionally ‘authentic’.  That’s Marlon Brando in one painting, with a look of ethical confusion on his face, not a real Nazi officer who is beginning to question his allegiance to the Third Reich.  It’s like the Hollywood star elevates the moral conflict to a higher level for us. It’s not just a moral conflict, it is BRANDO acting a moral conflict.  This is a REAL moral conflict, baby, because Brando’s doing it!  The authentic is taken by Hollywood, made inauthentic by having an actor do it, which then makes it super-authentic.  It now becomes something for us to file away and shoot for, potentially, one day.  Hollywood takes the simple and real and makes it the ‘normative’.  This is why, I guess, when anything unusual happens, or anyone does anything out of the ordinary, the first thing people say is, “It was just like a movie! I thought I was in a movie!”  It could be that Bryant is parodying this whole process in that a tacky rainbow and cartoon figures accompany Brando in this particular piece. Or, is this, in fact, a type of ironic validation? Should we view the skateboarding symbols as judgments which are sincere or as signs of tacky contempt? 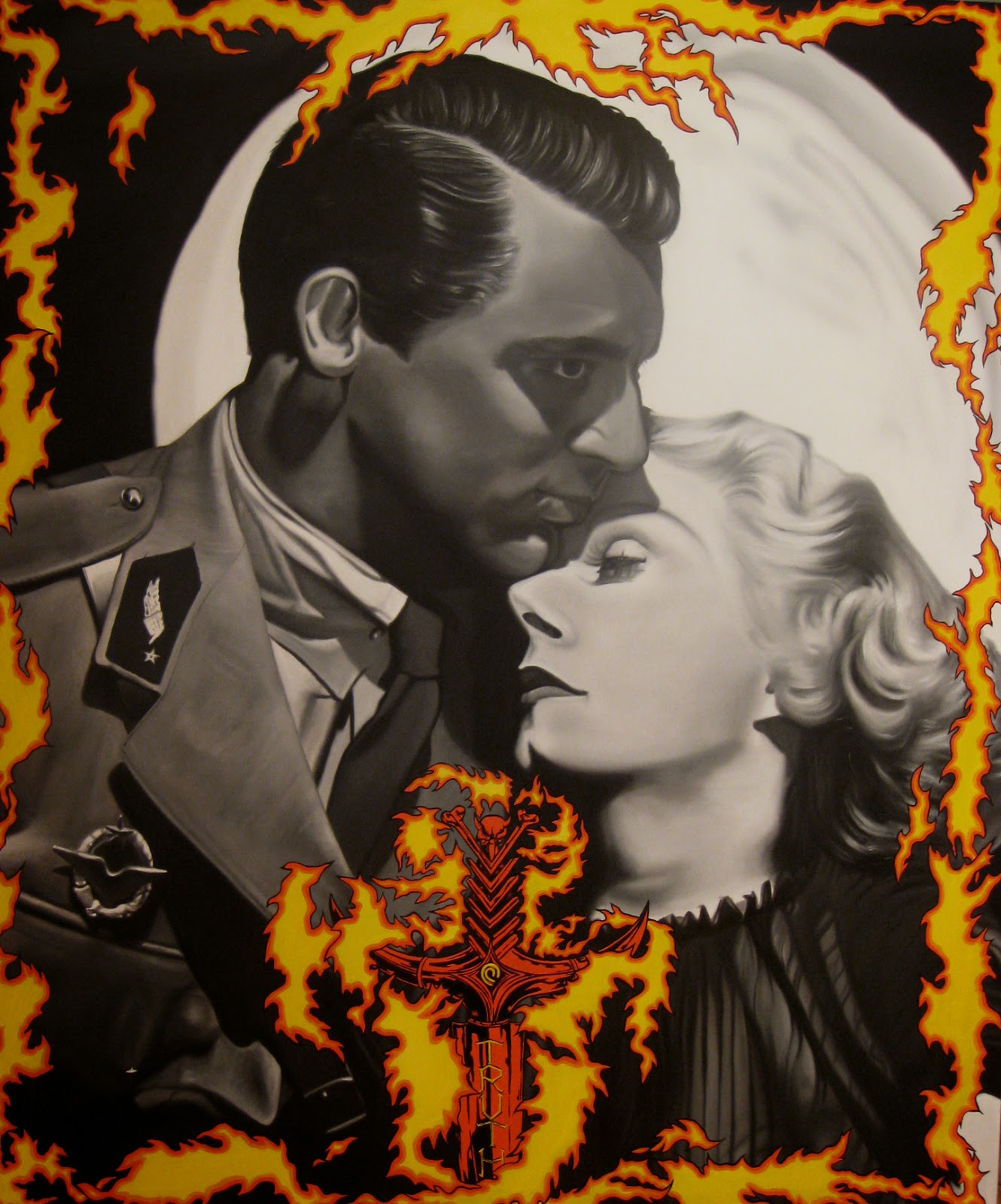 In “Knowing This Will Be the Last Time,” we have Cary Grant as the eternal masculine and Jean Harlow as the eternal feminine.  Grant is looking sharp in his military uniform, staring ahead of him, aware of the great dangers and risks ahead.  Harlow has closed her eyes and tries to savor the last moments she will experience with him. You know that they know that Cary’s not coming back.  Actually, he will be coming back because he signed a contract with Metro Goldwyn Meyer, but he won’t be back in this film.  This image is taken from the film “Suzy” co-written by Dorothy Parker.  The image of Grant staring off at his fate while Harlow looks inside herself is captured so perfectly you could scream…it’s so mawkish it’s beautiful.  This is what a departing warrior looks like. Bryant surrounds the image of these departing lovers with literal flames surrounding a burning sword. 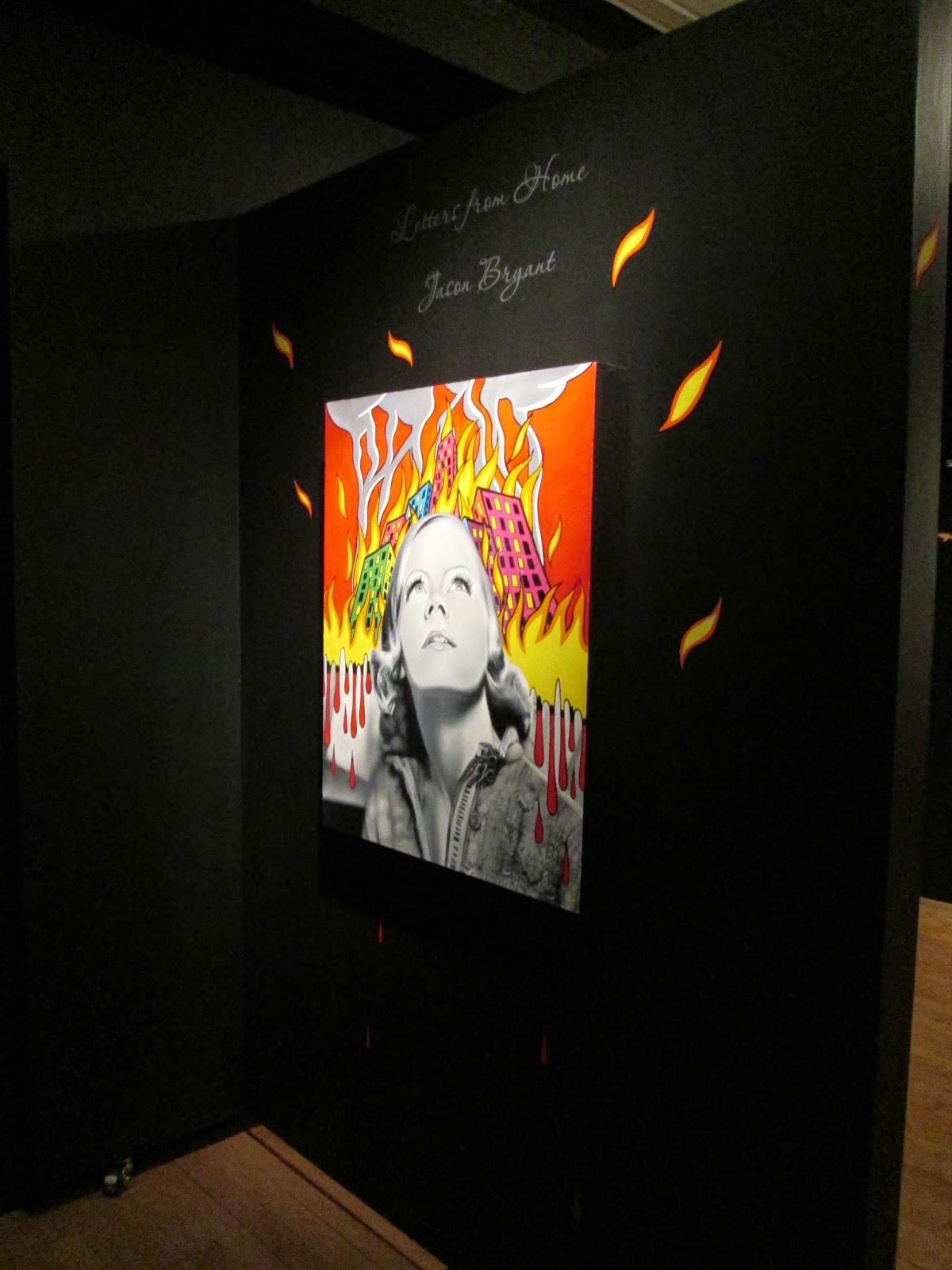 In this show, the Hollywood images seem to tell you what ‘real’ or ‘allegorical’ situations look like (or should look like).  When we kiss, we should kiss with destiny in mind, like Garbo and John Gilbert; when we struggle with a moral issue, we should let our jowls drop and stare into space like Brando and suffer.      The skateboarding symbols always seem to provide a wry commentary on this whole process.  They can brand an image with coolness or contempt, but it is often hard to determine which judgment is being offered…in fact, many times, the symbols seem to connote a mixture of admiration and contempt,  which makes all of these pieces by Bryant very cool indeed. 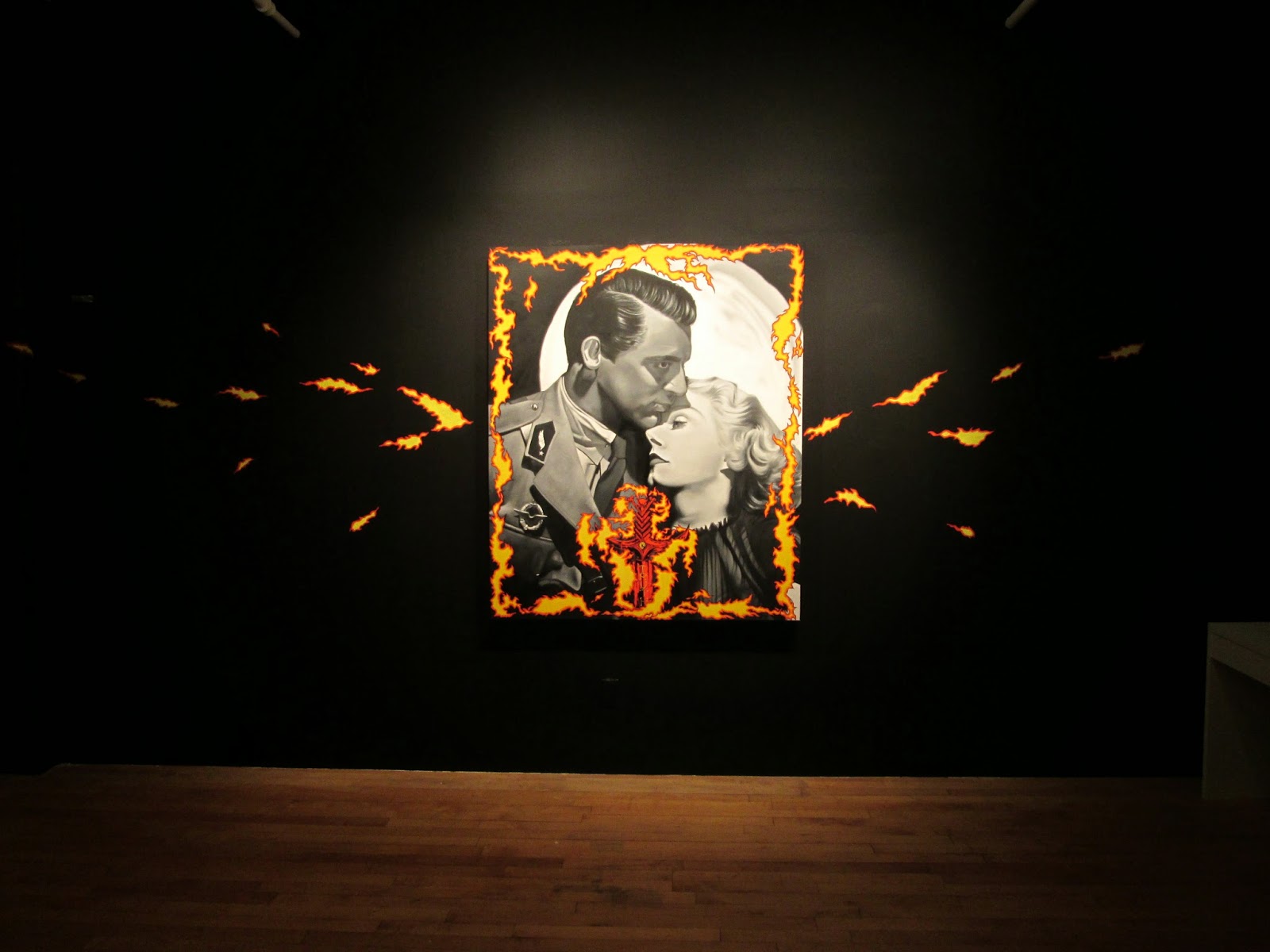