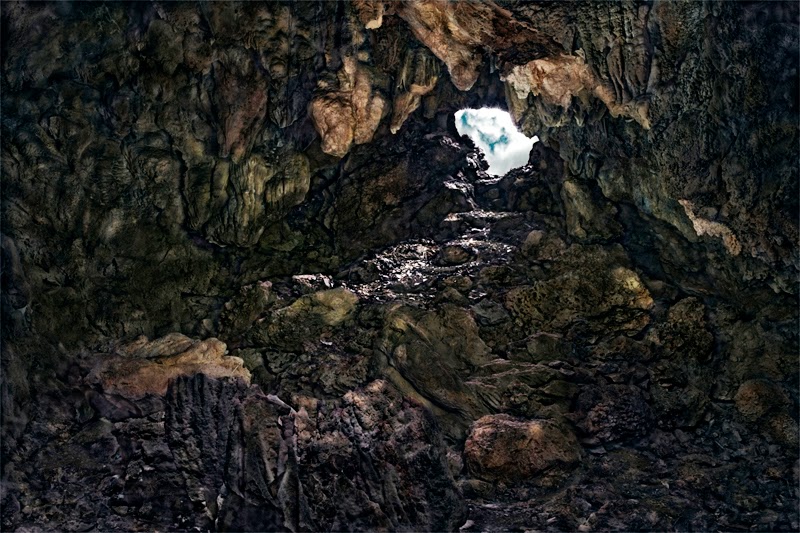 
To this day the governments of South Korea and China feel that Japan has never fully taken responsibility for the atrocities it committed in World War II.  For their part, many Japanese feel that amends have been made and apologies tendered and that other Asian countries may have various ulterior political motives for dredging up aspects of a war that ended almost 70 years ago.  Yet, the current right-wing government of Japan, headed by Shinzo Abe, seems to continually make or encourage provocative gestures toward countries victimized by the war.

Osamu James Nakagawa has been interested in the history and geography of Okinawa for some time and has had previous gallery shows and books published of photos from this region.  Indeed, his Gama Caves photos constitute the third of a trilogy of shows and books about Okinawa (from which his wife hails). 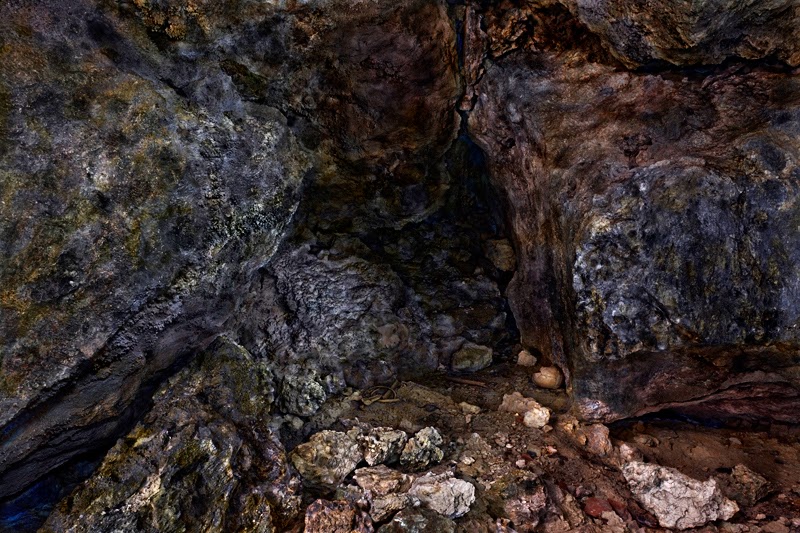 Inspired by a report that atrocities from the Battle of Okinawa may be edited out of Japanese history text books, Nakagawa decided to visit and photograph the Gama Caves there. These were caves where thousands of native Okinawans died during the battle in April of 1945, in which the US launched one of the largest amphibious landings of the war, preceded by one of the most brutal bombardments.

Initially Okinawans took to these caves for protection.  The bombardment by US naval guns was so severe, and so thorough, that the Okinawans called it “The Typhoon of Steel.”  US military observers expressed doubts that anyone could have lived through the bombardment.  The inhabitants of the caves, however, who survived the American onslaught, were not allowed to simply go home once it became apparent that the Japanese military was going to lose.

Okinawans were then informed that they were Japanese citizens (they had been swallowed up by Japan in the late 1800s) and were forced to fight to the death against American forces, prompting thousands of Okinawans to simply commit group suicides through various means in the caves (often by smothering each other or using hand grenades given to them by the Japanese). There are some stories that Japanese soldiers required such suicides as they, themselves, were going to die and were not going to leave anyone else behind. 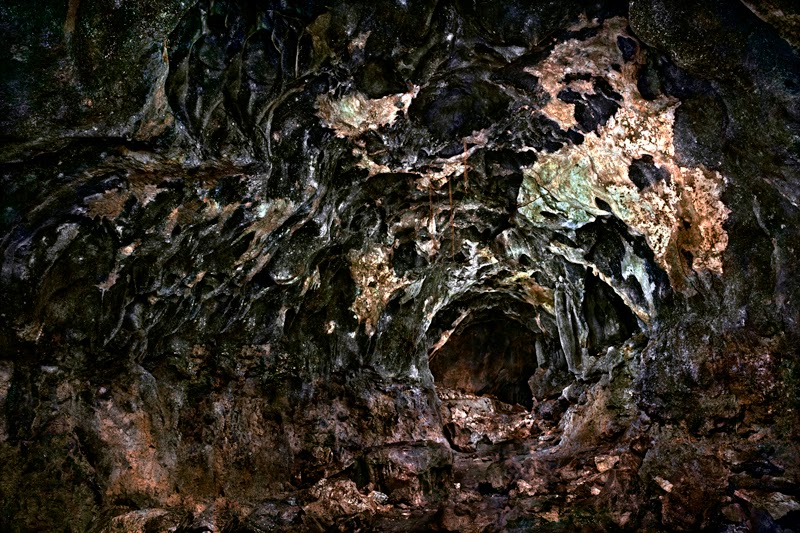 Nakagawa does not go into the Gama Caves as a historian or archeologist.  He is not looking for validation of a historical record nor is he collecting evidence.  He accepts the story of the mass suicides as legitimate as well as the facts of the American bombardment and the use of the caves by the Japanese military for defense and hospital purposes.  The caves were a great underground stage in which acts of absolute horror occurred unknown to most of the world.  There is little or any photographic documentation of these horrors from the time.  The stories have been passed down through the generations by Okinawans, not recorded in official Japanese or American history.  To me, he arrives late, but he arrives reverent and deeply sad, going into the caves as a personal act of compassion to express his deep sympathies and sense of loss and horror for those who were brutally forced to die by two superpowers who viewed the Okinawan people as peripheral to their own national concerns.

The true horror from these photos seems to be that no trace can be found of the horrors that occurred in those caves. The caves are beautiful and serene. I’m reminded of what Peter Weiss has the Marquis de Sade say in his play Marat/Sade: “Every death, even the cruelest death, drowns in the total indifference of nature. Nature itself would watch unmoved if we destroyed the entire human race.  I hate nature, this passionless spectator, this unbreakable ice-berg face that can bear everything. This goads us to greater and greater acts.” 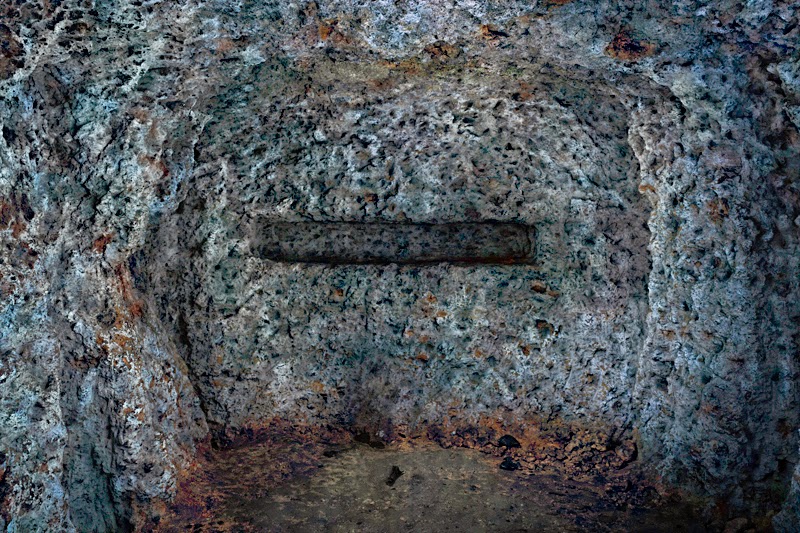 The peace and beauty of the caves demands, however, our human response and I think this is the ‘theme’ of the photos.  In response to nature’s indifference, we are required to speak the truth and remember and to allow these horrific events to move us continually to the extent that we simply have to live our lives more meaningfully and compassionately and militantly against acts of aggression and inhumanity. To me, the caves represent every stage on which an atrocity has been committed and potentially forgotten.  We don’t remember, for instance, the 2 million Vietnamese we killed between 1964 and 1973. Or what about the Filipinos we killed in the early 20th century so we could give that country its ‘independence.’ The Philippines and Vietnam have rebuilt their societies and moved on.  But we don’t even remember slavery or the genocide against the Native Americans as anything other than factual information.  Tourists wander into the Little Bighorn and take photos of themselves among tombstones of Custer’s soldiers so they can say they were there.


So to me, these photos are a type of process art by Nakagawa.  It’s the gesture that seems most meaningful. In response to the fading memory of the horrors of World War II and in response to the utter lack of historical attention given to the suffering of the people of Okinawa, he takes a stand. He goes into the caves to pay respect and consideration for the gratuitous and unspeakable suffering that happened here.  He then offers these photos to us, for our reflection on our own attitudes toward the horrors of the past and how we view the horrors of today. 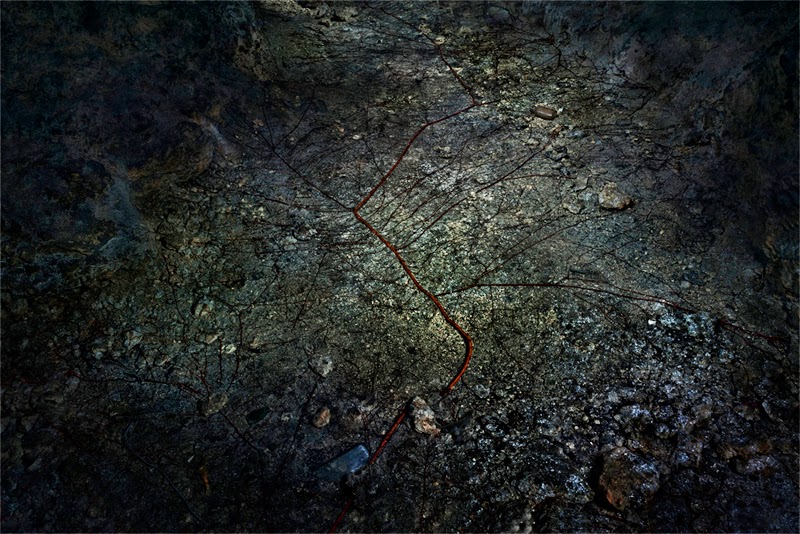