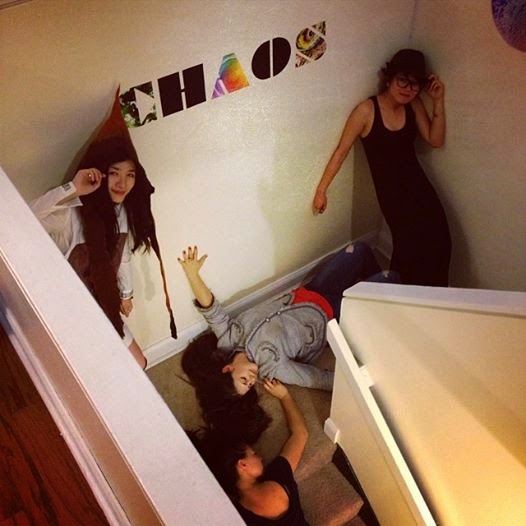 {{click on images to enlarge}}
As Yue Su was finishing her Masters’ thesis (comparing and contrasting gallery models in China and the USA), she was also in the process of clearing out her apartment, with her roommate Tianqi Chen, for their near-future move.  As the living room became more and more sparse an idea began to form.  When they met Iris Xing, a photographer, and learned about her idea for an installation piece, the idea for their “Chaos” show, in their Roosevelt Island apartment, took root. 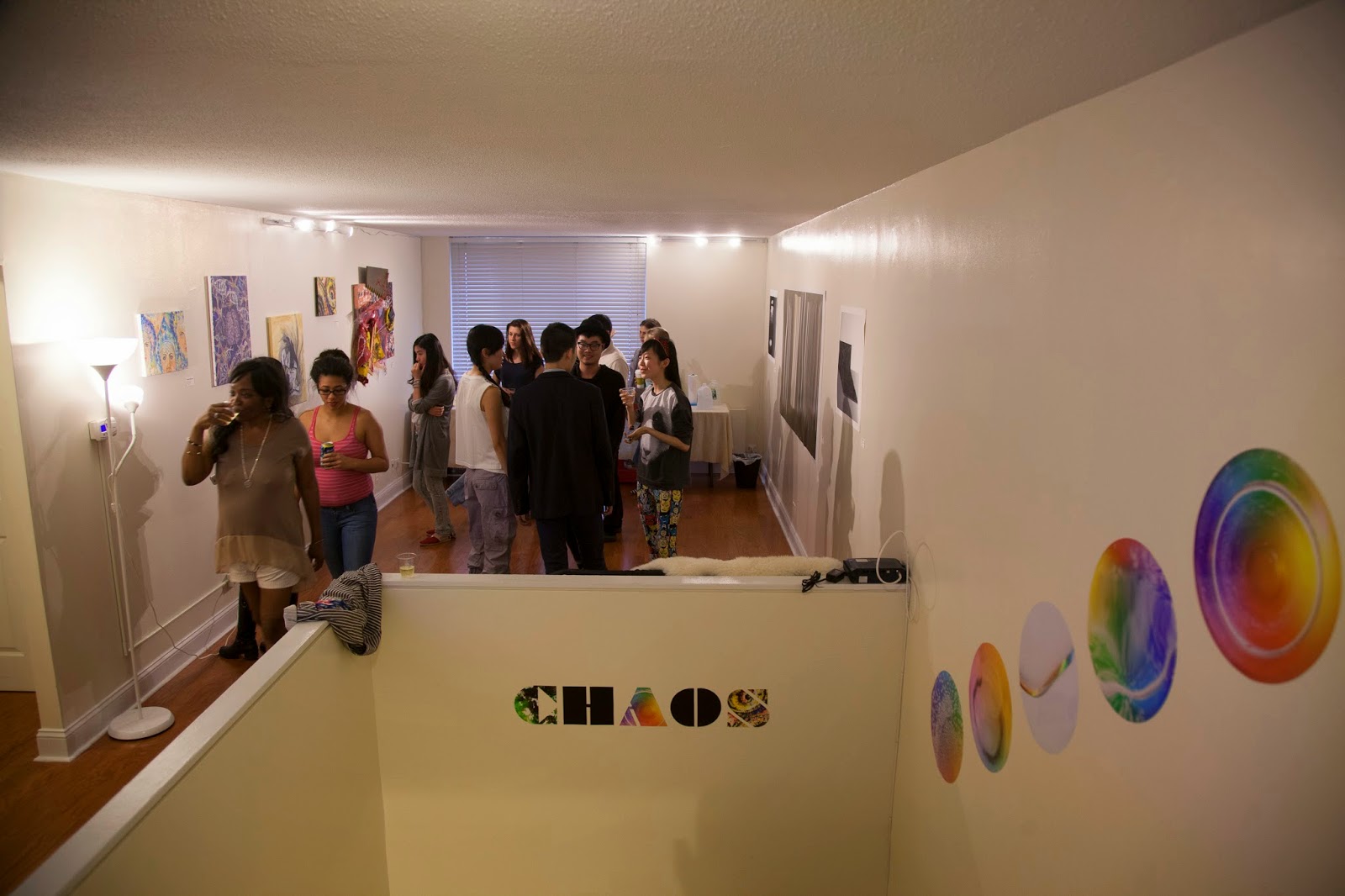 The idea of apartment galleries seems to be catching on in some cities in China, and New York City, as a statement against the corporate models under which some of the larger galleries are now being run.  It’s also a protest against the process by which ‘famous’ artists are selected and promoted by the economically powerful galleries.  Basically, apartment galleries are a protest against the rabid commercialism and lust for fame one often sees in contemporary art.  A show like “Chaos” tries to refocus on meaning and connection and not on money or fame.  At this show, I actually asked a couple artists what they would charge if someone wanted to buy their art.  One said, “I don’t know.”  Another said, “A buck.”  So this apartment gallery show was more about community and the sharing of ideas and meaningful interaction than making a profit. 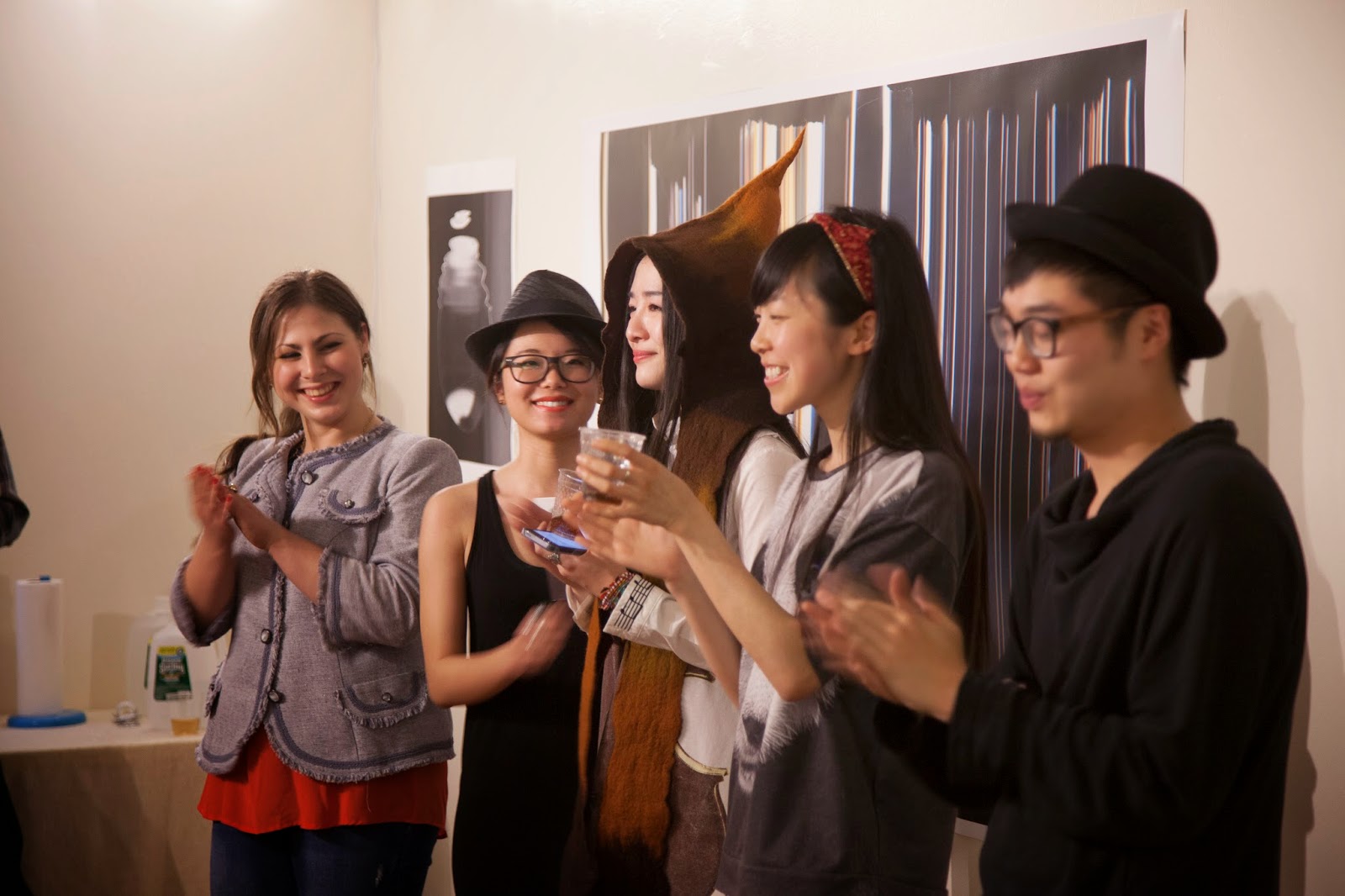 Indeed, this apartment building actually has some real diversity in it and some folks from the building who might not go to a traditional Chelsea gallery even ventured over to take a look.  So folks who might not see themselves as Chelsea gallery hoppers felt comfortable about coming over to a neighbor’s place and checking out Chelsea gallery quality art by three up-and-coming artists: Iris Danlu Xing, Victoria Nikaveron and Xiaoyang Jin. 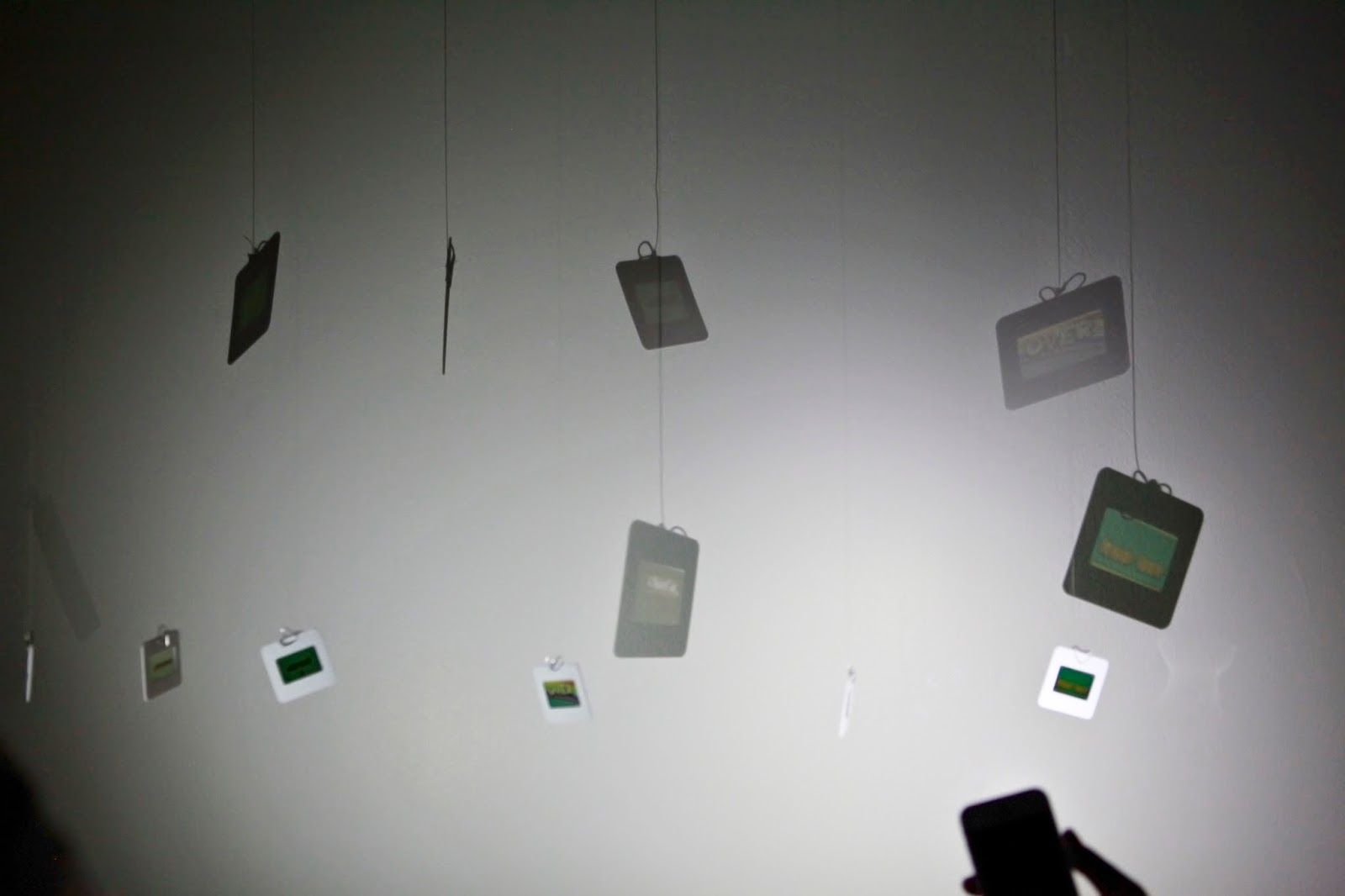 Iris Xing’s installation piece “Game Over” was the inspiration for the concept and it is located in one of the darkened bedrooms of the apartment.  In her daily rides on the subway she sees so many people playing various types of cell phone games as they ride to work or school.  She’s also a bit near-sighted, so when she sneaks a peek at what her neighbors are doing on their cell phones, she often gets a blurry impressionistic image of some type of goofy, mindless video activity – little blocks falling, creatures running through mazes etc. Then, after the effort to see what a neighbor is doing, she often feels guilty that she surreptitiously struggled just to see blurry blocks or a screen that says: “Game over!” 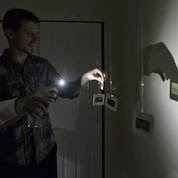 Indeed, she noticed that “Game over!” is usually displayed after most cell phone games end and it is the point at which the person has to choose whether to put the gizmo down or to continue another game. Invariably Xing notices that the game is never really over as folks just seem to be addicted to doing these mind-numbing activities. It’s as if they cannot even spend 20 minutes with themselves alone with their own thoughts; every moment has to be filled with some electronic stimulation. A person could be reading, thinking, relaxing, memorizing a poem, jotting down journal entries – any number of more meaningful and enriching activities, but, sadly, folks go for the cheap, easy thing that provides no enrichment whatsoever.  The morning transit is time to be thrown away not precious time to be used.

So in the completely darkened bedroom you see a series of slides dangling from a horizontal string and you are invited to use your own cell phone to provide illumination through the slides to project an image onto the nearby wall.  After struggling to get the right amount of illumination at the right distance and angle from each slide so you can read the image on the wall, just as Xing struggled to spy on the images on her fellow-riders’ cell phones, you realize that each slide is an image of the ending of one of several different video games, the most prominent ending being “Game over!”  So your cell phone itself is used as a means to illuminate the sign “Game over!” This seems to represent a possible turning point where you have finally realized that you have been doing something utterly stupid and that you can no longer go back to this.  It can also be a type of admonition that, yes, the game is over, it should be over and now it’s time to transition to something more relevant to life.

More broadly the artist can even be criticizing the over-reliance on these electronic gizmos in our lives.  The internet and the iPhone and iPad etc. have provided a huge economic boost and tons of entertainment, yet yearly test scores and the writing skills of young people are in chronic decline.  The SAT test is now even being dumbed down for the internet generation’s lack of high-level vocabulary.  Just what are these continuous electronic innovations giving us?  So “Game over!” is not just an admonition against stupid cell phone games but an admonition that ‘information technology’ might not really be meaningful information technology and that we may have abandoned something that worked for something that is gratifying, makes life “easier” but is, in reality, harmful. 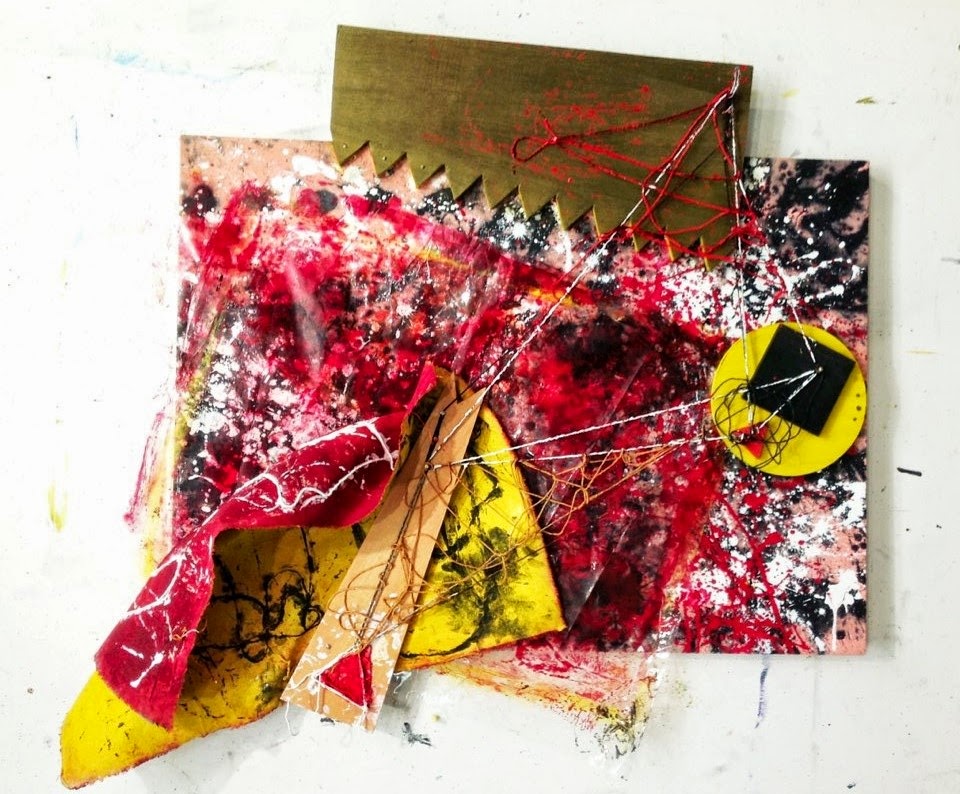 Nikaveron had a few pieces of differing styles present, but the piece you see pictured was my personal favorite.  You see a lot of action in this piece and she told me this work should be viewed more as process art than a representation of anything.  It basically expresses a certain inner state she was in when she completed the work.  You also see homage to Rauschenberg, the Abstract Expressionists and Russian Constructivism in this piece.  She explained that she did this work as an experiment since she is attracted to collage but had never felt confident enough about attempting it.  I like the use of the geometrical objects, implying order and reason and deductive logic, combined with the messy and uncontrollable elements representing what can’t be controlled through formal processes. 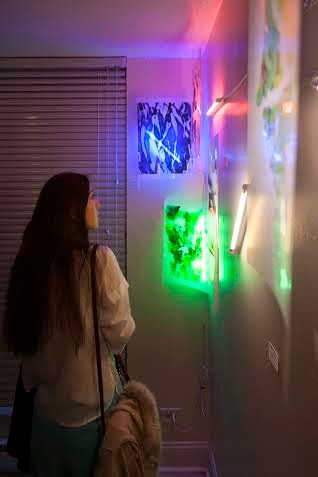 Xiaoyang Jin is a young experimental photographer who has a lot of theory behind his work, yet the work, on its own, is visually arresting.  In fact, what he showed at the Chaos show reminded me a bit of some of the work the experimental film-maker Stan Brakhage did with Super-8 film.  At one point Brakhage abandoned the concept of using film to narrate or represent and just scratched into the film stock itself with various sharp objects and then developed the film and ran it through a projector.  One then saw the colors from within the film stock itself come out randomly in brilliant abstract displays.  Like Brakhage, Jin uses a non-professional type of film – he uses the photographic film that was/is used in Polaroid instant cameras.  He literally takes the unused cassette of film and tears it open and then exposes the sheets of film to different types of sea water. 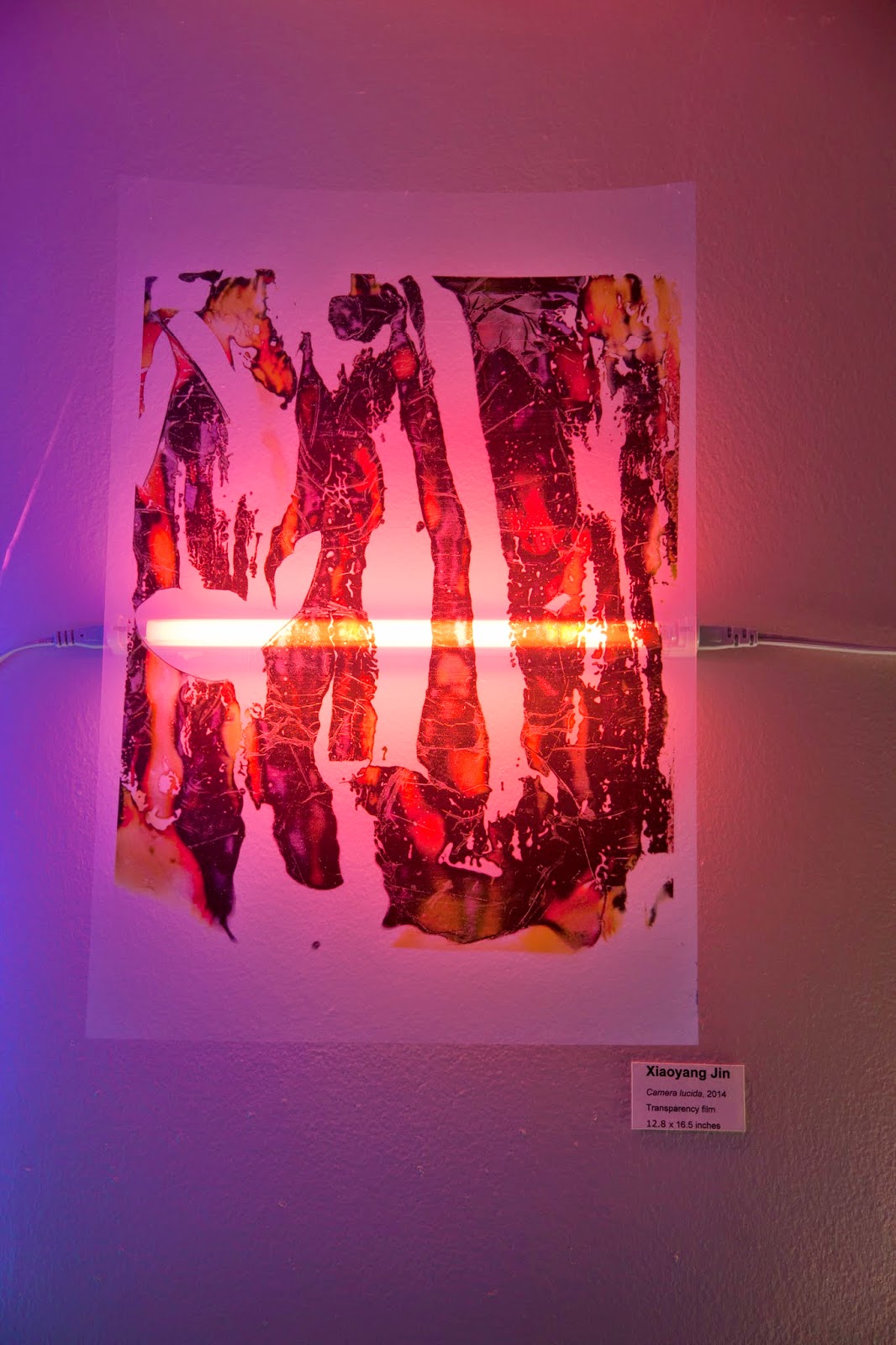 For instance, in one amazing piece he exposed the film to seawater from Coney Island and obtained a luscious and complex blue composition.  Jin then takes the results of exposing the film and mounts the image on a type of transparency.  This is important to Jin because ‘the screen’ on or through which we look at objects is an important aspect of his work. Here the screen not only reveals an image but is viewable and noticeable itself.  A thin fluorescent light is placed behind the transparency to reveal the abstract image. 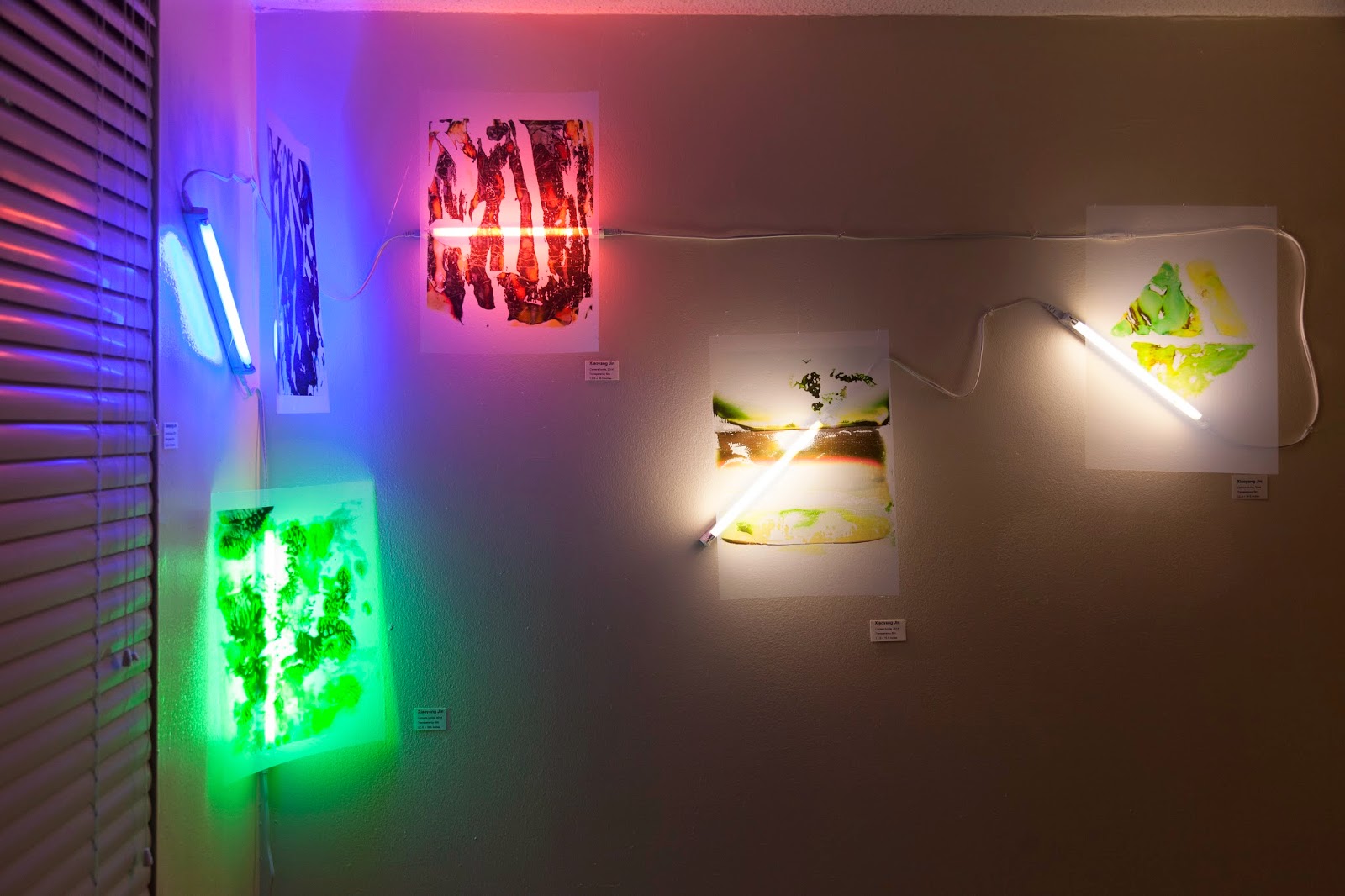 So he abandons the digital camera completely and goes back to the type of film that was commonly used by everyday folks to record their lives (in the pre-internet era) and extracts colors and designs from that film stock. He also explained that the chemical treatment is often the result of some type of physical journey and that the key to the meaning in the art is that the results are totally unpredictable and uncontrollable. The artist shows a type of faith in the process itself, that the process will produce a type of beauty and meaning what we can’t produce through our own efforts.
Posted by Daniel Gauss at 2:07 PM