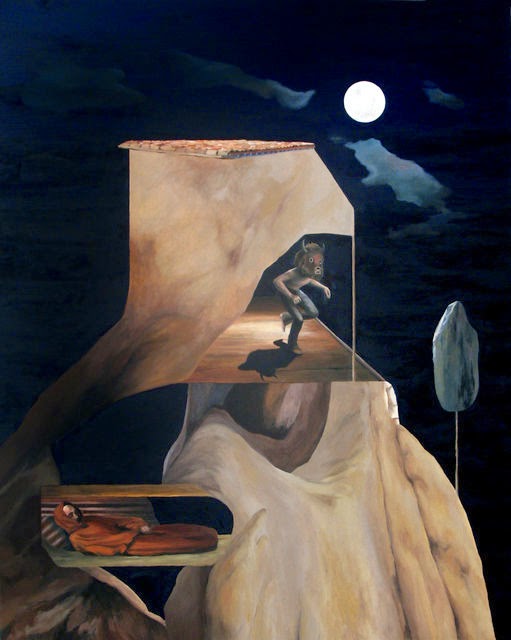 {{{Painting by Gwyn Joy - click on images to enlarge}}}

The abstract patterns that were often displayed among depictions of wild animals, in ancient cave art, had been a real mystery to anthropologists for generations. Then, one fine day, an anthropologist in Africa was allowed to drink a hallucinogenic drug while entering into a trance induced by chanting, drumming and dancing.  He soon realized that one aspect of his inner visions was a period of time in which he visualized the same types of abstract patterns he had seen in the famous caves in Europe dating back 30,000 years.  The patterns that had puzzled anthropologists had been painted by shamans who had witnessed them in trances. These shamans recorded these patterns seen in their inner journeys. So the origins of human art are not just found in paintings of bison or deer – some of the first paintings are recordings of alternative inner experiences. These alternative experiences form the origins of human religious experience and they have not necessarily been superseded by anything better.

The current show at Garis and Hahn is subtitled: “Shamanism, Meditation, Transcendence, Oblivion” and each artist contributes pieces referring to the tradition of religious experience based on techniques that alter one’s connection to the outer world to refocus on and change the inner world. 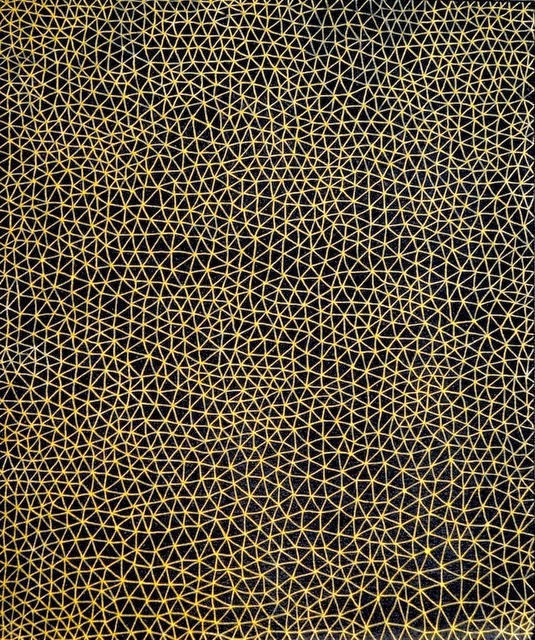 Phoebe Rathmell uses Seishin Toitsu meditation techniques to create her works.  This meditation technique allows calligraphers to make rapid and decisive moves to convey the nuances of a text. Fear or self-doubt will be readily revealed in calligraphy, and this technique, somehow, phases out anything that might hinder the production of an effectively crafted and beautiful piece.  Some samurai prized their skills as calligraphers as highly as swordsmen, since both activities seemed to derive from Seishin Toitsu. 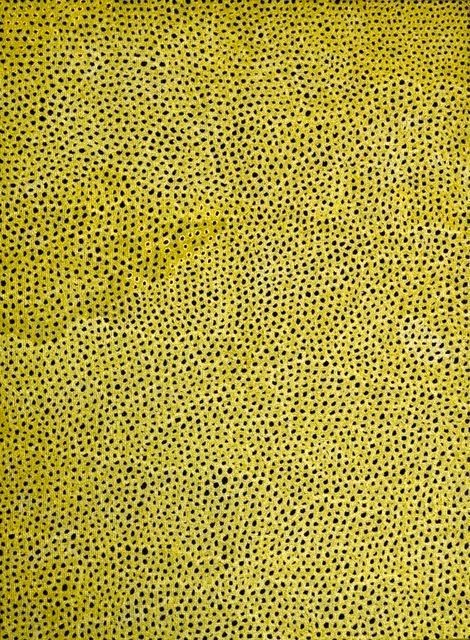 Practicing Seishin Toitsu seems to mean that you are focused on what might be called (to borrow from Paul Tillich) the eternal “now”.  In Rathmell’s pieces you see abstract designs produced through this meditative technique, which seem to be a record of her experiencing this eternal now. The pieces seemed to require intense precision and although each piece must have taken an immense amount of time, they are all comprised of seamless repetitive patterns.  It’s a type of process art which records the mental state required to produce the super detailed work. 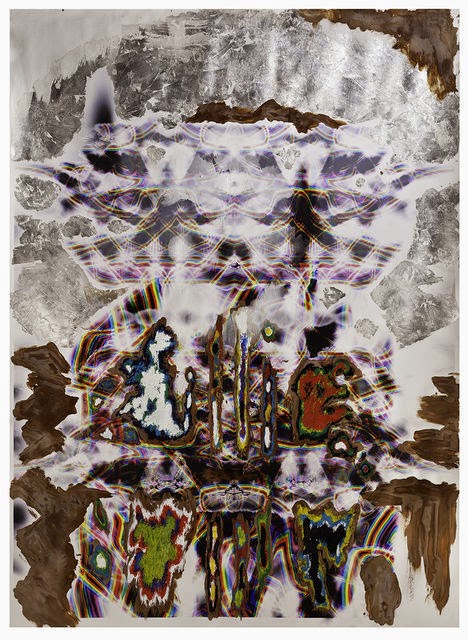 Michael Maxwell uses various techniques including ‘hypnosis, trance and meditation’ to also rise to a higher level of being and awareness.  Like ancient and contemporary shamans he is able to enter an altered state of consciousness and his multimedia works attempt to represent what he is able to perceive.  Maxwell also seems to seek out and embrace the concept of sacred land and incorporates this into his work.  Some of his pieces look like combinations of topographical maps and medical CAT scans. 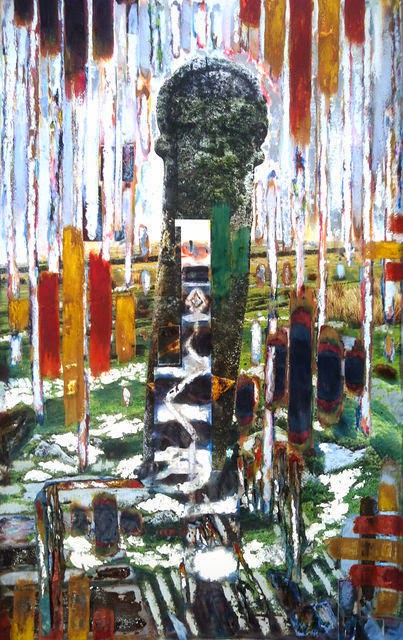 Perception perceives itself, loses its capacity for representational detail and gives way to transformative experiential innovation and change. 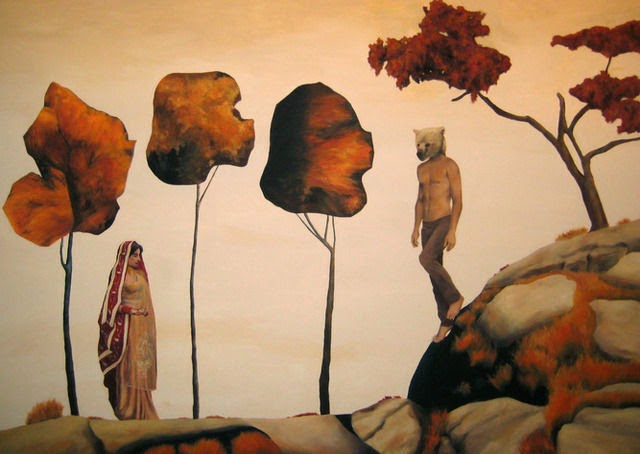 As human social experience changed, religious experience changed. Shamanism was, initially, the religion of hunter-gatherers and the earliest type of recorded religious activity. Gwyn Joy’s pieces are based on his experiences with the Tlingit Indian tribe, which still maintains the shamanic tradition. 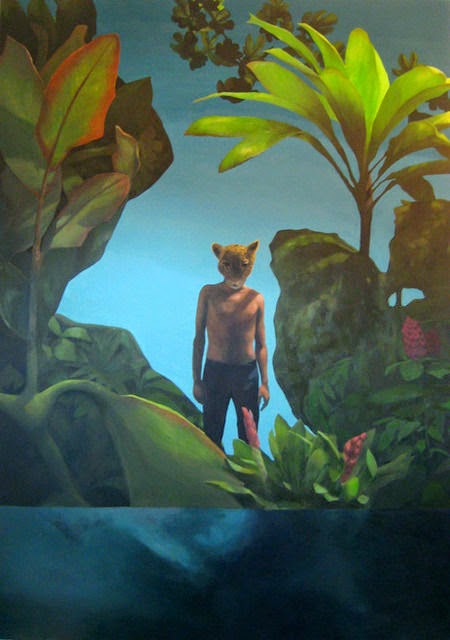 The purpose of shamanism is often to attain a trance-like state in order to travel into the spirit realm in order to gain help or assistance for ailing members of one’s society or one’s entire community itself.  Shamans also were able to use various characteristics of the animal world to aid in their spirit journeys and their battles in the spirit realm.  Joy presents many pieces apparently showing the shaman in the spirit realm incorporating the characteristics of a powerful animal in various types of adventures.

Sky Kim’s pieces reflect her belief in ‘cell memory’ which is also an ancient, pre-scientific concept. Cell memory is the belief that every cell of an organism contains the basic character of the entire organism.  In Kim’s pieces she repeats basic patterns to create organic-looking objects and seems to me to be investigating what might be potential emergent properties or stagnant properties of the complexly organic.  An emergent property is when something unexpected and new just pops up from older material or combinations. 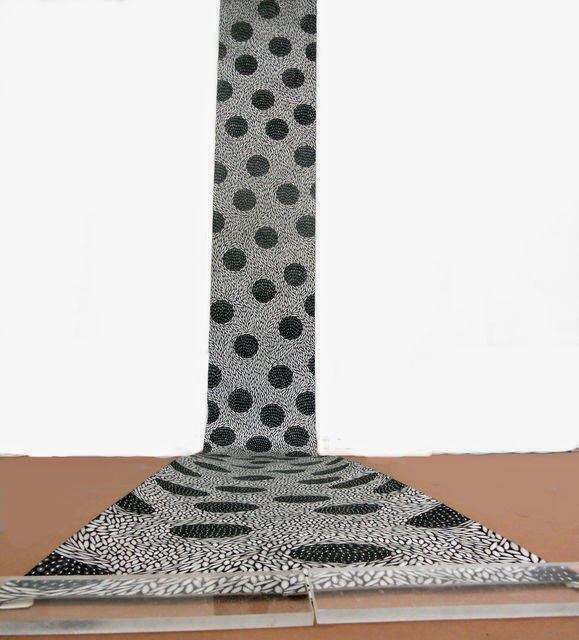 If you wait long enough and pack enough cells into a small area will the spiritual emerge?  Was Buddha right – do all organisms contain a Buddha nature? What emergent meta-biological potential is there in bundles or repetitions of cells? Kim also paints huge scrolls of repeating small spheres in circular patterns which have to remind one of Kusama. 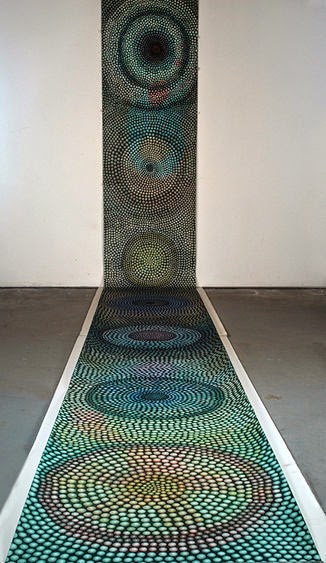 The ever-repeating patterns are a type of surrogate for the eternal. They become a type of idealized concept we can superimpose on a universe of decay and decomposition.

Finally, in the basement of the gallery is an installation piece by Joe Nanashe. Ladders are bundled together and turned upside down, pointing toward the ground.  The legs of the ladders point upward in a fan-like pattern.  Keyboards are stacked in squares and the room is filled with a static noise.  The entire area is lit up by a row of intense white light.  It’s as if we are witnessing the aftereffects of some spiritual catastrophe in which the right has become wrong and the wrong has become right.  The ladders should be pointing upward, the way basic symbols of spiritual evolution should be – ascending – and the keyboards should be accessible and producing pleasant music. Yet, maybe it’s better for the ladders to be turned toward the earth and for the room to be filled with discordant sounds (the type of sound that can induce a trance and not merely entertain) - as this was the origin of human religious inclinations.  Everything was geared to the earth and embracing a life committed to one’s community’s place in the natural environment was originally equated directly to the spiritual.
Posted by Daniel Gauss at 6:25 PM