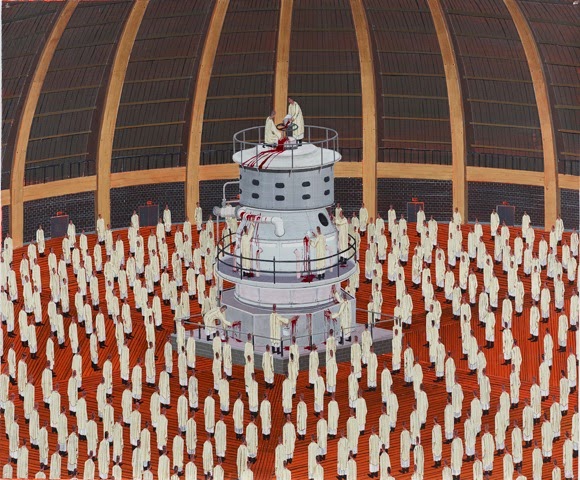 In 2012 an 82 year-old Roman Catholic nun and two male companions cut through three fences at the Y-12 nuclear weapons plant at Oak Ridge, Tennessee.  They then waltzed into the very center of the ‘most secure’ nuclear facility in America and conducted an anti-war/anti-nuclear ritual by writing peace slogans on the walls, throwing a little human blood on stuff, stringing up police crime scene tape, and then praying and singing for two full hours until guards at the ‘most secure’ nuclear facility in America were able to surround, capture and disarm (they took away the white roses and Bible the nun was carrying) these three elderly, pacifistic ‘saboteurs’.   The nun was sentenced to three years in jail while the guys were sentenced to five years each by a federal judge who never learned the basic humanity of tempering justice with mercy.

That’s the type of apparently futile but meaningful ritual that hearkens back to the good old days of the Berrigan Brothers of the 1960s. Indeed, my favorite anti-war ritual of the 60s was conducted by the high priest of Yippeedom, Mr. Abbie Hoffman, who, on October 21st 1967, among 70,000 anti-Vietnam War protesters, lead chants and songs by those circling the Pentagon. Their aim was to make the Pentagon float in the air and turn orange (every ritual has a goal). I’m sorry to say that the Pentagon did not turn orange.  I did hear that it floated approximately 14 feet in the air, spun around a couple of times, and landed as softly as a butterfly in exactly the same spot (OK, in reality, the Pentagon didn’t move).

All of the above musings were inspired by Ian Davis’ amazing painting Priests which is part of a show at Leslie Tonkonow Artworks + Projects.  In each piece Davis presents groups of men engaged in various types of ritualistic activities, but these don’t seem to be the sorts of activities my dad engaged in at the Loyal Order of the Moose.  There are rituals here that are so arcane and perplexing that the participants seem to be engaging in something so higher order as to not be understandable to the uninitiated.  So it’s fun to try to figure out exactly what might be going on in some of these paintings. 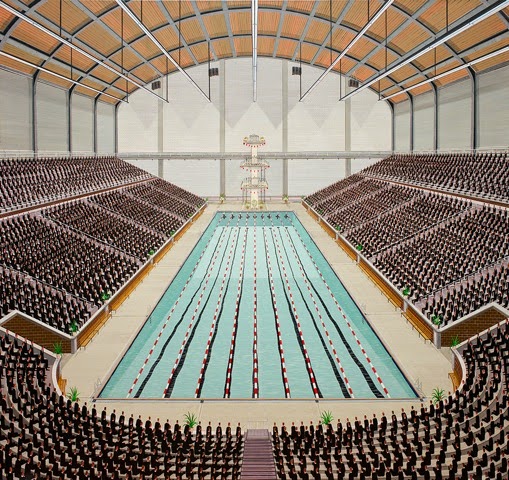 In Priests we see many men dressed in white robes who are pouring blood on some type of machinery. It could be some type of nuclear generating machine or it could just be your basic run of the mill factory machine.  Like the real-life activist rituals above, it’s a type of action which just highlights the futility and helplessness of the men to truly change something they feel is wrong.  It’s a meaningful, heartfelt gesture of huge symbolic significance, and no practical change.  So why do it? Well, it probably has to be done, what else is someone who opposes something that’s wrong supposed to do, sit and do nothing? It also highlights the ‘logic’ of magical rituals that Frazer wrote about in The Golden Bough – the core of any ritual is an approximation of what you want to see happen.  For instance, in some preindustrial societies people would dance and leap high in the air because they believed this would make the crops grow higher. So men in white pouring blood on a machine means, I guess, you want to see this machine bleed and die or become more human or take on more humane qualities (your guess is as good as mine!). 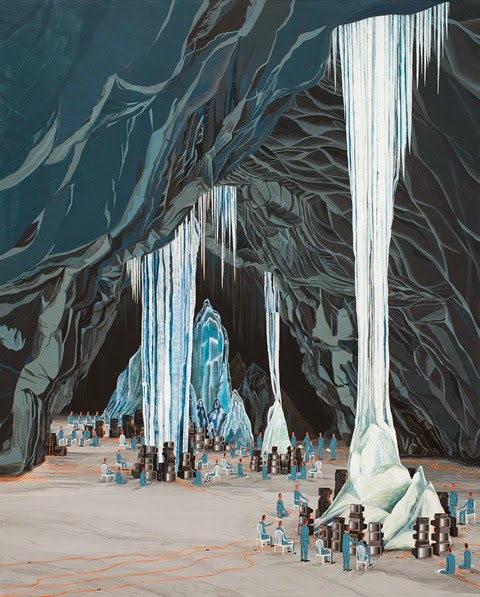 Broadcast is truly mindboggling.  You have hundreds of formally dressed men in a swimming arena.  On the diving platforms you have lots of microphones, as if several people might be speaking or singing at the same time.  There are also three levels to the platforms.  Will the swimming lanes be used after the speakers/singers?  Are the swimming lanes inconsequential to the event - they couldn’t get another venue with enough seats? Are the unused competitive swimming lanes a part of the ritual – as if this group has now foresworn competition altogether and is shooting for a higher-level of cooperative life?

Also, why men all the time in all these paintings?  Well, my guess is that gender has often been used symbolically in the past.  In allegorical literature the ‘masculine’ represents a type of ‘desire’ while the feminine seems to have represented a type of ‘fulfilment’.  These are all rituals involving just one half of the symbolic union of masculine and feminine – these are rituals involving the yang without the yin.

In Current Events Davis has NASA-like guys sitting in front of TVs in front of huge icy stalactites. Here there is the expectation of change, but no change is, obviously, going to occur.  But these guys believe that, maybe, just maybe, something big is going to happen soon among these stalactites and, you know what, part of me wants to join them.  I recall reading the old expression written on a wall in Paris in 1968, when the students of France engaged in their own futile ritual to overthrow the corrupt French government and radically change society for the better: “Be a realist. Expect the impossible!” These guys in this Davis painting are total realists.

I would highly encourage you to see all 11 of Davis’ paintings. They are quite imaginative and thought-provoking and can be kind of a Rorschach test since anyone could come up with his/her own interpretation as to what might be going on in each painting.