Artists of the WPA at Bill Hodges Gallery

At the height of the economic depression following the 1929 stock market crash, President Herbert Hoover gave a radio broadcast to uplift the spirits of America. He said that 25% of Americans were unemployed. People were hungry, some starving. Farmers were losing their farms to banks, people were living in dire poverty and as President of the USA, he could help…but he wasn’t going to. If he put food in the mouth of a starving person that person would become dependent on government handouts and Hoover would not allow the beautiful system of rugged American individuals taking care of themselves to go down the drain just because a few million people might die in the streets.

His message wasn’t very convincing nor uplifting and FDR became the next president. It’s debatable as to whether the New Deal pulled Americans out of the Depression, but it certainly stopped Americans from dying in the streets.  One of the more inspired initiatives of the Roosevelt administration during this period of time was the Works Progress Administration. One of the wonderful aspects of the WPA was that despite the undercurrent of racism and discrimination and lack of opportunities for African Americans in the USA at the time, many African American artists were given opportunities to create and make a living from their art through the WPA. 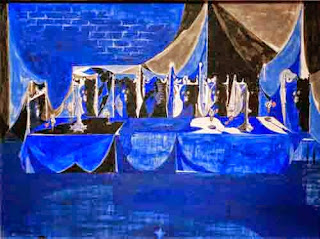 Bill Hodges brings together a group show of mostly African American artists who created for the WTA. Indeed, it’s an all-star cast and reinforces my steady claim that this gallery is a jewel in the crown of the Chelsea art scene, in what I consider to be the best building to see art in Chelsea – 529 W. 20th street.The show not only highlights the diversity of artists who benefitted from the WPA program, but it also helps to highlight the changes that each artist went through before, during and after the WPA  opportunity and how social change in America over the years either affected or didn’t affect the themes of individual artists and why. 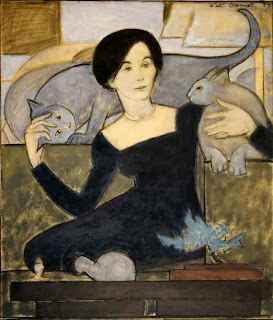 Will Barnet, for example, arrived in New York City during the Depression and was ‘radicalized’ by the experience. He began with a style and content based on social realism and later dabbled with various other approaches including “Indian Space” painting, a type of abstraction based on Native American art, using organic shapes and lacking any semblance of perspective. The painting here is titled Martha and Two Cats and displays a style far from his social realism days. The two cats could be, I am guessing, of the “Russian Blue” breed – a hyper intelligent type of cat which is very shy around strangers, or maybe of the “Chartreux” breed - an ancient breed from France perhaps brought to Europe from the Crusades. The cats become symbols of status and comfort through their exoticism and plumpness. If Barnet had painted something like this in the 30s, however, it might have been perceived as social satire or criticism of the leisured, privileged class. But in the mid-80s enough social safety and welfare programs had been created to the point that even the poor seemed to have nice stuff in America and an ideology of upward mobility had trickled down throughout all classes. An artist did not need to worry about portraying the wealthy in his work in a negative light. “Wealth,” in itself, was not necessarily to be condemned in that decade of Reaganomics as it might have been during the FDR years. 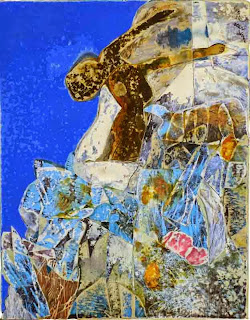 You may not know that Romare Bearden had a degree in education and worked for the City of New York as a social worker. In fact, many African American artists in the first chunk of the 20th Century had jobs in helping professions out of necessity, since it was so difficult for their work to be sold. Bearden was committed to his community on many different levels and his daily engagement with the social life around him added immense depth to his work. Under the Waterfall is another of Bearden’s famous collage (montage) works. Many of Bearden’s collages present ‘archetypal’ human forms in his attempt to equate the African American experience to larger themes in world culture and mythology. In this piece we see a figure bent backwards through the force of the water pounding onto him/her. The body is not in flight, but in a position to absorb the experience in what one might interpret as a deliberate attempt to engage the adverse aspects of the world directly in hopes of a greater insight into how one may live in and change these aspects of the world. The fragmented background adds to the feeling of a piercing, excruciating experience with the body at the limit of endurance in an almost shamanic ritual of enduring pain to gain visions. 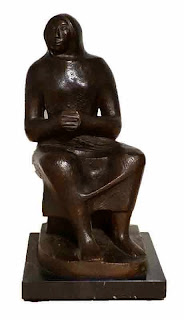 Elizabeth Catlett overtly used her art as a way to express her social awareness and to protest what she could clearly see to be wrong in her society. She not only protested through art but was arrested periodically for her participation in literal protests. Indeed, in 1946 the US government accorded her a type of honor, perhaps, by declaring her an ‘undesirable alien’ while she was in Mexico and she was prevented from entering her homeland for a decade.  Before that she had experienced various forms of discrimination such as an acceptance to a university followed by a revocation upon the discovery of her race and the inability to live in a campus dorm at another university for the same reason.  Despite the irrational hatred directed against her, however, her art always seems to be a positive statement. The piece Rebozo refers to a traditional Mexican garment worn by women of the working class or women from rural villages. The rebozo served various functions – for instance one could use it to carry objects or to carry a baby. Frida Kahlo painted herself in a rebozo to represent her solidarity with the working women of Mexico.  In this piece we see a woman in a rebozo who could be engaged in prayer or her folded tense hands can be a sign of concern – the implication to me is that she is offering a prayer for better conditions in general brought about through her own experience of pain. 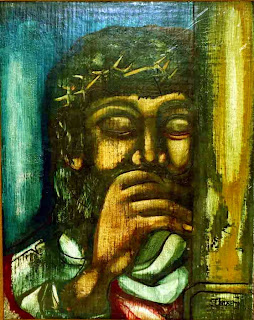 In the work by Charles Sebree that we see here, we can see how African Americans were open to influences from Europe and how these influences were appropriated to reflect American themes. When I saw this Christ with Thorns, Rouault immediately came to mind, but this seems to be a softer rendering than Rouault was used to doing. Furthermore, this is a Jesus who does not betray the sometimes mawkish expressions of some of Rouault’s work as this Jesus does not suffer physical pain and is almost like an icon of a darker skinned Jesus. The implication could be that the African American experience in America has been, to a great extent, “messianic” and long-suffering. There is a hope implied that the suffering will be redemptive and that the African American community may be more capable of initiating positive change due to its horrific experiences and that greater humanity may someday envelope this country through a greater acceptance of the African American people and their insights. This a patient and serene Jesus who has faith that humanity will ultimately prevail.