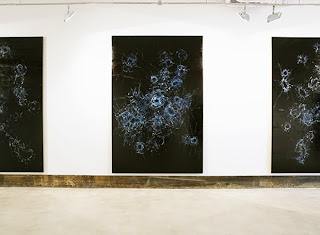 The term highbrow isn’t used much anymore but the term used to indicate someone of immense intelligence with the highest cultural standards. The English novelist Alan Patrick Herbert once quipped, “A highbrow is the type of person who looks at a sausage and thinks of Picasso.” Zhao Zhao, a Chinese artist from Beijing, does something even more impressively imaginative than deriving Picasso from a sausage: after an auto accident in which his head slammed into his windshield, he was amazed by the patterns of cracked glass emanating from the point of impact. Indeed, this led to his series of hyper-realistic paintings called “Constellations” based on bullet impacts into panes of shatter-proof glass (which reminded the artist of interstellar galaxies). 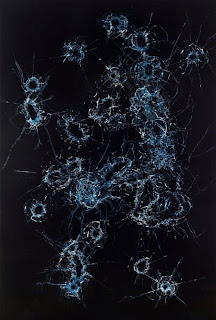 Some folks interpret Zhao’s work in political terms. So in this case, in Zhao’s work, glass can represent something restrictive – as in a glass ceiling or a form of transparency working, in reality, as a means to inhibit movement or progress to an area perceived but inaccessible. The bullet holes help to show the power, strength and resilience of this transparent or invisible force. Even riddled with bullet holes the glass remains intact. Repeated, forceful, aggressive and even violent effort is often fruitless to eliminate the types of resistance (an outward political/social/economic resistance or perhaps an inner psychological resistance) that the glass can represent. The artist therefore might seem to question the efficacy of violence or aggression as a means of removing obstacles, calling for a more creative, clever and pacifistic/humane approach. 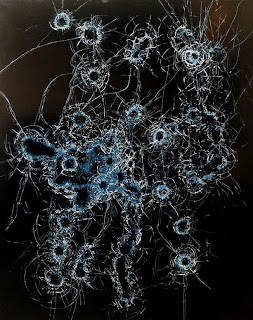 One could also say that until an act of force is directed at glass, the existence of the material is not readily perceived. So, thinking in political terms that apply to contemporary America, most of us did not perceive what now appears to have been a lingering and festering problem with inner city police departments and inner city residents. This problem was, to a certain extent, transparent or invisible to American society given the lack of real journalism in America. It took violence in Ferguson and Baltimore and aggression against the force of police corruption and governmental apathy to make the nature of this ‘window’ apparent. And, even with numerous impacts into this window, we still hear of police abuse around the country regularly. 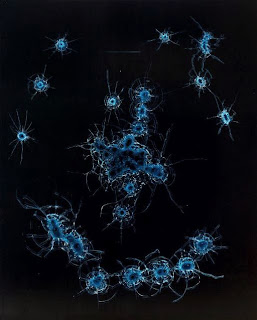 To me the bullet impacts represent a type of helplessness we can feel ex post facto in regard to our more aggressive or violent emotions. Aggression ‘naturally’ follows a sense of frustration or pain. The psychologist Leonard Berkowitz showed that people who are in physical pain are much more likely to react violently to even slightly irritable situations. Given frustration or pain we are predisposed to act aggressively and it is very difficult, if not impossible, to get rid of this type of response system. Looking at the bullet holes is like looking at the results of our anger and outrage after the fact, regretting that we could not prevent our actions, hoping in the future greater restraint or an ability to overcome this ‘natural’ type of response might be possible. 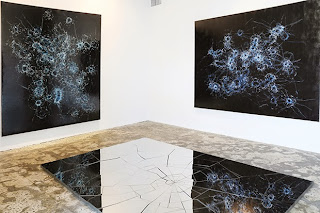 Finally, I love the idea of the artist shooting bullets into glass to create constellations of star clusters or whatever astronomers call that stuff. It recalls the pessimism of the Gnostics or Manicheans who viewed the universe as something created by an evil god and dropped into the lap of a good god. We live in a universe of decay and competition for survival. According to astronomers the universe resulted from a ‘bang’ leading to a violent and uncontrollable expansion which will be infinite even after all energy in the system is expended. Theology tells us the universe was created by a good god for a purpose – but what if the universe was a horrible mistake and we, as the Gnostics believed, are prisoners of and in this universe and, indeed, in our own bodies? Glass then represents a flawless system of perfection corrupted through violence into a creative form, generating a universe dominated by the Second Law of Thermodynamics in lieu of an orderly Newtonian watch-maker.

Everybody seems to be going to the Kusama “Obliteration Room” on 19th street. Drop by Chambers before hand – it’s right across the street. It would be a shame to miss Zhao Zhao’s amazing show (and the Obliteration Room kind of sucks anyway - to tell you the truth - although Kusama’s paintings are worth seeing).