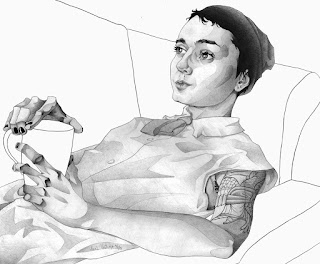 According to Robert Bellah’s book ‘Religion in Human Evolution’, biologists sometimes enjoy using the computer terms of ‘online’ and ‘offline’. When some organism or person is ‘online’ he/she is engaged in the processes required for survival – hunting, foraging, working etc. When one is ‘offline’ one is in the lounging around stage. Yet, I’m not so sure there’s a hard and fast line between these states for human beings. I was just at my laundromat – was I online or offline waiting for my stuff to dry while chatting with neighbors? If we are reading a challenging book or riding on the subway while engaged in meaningful thought, are we offline? Maybe the perfect life is one where online and offline are perfectly integrated so that you are always a bit online and always a bit offline.  Who knows!? 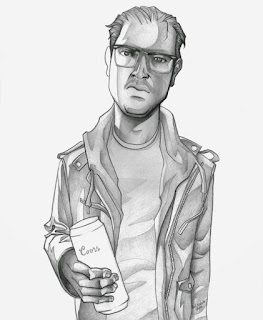 Axel Ventura seemed to play with this notion of the offline state in his series of drawings “I once lived in a two-story house.” which was a highlight for me of the Bushwick Open Studios event.  Assuming there is such a thing as living offline, it seems to be our most desired state and we see young folks in this temporary state of being in Ventura’s drawings. They are in the state where we are the most benign to the world and others and where pressures can be suspended for a while. What happens or can happen when we are in this zone? What do we need or crave in this state?  From three drawings in the series we can see one guy needed a Coors (although he seems a little irritated – maybe he wanted a Corona but only a Coors was left?), another was hoping for one last slice of hopefully not so moldy pizza and another is going to try to catch some shut-eye.  Ventura captures, with a subtle humor, the contented state where, basically, youthful people are not trying to do anything nor do they feel compelled to do anything. Time is on their side. 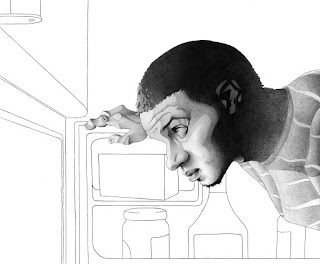 I also liked some paintings by Ventura which were obviously based on the tradition of 20th century muralism. We see two images here of very muscular figures who are compressed within the frame of their paintings. So my first interpretation is that these are muscular guys – immensely powerful – who are being subjected to some form of oppression represented by the frame. The oppression must be extreme since, as I pointed out, these guys are pretty darn brawny but are still stuck in contorted positions between the borders. So the paintings could work as a statement on the nature of oppression and how effectively and often inexplicably oppression can bottle up even enormous strength. The positive conclusion to be drawn might be that such immense strength will, of necessity, be harnessed sooner or later for liberation. 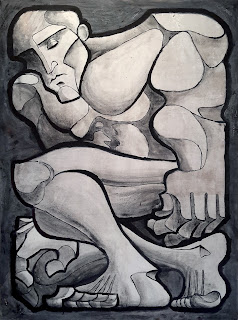 My second interpretation would be that Ventura is making a broader statement about the visual arts. By its very nature art constricts life, which can give certain pieces of art a type of explosive potential energy. So, according to my second interpretation, the contorted figures represent the pith or raw force of the most worthwhile meaning an artist might shoot for. In the process of attempting to capture and convey that meaning, it is placed in a restrictive ‘frame’. Thus, we get the muscular guys waiting to be liberated or liberate themselves from a narrow structure established by the artistic process itself. It could be that Ventura is asking the question: Is it possible for the artist to really convey something transformational and to reach others with something amazing or is this type of communication impossible, with the inner truth the artist perceived always locked within the frame of the canvas and the very pigments and ingredients of the paint itself? 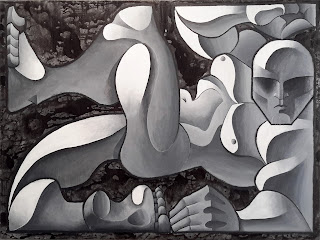