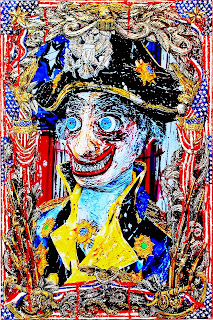 So Gilbert Stuart painted the iconic portrait of George Washington we can see at the National Portrait Gallery. And Washington deserved a nice big portrait, didn’t he? After all, he beat the English so that we could gain our freedom and he served as first president. Yet, a reputable historian has suggested that George Washington may have supported the American Revolution primarily because he had horribly mismanaged his finances in regard to his tobacco plantation and was hopelessly in debt to English businessmen – nothing like booting the debt-holder’s army off the continent to relieve your financial crisis. 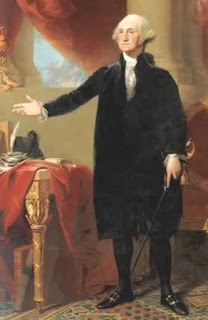 Furthermore, George’s generaling skills were not always what you’d have hoped for. In a battle in Manhattan he stupidly allowed about half of his army to get captured and these men languished and died slowly and agonizingly in English prison ships (you can visit their monument in Fort Greene Park). For big chunks of the war he, basically, did nothing but maintain a camp. At the Battle of Yorktown – the final battle of the war – it was the thousands of French soldiers and the French navy which made the difference, and Washington was not even allowed to create the strategy for the battle since the French king did not trust him with such a large chunk of the French military. Basically King Louis said, “We’ll let you be there George, but we’re running this show, baby. We’ll do the work, you take the freaking glory.” 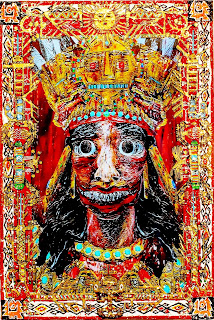 So this lionizing process of first obfuscating mediocrity and then elevating the mediocre and greedy and power-hungry is what Federico Solmi seems to lampoon in his visually stunning animated paintings which were one of the highlights of the Bushwick Open Studios.  Solmi will be having a show in LA at the Luis de Jesus Gallery in which three of the works he showed in Bushwick will be displayed as part of a new series called The Brotherhood. The ‘Brotherhood’ is an organization which has been comprised of ‘leaders’ of now mythic proportions (and future ‘leaders’ of mythic proportions) who have had the goal of maintaining ‘chaos in the world’ while working toward ‘the degeneration of the human race’.  The three members of the Brotherhood that will be shown in LA are Montezuma, Washington and Columbus. In these ‘animated’ paintings, you see figures attempting to move with grace and decorum through public areas to receive adulation, but something seems horribly wrong. 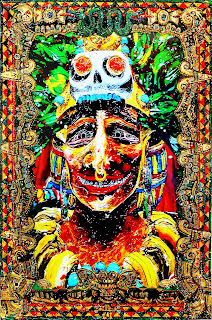 These animated paintings are like Dorian Gray images where the truth of each exalted and grandiose person suddenly winds up making it to the forefront even though the public image will remain pristine and unchangeably perfect and magnificent due to the lack of real journalism and the existence of public apathy. Solmi seems to attack the false narratives that get written about most leaders – that they are driven by integrity, concern and compassion, when, in reality, each one is driven by an all-consuming desire for power, fame and money. Each of the members of the Brotherhood has mastered the art of demagoguery and rhetoric and will say (perhaps from a teleprompter) what people want to hear while pursuing his/her own agenda.

Solmi is a past winner of a Guggenheim Fellowship and has been exhibited widely. There will be a gallery show of his work in New York at Postmasters Gallery on 54 Franklin Street on September 9th.  Join him on Facebook and he’ll let you know the details. You should be able to access one or two of Solmi’s non-Brotherhood pieces below, to give you an idea of how he uses technology from the video-game industry, as well as more traditional materials, to create these large, framed video pieces.

Daniel Gauss - a guy who is pretty damn good at writing about art :) 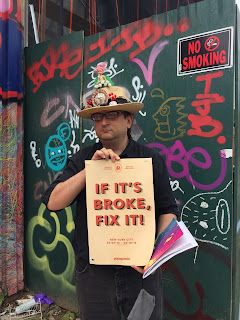