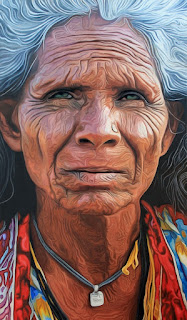 One of the highlights for me of this year’s Buskwick Open Studios was finding the work of Erik Maniscalco. Maniscalco seems to be drawn to those he meets in his travels who have endured extreme hardship, or who are enduring extreme hardship, but who solicit no pity and who are not so much resigned to their rough lives as they are determined not to give in to self-pity or hopelessness due to their conditions. Maniscalco makes a strong statement about human endurance and dignity in his work. Some of his subjects are Job-like figures, some of whom may be suffering unjustly, but who have maintained their humanity despite everything.  Even without the hope for anything changing in their lives, they have maintained and will maintain their humanity.

Maniscalco met the subject of his painting ‘Kushali’ in a little village in India: she was a highly-respected village elder.  In the portrait we can see, perhaps, inner suffering from what she has experienced, seen and heard, but also insight and determination. She is the person others went to for advice in regard to various problems or conflicts and she has the look that you see in some historical photos of shamans who are connected to both the lives of their communities and the spirit realm. In Buddhism there is a Goddess of Mercy, who is always depicted as youthful, beautiful and serene. Kushali seems like more of what a Goddess of Mercy should look like with her appearance of intense concern and compassion and perhaps a measure of unspoken condemnation.

When I asked Maniscalco why he painted her portrait with swirling lines, he told me that he wanted to paint her with some tree-like qualities. In many non-industrial cultures the tree is a sacred object, a type of bridge between the earth and the sky or between the lower and higher. 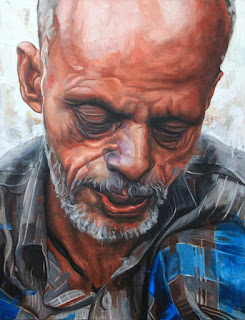 Also quite affecting is Maniscalco’s painting of ‘Roka’. He found Roka in an Indian city sitting cross-legged on the street breaking larger rocks into smaller ones for a living. The painting doesn’t show the tedious and difficult activity Roka is engaged in, it focuses on his facial expression while he is consumed in this activity. We don’t know the social or economic circumstances which lead a man to have to turn to this grueling daily labor, but we see he has reached a stage where this is somehow bearable and we get the sense that he will continue to endure in this manner for some time. 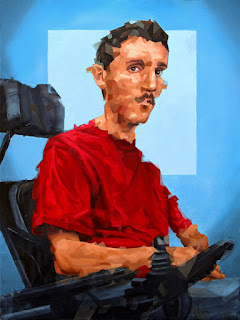 In the work ‘Florian’, we see a young man with a rare bone and joint disorder sitting in his mechanized wheel-chair. Apparently because Florian’s joints tend to fuse solidly, doctors are forced to literally break the joints apart periodically in a medical operation. Maniscalco paints this image in a somewhat broken or fragmented manner to reference the horrific medical procedure Florian has to periodically endure. Florian looks from the canvas in a matter of fact manner, living in the here and now and apparently not preoccupied with his condition of the medical procedures he has to continually endure. 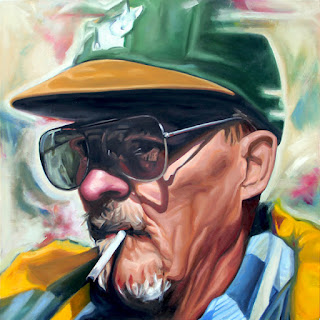 Another painting I liked a great deal was ‘Fred’. No that’s not an Oakland A’s hat he’s wearing. Actually the hat is from some type of beloved dog organization he belonged to. I don’t know Fred’s background, but through Maniscalco’s painting I think I can recognize the type of guy.  He reminds me a bit of photos of Sam Peckinpah – and we get a guy ostensibly gruff and maybe a little coarse softened by his love for dogs and the subtle look of self-understanding, remorse and even kindness in his eyes. He looks as if he’s a funny guy and maybe an original Pabst Blue Ribbon drinker from the days of yore.

Maniscalco’s paintings are filled with a deep sense of humanity and a love for others that is often lacking in hyper-realistic paintings, where the subject of the painting is often distanced from the viewer and in some type of social context. I think it takes a certain amount of courage to do work like this when it is easier and more lucrative to delve in cynicism, satire and irony. Here Maniscalco often removes his subjects from their social context, which gives the emotional engagement with the subject greater power, yet we are also compelled to imagine or guess the social and economic contexts that engendered the lasting impressions on each subject’s face and in so doing we are gently nudged into a condemnation of those factors which cause human suffering. So these paintings are not an indictment of any social ills, yet by isolating the subjects from their context we are directly and forcefully engaged with the emotional pain of their suffering and are challenged to identify the social ills causing it. We live in a world where at least 1.2 billion people are still living in abject poverty and most of these folks can’t reach us with their calls for help. Portraits of such deep humanity by Maniscalco help us to connect to others, who, like ourselves, might be suffering and his work makes us aware that there is much more work to be done to end corruption and injustice in the world.