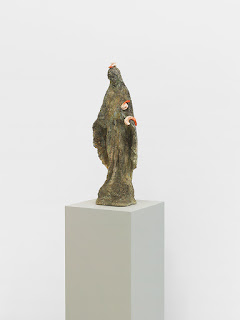 In world mythology the trickster figure is usually really good at giving horrible advice. The irony is that the trickster is usually not trying to sow discord or wreak havoc in people’s lives, he is sincere but misguided. So the trickster has gotten a bad rap – he’s not a ‘trickster’- he is not malicious, he’s just very sure of himself but wrong.  I’m convinced that the serpent in the Garden of Eden story is such a trickster figure and everything he promised to Adam and Eve was something he really believed in. He thought he was doing them a favor by passing on the knowledge of good and evil and really expected his counsel to lead to amazing results. The serpent can represent our own inner capacity to falsely assume impossible results or to, basically, use our intelligence to cheat and cut corners in our spiritual or humane development instead of doing the right thing. 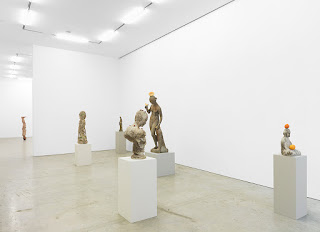 In his show Garden at Marlborough Chelsea, Tony Matelli presents two upside-down, naked human figures in painted cast silicone. Given that the show is called Garden and the story of the Garden is that of the fall of humanity due to a lack of discernment in judging between what’s good and bad spiritual advice, I’m assuming these figures represent the effects of listening to the serpent, namely the loss of grace in exchange for greater self-consciousness. These two folks have been rendered incapable of effective action and find themselves in an absurd condition searching for a solution to right themselves. We see, as Heinrich von Kleist put it in his brilliant essay “On the Marionette Theater”, “…the disorder that self-consciousness imposes on the natural grace of the human being.”  Kleist’s prediction: “As we look in a concave mirror, the image vanishes into infinity and appears again close before us. Just in this way, after self-consciousness has, so to speak, passed through infinity, the quality of grace will reappear.”  Between these two figures Matelli has a levitating green day-glo rope sculpture of silicone that seems to represent the serpent. It’s as if the rope doesn’t work the way it’s supposed to either given the initial choice we made and the life of toil and conflict which followed.

Matelli also has various types of garden religious statuary or statues from the classical era subjected to a sandblaster, each statue serving as a stand to hold various types of cast bronze renditions of food – there’s shrimp on the Virgin Mary for instance. I think I saw a Buddha with oranges. What does this mean? This statuary promises greater meaning than the vision of the world Schopenhauer, for instance, provided, where we are stripped down to the basics of pure biological survival and everything else is supposedly illusory. So we can say there is a contrast between the statues and the food – one is relatively permanent and makes a promise of meaning (like the serpent?) while the other is absolutely essential to the natural survival of our beings and may cast the relevance of the statues in doubt. Or perhaps the food represents a type of naturally spiritual (I hope that’s not an oxymoron) sustenance like that promised from the Tree of Life, while the statues are the dead, stone echoes of that which was originally offered to us by God in the garden. The statues, perhaps, represent our clearer perception of the serpent’s bad advice once the quality of grace reappears. 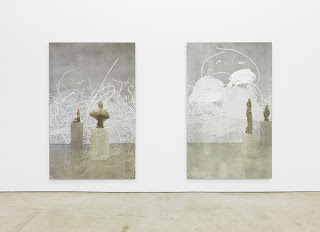