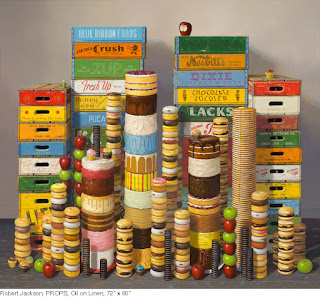 Gallery Henoch is one of the premier galleries, if not THE premier gallery, in New York City, for super-realism. It has another one of its amazing group shows up these days until June 20th and it should not be missed. Some folks have a misconception about super-realism and believe that super-realist artists are only interested in capturing something they perceive in the world on canvas. Henoch continually disabuses this misconception and in its current show we can see how flexible and diverse the technique of super-realism can be. Robert C. Jackson’s piece was especially spectacular to me for its creativity and wit.

In fact, I wanted to highlight the piece above by Jackson because after looking at the painting for a while and chatting about it with a friend, we finally felt we had discovered ‘the hidden meaning’ of the painting and we were impressed by the cleverness and execution of Jackson. He actually seems to be conveying a traditional theme found throughout the history of art in a brilliantly light-hearted and humorous manner. 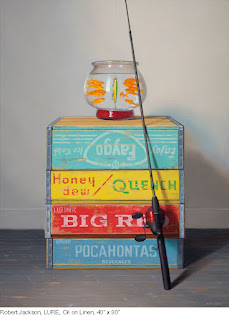 So we see that Jackson has painted stacks of burgers, pancakes, doughnuts, cakes, oreo cookies etc. When my acquaintance (sarcastically?) asked me whether I felt each oreo cookie in the painting had a specific meaning, I had an ‘a-ha’ moment. Au contraire mon frere – each consumable item probably does not have its own meaning but collectively Jackson seems to be portraying objects that provoke desire. I think one aspect of the piece is to invite the viewer to examine what exactly ‘desire’ is comprised of. And if we introspect a little it seems that desire is comprised of a somewhat intense feeling of inner pain that grows more intense the longer we want something. When we want something, we are goaded through the pain we call desire to an aggressive act purely designed to stop us from suffering and, secondly, to derive whatever pleasure the actual acquisition of the object of desire provides. 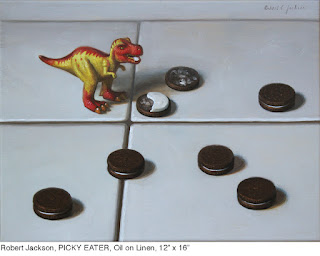 So what about the apple on top of all the objects of desire? Why are there two bite marks? Why was the apple left after just two bites? Well, it took us a couple minutes to get this one, but our guess was that this is the apple from the Garden of Eden after Adam and Eve bit into it. So Jackson seems to be hilariously portraying (or parodying) the fall of humanity in this piece. There is no snake in the painting because, perhaps, in the story of the fall the snake represents a type of desire for unnecessary things that goads us into aggressive action that becomes harmful to ourselves and the planet.  Good interpretation? Bad interpretation? So all the goodies portrayed – the burgers, pancakes etc. – can either represent the garden or the goodies promised by the snake. I tend to think they represent the goodies promised by the snake – an overabundance of goodies if you just cave into your desire and indulge.

Also, Jackson likes to use oreos a lot in his work. Is this a reference to the famous psychological experiment where small children were challenged not to eat an oreo cookie for 15 minutes under the promise that they would receive more oreos later if they could show restraint? 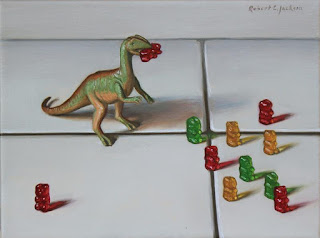 My interpretations might be dead wrong and Jackson might be reading this right now saying, “What kind of stupid take on my art is this!?” That’s OK, I’m a risk-taker. We’re also including some other images of Jackson’s work so you can see whether there are some common themes in his work. I especially like the T-Rex toy poised to gobble up the oreos. In one piece by Jackson from the past he had a toy dinosaur with a gummy bear in its mouth. It’s as if Jackson is saying that this huge aspect of our lives – desire – even subconsciously underlies children’s games but it is largely ignored and rarely investigated.