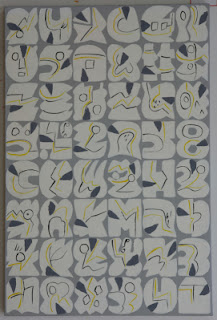 Hwang Young-Sung was born in the early 1940s in Korea and, consequently, suffered through part of the Japanese occupation and the entire Korean War - during which he became an orphan. He was born in Gwangju, in the province that engendered South Korea’s Nobel Peace Prize winning president Kim Dae-Jung, who seemed to embody that region’s spirit of strength, democracy and independence. Indeed, Gwangju was where the military dictator Chun Doo-Hwon massacred student protesters on May 18, 1980 – a protest Hwang participated in. He suffered through the dark days of occupation, war and extreme poverty (after the Korean War South Korea was one of the poorest nations on the planet) and survived through the days of brutal dictators to see a more democratic government in his homeland. He is currently the Director of the Gwangju Museum of Art and Emeritus Professor of Art at Chosun Unversity. Although admirably committed to his people and country, his work transcends any type of regional classification and embodies international influences from various eras.

At Shchukin the show focuses on his work from the 90s onward and this work might be best classified as being ‘semiotic’ in nature.  As you can see from the images presented, Hwang seems to create what might be called pictograms in large grid patterns. Some pictograms are recognizable objects, numbers or animals but we don’t know whether each pictogram represents a sound, the object presented or a concept related to or potentially unrelated to the image. Different pictograms could even serve different functions hypothetically. We don’t even know in which direction the text should be read from. So the first question would seem to be: what does it mean to be confronted by an indecipherable language? 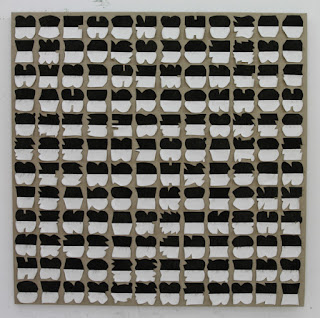 First, obviously, when we see text we want to know what it means. Someone is presenting something for us to learn something from and we feel a sense of frustration from inaccessible information locked in foreign characters. Frustration normally leads to aggression. Yesterday when entering my neighborhood Chinese take-out place, I stepped on a mat that had four Chinese characters on it. It bugged me that I had no idea what the characters meant – they could have meant, “Welcome!” “Please die! We hate working here.” “Your amygdala in the limbic system of your brain is the seat of the aggression you feel now.” “The meaning of life is blah blah blah…” “Our food sucks ha ha you sucker.” – anything. So looking at Hwang’s indecipherable grids we can feel a sense of inner pain and aggression due to the frustration and ambiguity that comes from an inability to read text we believe might be meaningful. We feel a sense of desire to know what is, basically, unreachable and are left helpless. 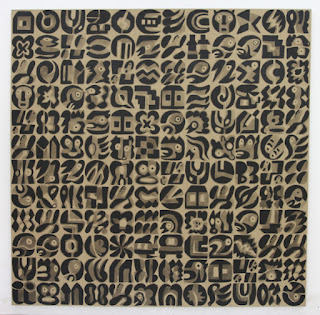 Hwang’s pieces also force us to think of what, basically, language can and cannot convey – just how important might the content be of any indecipherable language that we can’t get? What’s the most meaningful content that can possibly be stored in symbols and to what extent can it change those of us who read it? A Meso-American researcher worked months to decipher a text and was shocked to find that the beginning said: “This text contains everything you need to know to live well and to fully understand the universe.” Upon taking another month to decipher the rest of the text, he realized it was nothing but a child’s math-lesson text from 1,000 years ago. Maybe we expect too much from textual material – maybe text is not sufficient to provide us with all the insights we need to develop into the most humane beings possible so that we can live meaningfully in relation to each other, our society and the planet. Maybe we need to reject text and the word at some point and dive deep inside ourselves and surrender to learning and change through experience to supplement what can be spelled out for us.

Also, when language was created, when symbols were created (first sounds and then images) they must have been created to represent actual physical stuff in the world. If you think about it, any language we might use for processes in our inner world is always metaphorical. Even the term ‘emotion’ comes from the Old French term ‘emouvoir’ which means ‘to stir up something’. So when we think about stuff that goes on inside of us (motives, emotions, desire, thought-processes) we use objects taken from the outer world as markers to understand and express what is happening. If we feel frustrated we imagine an actual physical obstacle, a sense of emotional liberation can be described using a metaphor like a soaring bird or some obstacle being removed. We have no language for our inner reality – our language symbols double for the outer and inner worlds. We use objects and relationships between objects to also describe inner states or situations. 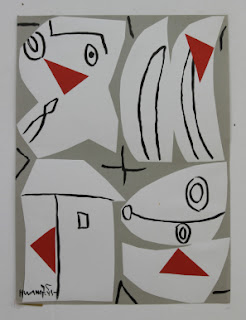 Many of the pictographs in Hwang’s pieces seem to be shapes with mirror images, one half a darker color and the other half a lighter color. Could he be pointing at this dual aspect of language – that language can represent outer and inner states using the same signs? Many of the signs also contain darker and lighter elements – again, does this point to the dual nature of language? Darker and lighter can imply ‘active’ and ‘passive’ or ‘desire’ and ‘fulfillment’. In the more abstract pictograms each symbol possibly derives its meaning by the proportion of active and passive or light and dark in the piece. The objects which can be recognized, furthermore, show how symbols can serve as markers for inner reality. So we see a snake – what is it about the snake that gives it possible meaning for our inner reality? The snake in the Garden of Eden story seemed to symbolize a desire for something more than God had made available to us. Why was the snake used this way in various types of sacred literature? The snake has no arms/legs and so in the ancient world this meant the snake had no creative capacity and had to steal everything it needed. So the image of the snake becomes one of spiritual thief, an inner desire to take what really isn’t ours.

Another key to understanding Hwang’s work also seems to be that he seems to lament the loss of traditional rural culture in modern Korean history. Some writers have seen references to ancient Korean images that represent guardian figures of villages as well as references to other aspects of Korean traditional life. The predominance of animal shapes also hearkens back to a pre-industrial Korea which was unified and peaceful. I even caught images of the number 38 in some of his paintings, which would obviously refer to the 38th parallel – the dividing line of contemporary Korea.

Gallery Shchukin has been around for about a year now in NY City and Arte Fuse was the first arts source to review one of the shows at this new and remarkable cultural resource. Shchukin has contributed greatly to the NY Arts scene in the past year and is even currently partly sponsoring a show on Russian “shamanism” at The National Arts Club (which I fully intend to cover as well). And, let me tell you something, they have delicious finger-food at their openings! Yummy yummy!