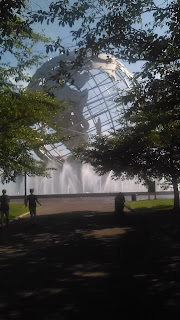 
At the Queens Museum there is a show revealing how the use of media as part of the message can become a significant or integral factor in the interpretation of artistic pieces. In this show the medium itself comes to the forefront and adds an extra dimension to the interpretive process. 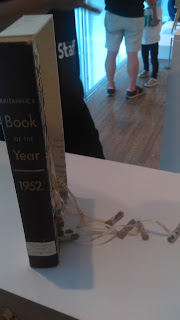 Sun Young Kang creates what is often called ‘book art’. So, for instance, she takes a Britannica Book of the Year for 1952 which apparently was badly damaged and partly gutted, includes a simple Korean text in lieu of hundreds of pages and connects some of the shredded pages to little glass vials. I’m assuming the choice of a 1952 Book of the Year has to be significant for a Korean artist. This was a horrific year in the Korean War. Basically this was the year when both sides dug in, a la World War I, and an unresolved and perhaps unresolvable situation emerged on that peninsula. From 1952 onward, Koreans were forced to abandon all hope for unification and South Korea went into a long, agonizing survival mode, run by often brutal dictators. 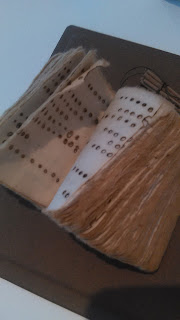 Before I knew what Kang intended I thought she had deliberately gutted the book and it represented to me what we readers do when we read  – we significantly alter our books: they contain more or even different things from what the author intended after we have read them; we change our books through our individually engaged readings of them. Vials often hold medicinal products and to me could hold out hope for a resolution of the division plaguing her country or the vials could represent hope for healing or the need for an external agent to calm and soothe the suffering one feels learning about Korea’s tragic history.  I’d like to think that the vials contain the by-products of the process involved in a reader engaging a text – a sort of elixir developed by really getting into a book. We are not just absorbing info when we read, we are analyzing, disputing, aspiring, altering our perceptions and beliefs and affecting change to our motives and emotional responses. To me the vials contain that stuff. As Kang explained however, “The remnant of the book from 1952 reminded me of what happened in my own country (and even in the USA)…The book obviously was not readable and missing its story. This spine piece was for me the ‘presence of absence’... Also observing the bottles with mysterious stuff made me think that they contained the lost story. What I did was make this book object with found objects and recreated the missing stories and regained them just as memories do in life after our losses.”

Kang also shows nifty little hand-made books into which she has burned holes in the pages using incense sticks. Of course, incense is used among some Buddhists to help their prayers rise into the sky to reach the gods. Burning little holes into the paper can represent, therefore, moments of connection with the god-like or the spiritual. These burned holes become inexpressible markers of insights and spiritual union. 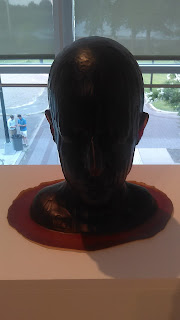 {{{really sorry about the bad lighting}}}

Arlene Rush is interested in using casts of her own head and facial features to examine and experiment with the concept of ‘sameness’. The 2 pieces are actually samples of some of Rush’s earlier work. In these pieces she strives for a type of androgynous look and feel which is non-specific in regard to gender and ethnicity.  Rush seems to wish to thwart the viewer’s interest or proclivity in seeking out and finding specific facial features that might reinforce a person’s preconceived prejudices about various types of people. She wants her casts to be metaphors for a basic type of humanity which is shared by all. She thus makes the viewer more aware of a common process by inhibiting the process and creating a strong desire for it. She questions the efficacy and ethics of our continual attempts to, basically, endlessly profile each other. 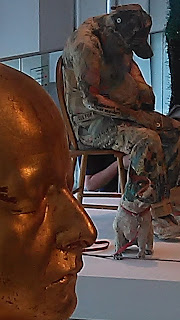 {{{closer view of a head by A. Rush with a work by Will Kurtz in the background}}}

It’s a thought-provoking concept to try to wipe out your own gender and race/ethnicity but is there really a ‘universal’ or prototypical and non-ethnic look?  It might be more likely that we get the ‘blond-haired, blue-eyed’ Jesus phenomenon – the most dominant culture group sets the standard for what’s supposedly objective or non-ethnic. I’m not sure there is such a thing as a non-ethnic person and this might also be a point that Rush is making. In email she explained she was shooting for a “universal self” exploring “…an ontological question.  The perception of reality and the notion that we ultimately are all the same: wanting to be happy and not to suffer.”

To me, if it’s impossible to wipe out visual character traits, we simply have to be aware of how we search for them and how pernicious this process can be.  Rush is also interested in the concept of the ‘unique’ self and questions the extent to which any of us who are socialized into whichever society can truly be unique. To what extent can we break away from the herd we were born into? Spinoza once wrote that people believed they were exercising free will merely because they were conscious of their actions. Perhaps we believe ourselves to be individuals merely because we are aware of our existences. 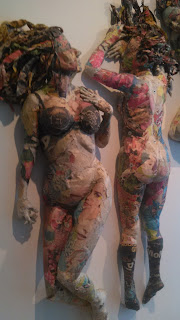 Will Kurtz makes life-sized figures of humans and animals – often marginalized folks with their pet dogs – out of newspapers, with an internal wood and wire structure.  In his artist statement he writes that he wants to reveal both the ‘resilience and vulnerability’ of these folks to create empathy with them. He likes adding the element of the marginalized person’s dog or dogs because of the ‘innocence’ the animals bring to the situation.  The innocence and raw energy of the dogs is, in fact, often a stark contrast to the hopelessness and learned helplessness of the human companion. The dogs could also, I’m guessing, serve as symbolic proxy figures for the people depicted – they might represent the inherent value and dignity of the person, the pure, guileless core of the person which makes the person worthy of our concern. 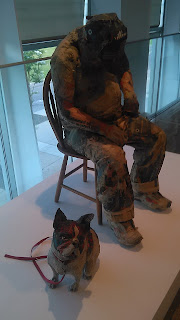 Newspapers, like the folks depicted, also have the function of soliciting empathy from us – often we read of suffering around the world that we feel helpless to address on an individual basis. The use of newspapers could also reveal the aging process. The date of the stories depicted does not change just as our birthdays do not. Finally the people Kurtz shows are usually the people we see in transition – we see them on the street, in stores, hanging around. To many of us they are of as much value as old discarded newspaper. There’s something separating all of us from each other on very basic levels in our society, and Kurtz’s art seems to highlight that.
Posted by Daniel Gauss at 10:46 AM