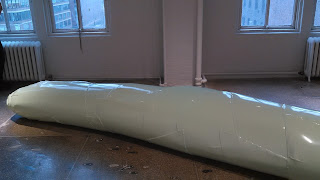 You might look at some of the allantoid and spherically-shaped objects by Franz West (1947 – 2012), at Viana Art, and be tempted to begin your interpretation of them as types of storage containers. That interpretation wouldn’t hold, however, since the shell of each structure seems patched together in kind of a hodgepodge manner, and there’s no way to access the contents – the stuff inside (if there is stuff inside) is layered in there for good. So then you might think, “OK, these things are meant to be some type of garbage disposal units or permanent storage for toxic materials.” No, that wouldn’t work either: why are these things not uniform and mass-produced and why are they painted such rich colors? A good interpretation has to be parsimonious – it has to explain all the elements of a piece as simply as possible. 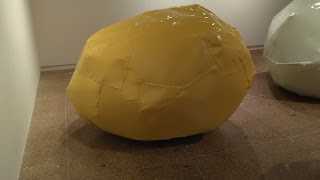 Looking at the figures you might even recall the quote from Matthew 23:27 when Jesus says, “Woe to you who are so committed to demanding that others adhere to religious law! You are like white-washed tombs: beautiful on the outside but on the inside you are filled with rotten bones and decaying flesh.”  For a while I really liked that possible interpretation of West’s work – we see a shiny exterior and the interior could be filled with all kinds of corruption. Indeed, if the figures are so securely bundled up, there’s got to be something nasty in there to someone, no? So the figures could represent our capacity to put a nice bright shiny sheen of moral self-justification on the most corrupt aspects of our lives and actions. 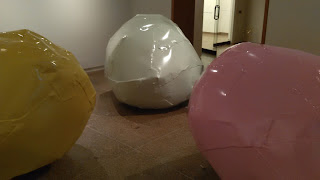 I think the key to unlocking the most parsimonious interpretation, however, lies in the fact that West is depicting a type of ‘bundling’ or covering and perhaps constricting process that probably is meant to approximate something within our inner reality. Through the wrapping process (almost like the layering of medical tape) we lose access to something and it may be wrong to assume we lose access to something malignant.  The beautifully shiny bundling process, indeed, may be the malignant element deceptively suppressing the growth of what lies inside. 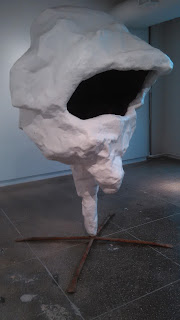 I think the inner contents (or emptiness) and the outer boundary might indicate a two-step process discerned by the artist. Direct experience with the world and others engenders insights involving our motives, desires, emotions, and cognitive processes as well as goals and strategies for further humane development – this is a creative process in which something new about the world and our relationship to it is created and manifested in regard to changes in the way we perceive and act in the world. But in the process of developing insights and being aware of conflicts and obstacles involving our inner processes, we continually engage in the creation of metaphors for our inner experience. These metaphors, like the haphazardly bundled figures, become more tangible than the emptiness left by a lost experience. The creation of a metaphor or symbol for something in the inner world leaves us with a pleasing, tangible but superficial description now divorced from the real pith of life. Yet, the development of symbols for the inner world can either signify the culmination of a process of growth, or the constriction of growth through an over-reliance on symbol-creation and an under-reliance on diving into ourselves deeper and deeper. 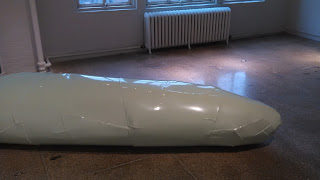 We are now left with these immutable objects where materiality becomes a surrogate for the creative artistic process itself - the perception of the difficult to discern and the creation of external markers to be recognized by our fellows. I like to think of West’s objects as being empty (I don’t know whether they are – when you go to check them out you might be able to tell better than I was able to) because the overall work of West leaves me to believe that he was an optimist. In some of the work at Viana I believe we see the markers of a life of meaningful engagement with the world and the contemplation of our interface with the world, now shrouding the type of emptiness exalted in various accounts of the most arcane religious mysticism.

I would highly recommend that everyone drop by Viana Art to see the work of this renowned Austrian artist. Viana has an amazing space and in virtually every show they use it spectacularly.


vianaart.com
Posted by Daniel Gauss at 1:31 AM