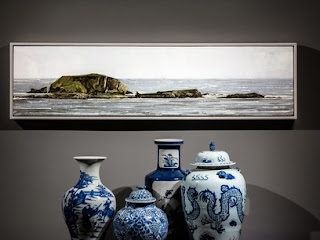 While over one million people starved to death in Ireland from 1845 – 1850, boatloads of grain regularly arrived from Ireland, through the port of Liverpool, to feed the citizens of England. The Irish people had been colonized by the English and most Irish worked for various wealthy (mostly English) landlords who never even considered stopping the transport of food from Ireland to England so that the Irish themselves might be saved while the potato crop was decimated by a fungus. The tenant farmers who were dependent on the potato starved while the wealthy landowners reaped tremendous profits from the Irish grain they exported. This was free market capitalism at its most transparently inhumane, but it has come down to us through history whitewashed as the potato ‘famine’. Yet, a famine is when there is no food – there was an overabundance of food…the Irish just weren’t allowed to eat it. 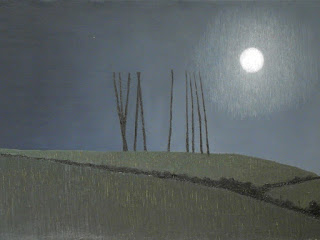 John Kelly was born in England to Irish and English parents who raised him in Australia. He now lives in Cork where the Great Hunger was especially horrific. Discovery of a letter written to the Times of London by a witness of the Great Hunger in his region lead Kelly to realize that no visual record of this tragedy existed in the art of the time. Actually, this shouldn’t have been all that surprising, since, until the French Revolution, the only suffering in Western visual art was the suffering of Jesus, some martyrs, souls in hell and maybe some mythological figures being punished for arrogance.  Suffering depicted in art due to social or economic or military oppression is non-existent until after the French Revolution and, even after the French Revolution, when artists could choose their topics for the marketplace, independent of patrons, they often chose what would sell. Real, gut-wrenching suffering that motivates social action doesn’t sell to art buyers. 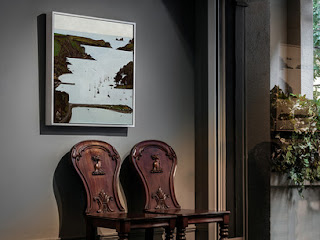 Furthermore, the suffering depicted pre-French Revolution was meant to awe and inspire and fill the viewer with admiration and veneration, not a sense of outrage. This type of suffering is even, at times, very sensual - to the point where Renaissance and Baroque suffering does not only not encourage us to connect and empathize with victims, but, in fact, it encourages us to become sexually aroused by them (the Japanese writer Mishima had his first orgasm while looking at Guido Reni’s St. Sebastian). You need to stylize and sexualize suffering in the visual arts to make a buck from it. 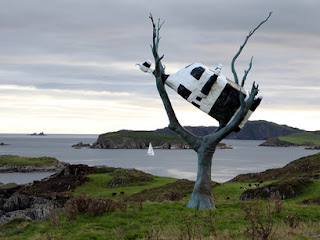 {{{Kelly enjoys referencing the papier-mache cows made by William Dobell in WWII, which were placed near Australian airfields to confuse Japanese pilots into thinking the airfields were really farms. This piece represents a cow stuck up a tree after a flood.}}}

Kelly’s response to all of this seems to be non-linear but relevant and meaningful. He turns to landscape painting and the true horror to be derived from his paintings is that no trace of the horror can be readily found. The High and Low Islands which bore witness to the suffering on shore look tranquil and inviting. This peace, beauty and sublimity demands, however, a strong response. The Marquis de Sade once said, “Every death, even the cruelest death, drowns in nature’s indifference.” 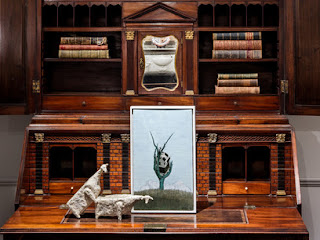 In response to this indifference (which parallels the indifference of the English upper classes who nearly committed genocide against the Irish), we are required to speak out and remember the atrocities that both nature and our system of social classes tend to swallow up or wipe away. So through these landscapes Kelly is not looking to validate a historical record or collect and present evidence. Yet, there is a palpable reverence and sadness and evidence of a personal act of compassion and deep sympathy for the loss of life that has never been fully acknowledged by the English government or our history texts. In the painting ‘Sticks (Moonlight)’ (pictured above) Kelly references this sense of reverence by painting what is left of artist Susan O’Toole’s site-specific sculpture ‘Tree Sentinel’ – originally 18 long tree trunks or ‘sticks’ fixed into the ground in Cork to commemorate the Great Hunger in the early 2000s. 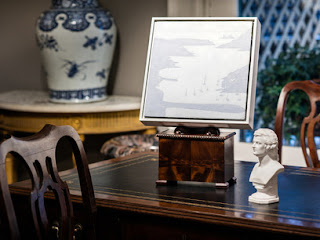 Indeed, if we look at the paintings themselves, this seems to be landscape painting divested of any sense of romanticism or transcendence. It could be argued that landscape painting is, in itself, very ‘pagan’, hearkening back to a desire for union with Arcadia, very pre-Christian in its orientation, shooting for something non-Christian, non-allegorical and something that winds up on the canvas which has not been mediated through the intellect.   I would call Kelly’s work a type of ‘secular’ landscape – the painting technique seems affected by the knowledge of what happened on the land. You don’t have the soft blurriness characterizing the English Romantic painters – each aspect of the landscape is clearly delineated from other aspects…sea, sky, land…we see the landscape but might struggle to be affected by it in the way that we have been affected by landscape in the past. 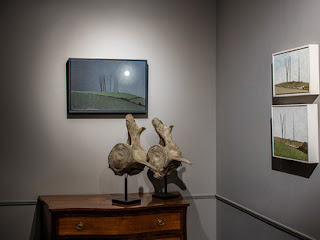 This is landscape that swallows up human suffering instead of landscape of a harmonious, balanced and timeless mood. Yet, we can also feel that this is sacred landscape and the silence does not have to be the forced silence imposed through the censoring of history text books and the oppression of thought by dominant economic classes…it can be a silence of deep and moving reverence and horror for those who were abandoned by the world to inhumane and tortuous deaths so that some could live in economic comfort at the expense of others.

The show was curated by Seol Park of Spark Associates Art Management and it is currently being held at O’Sullivan Antiques at 51 E. 10th Street, New York, NY until October 15th, 2015.
Posted by Daniel Gauss at 2:01 AM