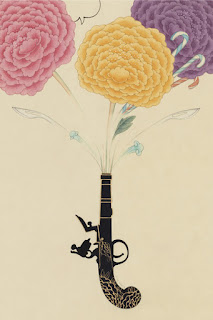 Seongmin Ahn is influenced by Minhwa art – a Korean folk art that has traditionally represented the experiences and desires of the common people, revealing insights only the people could know about life and society, but which would never be publicly promulgated through the media of the dominant culture. There is often sarcasm and humor in Minhwa, and perhaps some secret social symbolism and criticism, as with magpies mocking vicious and powerful tigers who suddenly look stupid and ridiculous. Minhwa is basically the raw, insightful and passionate ‘real’ people attacking the established and respected hacks who control things through connections, quid pro quo arrangements and whatever other forms of shadiness they can think of to try to seem relevant and important. The tigers aren’t really tigers in Minhwa, they are buffoons just as the aristocracy and power-brokers were, or have been, overwhelmingly, buffoons. 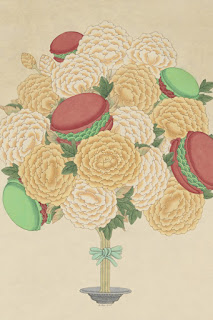 The paintings also manifest strong and unusual eye-popping colors, in contrast to more academically or socially approved art in Korea since the seventeenth century; the colors perhaps reflecting a greater vitality and love of life found among the people than among the (self-proclaimed) intelligentsia or aristocracy. Apparently you see a lot of Minhwa inspired art on cell phone cases and wall paper these days in Korea. 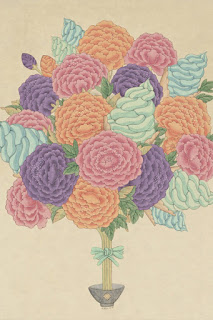 The current show at Art Mora in Manhattan’s Chelsea art district features three types of pieces by Ahn. The most interesting to me were her “Inter-relation_Selfie” series in which we see guns pointed upwards spewing forth various candies and ice cream cones along with lotuses or peonies or some types of flowers, along with an empty cartoon speaking box.  In the notes to the show Ahn states these paintings could represent her or her personality and inner conflicts between aggression and sweetness inherent in anyone.  To me these paintings work better as a visual representation of how paradoxical and bizarre our conceptions of spiritual development seem when we are forced to try to put them into visual imagery. They can also represent a type of synthesis of Western and Eastern conceptions of spiritual development. 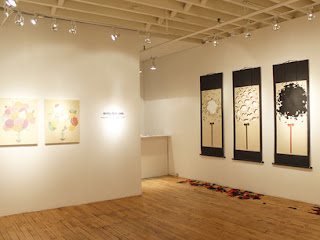 In Eastern philosophy, enlightenment or deliverance can occur through non-violent reflection. In the Western tradition we like to think of fighting with demons and spiritual warfare where the mind and body are at war with each other and we are compelled to forcibly remove a recalcitrant evil from ourselves. There are military metaphors for spiritual warfare – gird your loins with truth and put on the breastplate of righteousness (as Paul advised). So the gun is the weapon to destroy the evil within us, we get that from the Western tradition, but the trigger is never pulled…inexplicably the gun, through some mysterious first cause, erupts into ice cream and flowers (representing in a humorous way the non-violent Eastern tradition). The empty cartoon box represents both the impossibility of articulating the process that happened and the fact that such development occurs beneath the level of language. So this too is in the Minhwa tradition – Ahn could be mocking the established formulas for salvation through these paintings. 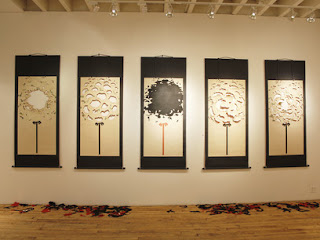 In Ahn’s other two series she uses the peony, which in Minhwa often represented prosperity. Ahn explains in her statement that peony paintings were often hung in the rooms of girls to help them secure prosperous lives. We see that petals from the peony have been cut from the pieces and lie scattered around the gallery floor, perhaps expressing disappointment or disillusionment with what one expected or felt was due to one. 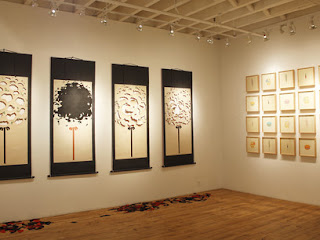 Finally in the Peony Pot series, Ahn attempts to portray a whimsical situation in which a teeny pot can paradoxically provide an overabundance of anchoring material and nutrients for a huge peony to grow.  The pot defies our expectations, the counter-intuitive occurs, but overall it seems natural given that it too can be a metaphor for spiritual development.  What ‘feeds’ or nourishes our inner growth? This is entirely insubstantial yet huge in its implications and effects on us and the world.  The show ended on 7 October. 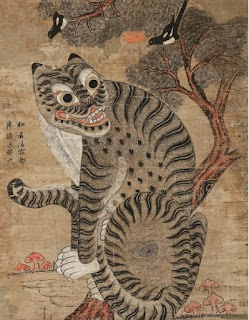