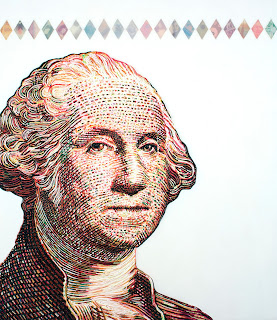 George Washington knew a thing or two about money. Actually, like most Virginia tobacco farmers, he knew how to borrow it, live lavishly on it on his slave plantation, and not pay it back to his English creditors. The historian who wrote the book ‘Tobacco Culture’ postulated that Washington and other Virginia farmers supported independence so much because it was the only way they knew of to get out from under their debts – nothing like a revolution to cancel the money you owe to your ‘oppressor’. As president he appointed Alexander Hamilton to run the economy and, basically, Al took care of things. When you run a slave plantation, you learn how to delegate jobs well. 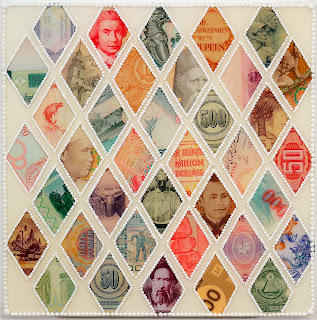 But George Washington, along with a number of other dignified looking bozos, is on our money, and, in fact, the people who wind up on money and the reasons they wind up there seems to be the basis of the eye-catching paintings by Lisa Alonzo at the Claire Oliver Gallery. Unlike artists in the past who painted money as a comment on capitalism or consumerism, Alonzo is not as interested in the money per se as she is in the propaganda value of the money and the sneaky validation of ideology we see on it. 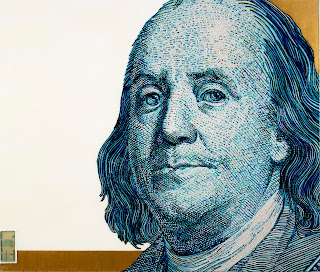 Ostensibly, the use of US government figures from the past on our currency can seem to represent the partnership between government and industry that constitutes our country. Indeed, this might be the government’s lame attempt at convincing us that they control the money and the basic financial operations of the country, despite the fact that 2008 showed, again, they have no control and no idea what’s going on. In regard to state formation, there’s always the question of what is the relationship between the state and industry and how autonomous the state might be from industry and how much control it might have over the business sector. Our currency would have us believe the state is firmly in control. The state has its guys (white guys) plastered all over the money to prove it. 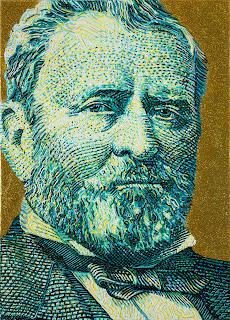 But why did they choose these guys? Indeed, there is a lot of irony in the show. For instance, few Americans know much about Ulysses S. Grant’s two presidential terms. His administration is considered one of the most corrupt in the history of the country. It was during his administration that the Credit Mobile scandal occurred as well as the Black Friday of 1869 which led to an economic crisis. So throw him on the $50 bill. Why? I don’t know, he has a nice beard and looks presidential? He fought to free slaves as a general but continued the genocidal war against Indians as president – Custer died during his term (some say Grant hated Custer and wanted him to die anyway) trying to steal the Black Hills away from the Sioux after gold was found there. Generally he messed things up for 8 years. Alonzo doesn’t have Andrew Jackson portrayed because I’m guessing that would have been overkill – the guy didn’t believe in banks, destroyed Hamilton’s Bank of America, and kept his money in a box under his bed. So he gets the $20 bill. 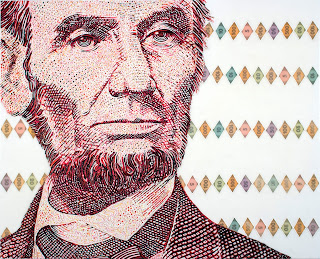 In her notes Alonzo also points out the cavalier attitude Lincoln had toward money – often printing it as if it were going out of style, raising inflation and putting more and more of it into the pockets of the wealthy. In the book ‘Capital City’ we read that while men were dying at Gettysburg, fat-cat bankers and industrialists were covered in diamonds on Wall Street. And isn’t it time for a re-visiting of Lincoln anyway? Some historians have asked whether it might have been possible to resolve the slavery issue through peaceful means (boycotts, diplomacy, incentives) – Lincoln never considered any of this for a moment. He just rushed headlong into war. 600,000 men died in the Civil War (half of all soldiers ever killed in US wars) and after the war was over the folks who had been slaves merely moved from slavery to becoming dirt-poor share croppers for their previous masters. Lincoln had zero plans to integrate freed blacks after the war (he had speculated on shipping them back to Africa) and they became an oppressed underclass in the USA. So throw this guy on the $5 bill and shout hallelujah, Lincoln freed the slaves. 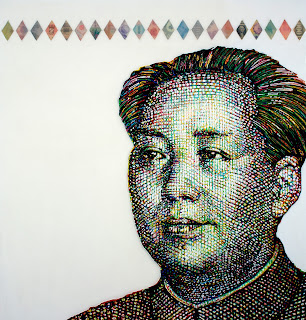 To show that the US is not the only country to do this, Alonzo also has Mao abstracted from some Chinese money: Mao, who may have been responsible for up to 80 million people being killed, and who tried to level his society through the Cultural Revolution. Nice guy for some currency. So even Commie countries put their leaders on their currency to try to make it seem as if the state knows what it’s doing; but how effective is this when the guy was an inveterate butcher? Or is that the point? Are we daily subjected to these folks to acclimate ourselves to their ilk and the processes that put them and keep them into power? 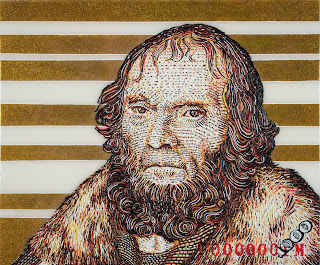 So I guess one big question is, do we even notice these political figures on the money? And, is that the point? The government wants us to tacitly accept the legitimacy of a president like Grant by using currency with Grant on it? They want me to buy into the myth that Lincoln was a genius even though he was responsible for 600,000 deaths? They want me to use a bill with a racist and genocidal maniac like Jackson on it without protest? This is some plan somewhere? Actually Alonzo highlights a process that is all around us – the glorification and lionization of utter mediocrities about whom we know little or nothing. This seems to be at the heart of her money paintings – we don’t know them nor their history, but we accept them without a word of protest or questioning. It’s all part of a docility training we have become accustomed to.
Posted by Daniel Gauss at 8:55 PM