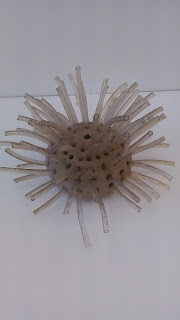 {{{click on images to enlarge them}}}
I loved this little piece by Choucair - are the tubes supposed to expel something toxic or are they supposed to absorb something sustaining (or maybe both)?

In the 2013 Tate Modern retrospective of the work of Saloua Raouda Choucair, there was a painting that had been torn by a bomb explosion near her home in her native Beirut.  One might have expected a Lebanese artist to reference the violence, corruption and suffering of the 15 year Lebanese Civil War in her art. Yet, there seems to be no overt commentary on the war or politics in any of Choucair’s pieces throughout her long career. Indeed, this seems to point to the level of integrity Choucair brought to her art. I am guessing that Choucair’s attitude was that the war was the doing of unenlightened others and she wasn’t going to become engaged in their insanity. 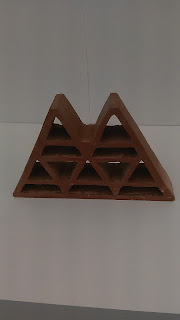 Choucair might have decided that art is simply not about the overtly political and that it should not be sullied by being extended in that direction. Easy artistic attacks against transitory corruption (which might have made her more famous as a ‘regional artist responding to her times’) were a temptation she easily resisted – instead she was interested in the pith and essence of the extent to which art could capture the process of what is most meaningful and eternal in our lives. 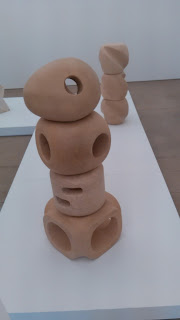 The press around the 2013 retrospective highlighted that Choucair was one of the first artists, if not the first, of her region to begin using the techniques of contemporary abstraction. After moving to Paris after World War II, she studied at the atelier of Fernand Leger and became fascinated by the architecture of Le Corbusier. Upon returning, a few years later, to Beirut, however, it became difficult for her to show and sell her work – in part because she is a woman, in part because the work was so groundbreaking. Ms. Choucair, who is now 99 years old and suffering from Alzheimers, worked in relative silence and obscurity for decades amassing her collection in her own home (her daughter has tirelessly continued to champion her mother’s work). A curator for the Tate Modern stumbled upon her work while looking for promising Lebanese artists and, upon discovering the extent and breath of the work, immediately began organizing the retrospective which finally brought attention to this amazing and significant artist. CRG Gallery, on the Lower East Side, now represents the artist in New York City and has put together a wonderful first show for this artist in the USA. 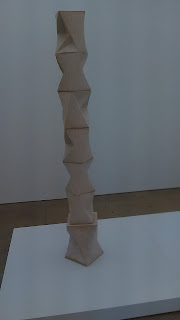 To appreciate Choucair’s art it’s important to know that she was influenced by contemporary science, mathematics and the philosophy of Sufism.  The basic components of her work would seem to involve symmetry, line and curve and what she expresses comes from her experimentation with these elements. Her work also uses the principle of repetition which she may have taken from her study of Le Corbusier’s architecture. Much of her sculpture is, for example, ‘modular’ and it is even possible to rearrange the components of her sculpture. This also mirrors Sufi poetry in which each stanza is supposed to stand alone as well as be an integral part of the whole poem. 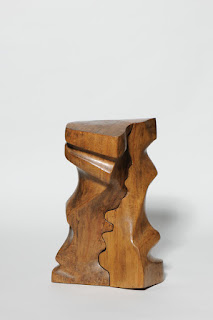 In a letter from 1951, she states that one of the greatest contributions of Arabic scholars to the world was the idea of ‘distillation’. Wine was first distilled into purer or more potent ‘spirits’ in the Arabic world in the 900s and she points out that distillation is merely the process of returning substances to their true or original nature or ‘essence’.  The essence of life is repetition as it is, to a great extent, in Sufism – one who experiences a higher awareness necessarily becomes an influence in the world for peace and justice and kindness and mercy. 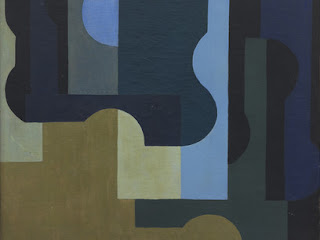 Choucair was based in Beirut for most of her life but was continually open to the progress going on in all parts of the world and this often made its way into her art. When a critic once asked her whether she was merely imitating European styles, she stated, “What I experience, everyone in the world experiences.” There wasn’t just regional or continental progress or innovation; any change or development from anywhere could and would become a global influence in Choucair’s eyes. This neglected artist was, in fact, an early believer in a more global and more universal outlook in which borders might be dissolved and humanity might become unified in its common search for what is most worth pursuing. 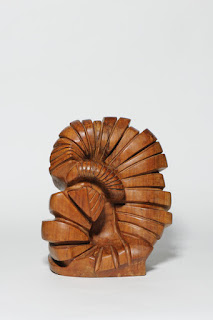