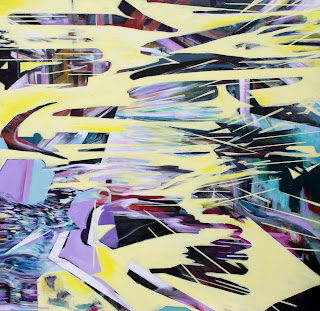 Few Americans realize that, even before the Vietnam War, the United States was involved in a horrific military conflict in South East Asia. Indeed, during the 1960s and 1970s Laos became the most heavily bombed country in the history of the world (260 million bombs were dropped, of which 30% did not immediately explode). Bombing campaigns funded by the U.S. on behalf of the Laotian government and Soviet military support of the revolutionary Pathet Lao displaced more than 1 million people in a country of 2.5 million, in a civil war that would ultimately be won by the Pathet Lao. 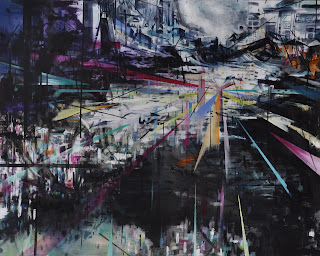 UXO - Laos
To this day Laotians suffer from the effects of this war – 20,000 people have been injured or killed from explosions of previously unexploded bombs (50% of them children) and babies are still born with physical and cognitive disabilities due to Agent Orange. The country remains severely underdeveloped (75% of the 6.7 million citizens of Laos are either poor or subsistence farmers). Laos was the first domino to fall in a situation that did not yield the cataclysmic results for international freedom and capitalism feared by President Kennedy; yet, the adverse results for the people of this country have been substantial and long-lasting. 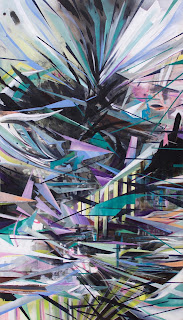 Ho Chi Minh Trail
Sisavanh Phouthavong-Houghton recently had a show at Tinney Contemporary Gallery in Nashville, Tennessee dealing with the legacy of this war. Phouthavong-Houghton’s father was targeted by the Pathet Lao for execution, as a doctor working for the American-funded Red Cross, so he escaped with his family from Laos through Thailand, finally coming to the U.S., being accorded asylum by the U.S. government. In the USA, to support his family, he was forced to do factory work for the rest of his working life. Phouthavong-Houghton arrived as a 4 year old refugee with her family, is now married with two daughters and is Professor of Art-Painting at Middle Tennessee State University, Murfreesboro, Tennessee. 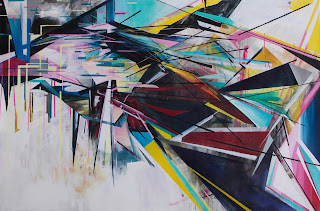 Phouthavong-Houghton had wanted to address the issue of the Secret War in her work and had gone as far as attempting small works based on drawings made by the victims of the bombings, but this never worked out to Phouthavong-Houghton’s satisfaction. A turning point and impetus to finally address this topic, head on, came after she met Channapha Khamvongsa, founder of Legacies of War, at the LAO Writer’s Summit in May of 2016 in San Diego. The genesis of this current series derived from how Houghton was affected by the sharing of her Laotian heritage with numerous other Laotian professionals passionate about a cause meant to help the Laotian people, even though most at the conference had been raised outside of Laos. 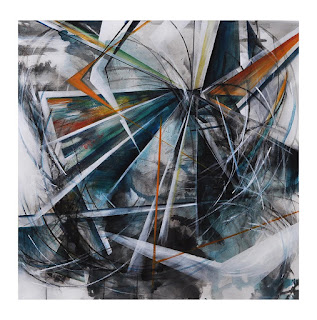 Phouthavong-Houghton told me, “This work does explore the challenges of being a refugee and an immigrant, no doubt about it, from the gestures, movement, hard and soft edges, imagery and traditional Laotian colors.” Her current work, to me, represents both a fragmentation of landscape and experience due to the imposition of a type of utilitarian logic which justifies cruelty and brutality in the pursuit of dubious political ideals.
Ho Chi Minh wanted a unified country and was willing to take massive loss of human life for that ‘greater end’. The Pathet Lao gratefully accepted North Vietnamese aid to create a horrific civil war to bring a type of socialism to Laos which has limited the country’s participation in the global community. President Kennedy feared that Asian countries would fall to Communism like dominoes and supported a massive bombing campaign in Laos at the same time he propped up a corrupt government in South Vietnam. Lyndon Johnson faked a crisis at the Gulf of Tonkin to convince the Congress an escalation of war was necessary. 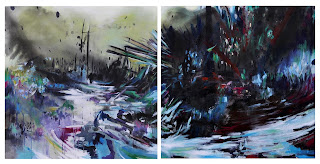 Plain of Jars
Everyone had a reason to displace and slaughter hordes of people who wanted nothing but to live peacefully with their families. Phouthavong-Houghton’s work is, therefore, relevant for today in that this same type of logic is still applied to foreign policy decisions yielding the same inhumane and unacceptable results. Was it really necessary for the US to support a civil war in Syria which has led to 400,000 dead and another refugee crisis? 12,192 bombs were dropped by the U.S. in Syria in 2016. Did our leadership attempt any novel or humane solutions, or did they just resort to this same type of anachronistic approach, which always seems to yield inhuman and barbaric results?
If we look at the best anti-war art, we see a lot of what Phouthavong-Houghton is doing, with the big difference that she has had the courage and integrity to take the next step straight into pure abstraction, leaving explanatory figuration for the abstraction behind. While looking at her work I realized, for instance, that if we look at David’s Oath of the Horatii, a strong anti-war piece, it is dominated by sharp, piercing angles formed through the three dangling swords and rigid arms obliquely elevated in a pledge to engage in senseless battle. We see this piercing fragmentation as well in, for example, Otto Dix’s Das Geschütz (1914), in which he presents a massive piece of German artillery (looking like a converted piece of industrial machinery) surrounded by acute abstract patterns. 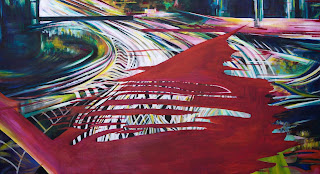 Resilience
Interestingly, Kandinsky’s Improvisation #30 (1913) is not pure abstraction either, in that it presents two canons in the lower right corner as the source for a crumbling of figuration in the apparent depiction of a battle affecting a city and a group of people. The war pieces by Leonard Rosoman and Paul Nash sometimes have this characteristic splintering and rending of figuration through recourse to figuration, which we also see in the ultimate piece of anti-war art – Guernica. These are the cold, sharp, shattered, disunited angles generated by the type of logic that is continually employed to wreak destruction on populations for an allegedly higher end. 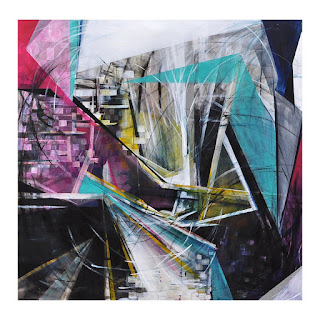 Unthinkable Randomness
While discussing this, Phouthavong-Houghton commented, “Yes, it seems fitting that you bring up Picasso’s Guernica. The tension, broken up planes and abstracted figures is similar to the way I am working with landscape. Also, my hope for the viewer is that even if he/she does not know anything about art, the viewer will get hit in the face with bright colors, chaos, movement, confusion, become discombobulated because that is how my family and all refugees and immigrants feel when they move to a country where they don’t speak the language, know the terrain or even the culture. Most step into darkness hoping to find their footing and a path that will lead their kids to safety, hope, and opportunities they could not provide them in their own native war-torn country.”