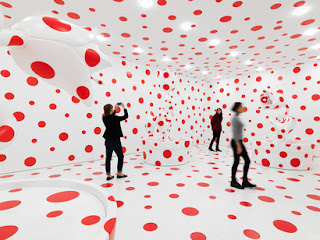 The concept of infinite repetition is a center-piece of Kusama’s work. As a child she suffered brutal treatment at the hands of her mother and visions of the infinite appeared to her as a consequence of this suffering. Therefore, the essential element of the artist’s identity and work might be understood as an ordered and systematic response to cruelty which takes the form of a vision of infinite perfection that can cover the universe (and sources of pain within it) but not change its nature. 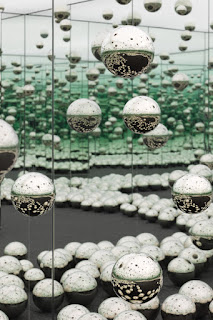 This approximates, perhaps, the vision we tend to have of therapeutic recovery or the elimination of psychological pain. When one reaches a state of peace, where one can deal with memories and actions that once caused inner pain, the once external causes of pain become harmless. Kusama renders benign all possible elements that might cause pain, through her patterns. She has even covered herself and others in polka dots, in the past, since we are the chief source of pain to each other. 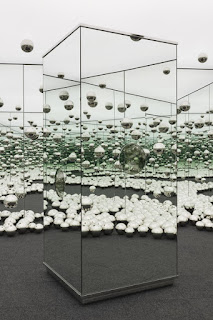 We live in a universe which had a birth and which will have a death; a universe for which the questions: "How could something come from nothing?" or "How could something always have been?" cannot be answered. We live in a constant state of entropic decay and our lives are a continuous struggle for self-justification and a search for meaning and validation in a dream-like, grim and often ridiculous state. This too becomes benign and these questions are muted by the polka dots. 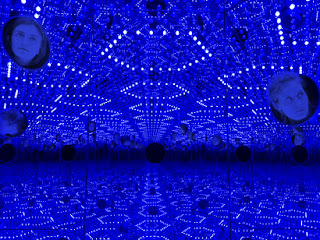 Perhaps this is why the artist has said repeatedly that her art is an attempt at self-obliteration. The infinity of the polka dots is an offering to her public, an offering of a therapeutic obliteration for those of us suffering due to the callousness, indifference or outright cruelty of others. The creation of her pieces allows the submerging of her identity into a meaningful process, revealing the source of psychological pain to be based on rigorous attempts to retain identity and selfhood in lieu of surrendering ourselves to the goddess of mercy. In the very creation of the polka dots, in her effort to offer peace to others, Kusama surrenders to compassion and this, alone, eliminates her pain. 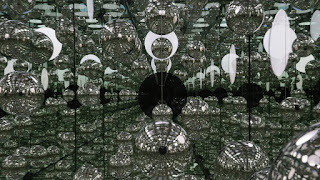 In the creation of an infinity of dots there is a loss of self which subsumes the component parts of humanity and the universe which cause pain, replacing them with a deep understanding and mercy which destroys the essence of pain and is reflected in a self-generating and endless pattern. Kusama is saying that forgiveness is possible, an end of suffering is possible, we no longer have to harm or be harmed. The polka dots are a forceful “NO!” to being in complicity with that which causes pain; we refuse to be either victims or victimizers. This is also why the artist’s work is often performative in nature. The process involved is essential to the work, not the final product. The artist David Judd once even went so far as to say that a painting by Kusama is a result of her work and not a work in itself. 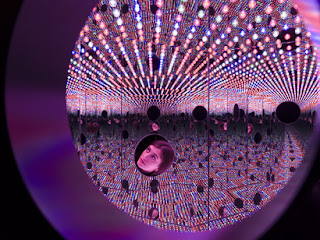 This also helps to explain why Kusama's spaces in galleries, especially in NYC from 58 to 68, have been totally defined by art. It was her desire to create entire environments of repetitive patterns because this is the type of life we need to surround ourselves with. This is what the world might look like if we reach that stage of remission and kindness. We can insulate ourselves in these benign patterns and attempt to structure a world accordingly. These are not the patterns from Marat through Marx to Mao that have been tattooed onto reality to forge new forms of corruption. 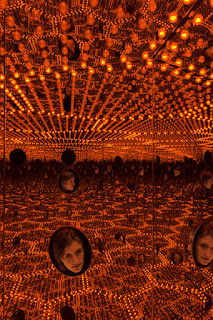 Kusama’s work also follows from her observation that clusters predominate in nature. If you go to a field you often see clusters of flowers and if you look to space you see clusters of stars forming clusters of galaxies forming clusters of super-galaxies. In nature, clusters of flowers form because they are competing in a life or death struggle against each other for space and resources. Animals cluster because it improves their survival chances against predators. Galaxies cluster due to fundamental laws of physics concerning gravity and momentum. Kusama’s polka dots cluster for their own palliative reasons – they are as natural as birds, social groups and galaxies.
Posted by Daniel Gauss at 2:52 AM