In many of Tim Vermeulen’s current pieces at George Billis Gallery, we see that inner reflection and a desire to become more humane have allowed his everyman to comprehend the meanings of various religious symbols from various cultures. He has covered and surrounded himself with these. These symbols then seem to become the impetus for him to attempt to fully integrate the meanings of these symbols into his very being.  And therein lies the rub, my friend.  How do you get this stuff inside of you once you conceive of it outside of you? 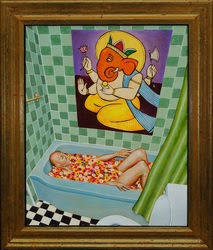 The paintings, therefore, seem to be about the desire and struggle to first understand that some hidden or unspoken process of self-development exists (and is codified through symbolism and allegory) and then to struggle to find some way to internalize the basic potency and meaning of the symbols one was first able to understand and value.  We see evidence of a severe, desperate and sometimes semi-ridiculous process.  Indeed, at times the artist seems to be questioning the effectiveness of the process.  This is interesting since many people turn to art for the same reason – I know I do. We hope something in a painting will trigger an insight or something meaningful will lead to significant and beneficial change in ourselves.  The big question in Vermeulen’s show seems to be: of what value is symbolism as a transformative means? By default, he could also be asking what transformative value art itself possesses. Can symbolism and art change us, or is this just a form of arcane, higher-level self-deception and entertainment?

In “The God Realm” (above) we see Vermuelen lying in deep contemplation in a bathtub filled with small flowers, under an image of Ganesh.  By the way, do you know what aspect of an elephant makes Ganesh so meaningful symbolically?  His big floppy ears can more easily catch requests for help or assistance.  Vermeulen is engaged in a type of ritual seemingly calculated to bring inner change, but is such a symbolically laden ritual effective? Will he emerge changed? 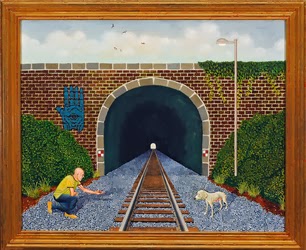 In “Stray” we see Vermeulen taking humane action under the hamsa hand, a truly ancient symbol from the time that magical practices dominated human religion. The hand was meant to ward off ‘the evil eye’ and offer protection.  Is Vermeulen implying that humane action is a type of hamsa hand and the kind man will be protected from harm?  Is this one reason why we act with humanity (when we act with humanity)?  There's other symbolism here, of course.  The dog stands across the railroad tracks, there's a bridge, a tunnel etc. It could be that the painting is about trying to bridge the gap between the 'animal' and 'spiritual.' 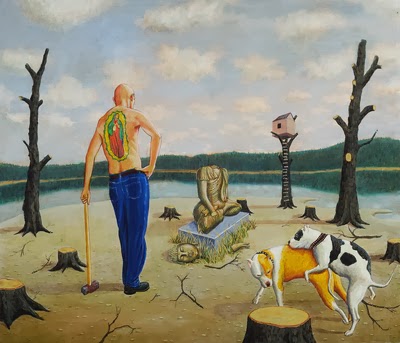 Why does “Animal Realm” remind me of Otto Dix so much?  Vermeulen, bearing the brand logo of the Virgin of Guadalupe, has knocked off the head of a Buddha as two dogs copulate.  This is the type of piece which seems to indicate most forcefully that Vermeulen’s everyman might have become disheartened with his quest and is ready resort to some worldly-indulgence.  This piece seems to be a total rejection of the spiritual quest by one who has tried everything and finally succumbed to a hard truth. (By the way, Vermeulen paints himself as his ‘everyman’ in these paintings.) 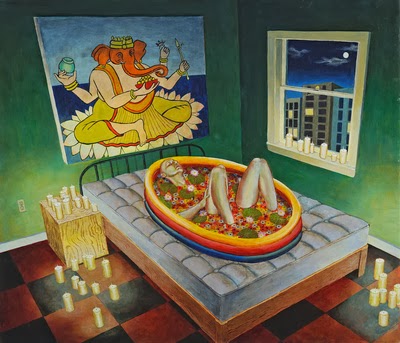 In another version of “The God Realm,” Ganesh is holding different stuff and Vermeulen has added an extra element to the ritual – various burning candles.  Something tells me the candles won’t work. 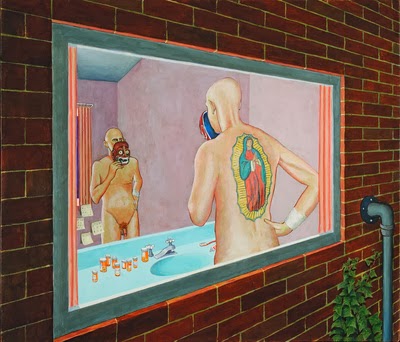 In “The Hell Realm” we see Vermuelen literally staring at himself in a mirror, but gazing at himself through a type of demonic Buddhist mask.  His medication is spread out in front of him and he again displays a tattoo of the Virgin of Guadalupe.  Masks often allowed for the possession of the power of the figure represented.  Vermuelen seems to be embracing the chaos and aggression represented by demons in an attempt to pass through this stage and into a more positive realm of being.  The medication is a good symbol of healthful or beneficial change from without.  The inside of the mask, as well, seems to be a soothing blue color, in contrast with the hellish image outside.
Posted by Daniel Gauss at 10:40 AM