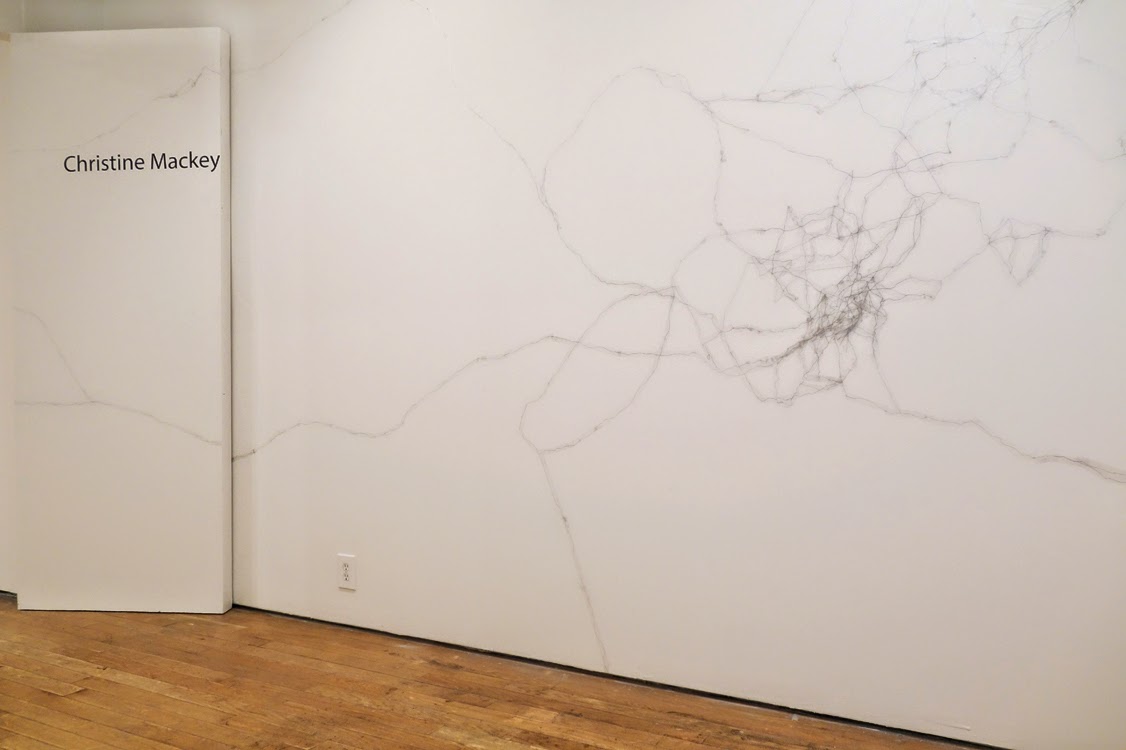 The county you live in, in NY State, can mean a great deal to folks from other counties of the state and provide a way by which you might be judged. For instance, there are 62 counties in NY State. If we look at the overall health of folks in the various counties, the Bronx comes in at 62nd even though one-half of Bronx residents receive free medical care in the form of Medicaid. Rockland County is the ‘healthiest’ county. Rockland has a median family income of $96,000 (4th highest behind Westchester, Nassau and Putnam) as opposed to the Bronx’s $38,000. The next lowest county in regard to median family income is Lewis with $49,000.

Christine Mackey takes pieces of scotch tape and traces sections of the borders of New York State counties onto these pieces from a map. She then affixes the tape randomly to the walls of a room in AC Institute so that she gets a type of wild rhizome or dendritic pattern. In fact, when I walked into the room for this installation, initially I thought I was surrounded by numerous cracks throughout the walls. 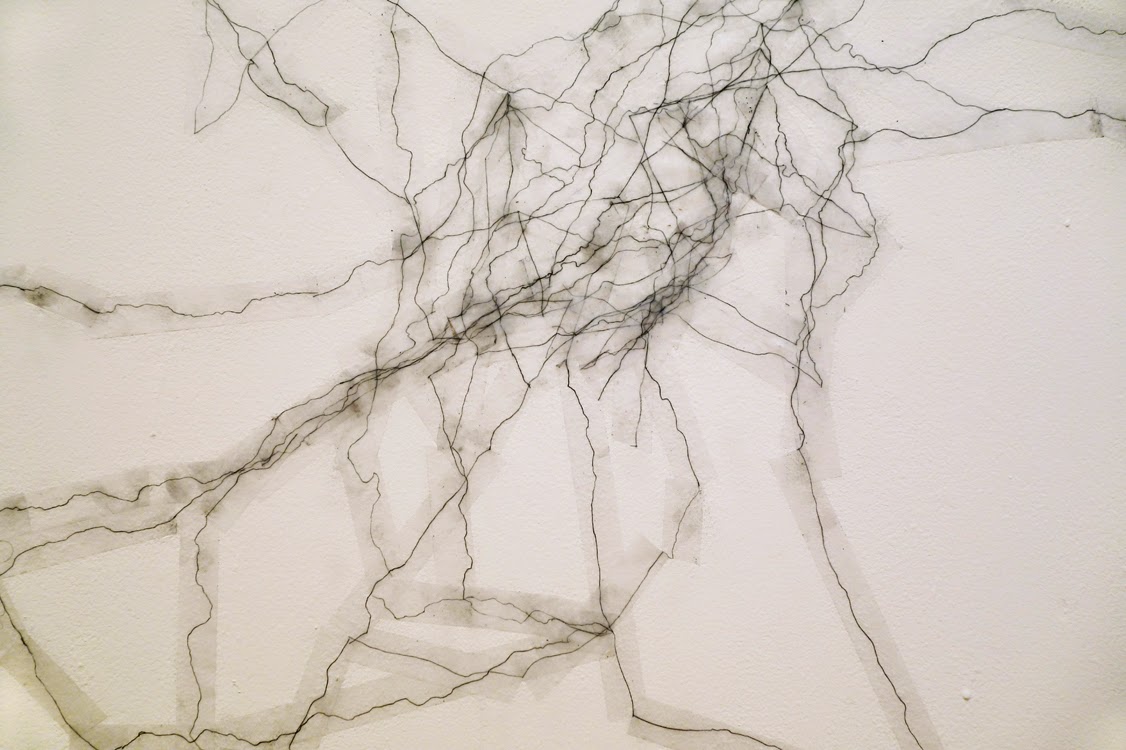 As is the case with a map of NY State, the borders of a traditional map often indicate divisions between cultural or socio-economic groups.  Think about the cultural division between Bronx and Rockland Counties. The borders on a traditional map act as a validation and reinforcement for insidious social and economic processes that have divided people racially, ethnically and economically. Mackey’s rhizome patterns present a vision of these borders fragmenting, inviting a greater mixture and accessibility than before. They highlight how divisions between people within a state can become reified through the map-making process. Once you draw these lines you know where to go and where not to go, you can start collecting numbers and categorizing folks into ‘us’ and ‘them’. In Mackey’s process the map borders used to mean – “You are not wanted here” or “I will not go there”, but now all restrictive connotations are lost. 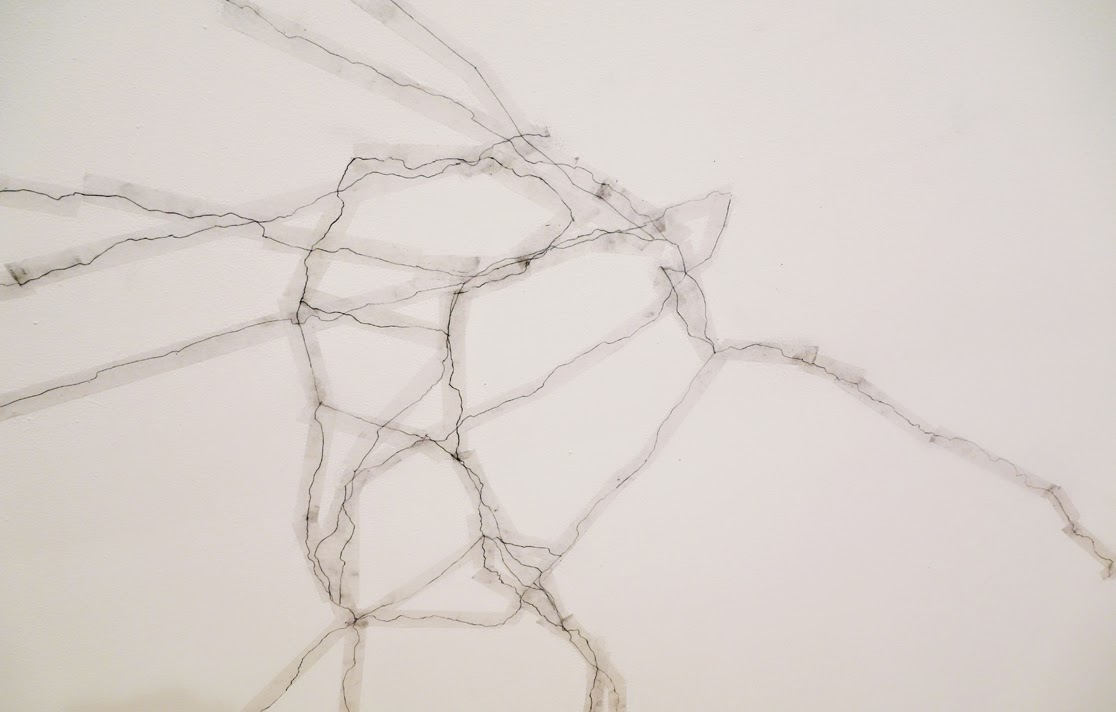 The borders change from barriers to become root-like or dendritic - no longer guided by social or economic patterns but moving in strange contours, kind of like a malfunctioning missile leaving a smoke trail of wild twists and turns. Rhizomes always proceed from some type of node, but we do not see any nodes in the rhizome patterns on the walls of AC Institute – so these are no longer anchored borders, they are no longer connected to race, ethnicity, income: they have become fragile and flimsy or like cracks in a wall or smoke trails in the air. Symbolically then, the map represents something cognitively fixed and predictable and something from which we derive a limited amount of self-satisfying and reinforcing knowledge. To fragment the borders of a map and present the borders as rhizomes, roots or dendrites is to invite a new process of discovery and engagement in which processes that divide us are abandoned and we explore our shared humanity with concern and compassion.