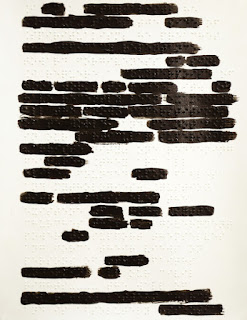 Kenn Kotara - click on images to enlarge them - In this humorous and thought-provoking piece someone has attempted to censor braille script. The futile attempt could represent the deep capacity we have for perceiving the truth regardless of 'official' attempts to withhold it from us. The person being engaged by the braille represents someone being reached on a deeper than normal level and the attempt to prevent the transmission of the information becomes ridiculous because it is on an irrelevant level.

There are a number of mysterious and hard-to-grasp aspects of human language that make it a perfect element in modern and contemporary visual art.  Even if we look at language or text as being linear and concrete, in conjunction with visual imagery it yields more ambiguous and thought provoking interpretations. Text plus imagery, for example, can be used to show and question how social narratives (true and false) are created or reinforced. 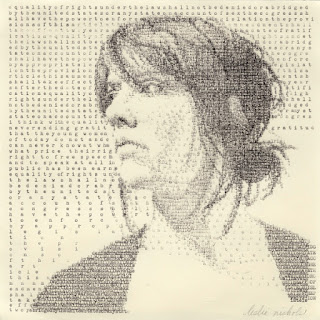 Combining text and images can even challenge the validity or primacy of the perceived world and point back to a deeper validity of inner engagement and experience. Using text in visual art pieces often calls for greater scrutiny as to what language can and cannot do, what we hope it might do and what it fails to do. 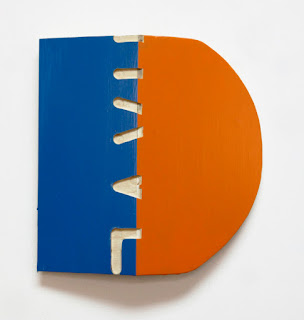 There’s an amazing show of text in visual art currently running at The Painting Center in which the work of over 50 artists is currently displayed. This show warrants a closer look at how language has been used in the visual arts in the past to highlight how some artists might be using it in this show. 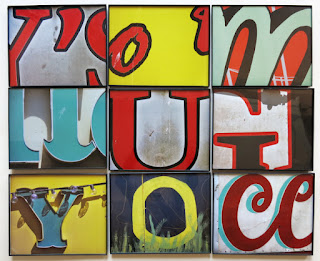 I’m hoping the following overview can put The Painting Center show into greater perspective, since it’s just impossible to highlight and write about all the incredible pieces involved.  I basically chose five ‘famous’ artists to create a type of spectrum of how text has been used in art in the past. I think it would be interesting to keep this context or spectrum in mind when viewing the pieces at The Painting Center.  Along with my text you can also see a few samples from the current show. 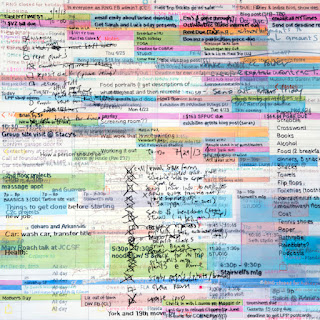 So we can start with Magritte who painted a pipe and under it painted “This is not a pipe”, and we think, this is wrong! This is a pipe.  But then we realize, wait a minute, there’s a distance between the object and any sentence about the object. Language can exist on its own as well as in relationship to an object.  Language is also a thing to be examined. When he says this is not a pipe, we realize the right answer is also wrong and the wrong answer is also right.  This is, in fact, NOT a pipe – the sound and symbols for ‘pipe’ are our constructions. The object exists as something ‘real’ in the world whether we can name it or not. 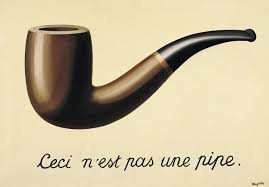 This is not a pipe because language represents but does not ‘own’ the object. Magritte seems to be implying that language can separate us from the world instead of helping us engage it more directly. Indeed, he may even be implying that language can bring violence toward the real object or the real world – real and false labels are both about controlling and using external reality toward some end.

Furthermore, Magritte shows that if we are confronted with ‘misinformation’ we feel an emotional response due to frustration and a very real sense of aggression. We want to change what we feel is wrong. There is some impetus or motive within us to attack what we believe to be falsehood.  This begs the question of how statements not connected to things but to more abstract matters are accepted or rejected and how they can engender conflict instead of dialogue and resolution.

Joseph Kosuth followed from Magritte’s revelation that language is an autonomous thing to be investigated by showing an object, a visual representation of the object and then the dictionary definition of the object. 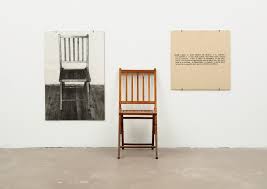 He seemed to be pointing out the difference between a type of functional engagement with something and the extent to which we can transform an object into something abstract either for further investigation of the thing or to better use the thing.  For Kosuth the chair exists in three realms – the real, the representational and the abstract/analytical. Also, when you represent the chair, and make the chair ‘useless’ you are almost forcing a person to look at a chair differently – to look at a chair more as a metaphor or symbol (a la Duchamp).

The chair now becomes the thing you rest on.  It is something stable and comforting.  The chair becomes a symbol of something else.  But the written words about the chair invite deeper analysis of its physical being and its components and, potentially, the factors required in altering the physical environment in the process of manufacturing the object for financial gain. Our reality is comprised, for Kosuth, of direct experience, symbolic interpretation, and analytical description for utilitarian ends.

Jenny Holzer went one step further in word art when she constructed entire sentences and separated them completely from actual physical objects.  People were challenged to look at the statements themselves and to analyze them and explore how the statements made them feel. 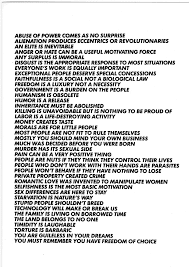 Here Holzer expands further on the awareness that language can take on an existence all its own, separate from the physical world.  Language becomes an extra force in the world that we have to use, engage and deal with every day.

In regard to a statement that is presented as a ‘fact’ or truism, there are, basically, three ways we can deal with the statement:  “Yes” “No” and “I don’t know”.  The statement can be acknowledged as being true, or it can be acknowledged as being false or a person can look at the sentence and not be sure whether it is true or false.  Each of these responses seems to lead to some type of emotional response, just as Magritte’s correct or incorrect words led to differing inner responses.

Holzer’s work also has political implications. Many Americans might not agree that “Freedom is a luxury and not a necessity.”  In some socialist countries, however, it is felt that public safety, equality, stability and public well-being are more important than freedom.  The truth of this kind of statement cannot be divorced from its social context, therefore.  Whether you feel a simple statement is true or not will, ultimately, depend on your own experiences within a particular environment.  As Americans we would say, “Absolutely not!  Freedom is no luxury!”  Yet, in a country based on some type of religious legal system, freedom might even be considered to be something suspicious.  So who is right?  If ‘we’ outnumber ‘them’ are we right?  If we have more power than they do, are we right? Are we even aware of how our beliefs and principles, as reflected in language, are formed and how easily and unquestioningly we embrace ideologies formed by others?

This of course leads to the word art of Barbara Kruger, who challenged the viewer to question his/her political or social beliefs and to rethink values. In her famous “I Shop Therefore I Am” she highlights the fact that we live in a consumer culture and the value we often give to a person is (absurdly) based on his/her capacity to purchase stuff. 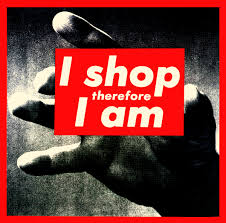 Indeed, our self-worth is often dependent on the items we buy and display to others.  You literally are what you buy to most people you meet.  Indeed, in a consumer oriented society, the amount of power that you possess is contingent on the amount of buying power you have.  Who can forget that for twelve years the richest man in New York City was also the leader of New York City.

Martin Firrell, an English artist, went even a step farther than Kruger by just shooting for a sincerity and direct engagement that rejects the need for any analysis.  Firrell is convinced that by using language he can meaningfully engage others in constructive dialogues to make the world more humane. Firrell truly believes that the use of language can make life better and he earnestly attempts to do this in his art.

Therefore Firrell is not investigating any aspects of language or the relationship of language to objects or images.  Firrell is using language purely to engage others.  He expects everyone to realize the basic truth of his statements and to be moved by them to take greater action in the world. In London in 2009 he projected this onto a wall: “War is always a failure. It means we’ve failed in diplomacy and we’ve failed in talking to one another."

From Magritte to Firrell we see a realization of language as something foreign to ‘reality’ to language as something we don’t need to question but, instead, must use to engage others in meaningful activities. The Painting Center shows that within this spectrum, and even outside of it, artists are still fascinated by the possibilities inherent in using text to add greater depth to the visual arts experience. The show ends this weekend, so please try to stop by this Saturday if you haven’t had the chance yet.