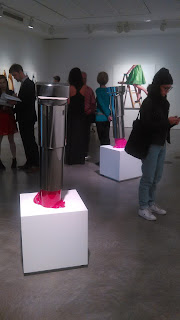 There is pressure on women all over the world to participate willingly in their own sexual objectification, but Naomi Wolf suggested in ‘The Beauty Myth’ that the pressure became more severe instead of less for women in the USA after they began gaining more and more equal rights to men. American men seemed worried that integration might mean INTEGRATION (or something even more meaningful than integration) and that men might lose control over the objects of their fantasies. A tacit tradeoff seemed to be the answer: along with gaining greater equality and freedom and being allowed to demonstrate their professional competence, women were expected to overcompensate for this and maintain an ultra-feminine and sexually seductive appearance to continue to charm and entertain guys. 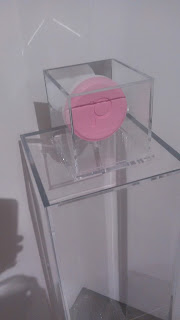 Thus, despite nominal equality, women remained de facto sexual objects while being granted the privilege of doing more complex business tasks on the side. That a male presidential candidate (even an idiot like Trump) might say that a female candidate looks ugly shows how little we have progressed since Wolf’s book in the 90s. Women still seem to be trapped, to some extent, in a bind. 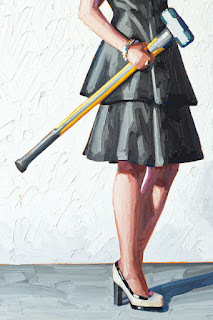 Reemtsen’s women in her current show at De Buck Gallery seem to reveal the impasse they may still be at in American society. She, for the most part, only focuses on the middle portion of the woman’s body.  We can see that the trim and toned woman is beautifully dressed in elegant or even vintage clothing.  The woman is also often carrying some type of heavy tool, like a chainsaw, hammer or an ax. Thus, I’m guessing, we get the title of the show – the woman looks ‘smashing’ and is predisposed to do some ‘smashing’. Unlike in her show back in December of 2013, however, these tools are no longer pink. Whereas women seemingly embraced and feminized these various implements in the previous show, they are your basic hardware store variety of tools now. 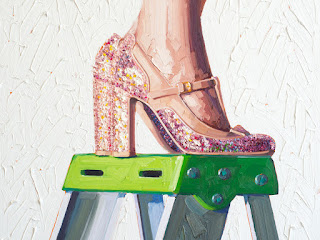 So, is she implying that her characters can now perceive their situations more starkly and are no longer trying to ‘feminize’ tasks created by men (which is what the tools might represent)? Many radical feminists believed that feminism was supposed to be much more than ‘integration’. It wasn’t just women stepping into heretofore male roles and doing what men did. There was a belief that there were feminist values that could transform the world. Feminism was not supposed to be integration, but transformation. So in this show, perhaps, these are women realizing that feminism as integration is a huge error. These women can handle men's jobs, but they recognize them as men’s jobs reflecting values that have harmed society and the planet (notice most of the tools are for digging into the earth and cutting trees), but they still also seemed compelled to aspire to be super-feminine to appeal to the tastes of these oppressive power brokers who established the system into which they can integrate. 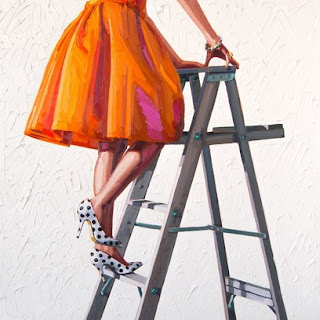 Among the paintings of elegantly dressed women with heavy tools, we also see some larger than life sculptures and paintings of anxiety medication. The actual physical design of the pill becomes highlighted through this method and shown to be a deliberate attempt to be aesthetically attractive to the user.  There’s basically a design principle and branding strategy behind each pill or capsule. The design principle would seem to be tailored to the urbane tastes of well-educated and professional women.  Thus is the psychopharmacological answer to the problem Wolf brought to light in the 90s – this type of life forced upon women is taking its toll. 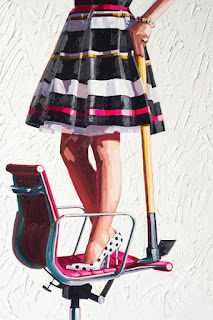 Another change from the 2013 show involves paintings of Reemtsen’s women climbing onto chairs or climbing ladders, and there seems to be more of an emphasis on shoes as well. Reemtsen seems to be alluding to a lot of the talk involving women ascending toward and destroying the glass ceiling, and these ladies are doing so in the most expensive and most feminine of shoes. The implication would seem to be that this may not be the accomplishment many believe it to be, if it involves women embracing values that have traditionally been socially pernicious accompanying values to please and pacify men. 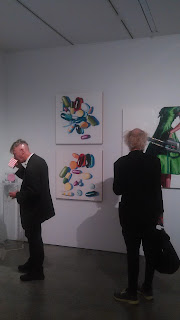 Attacking the glass ceiling becomes a mechanical, greed driven and not ideological process. Indeed, prominent in the show are large tubes of lipstick which have been crushed into a surface the way a cigarette might be crushed once one no longer wants or needs it. The crushed lipstick could be an optimistic element of the show, indicating women who are rejecting corporate values and their own complicity in the ‘beauty myth’. Of course, the ultra-feminine women bearing heavy tools could also stand for a guerrilla uprising. The elegant, vintage dresses would just be a mode of camouflage now that the lipstick has been crushed and the gauntlet taken up. 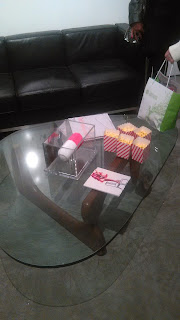 It’s impossible to see the faces of the women who are carrying the various tools, so we really don’t know whether they are happy, sad, defiant, ecstatic...and that’s the point.  Reemtsen could even be implying that the desire to be powerful (holding a chainsaw confers some power) does not, in itself, negate a desire to be feminine (although the crushed lipstick seems to indicate some very disgruntled ladies).  When I read the book by Wolf, long ago, I found it hard to believe that men could be so clever as to offer such a Mephistopholean deal to women (‘We’ll give you worldly power if you’ll look and dress even sexier!’).  Perhaps Reemtsen is saying women never bought into a quid pro quo with the ‘patriarchy’ – maybe the desire to be feminine was a self-choice and buying into corporate culture and attacking the glass ceiling is a fight worth pursuing, or the only fight possible to pursue for women at this time. Maybe destroying the patriarchy is like destroying capitalism – first you give in to it and then it implodes on its own.